The theme of doppelgangers, hugely popular in film and TV at present, usually carries sinister, Gothic associations. This is not the case, at least initially, in British director Tim Wardle's documentary Three Identical Strangers, which spins a tall-but-true tale of identical triplets adopted into different families soon after birth.

The truth came to light in 1980, when two of the three wound up attending a community college in the Catskills. Stepping on campus for the first time, 19-year-old Bobby Shafran was baffled by the affectionate greetings he received from fellow students who mistook him for their friend Eddy Galland, the long-lost twin he never knew he had. All this was strange enough to make the news, leading a third brother, David Kellman, to reconnect with the other two. 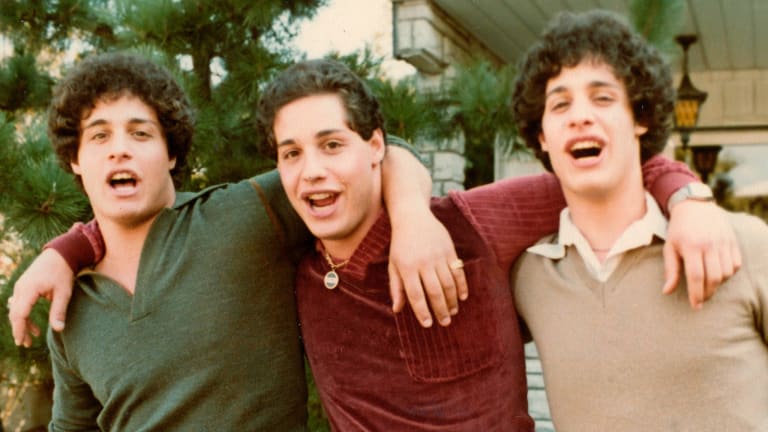 From left, Eddy Galland, David Kellman and Bobby Shafran, triplets who learned at age 19 that they had been separated at birth.

Then comes the only-in-America part of the story. The three became minor celebrities, profiled in national magazines and appearing on talk shows such as Donahue. Bonding at first sight, they proved to have much in common beyond their looks, including an entrepreneurial streak that led them to capitalise on their fame by opening a Soho restaurant called Triplets.

It's easy to see why they won the nation's heart: the clips of their media appearances have a good deal of charm, stemming not just from their improbable back story but from the warm rapport not too commonly shown in public between a trio of grown men. Side by side they don't look as identical as all that, but they're plainly a matched set, three curly-headed guys with strong chins and big, toothy smiles. Individually, any of them could have been played by Jason Biggs in his American Pie days; as a trio, they suggest a troupe of clowns, especially when we see them speaking in unison or simultaneously crossing their legs.

For journalists at the time, the brothers were an ideal human interest story, both touching and bizarre; for a while we might wonder if Three Identical Strangers itself is more of the same. There are early hints that things eventually took a darker turn: most ominously, only two of the three brothers appear to be participating in interviews in the present. But it's not till halfway through that the film's major surprise is sprung, making it hard to discuss crucial aspects of the subject matter without spoilers.

Even after this, there's room for uncertainty about the goals of Wardle's "clinical" approach, transparently modelled on the films of Errol Morris (The Thin Blue Line), which belong to the same "stranger than fiction" mode. Like Morris, Wardle films his interview subjects as isolated talking heads against a neutral backdrop. The reasons for this choice eventually become apparent, but the absence of context is also a drawback, especially since it limits our sense of how far the bond between the brothers has endured into the present. 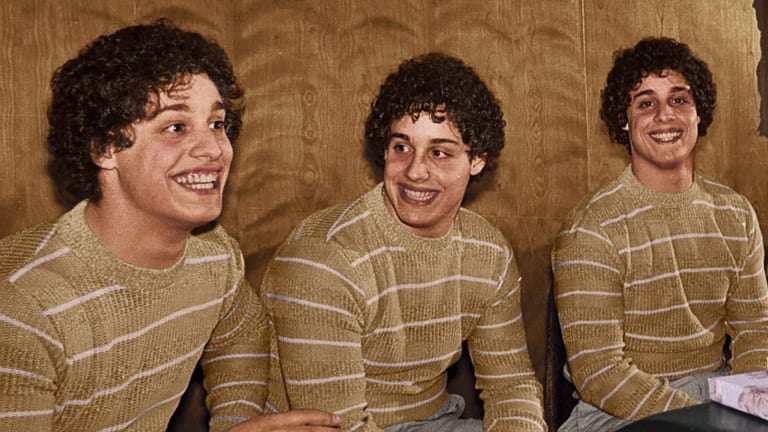 The triplets at the centre of Three Identical Strangers.

Ultimately Three Identical Strangers is not interested in delving too deeply into the brothers' psychology, while the motives and attitudes of other key figures affecting their lives are left (in some cases unavoidably) as enigmas we can only speculate about. Like Morris's work, the film has an abstract side as well as a concrete one, carrying a unique story to a point where broader philosophical issues open up.

But while Wardle knows how to hold our attention, he's not quite as skilled or sophisticated as Morris at his best. It's not giving away too much to say that a central theme here is whether personality is created by nature or nurture. This is an ancient dispute, where no anecdotal evidence can be more than suggestive – but Wardle seems determined to come up with a glib answer, as if lacking the nerve to leave things entirely unresolved.

An even bigger question hanging over the story is that of fate and free will. Whatever the forces that shaped them, the three brothers are defined as victims of circumstance, making the best of a situation they would never have chosen. Perhaps what is missing from Three Identical Strangers is the kind of ironic self-awareness that might have turned the film back on itself – acknowledging that documentary makers too have a way of playing God, slotting their subjects into a story outside their control.