Do I have to suspend disbelief a little more heartily than usual when, in this week’s The Handmaid’s Tale, June winds up in Serena’s immediate orbit at the exact moment Mrs. Waterford goes into labor? Sure. Do I mind? Not one bit.

Episode 7 essentially is a two-hander for Elisabeth Moss and Yvonne Strahovski, and it touches on so many conversations we’ve been hoping June and Serena would someday have. (P.S. They’re both excellent in it. I know, you’re so surprised.) In addition, the hour offers a peek at the ladies’ life together before the events of Season 1; turns out, things were a lot different in the Waterford household back in the day.

Read on for the highlights of “No Man’s Land.

GUESS WHO’S IN LABOR? | After last week’s crazy cliffhanger, we pick up in the car, where June is driving while Serena and the gun hang out in the backseat. June demands to know where they’re headed, but then Serena accidentally fires the weapon and a bullet pierces the windshield not far from June’s head. “F–k this!” June very understandably yells, putting the vehicle in park and running away.

But she returns after she realizes that Serena, who got behind the wheel, has driven off the road and is now stopped, moaning and apparently… “Are you in f–king labor?!” June cries in disbelief. “Of course you are.” While Serena pants her way through a contraction, June assesses the situation. Serena’s water has broken. They have no phone. The car is stuck in a ditch. And Serena is vehemently refusing to go to a hospital if they can even get to one, because “they’ll find me.” So June grits her teeth, helps her in-distress former mistress to her feet an dstarts walking her to a nearby barn. “Maybe they’ll have a manger,” she deadpans. 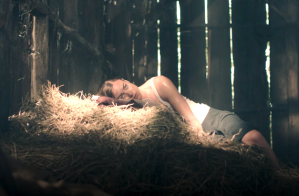 THE BAD OL’ DAYS | The structure is abandoned and dilapidated, but at least June is there with Serena — a luxury June was not afforded when she went into labor, alone, with Nichole. She talks about how all she could think about at the time was how if anything went wrong, they’d both die, and no one would even know to look for them.

She’s obviously considering several paths of action as she watches Serena scream and writhe for a minute, but then June makes a decision and starts to coach the laboring mama. When she tries to check Serena’s cervix, however, Serena shoves her away (I mean, I get it — nobody likes that) and accuses June of trying to kill her and her baby. And just like that, June’s out! She tells Serena to do it alone, and leaves.

Outside, June works to dislodge the car from the rut it’s in. While she does, she remembers attending a birth in Gilead not long after she was posted at the Waterfords’ home. In the flashback — aw, which features Alma and NuOfglen! — June and Serena exchange eyerolls across the room over all the “Breathe! Breathe! Breathe! Push! Push! Push!” nonsense. But any silliness quickly ends when Ofclarence, who’s having the baby, starts bleeding profusely. The wives quickly exit as doctor’s come in to perform a C-section while the handmaids recite a prayer. The baby is delivered alive. Ofclarence dies. June is horrified as she looks into the parlor, where the wives are cooing over the infant as though everything is totally normal and fine. She and Serena exchange a loaded look full of silent accord about how messed up the whole situation is.

In the present, June uses a floor mat and a nearby fencepost to get the car back on the road, then she climbs behind the wheel. But the sight of her hands, which are covered in Serena’s blood, gives her pause. She drops a gloriously frustrated F-bomb, then decides to go back to Serena.

MEET NOAH WATERFORD | “You came back,” Serena says dazedly as she sees her former handmaid reenter the birthing barn. I’ll say this for June: When she’s in, she’s IN. She gets right down into it with Serena as if they’ve been attending Lamaze classes together for weeks. Eventually, they’re forehead-to-forehead, hands on each other’s shoulders, and June catches Serena’s son when he’s finally out in the world. June cries with what I can only assume are a mix of emotions as she hands the baby over to his mother, who names him Noah.

“Was it worth it?” June asks, attempting to harsh the buzz a few moments later. But that oxytocin is flowing full and free through Serena’s system, and she dreamily responds, “Right now I think it was.” And then, because it’s the messy aftermath of a birth, and at the messy aftermath of a birth you tell the truth, Serena flat-out asks: “June, why didn’t you kill me?” She’s referring to the protest at the Gilead Information Center, when they ran into each other. “Why Fred, and not me?” June starts crying as she admits, “I didn’t want to,” then she chuckles at the absurdity of what she’s just said.

Then Serena wonders whether Noah will grow up to be like Fred. June hardens a bit here, saying it depends on how he’s raised “and on what you tell him is his to take.” Serena also loses a bunch of goodwill points when she says that the Wheelers are “controlling me… It’s like I’m their handmaid. It’s like I’m YOU.”

June swallows that and instead chooses to stick to facts: They have no food or water, Serena has a fever, and it’s getting cold. That fever clearly is already making Mrs. Waterford loopy: She suggests that June take Noah “like what you did with Nichole, with your daughter” and leave her behind. She starts rambling about how June is an angel — albeit maybe an avenging one — sent from God, and then she begins to weep as she talks about how maybe it’s God’s will that Serena carried and delivered Noah, and that’s the only role she’ll play in his life.

Again, we see June tempted MAYBE to take the kiddo and run, but when Serena keeps babbling about being a “vessel,” she snaps back to reality. June angrily remembers how handmaids were considered vessels and nothing more in Gilead. “We mattered. We were, we are people. We have lives,” she says roughly. “And that’s why I’m going to save yours, Serena. Because this isn’t Gilead, and I am not you.” Serena cries that she doesn’t deserve to be saved. “It’s not for you,” June says. “It’s for him… You are his mother, and he belongs with you. THAT is God’s will.” She makes Serena look at her; both of their eyes are filled with tears. “Do you understand me?” 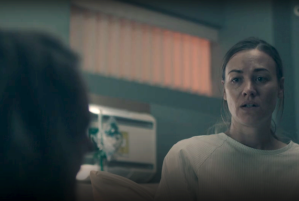 ‘JUSTICE’ | June eventually gets Serena and Noah to a hospital, where the baby is taken to the Neonatal Intensive Care Unit and a very nervous Serena is only slightly calmed when June promises to stick around. After making a quick call to Moira, June returns to Serena’s bedside to reassure the new mom that everything will be fine. In perhaps one of her most human moments in the entire series, Serena genuinely thanks June, and they clasp hands as June says, “You’re welcome.”

I hate to interrupt all of this healing and such, but I also kinda don’t because guess who just arrived in the hospital’s waiting room? KARMA! (Oh, and Tuello and Luke.) First off: Luke is OK! Phew! Second: Stuff is about to go DOWN. Very quickly, we learn that Tuello has the USB full of information they’d gone into No Man’s Land to get. And there are Canadian immigration officials there who swiftly chain Serena to her hospital bed and announce that she crossed the border illegally, so she’s being taken to a detention center. “What about my baby?” she wonders, panicked, and is told that the center has no infant care facilities.

Serena screams and cries “Please don’t let them take my baby!,” powerless to stop what’s happening. In the hallway, Luke whispers “Justice” in a very satisfied voice, and June looks shellshocked as she realizes that her husband put all of this in motion.

Now it’s your turn. What did you think of the episode? Sound off in the comments!