The indie film darling has seamlessly transitioned from child star to leading lady, whose films have grossed more than $4.3 billion worldwide 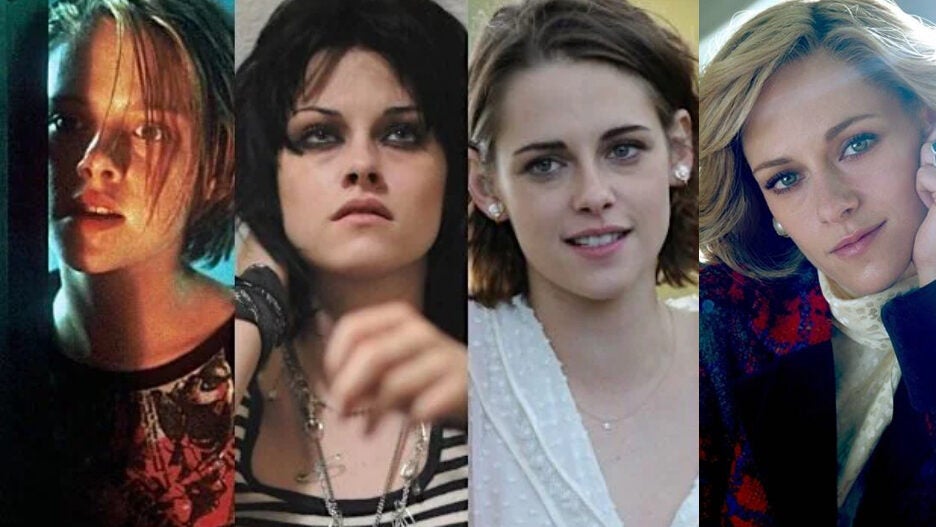 It’s hard to believe that Kristen Stewart never thought about being an actress when she was a little kid. That all changed at the ripe old age of 8 when an agent spotted her singing in a school Christmas pageant… and it’s been a steady climb to international fame and fortune ever since. With a French Oscar on her mantle and the distinction of being the youngest actress ever honored at the New York Film Festival, her films have earned more than $4.3 billion worldwide. Here’s a look at Kristen Stewart’s evolution on film.

“Safety of Objects” (2001)   •  Following a non-speaking role in the Disney Channel series “The Thirteenth Year” and a walk-on part in “The Flintstones in Viva Rock Vegas,” Stewart appeared in the indie film “The Safety of Objects” as the tomboy daughter of a troubled single mom played by Patricia Clarkson.

“Panic Room” (2002)   •  A year later, Stewart costarred with Jodie Foster in “Panic Room,” a thriller about a divorced mom and her diabetic daughter, who are trapped in their new home by invading burglars. It was the first time critics took notice of the 12-year-old’s talent and nominated her for her first Young Artist Award.

“Cold Creek Manor” (2003)   •  Stewart was nominated for a Young Artist Award for her performance in another thriller, “Cold Creek Manor” starring as the tween daughter of Sharon Stone and Dennis Quaid, with whom she shares a birthday in real life.

“Speak” (2004)   •  Stewart starred in this Lifetime/Showtime TV film as a high school freshman who chooses not to speak after being raped. The New York Times says of her performance, “Ms. Stewart creates a convincing character full of pain and turmoil — not an easy acting feat, since because of the nature of the story she has a limited number of lines.”

“Catch That Kid” (2004)   •  It was a very busy year for Stewart, who took on her first starring role at only 14 in the action-comedy, “Catch That Kid.” The film follows Maddy (Stewart), who sets in motion a plan to rob a bank to pay for her father’s operation.

“Undertow” (2004)   •  This psychological thriller tells the story of two boys on the run from their homicidal uncle and the interesting characters they meet on their journey. Stewart was nominated yet again for a Young Artist Award

“Zathura: A Space Adventure” (2005)   •  Based on the children’s book of the same name by Chris Van Allsburg (who also authored “Jumanji”), “Zathura” centers on two brothers who play a board game that teleports their house — with them and their sister Lisa (Stewart) inside — into outer space.

“In the Land of Women” (2007)   •  Stewart goes blond in this romantic drama as Adrian Brody’s love interest and Meg Ryan’s daughter.

“The Cake Eaters” (2007)   •  Mary Stuart Masterson made her directorial debut in this indie drama that had Stewart playing a young girl with a rare, untreatable disease that causes difficulty walking and impaired speech.

“Into the Wild” (2007)  •  Sean Penn directed Stewart as a teenage singer with a crush on a young adventurer (played by Emile Hirsch).

“Twilight” (2008)   •  The international success of the “Twilight” films shot Stewart’s career into the stratosphere and had love-struck teens around the world asking, are you Team Edward of Team Jacob? Or for those unfamiliar with the book it was based on, are you into vampires or werewolves?

“Adventureland” (2009)  •  Stewart starred alongside Jesse Eisenberg, Ryan Reynolds, Kristen Wiig and Bill Hader in the this comedy-drama set in the summer of 1987 in a run-down amusement part in Pennsylvania.

“Welcome to the Rileys” (2010)  •  James Gandolfini plays a heartbroken man who loses both his daughter and his mistress, and end ends up in a New Orleans strip club. There, he meets a self-destructive 16-year-old stripper, Mallory (Stewart), who is in need of a father figure.

“The Runaways” (2010)   •  Stewart plays singer/musician Joan Jett in this biopic about the formation of the ’70s rock band, The Runaways. She not only really played guitar in the film, she also sang and record a few of Jett’s song for the soundtrack.

“Snow White and the Huntsman” (2012)  •  A dark and grim – Brothers Grimm, actually – retelling of the German fairy tale has Stewart fleeing her wicked stepmother’s castle and escaping into the forest, where Eric the Huntsman (Chris Hemsworth) is hot on her trail. The film earned two Oscar nomination and $396.6 million worldwide against a $170 million budget.

“Camp X-Ray” (2014)  •  Stewart’s portrayal of a young soldier stationed as a guard at Guantanamo Bay detention camp who befriends a man imprisoned there earned her a two nominations: a Women Film Critics Circle award and The Razzie Redeemer Award, given to a past Razzie Winner who subsequently “became a respected artist.”

“Clouds of Sils Maria” (2014)  •  Stewart received the Cesar Award for Best Supporting Actress at the 2014 Cannes Film Festival playing the personal assistant to an established middle-aged actress (Juliette Binoche), whom becomes sexually attracted to her.

“Equals” (2015)  •  This futuristic sci-fi romantic drama follows two young people (Stewart and Nicholas Hoult) who are diagnosed with a disease that restores human emotions in a dystopian world where they do not exist.

“Cafe Society” (2016)   •  Stewart stepped back in time to 1930s Hollywood in the Woody Allen comedy, which also starred Steve Carell as a powerful Hollywood agent and Jesse Eisenberg as his nephew from the Bronx. And, of course, he falls in love with Stewart.

“Personal Shopper” (2016)   •  Stewart was widely applauded for her performance in this supernatural thriller about a personal shopper in Paris, who tries to communicate with her dead twin brother.

“Lizzie” (2018)  •  Based on the true story of Lizzie Borden, who was accused and acquitted of killing her father and stepmother with an axe in 1892, Stewart plays the housemaid in the Borden’s house and Lizzie’s lover.

“Seberg” (2019)  •  Premiering at the 2019 Venice Film Festival, “Seberg” recounts the FBI’s targeting of the New Wave film star Jean Seberg for her support of the Black Panthers. TheWrap film critic calls Stewart’s performance: “What Stewart does capture, more importantly, is the spark in Seberg’s eyes; she also knows how to turn off that spark, which adds additional heartbreak to the later scenes of a despairing, suicidal Seberg.”

“Charlie’s Angels” (2019)  •  In the third installment of the film franchise based on the classic TV series of the ’70s and early ’80s, Stewart is among the new generations of Angels at a private detective agency. Not surprisingly, she was cast as the wild, rebellious, unpredictable one of the group, whom the film’s writer, producer and director Elizabeth Banks says is “definitely gay in the movie.”

“Underwater” (2020)   •  This science fiction horror film has Stewart playing one in a crew of underwater researchers, who scramble for their survival after an earthquake ravages their ship. And what would a sci-fi flick set “underwater” be without a scary creature or two?

“The Happiest Season (2020)  •  In this holiday rom-com, Stewart plays a woman who meets her girlfriend Harper’s family for the first time at their Christmas dinner, only to soon realize that Harper kept their relationship a secret from her family.

“Spencer” (2021) • Stewart stretches herself in Pablo Larraín’s biopic of Princess Diana, née Diana Spencer, focusing on the dissolution of the late royal’s marriage to Prince Charles.