“Divine” is a word you hear a lot when talking with Taylour Paige and Riley Keough about Zola. That the project came into their lives when it did? “Some divine thing was going on.” That of all the actresses who auditioned, they were cast opposite one another? Divine. Even the upcoming release is divine, chalked up to the result of an otherworldly something greater than any of us.

Based on a viral Twitter thread by A’Ziah ‘Zola’ King, the film stars Paige as its titular heroine, a waitress and sometimes dancer who, on a whim, agrees to accompany a new frenemy, Stefani (Keough), on a “hoe trip” to Tampa. As adapted by director Janicza Bravo from a screenplay she wrote with playwright Jeremy O. Harris, the 48-hour odyssey soon devolves into chaos and Twittery.

Zola premiered to much hype at last year’s Sundance Film Festival, with a scheduled theatrical release that couldn’t come soon enough. And then the pandemic. There was a moment when the two stars hoped the film would drop in the depths of quarantine — a suspenseful, pulpy, riotous escape — but realized that would be fighting fate.

“I went to Ri’s house and we were talking about — with all due respect to all the souls who have passed when the pandemic was happening — we felt a sense of excitement that the world was getting this collective pause and reset. We were all being forced to awaken together,” Paige says over Zoom from her kitchen in Los Angeles, where she’s dolled up in a patchwork plaid blouse and fashionably clashing plaid skirt.

“And then remember also, George Floyd. That was the first time we’d ever seen some sh*t like that. It kind of gets me choked up a little bit. All over the world, everyone was, like, caring for the first time in a way that we’ve never seen. I even think now, maybe finally, we’re ready to hear from a Black woman. Maybe you actually are ready to hear her and notice her and absorb her and…”

“It’s just sort of divine the way that things work sometimes,” Keough adds. Even from her own Zoom window, where she reclines in a sequined top, the two remain on the same wavelength, forever able to finish the other’s thought. “For whatever reason, that this is when this film was supposed to come out. There’s some kind of energetic thing going on. It wouldn’t have worked at another time.”

In conversation with ET, the duo discussed nudity, appropriation and why it was so important that they got Zola’s story right.

ET: Taylour, you’ve spoken about reading the first script adaptation of this and what you thought of it. [“Inherently racist and sexist.”] What was fundamentally misunderstood about the story and the characters in that version?

Taylour Paige: The energy just didn’t feel adapted right. It felt like, “We’re just going to make a movie and make some money off of something and make some sh*t up.” It felt like some sh*t that we’ve seen before. With all due respect, it’s no shade to those two people that wrote it. I just was like, “This doesn’t feel like A) the story I want to tell, and B) this doesn’t remind me of the feeling I felt when I read her writing.” Like the little, little nuances of like, “So, I go down to the pool. I mean, I am in Florida.” Like, there’s still a through-line and an integrity that two white men just can’t do. Sorry! It was completely different, and it also just felt, like, exploitive.

Riley Keough: I think that there’s a million different versions of this story. And in the wrong hands, it could have easily ended up as something we’ve seen before and lots of boobs and–

Taylour Paige: It was that, though.

Riley Keough: And that’s why it’s so special, is because of Janicza and Jeremy and Joi [McMillon, the editor] and all of their incredible minds.

We do get some nudity, in the wildest penis montage I have ever seen.

Riley Keough: You do get nudity! [Laughs]

Riley Keough: It’s so funny, because I think this might be the first film that I haven’t been naked in. Ever. Maybe.

Riley Keough: Or, like, one of four or something.

Riley Keough: It’s just so funny that this is the one. I love that so much. And yeah, come check out the film. There’s an array of wieners. 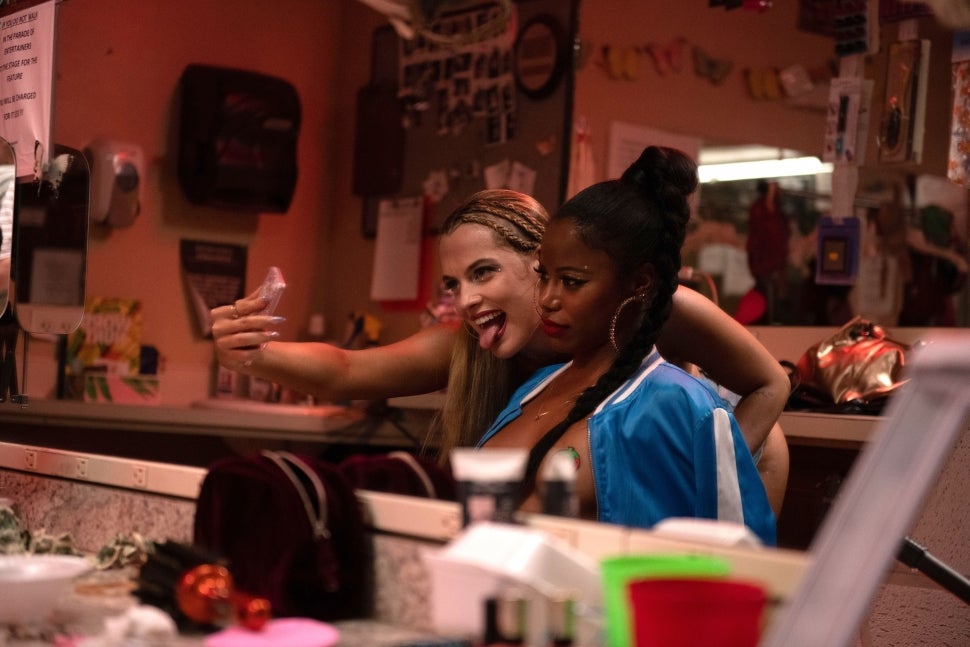 One of the most important things in getting this movie right was bringing Zola on board as part of the team. Taylour, you got a chance to talk to her before filming, right?

Taylour Paige: Yes. When I got called back for my tape, before I went in the room, I reached out to Zola, just saying, “I think you’re just so powerful and a force and I’m auditioning to play you and I just want to do right by you.” And she was like, “You got a stan in me since day one.” Like, “You’re so me, it hurts.” Like, “You got it.” She was just about it. She also shared with me that she had a dream about me.

Taylour Paige: Before, yeah. About me playing her. She did. Some divine thing was going on. I mean, it sounds like, “Psh, yeah, right. This is too good to be true.” But honestly, a lot of that happened with us. I feel like a lot of things that are too good to be true are available to everybody if you tap in and you’re aligned, you’ll notice things just kind of aligning, where you’re like, “Wow, this is extraordinary.”

Was there any one thing in particular you took from your conversations with her that informed your approach to playing this part?

Riley Keough: And she’s really profound in a similar way to Taylour, which I think is incredible. Like, spiritually. She’s very spiritually– I feel like all the words around this language are so corny, but she’s deep and, I don’t know. Her and Taylour, they both have this similar sort of spiritual depth to them which is beautiful.

Taylour Paige: Thank you, Riley. Well, look at how powerful. She tweeted some sh*t and we’re doing press right now for a movie from it. That’s really powerful!

Riley Keough: And the best part about it is she’s like, “Yeah. Of course.”

Taylour Paige: She’s like, “I’ve just been waiting for people to catch up.”

Riley Keough: That is a hard mindset to achieve, you know? It’s incredible.

Riley, I’m sure you’ve been asked this in every single interview, but I need to know absolutely everything about the voice: How you found it, what inspired it, if there were others you tried out, how you knew it was right.

Riley Keough: From the beginning, it was very apparent that appropriation was the goal. And in those conversations, Janicza basically said to me that she really wanted to go there and more. She wanted more. I was working with a dialect coach, and I would send her voice notes and it definitely started out more subtle. And she was constantly always just like, “Push it further. Do more,” until it was what it is now. It was really just voice notes and practicing and my dialect coach would have me sit at her house and put a cork in my mouth and do my monologues with a cork in my mouth. Because I have TMJ and my mouth is, like, tight, and so she was like, “You need to relax your mouth for the way you’re speaking.” So, I would just sit there all day and put this cork in my mouth and try my dialect and send videos to Janicza. It was really, um, interesting.

Taylour, you get to deliver the iconic first tweet. That is sort of the “May the Force be with you” of this movie.

Were there nerves about shooting that or figuring out how to deliver it?

Taylour Paige: Yeah. Yeah, especially because as I got to know Zola more, she has, like, a million voices just like I do. So, I just wanted it to sound like her in that way. But that voice that she’s taking is her Zola social media voice, right? In a way, it’s funny because you’re talking to the ether, but there’s a voice for that. Versus when you’re sitting at home with your best friends. So, I was like, “Y’all want to hear a story about how me and this bitch here fell out?” I just wanted it to be like, “Oh, here we go,” you know? 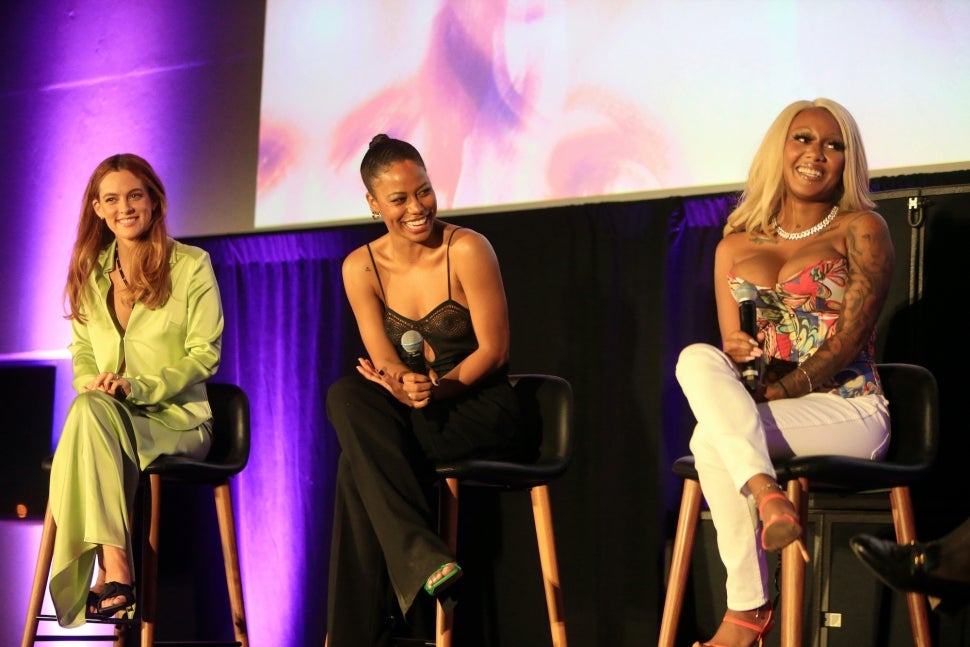 We talked about how much hype there is for this movie. Who in your lives is either most excited to see it or who has seen it and had the best reaction?

Taylour Paige: My dad. My 75-year-old, sweet dad, who is like the most sweet, chill guy. He’s the kind of dad that texts something and then he’s like, “Love, Dad.” And it’s like, “Dad, I know.” Just to give you context. And he has an Android. It’s that kind of dad. But he was like, “Hi, Taylour, I saw the trailer and I can’t wait to see you in this movie. My favorite part is when you tell your nemesis, ‘Word.'” I really got a chuckle from that. And I was like, wow. You’re so cute, Dad. Like, my dad is excited to see this!

Riley Keough: It breaks my heart. It’s so sweet.

I can’t wait to hear his review after seeing it and hear his favorite parts.

Riley Keough: Maybe we should just do a just our parents screening and see how that goes.

Taylour Paige: Honestly, my dad is pretty evolved. He’s not going to be like, “I don’t want to see my daughter like.” He’s going to love it. I don’t know about my mom.

How about you, Riley?

Riley Keough: But I’m excited for that. Because it started on Twitter. Regardless of what the reactions are, because I think that’s what’s so great about film and especially this one, is there are going to be people who are violently allergic to this movie and people who are obsessed with it. And I think that–

Taylour Paige: Both are welcome.

Riley Keough: I love all of it. That’s part of making art. So, I think that I’m excited for all of the reactions, whether they’re good or bad. I’m excited for Twitter’s response.

Zola is in theaters on June 30.