The TV and radio presenter is set to compete in the final this Saturday with pro dance partner Kai Widdrington. They’ll be going up against Rose Ayling-Ellis and Giovanni Pernice, and John Whaite and Johannes Radebe to battle it out for the Glitterball Trophy.

However, AJ is facing a major obstacle going into the finale after suffering a foot injury which required an emergency scan.

Speaking about her ordeal, the presenter broke down in tears on Strictly: It Takes Two as she explained: ‘I’m upset because I’ve suffered an injury, I don’t know when it happened but essentially I’ve got issues with my joint, I’ve suffered some traumatic injury to my ligaments, there’s a lot of inflammation.

‘I can’t pinpoint when it happened during training. In fact, we felt really positive in training on Monday, I felt fine but the pain came on so suddenly and acutely that I actually projectile vomited. I’m unable to stand on my right foot, I can’t stand up without crutches and I’m really upset.’

Wiping away tears, she added: ‘I’m sorry. I’m upset because we were so excited on Monday, we got three amazing dances that we really want to perform.’ 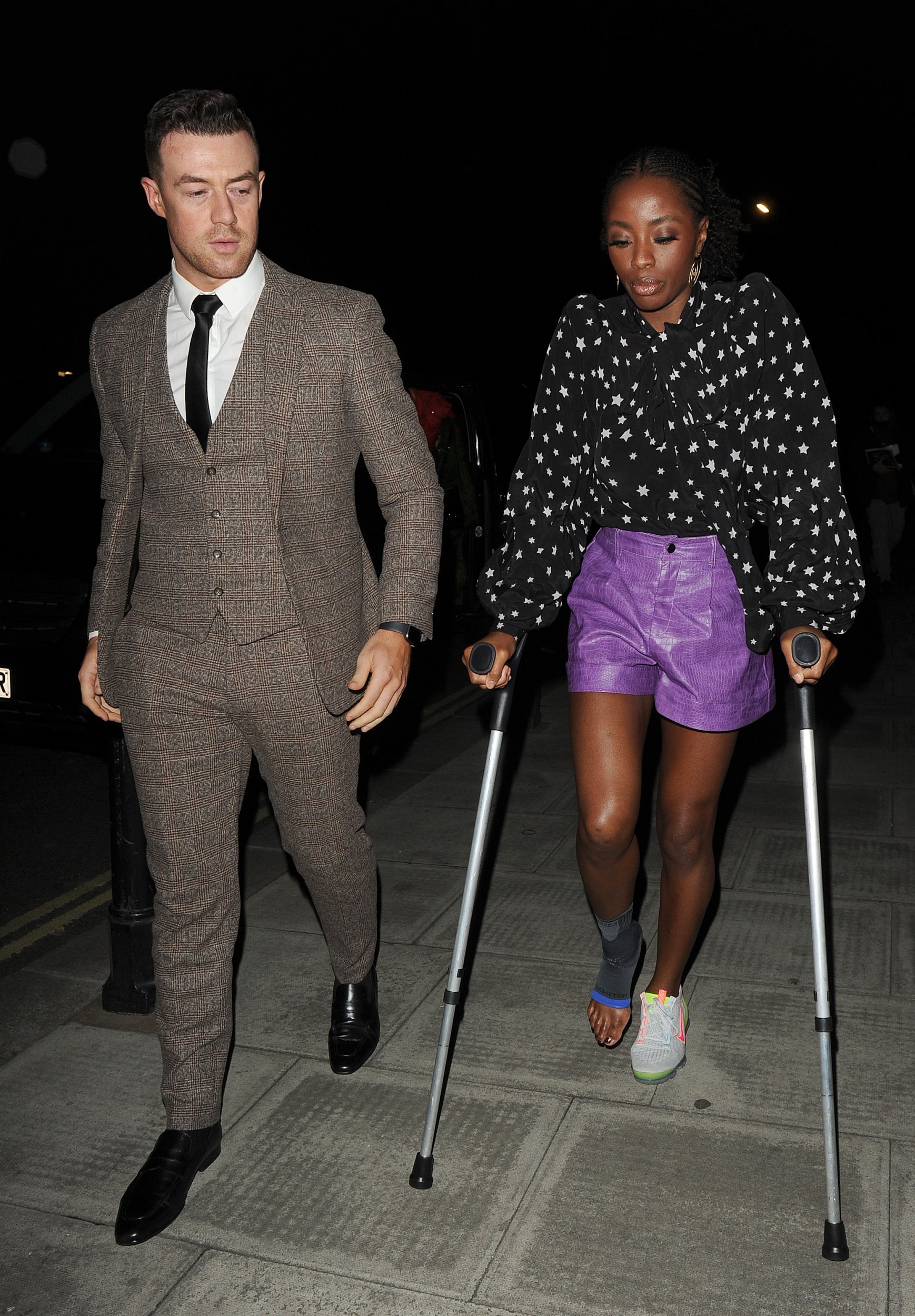 However, she’s optimistic about her chances in the final and praised her dance partner Kai for his support.

‘I know I’m getting upset but we are genuinely remaining hopeful, I’m surrounded by a really great medical team who are trying their best to get me back on my feet and of course I’ve got Kai who is really holding me together,’ she said.

Prior to the interview, AJ was seen making her way into the studios on two crutches with Kai by her side.

She later shared an Instagram post of her backstage at It Takes Two, sitting in a chair and posing with her crutches showing a disappointed face – albeit still looking chic as ever in a green faux fur coat.

In the caption, AJ told her Instagram followers: ‘I’ve got a repeated traumatic impact injury to my right ankle affecting the joint, capsule and ligaments themselves. I can’t pinpoint a moment it actually happened during training but the pain came on suddenly on Monday night.’

The TV star explained that she’s been unable to rehearse properly before the final, stating: ‘To say I’m devastated would be a huge understatement and I am gutted.’

‘Thanks for all your messages. I sincerely hope it will be all right on the night,’ she concluded.

Strictly’s upcoming final has been hit with other chaos, as Robert Webb announced he will not be appearing as he’s unable to perform for health reasons, while Tilly Ramsay has pulled out after testing positive for Covid.

The Strictly Come Dancing final airs this Saturday at 7pm on BBC One.