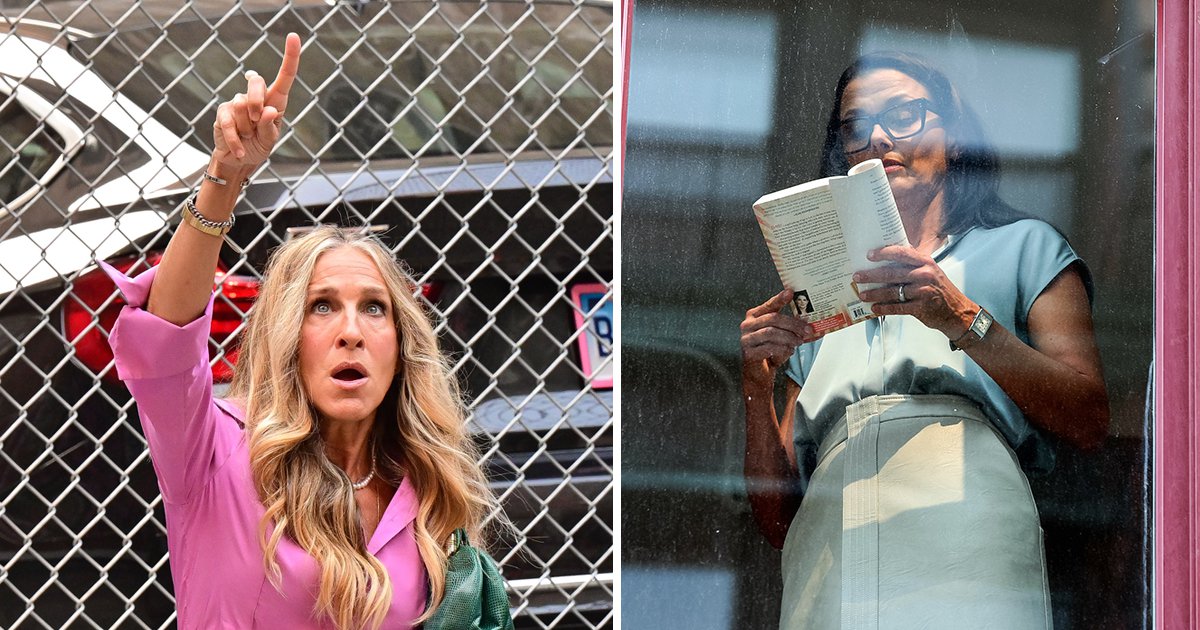 It looks like the Sex and the City reboot is going to be delivering drama in the bucket loads, as recently released photos show Carrie Bradshaw spotting her arch-nemesis Natasha.

For the uninitiated, Bridget Moynahan starred as Mr Big’s (Chris Noth) pearl-wearing and beige-loving second wife in the second series of the show.

By the third season, Carrie (Sarah Jessica Parker) and Mr Big are immersed in an affair, which Natasha finds out before falling down a flight of stairs and chipping her tooth.

The reboot, titled And Just Like That, wouldn’t be true to form if it didn’t have a dash of chaos, drama and Manhattan sophistication.

It appears Natasha will play a pivotal role in the long-awaited series, as recently released photos show Carrie accidentally spotting her while out in New York.

The shots show Carrie out with friends Charlotte (Kristin Davis) and Miranda (Cynthia Nixon) before seeing Natasha sitting in a window.

The fashionista can be seen looking on in pure horror, as she tries to hide her face to avoid being spotted by the brunette beauty. We can’t wait for the drama that is sure to ensue.

A leaked script from the Sex and The City reboot appears to suggest that Big has been unfaithful – or at least, is still involved with his ex-wife in some way.

Page Six published an image of a page from the reboot script, belonging to Charles Hunt, which featured a scene where Carrie, Miranda, Charlotte and Stanford (Willie Garson) are having dinner at a ‘cramped table’ where restaurant servers keep bumping into them.

Carrie says: ‘I was doing well, wasn’t I doing well? Before this?’, with Miranda and Charlotte agreeing and Stanford saying: ‘I’ve been impressed.’

She continues: ‘I was taping the podcast, I was washing my hair. Yes, I wasn’t eating or sleeping, but at least I felt good about my marriage. Now I’m just one of the wives he was taking care of?’

The page ends with Stanford getting hit by a kitchen door and Miranda ordering a second glass of Cabernet, so we don’t get any more details just yet, but it sounds like Big is up to no good again.

The new series will feature a number of well-known characters alongside the main cast.

Willie Garson will reprise his role as Carrie’s best friend Stanford Blatch, with Mario Cantone reprising his role as Stanford’s husband and Charlotte’s close friend Anthony Marentino. Sara Ramirez (Grey’s Anatomy) will also be a part of the cast as Che Diaz, a comedian.

And Just Like That will be released on HBO Max in the US.