On Monday morning, BBC Breakfast returned to screens with Sally Nugent and Jon Kay who welcomed MP John Swinney to speak on SNP leader Nicola Sturgeon’s recent comments criticising the Conservative Party. However, Sally was blasted by viewers who took to social media to defend Sturgeon and Swinney.

Sally probed Swinney about Sturgeon’s comments after she stated that she “detests the Tories,” and asked if he agreed.

Swinney responded: “First Minister made clear yesterday that she detests the policy approach and the policy programme their taking forward.

“And no wonder that’s the case, given the damage, the wreckage that’s been done in the course of just the last couple of weeks, by the latest steps taken by the Truss government

“And that disastrous mini-budget that has sparked such financial hardship for individuals,” the politician added. 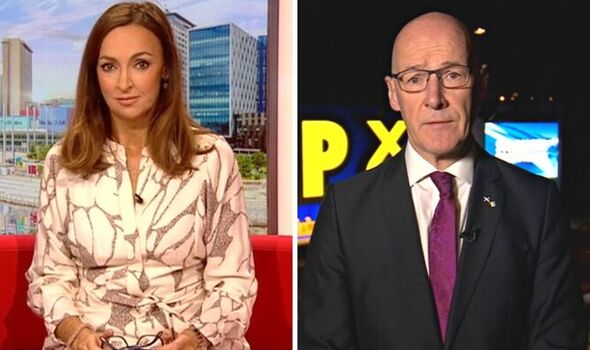 Sally’s questioning was met with backlash from viewers who took to Twitter to blast the presenter, this included @Erasmo2058 who wrote: “When you implement detestable policies then expect to be detested. Move on.”

@JournoBird added: “Poor old @JohnSwinney wondering when they’ll actually get on to talking about policies rather than what his boss thinks of the Tories. This interview is embarrassing.”

An angered @thelazyentrepre added: “Shut up Sally Nugent. Defending the Tories under the guise of parties should be working together.”

@Penno350 tweeted: “Move on then Sally, poor interview wrapped round the axle on how poor the Tories are.”