The Elton John biopic, Rocketman, is a cathartic outpouring of a lifetime’s load of hurts and grudges.

Fortunately for us, it’s expressed in some of the most exuberant pop songs ever produced and it’s lavishly adorned with stardust and sequins. While it’s an ugly duckling tale, Elton isn’t transformed into a swan. White is not his colour. Nor is black. As all the fans know, he prefers more exotic plumage.

The opening scene has him in an orange bodysuit with a gigantic pair of wings and a red helmet topped with horns and trimmed with beads. The effect is part-angel, part-devil, which seems appropriate. He’s on his way to a group therapy session that opens the door on the first of many childhood flashbacks. 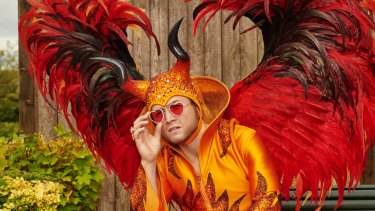 Taron Egerton was asked by Elton John to play him in Rocketman.

Seven year-old Reggie (Elton’s real name) is about to introduce his mother, Sheila (Bryce Dallas Howard) by leading the neighbours in a spirited chorus of The Bitch is Back. There’s a certain ambivalence to it since Elton goes on to claim that the bitch resides in his own psyche, but if that’s so, there’s no doubt about the cause. Look no further than Mum and Dad. Sheila is a selfish and gleefully sarcastic mother while her husband, Stanley (Steven Mackintosh) would rather young Reggie be neither seen nor heard in his presence.

In life, John has said that he later made his peace with his parents but in this film, which covers his earliest and most difficult years as a star, you would never know it.

It’s been a long time in the making, having grown out of The Red Piano Show, which John performed in Las Vegas a decade ago. Lee Hall, author of the Billy Elliott screenplay, wrote a script, British producer Matthew Vaughn pushed it forward and they finally came up with a dream team.

Their lead, Taron Egerton is a powerhouse, doing his own singing while embodying both Elton’s diffident offstage persona and the unstoppable force of nature we see bouncing calisthenically around the piano keys. And director Dexter Fletcher (Bohemian Rhapsody) is a perfect match for him.

Their inspiration lies partly in the glamour and theatricality of the MGM musical in its heyday but no Fifties film glided as smoothly and speedily in and out of song and dance as this one does. Months are covered in the space of a single routine, with the passing of time signalled only by Elton’s costume changes. The show goes on whatever the traumas being felt beneath the feathers, the tinsel and the funny glasses. 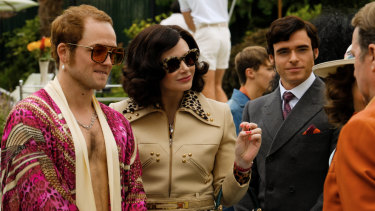 The agent of much of the suffering he experiences during this period is his manager and first love, John Reid (Richard Madden). Played by Game of Thrones’ Aidan Gillen, Reid cut a cool, commanding and slightly menacing figure in Bohemian Rhapsody. And here, the coolness and the air of command still feature, along with a supreme confidence in his powers of seduction. Elton, who’s still a virgin, hasn’t a chance. And once again, it’s the pain we witness, without any of the blithe moments that must surely have brightened at least a few of the years they were together.

But no matter how bad things get, Egerton somehow succeeds in staving off the cloying effects of self-pity. Much of it is in the vigour of his performance. Elton’s drug of choice may be cocaine but it can’t give him anything like the high he gets from sniffing out a receptive audience. And even at his worst, he’s sardonically aware of the fact that his worst enemy really is “the bitch” within.

The only constants in his life are his grandmother (Gemma Jones) and his friend and collaborator, the lyricist Bernie Taupin, played with great sweetness and unwavering dignity by Jamie Bell. Bernie is his conscience. While he, too, knows how to enjoy fame, he never lets it warp his sense of self.

The plot takes us to the end of Elton’s term in rehab, climaxing with a triumphant staging of I’m Still Standing, together with a credit sequence blending the fictional story with footage from the real thing. It’s a terrific finish to a film which is both life story and hymn of praise to the shameless glories of pop, rock and the movie musical.