Good Morning Britain was discussing whether it is okay to smack your children this morning after actor Martin Freeman admitting to doing so with his own children when they were younger. The news and chat show had created a poll which had been circulating social media, and presenters Richard Madeley and Ranvir Singh were joined by two guests in the studio to continue the conversation.

In upcoming months, the Welsh government are going to look into following Scotland’s precedent over banning the act as they consider whether or not the defence of “reasonable” punishment which protects parents if they discipline their children should be upheld.

Richard spoke about his own experience of being taught consequences and lessons as a child and revealed he had been “badly beaten” by his own father when he was young.

“I was badly beaten as a child by my dad. When I look back to my childhood, most of my friends I got the cane several times. And I was seriously beaten…” Richard explained. 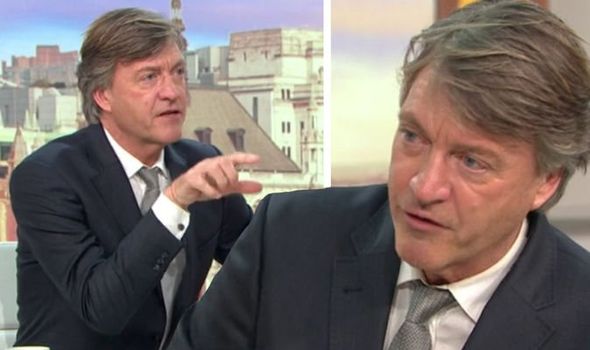 But it wasn’t just at home where he was given a physical punishment, he was also hit at school.

“We’re also going through huge cultural changes, when I look back to my childhood, most of my friends at school were hit by their parents and hit with sticks, canes above the mantelpiece. I got the cane several times at school and seriously got beaten.

“I got three strokes at (school) for throwing a paper dart in Miss Davis’ English class. The scars lasted six months and I am still angry about it,” he said.

“I tell you what Ranvir, I bet you the yeses go down in 10 years’ time. I think that’s the path we’re on. That’s why we’re having the debate now.” 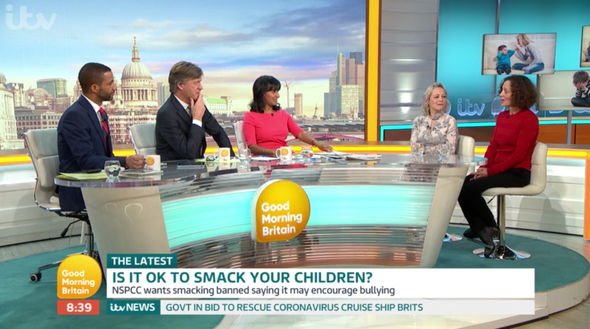 As for what their guests thought, Sarah Cawood believed smacking is acceptable as a last resort. She admitted: “I walloped my kids in the depths of post natal depression and I regret that.

“I will have to live with that for the rest of my life. I apologised to my kids and said to them, ‘That was wrong of mummy.'”

Whereas Sian Griffiths said: “I’m a parent, I know how difficult it is, I do think it is wrong in principle to smack your child.”

“In principle or in practice?” Ranvir interjected. 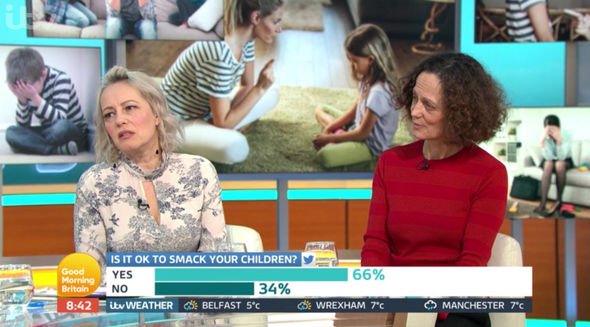 “And they have done it for a reason, there is a lot of research now which shows if you smack your child or you use that as a form of discipline, your child’s likely to grow up more aggressive, more anti-social and anxious,” the journalist explained.

“Martin Freeman’s point is that there is so much out there about ‘perfect’ parenting, guilt about how you’re doing it, I think what he’s trying to say is ‘Let’s be real about this, we don’t hate our kids, I want the best for them but let’s not pretend it’s easy or we get it right all the time and then we ruin our children’s lives.’ It’s a horrible narrative,” Ranvir argued.

Those watching at home took to Twitter to comment, one said: “No,  never done me or my sons any harm. Correct and timely discipline helps shape a person.”

“Give children discipline they will learn to behave,” another suggested.

While another added: “No I don’t agree with smacking however if there’s danger and child is not listening then a gentle hand isn’t going to kill them instead! I’d rather my child alive then dead by a run over car, depends on situations to! Also I’m the parent not you!”

However, someone opposed: “Oh my God! I can’t believe the survey shows 65% in favour of smacking (hitting). If it’s not OK to use violence against adults, why is it OK to hit children, especially as they are not able to fight back? Martin Freeman admitted that he did it when angry which is even worse!”

“Child abuse…!! End of…. there’s other ways to discipline a child… why on earth anyone would want to physically hurt a child is beyond me n is not even debatable (sic),” another added.