This Morning: Phil Vickery walks off the set live on air

Phil, 59, was on hand to be the chef in the kitchen, joining This Morning hosts Phillip Schofield, 58, and Holly Willoughby, 40, in the studio. The moment the chef walked off came when the presenters were discussing what was coming up on the ITV show. Throwing the reins of the programme over to their colleague, Phillip joked his co-star was being informal and as a result, the culinary genius decided to jokingly leave the set.

“You alright guys?” Phil asked the hosts, with Phillip replying: “Well, that was very casual. I’m alright, mate, how are you, mate?”

The chef bowed his head in embarrassment before telling the presenters: “I prefer the casual approach.”

Phil then went on to discuss the roast chicken dish he was going to be making but his co-stars were in hysterics.

“I can’t wait, I literally cannot wait,” Holly remarked between the fits of laughter to which Phillip added: “Cheers, mate. See you later.”

“Good luck,” the culinary genius replied as he was then seen walking out of the kitchen and towards the studio doors. 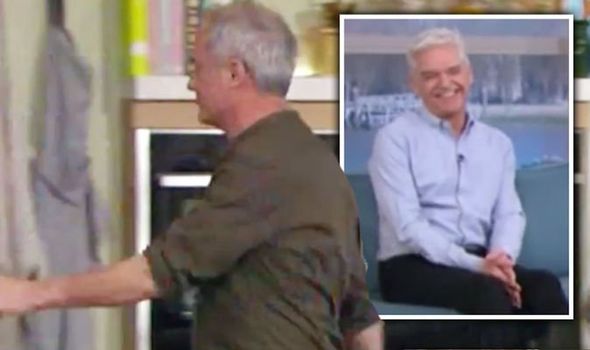 However, Phil did end up returning to the studio later in the programme to give his cooking demonstration to viewers.

Phil has spoken out about what it’s like to work alongside Phillip and Holly on the show, stating that the jokes between them makes the time more enjoyable.

The chef said: “I get more enjoyment cooking on This Morning than I ever did winning Michelin stars and restaurant of the year.”

Asked what the pair are like behind-the-scenes, he explained: “Exactly the same. I’ve been very lucky to be on that show for all these years.”

“I’m very lucky to be doing it,” he told Entertainment Daily, adding he feels “extremely lucky” to be in his position.

Addressing if he would ever leave the show, Phil said if his time comes to make a departure, he would humbly accept that decision.

“Everyone’s got a shelf life, I’ll go one day, but when I do I’ll shake their hands and I’ll say thank you, I’ve had a good run,” he said.