ARGUS isn’t done with Peacemaker just yet. And now that his kill-y services have been retained by the government organization, will you stay tuned to the antihero’s eponymous HBO Max series?

Now streaming its first three episodes on HBO Max, Peacemaker‘s opening installment kicked off with a “Previously On” of key moments from 2021’s The Suicide Squad, which was written and directed by series creator James Gunn (who wrote/directed the premiere).

Having recouped from the events of the DC team-up movie, Peacemaker aka Chris Smith (again played  by John Cena) slips out of the hospital and into a cab, unaware that someone at the nurses station has alerted a “MURN” to the patient’s status.

We then watch as new (and unlikely) AGRUS recruit Leota Adebayo (Danielle Brooks) and her wife Keeya (Elizabeth Ludlow) and their dogs move into the motel room they will call home, while Leota works an op for ARGUS. Leota gets a text reporting that ” the dove is heading to the coop,” and we see Peacemaker pulling up to his trailer park home, giving up his helmet as cab fare. Unable to find a spare key after four years in the clink, he breaks in through a back window and is aghast to see that his cell service was never shut off, and he has thousands of messages waiting — mostly, it seems, from his “BFF” Vigilante.

Peacemaker’s homecoming is cut very short when his trailer is surrounded by ARGUS agents Harcourt (Jennifer Holland), Economos (Steve Agee), Adebayo and team leader Clemson Murn (Chukwudi Iwuji). They make clear that he has but made a dent in his prison sentence, and thus is still indentured to ARGUS — and as such, will help them deal with something called Project Butterfly. (Adebayo meanwhile uses the occasion to formally introduce herself to the team, in a way that would have made John Candy’s Stripes character proud.)

After the team agrees to meet up for dinner that night at a place with “dope” mozzarella sticks, Peacemaker pays a visit to his father, Auggie (Robert Patrick), who reveals himself to be 1) angry that his “simp” of a son got shot during Project Starfish, and 2) was shot by a man with a rat phobia. The men set aside their animus enough to access the family armory, an impossibly vast warehouse located within Auggie’s ranch style home. There, Chris is given his pick of uniquely specialized helmets, including one that has x-ray vision and another (if you watched the bonus scene) that for some reason gives you scabies. Chris then reunites with his pet eagle, Eagly (voice by Dee Bradley Baker), who greets him with a big ol’ hug. 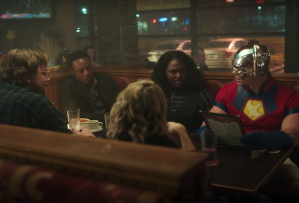 Peacemaker meets up with Murn & Co. at the restaurant, where they chide him about his garish get-up, while he zeroes in on Economos’ seemingly dyed beard. (We also get a glimpse at a spastic bus boy/Peacemaker fan boy named Adrian Chase [Freddie Stroma], whose brother Chris once knew.) Peacemaker is given a file about their first Butterfly target, a U.S. senator. Afterward, Chris bonds a bit outside with Adebayo (though Eagly nips at her hand).

Back at her motel room, Adebayo has a video chat with Amanda Waller (Viola Davis), who reminds the new recruit that only she has been entrusted with the bigger picture and thus truly knows “what’s going on” with their current mission.  Seemingly related, we learn that Adebayo has been furnished with a dummied-up diary that she is to plant inside Peacemaker’s home. Oh, and she is Waller’s daughter! 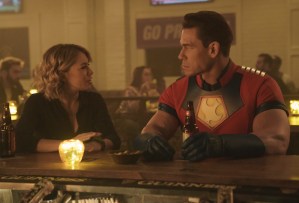 Chris meanwhile caught sight of Harcourt heading into a bar, and pulled a U-ey to catch up to her inside. Having already fended off one handsy jerk, and after giving a beatdown to his buddy, she has little patience for Chris’ admitted intent to has no-strings sex. Instead, Chris apparently draws the interest of a big-haired blonde barfly, named Annie Sturphausen, and the two head back to her place to vigorously knock boots. Afterward, Peacemaker checks out Annie’s impressive record collection, and in his tighty-whiteys (using her vibrator as a mic) rocks out to Quireboys’ “I Don’t Love You Anymore.”

His crooning, though, is cut short by a violent attack by a knife-wielding Annie, whom he quickly realizes boasts enhances strength and imperviousness. They slug it out a bunch, until Peacemaker (still in his Fruit of the Looms) leaps out the window, to the pavement several floors below. Annie easily does same and gives chase, but Peacemaker makes it to his car and slips on the helmet that has “sonic boom” capabilities. As a result, Annie is obliterated into road pizza, and Chris is left sitting in a medium-sized carter in the middle of the parking lot. And for his troubles, Eagly arrives with the gift of the rodent he just killed.

What did you think of Peacemaker’s small-screen debut?

Want scoop on Peacemaker, or for any other show? Email [email protected] and your question may be answered via Matt’s Inside Line.