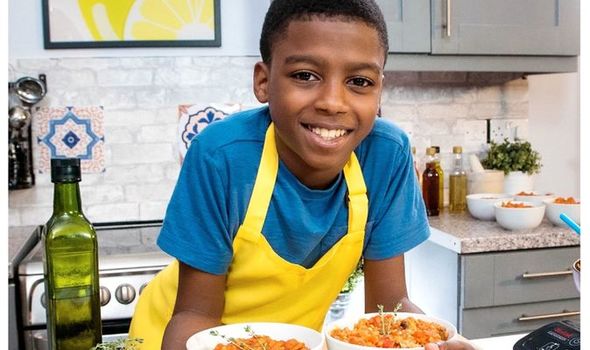 “Sometimes you need a quick and filling breakfast that will set you up for a busy day of world domination,” he declares, “and today is going to be mega busy.” The camera then cuts to Omari’s to-do list: “Wake up early. Make breakfast. Walk dog. Plan to rule the world.” One could be forgiven for suspecting that his global domination plan is already underway. And it couldn’t happen to a nicer lad. A charming boy with a contagious laugh, Omari isn’t just a popular TV chef – he also runs a successful vegan dip company, called Dipalicious.

Last winter, he opened a successful pop-up restaurant at Boxpark food market in Croydon, South London, and impressed the park’s CEO so much, he was given the space rent-free.

As if that wasn’t enough, his first book will be published in January. Omari McQueen’s Best Bites Cookbook offers 30 simple-to-follow plant-based recipes created by this enterprising lad, who’s still only a year or so out of primary school.

“It was amazing writing it, but I had to get help from my mum with the spelling,” he admits modestly.

Having won several accolades for his work, including being named 2018 Under-12 TruLitte Entrepreneur Hero, he is the youngest award-winning vegan chef in the UK.

Equally remarkable is the reason Omari got into cooking in the first place. When he was just seven, his mother Leah was laid low by a series of rare and debilitating migraines, leaving her unable to do anything much around the house.

He takes up the story: “My dad taught me how to warm up food he’d made before he went to work. But I actually wanted to cook food with my dad rather than just warming it up.” So bus driver Jermaine spent his time off helping Omari, still only seven, learn how to cook properly from scratch for their family of eight. 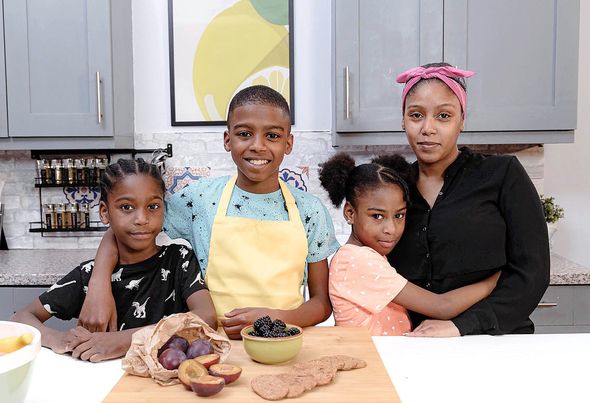 “My dad taught me how fun and easy it was to cook,” says Omari. “I love cooking and I’m proud I was able to step in.”

His food certainly brings the McQueens together. On the show there is a family story behind every dish Omari prepares, such as a surprise for his dad on his return from work, a family movie night, a picnic for the park, or a Sunday lunch.

Omari is delighted that through his TV show, his food is now helping to unite lots of different people.

“My mission is to bring people together through food without harming any animals,” he says. “That makes me so happy.”

As Omari is only 12, quite understandably his mum sits in on our Zoom interview and proves very helpful. From time to time, she chips in, fleshing out some of his ideas and filling in the background to his stories. For instance, Leah reveals that when she was desperately ill, his kitchen duties gave Omari a much needed distraction from his worries.

“The cooking gave Omari something else to concentrate on,” she explains. “I’m very proud of him, but there’s also an emotional part to this. During a hard time for our family, he used food and cooking as a form of escape from what was actually happening.

“When he was cooking for me, that was his way of helping out because he couldn’t heal me.”

Although she now realises that by putting his family on a mostly vegan diet, animal-lover Omari achieved more than just lightening his mum’s workload, he’s actually improved her health.

“I haven’t had a large migraine for two years and changing my diet was one of the keys to my improvement,” Leah says.

“When I was first ill, I was eating a lot of red meat, but Omari was the one who told me, ‘red meat makes migraines worse’.”

Leah, now pescatarian, eating fish but not meat, continues: “I haven’t had any red meat for two years and I haven’t had a migraine in that time. So Omari thinks he has cured me!”

At which point, Leah leans over and tenderly kisses her son on the forehead.

These days, Omari rules in the McQueen kitchen and he’s chosen a surprising role model.

“His favourite chef is Gordon Ramsay,” Leah says. “He says, ‘I’m like Gordon Ramsay without the swearing or the meat!’ Omari likes to cook with Daddy, but not me. He says I’m too messy!

“I’m a huge foodie, but I’m also one of those people who likes to cook and eat at the same time. Omari hates that. He says, ‘It’s not finished. You can’t taste it yet!’”

Omari calls the kitchen “my science lab” and has filled several notebooks with new recipes and loves to experiment.

“When I was making my first ever vegan dip, at first I didn’t like the way it tasted,” he says. “Then I added my mum’s good, good mango and mixed it in her blender, and it was delicious.

“But Mum was disappointed. She said, ‘Why are you using my good good mango and my blender without my permission?’ But she was pleased when she tried the dip!”

Omari turned vegan when he was eight after seeing a video about how animals are used for food and clothes.

Leah recalls: “He was in tears. At the time, we had two dogs and four guinea pigs, and that day Omari made the decision that meat was not for him.

“Unfortunately, we didn’t have any vegan food in that evening. We just had a bag of rice. So I asked him, ‘Do you want gravy with that?’”

Omari is also highly committed to sustainability. He says: “It’s very important to learn about sustainable eating because you’re helping the environment.

“I’m trying my best to stay away from using plastic. I’m not wasting any food and I’m recycling.”

“He’s so big on food waste,” Leah laughs. “Sometimes he says to his sister, ‘You have to eat that otherwise you’ll be having it for breakfast tomorrow’. If Omari is dishing it out, occasionally she has a mixture of yesterday’s and today’s dinner on her plate.”

Omari is clearly going from strength to strength. Dipalicious, for example, is thriving. He recollects how he decided to start his firm after going on a school trip to a local business.

“I came back and said to Mum, ‘I don’t want to work for people. I want people to work for me’. So she told me, ‘Then start your own business’. She didn’t think I’d start it right away!

“I began making my vegan dips, and pretty soon afterwards, I went to a food event. It was five hours long, but I sold out all my dips in an hour. Mum thought that would be it, and that I wouldn’t want to do it any more. But when I got home, I said to Dad, ‘Can we make some labels and some packaging?’ I just wanted to carry on.”

Omari may be flying high right now, but he is very much keeping his feet on the ground. He is, for instance, remaining admirably level-headed about money. All he has bought for himself with his earnings is an Xbox and a new pair of trainers.

His mother smiles: “He doesn’t want to save, but he has to. He can spend a little bit, but the rest has to go into savings. I’m a realist. We don’t know how long this journey will go on for. One day he might want to travel or go to university or to a culinary school. It’s important to have a back-up.”

Omari is being equally sensible about his new-found fame. “The rule is to stay humble and to be yourself,” he declares.

Leah adds: “At home, Omari isn’t treated any differently to how he was before. If he starts getting an ego, he’ll have to learn how to do it by himself.”

Another thing that will not change is Omari’s passion for cooking.

“He keeps me on my toes,” Leah adds. “Last year he printed out a ‘vision board’ of his dreams. On it he said he wanted a TV show, a cookbook and a pop-up restaurant. He has now completed all of those things.

“Straight after the show was finished, he said to me, ‘Mum, I need more ink for the printer because I need to do a new vision board. My goals need to be bigger’.

“I replied, ‘Look, mate, I’m still trying to catch up with you here!”

So how is Omari’s plan for world domination coming along? “It’s going well,” he laughs. “It will take a long time. But it’s still my ambition.” And you wouldn’t bet against him achieving it.

What’s Cooking, Omari? airs on Sundays at 9.30am on CBBC and is available on BBC iPlayer