Hear ye, hear ye: Night Court is back in session on NBC, with a new Judge Stone presiding.

Big Bang alum Melissa Rauch stars in the new sequel series as Judge Abby Stone, the daughter of the original’s Judge Harry Stone (played by the late Harry Anderson). Tuesday’s series premiere opens with a perky Abby arriving for her first day as the new judge in her dad’s old courtroom, but not many people there remember Harry and the old Night Court crew. Former prosecutor Dan Fielding (John Larroquette) is still around, though — but he’s reduced to slinging lattes at a nearby café. The barista gig is just a cover so he can hand out subpoenas as a process server, but the scraggly beard he’s sporting is very real. (And hey, they kept the old theme song!) 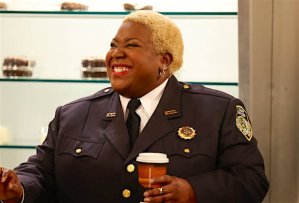 Abby soon meets her new co-workers: giggly bailiff Gurgs (Lacretta), ambitious prosecutor Olivia (India de Beaufort) and frustrated clerk Neil (Kapil Talwakar). Her first case is a psychic accused of fraud, and when Abby puts the psychic to the test, we learn the judge is “very happily engaged,” although her fiancé lives out of of town and has yet to move to the city. (Hmmm.) She pushes the court’s beleaguered public defender to try a little harder next time — and so he quits on the spot. Sitting in her late dad’s old judge’s chambers and looking through his old things (Clarence the armadillo!), she decides she needs a new public defender “who cares just as much about people as I do.”

So she knocks on the door of her dad’s old pal Dan, who tries to shoo her away at first, but lets her in once he hears she’s Harry’s daughter. He offers his condolences and reveals that his own wife Sarah has recently passed away as well. When Abby says she’s the new night court judge, Dan lets out a terrified yelp, scoffing at her offer to be the new public defender. But she plucks his heartstrings by reminding him how he once convinced Harry to get back in the courtroom, so he reluctantly agrees to at least pay a visit to his old stomping grounds. 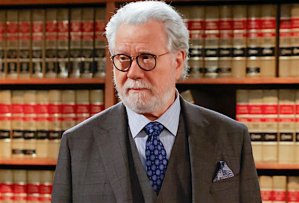 Once Dan arrives, he quickly clashes with Olivia, and though Abby tries to talk him into sticking around, he walks away, leaving her high and dry. Meanwhile, poor Gurgs is driving herself crazy trying to figure who’s rearranging the letters on the courthouse directory to make dirty jokes — but Abby knows it’s Neil, who’s overqualified for his job and bored. She needles him about what he really wants to do, and her upbeat attitude gets Neil to agree to give her a bit more time with her cases so she can dig in further. Plus, Dan takes a stroll through Harry’s old chambers and asks a janitor if he should open up his heart again and risk being hurt. The janitor is too busy disposing of dead birds to help, though, and when Dan opens up a box of Harry’s things, a bunch of spring-loaded snakes pop out in his face. Classic Harry.

Next thing we know, Dan shows up in court with a freshly shorn beard and ready to act as the court’s public defender — for a few days, at least. He’s tasked with defending a trenchcoat-clad flasher, and he thunderously lists off the reasons why the man should be harshly condemned… before remembering he’s not the prosecutor anymore. He quickly switches gears and defends the man — who, of course, flashes Abby and the rest of the court before he leaves. This is Night Court, after all.

Alright, time to render your verdict: Give the Night Court premiere a grade in our poll, and then hit the comments to share your thoughts.