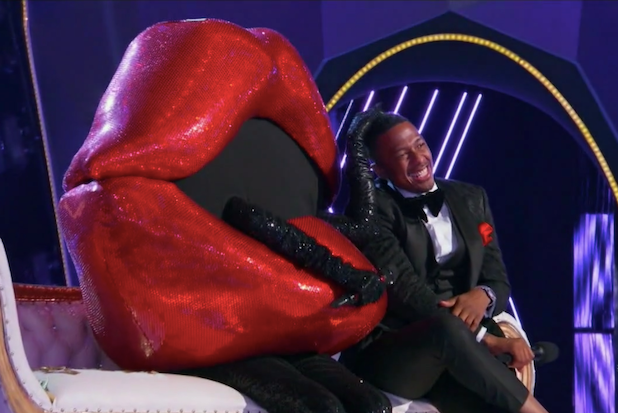 (Warning: This post contains spoilers for Wednesday’s episode of “The Masked Singer.”)

Wendy Williams was revealed to be the celeb underneath the Lips costume on tonight’s episode of “The Masked Singer,” but based on how “frisky” the talk-show host got with Nick Cannon, Ken Jeong’s first guess was his ex Mariah Carey.

“I think we should just maybe start over like next episode… I feel very embarrassed about this one,” Jeong said before Cannon read off the panelist’s guess. “The Masked Singer” host instantly laughed and asked if this was due to his “familiarity” with the Lips while they were sitting together on a couch after she performed.

Yes, it Jeong confirmed it was “just because you *kissed*” and apologized profusely for what would turn out to be a very incorrect guess. But we’re not going to call Jeong’s first pick — he ended up going with Allison Janey as his final answer, which was still wrong — totally crazy, because “The Wendy Williams Show” host told TheWrap just how comfy she and Nick were while shooting the show because he knew who she was right away.

“Well, Nick knew immediately who I was. He always comes out and sits next to the person on the couch in the costume. He’s like, I know who this is immediately. So the giggling and the familiarity goes on. And I said, ‘Uh-uh, uh-uh. Stop.’ And it was just a lot of fun.”

When Williams was unmasked and the topic of Carey came up again, she didn’t miss a beat asking Cannon, “Are you going to get back together with her eventually?” Obviously, that got a big laugh from the panelists and Cannon himself.

Williams told TheWrap she decided to go on “The Masked Singer” amid the pandemic for multiple reasons.

“This is something I want to do right now. ‘The Masked Singer’ is in its fourth season. I love all of the judges. I know all of them except for I never met Ken. But he’s funny. I needed to get closer to him, when I watch the show I say, ‘Oh, he’s so funny.’ And I know Nick. And I was nervous about traveling, but they kept it so sanitized. So sanitized.”

The talk-show queen sang Odyssey’s “Native New Yorker” as her one and only performance before being eliminated, a choice that is near and dear to her heart.

“I love that song. I’ve sung it before, a couple of lines on my own show,” Williams said. “I need to hear it at least once a week. And that’s just a New York girl’s song. And I sing in my talking voice. And I might have giggled in between and some of the things that I do on my talk show, so for those who know me will say, ‘OK, that’s Wendy. When did we go out there? Wait, but that can’t be her because she wouldn’t do something this daring.’ But yeah, I did it. And I loved it!”

“The Masked Singer” airs Wednesdays at 8/7c on Fox.