Louise Minchin interviewed Ben Wallace MP on BBC Breakfast and the politician was there to talk about HMS Queen Elizabeth’s latest voyage but the presenter was determined to discuss Boris Johnson’s flat refurbishment. Those watching at home grew irritated with Minchin when she referred to the refurbishment four times despite the Defence Secretary suggesting the Prime Minister had paid for the changes from “his own money”. To add to this, when Minchin asked about the comment “let the bodies pile high in their thousands” which was supposedly made by the leader of the Conservative Party in regards to the coronavirus pandemic, Wallace hit back and argued because the comment wasn’t backed by names it wasn’t “solid journalism”.

Minchin said: “There have been repeated claims about the refurbishment of the Prime Minister’s flat. So a few questions, just to be clear. Where did the money come from to pay the bill?”

“The Prime Minister has paid the bill on top of the £30,000 allowance that comes from the taxpayer which most Prime Minister’s have taken advantage of in the past and he’s paid the money,” Wallace replied.

“Okay, so you say he’s paid the money, was it originally a loan?” the presenter asked.

“There has been a lawyer appointed to look at the process, obviously the electoral commission, it’s been reported the media are engaging with both the Tory Party and there will be a number of enquiries going on in parliament and I think these answers will come out in the future. 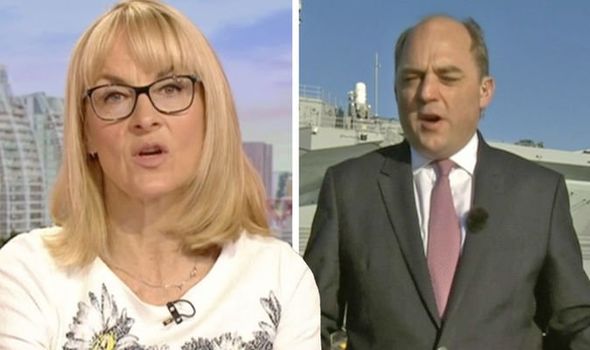 “Plus the Cabinet Office reports will show different expenditure and recently the Prime Minister answered a parliamentary question on it.”

Minchin commented: “So just to be clear, you don’t know that it was originally a loan from a Conservative Party donor?”

“What I do know is the Prime Minister has paid for it, from his own money,” Wallace repeated.

“All the rest is speculation and to be brutally honest, who pays for the Prime Minister’s flat, it’s the Prime Minister who is paying for his flat and I’m the Defence Secretary and I’m here focussing on our aircraft carriers.

“You can ask me all day, ‘do I know how the flat was paid for’ the Prime Minster has been clear; he paid for the flat and that’s it.”

BBC Breakfast viewers heard Minchin say: “I have to ask you again, because if it was a loan, if it was a donation in the first instance, it should’ve been declared?” 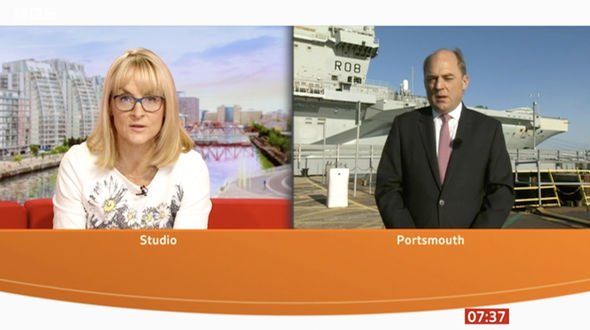 “At all times the Prime Minister has complied with the rules, he’s paid for it out of his own money and obviously, as I said there have been both reports, the Electoral Commission both talking to the Tory Party and indeed, the Prime Minister has appointed a solicitor to look at the process,” Wallace explained.

“I think there’s been lots of airing of this, I’m sure there will be more airing of this in the future, but as far as I know, I certainly fully support my Prime Minister, he has paid for it out of his own money.

“How they got to that point, there’s huge amounts of speculation, going round in circles, what I do know he did the right thing and paid for it out of his own money.”

Minchin finally moved on and said: “Can I just alert you, I know you’ve seen the front pages, we’ll come to what you’re doing today in a minute, but for example, the Daily Mail saying Boris Johnson, this is a quote from people who said they heard him say this; ‘Let the bodies pile high in their thousands’. There are endless things coming out. “

“He has denied it, Number 10 has denied it, we’re in a place now where we’re seriously getting mainstream media making reports about he said, she said, unnamed sources going round in circles, from advisors on advisors on advisors, frankly what I know is the Prime Minister has been utterly focused on this pandemic, just like we’re seeing now in India, the stakes are incredibly high, he has managed to lead this government through a very difficult time, a global pandemic.

“Frankly, I know it’s Oscar season but the sort of gossip columns are getting filled with such ludicrous allegations that it’s just going beyond the reality.

“I think we should focus on the facts – if you could name who said that, that would be great!” Wallace continued.

“Maybe we could have a discussion…that’s where we’re at Louise; unnamed people talking about unnamed conversations with different people and that really isn’t solid journalism.

“If you want to tell me who said it then we can discuss that.,” and Minchin moved the interview onto the reason why Wallace was on BBC Breakfast, to discuss the HMS Queen Elizabeth carrier.

Those watching at home were infuriated by Minchin’s constant questioning over the refurbishment of Johnson’s flat and took to Twitter to complain.

“@louiseminchin How many times ….HE PAID WITH HIS OWN MONEY,” one shouted.

Another wrote: “@BBCBreakfast NO ONE GIVES A F**K!!!!!, can we just listen about the Aircraft carrier.”

“@BBCBreakfast Stop repeating your questions when the minister says he cannot say anything else,” someone else mentioned.

A fourth added: “@BBCBreakfast How desperate is Louise to find out about the PM getting a loan.”

“Please stop going on about the flat it’s starting to sound more pathetic than ever you have real things to talk about never mind some decorating. @BBCBreakfast,” a tweet read.

“Oh dear @BWallaceMP just handed @louiseminchin her a*** on a plate on @BBCBreakfast. Loved him calling out the poor journalism of some of her questions @mrdanwalker,” another mentioned.

Like several of the other Prime Ministers, Johnson and his fiancée Carrie Symonds are living in a flat about No 11 Downing Street.

It is a four-bedroom flat and has had periodic improvements made to it in the past.

The Grade I listed building is owned by the UK government but Prime Ministers can live there while they are in power.

The flat was extensively refurbished by David Cameron and his wife Samantha back in 2011, and it cost £30,000.

Prime Ministers receive an annual allowance of up to £30,000 a year from taxpayers to contribute towards the costs of maintenance and furnishing the Downing Street flat.

However, questions have been raised as to how much Johnson’s refurbishment has cost with the BBC reporting speculation for the final bill could be up to £200,000.

BBC Breakfast airs every day at 6am on BBC One.