HBO’s smash hit The White Lotus recently won big at the Emmys, taking home more gold men than any other series this year: 10 total! The series follows the wealthy guests and high-strung staff of a luxury resort, but the show is honestly less about what happens on vacation and more about the neuroses and emotional triggers guests pack in their carry-ons, crawling out to tango with those of other guests over a shared breakfast buffet.

Season 1 took place on the beaches of Hawaii, while season 2 (which premieres on October 30) takes place in Sicily. Before we check-in for our next vacation, let’s remember what happened last time with a handy White Lotus season 1 recap.

How Did Season 1 of The White Lotus End?

The pilot of The White Lotus opens at the ending: in the airport with one of our guests Shane (Jake Lacy) looking sour and solo without his new bride, and a dead body being loaded onto the plane. We then spend the following six episodes watching swirling social dynamics spin out of control, meeting their climactic (and deadly) end.

By episode 6, our guests and staff members have almost spun out completely. Resort manager Armond is high off Olivia’s supply and reaching a boiling point in his passive aggressive war with corny himbo Shane. Shane’s new wife Rachel has reached the apex of her identity crisis as a new trophy wife. Belinda is eager to build a wellness empire with the help of a flighty, unreliable Tanya. And resort worker, Hawaiian native, and Paula’s vacation fling, Kai, has been caught trying to rob the Mossbachers.

Season 1 ends like this: despite Rachel telling Shane she regrets marrying him, she decides to stay with him and meets him at the airport. On the final day of his honeymoon, Shane gets Armond fired by telling a travel agent about the Mossbachers’ robbery. Armond spends his last day getting higher than ever before and sneaks into Shane’s room to, erm, leave his mark in his suitcase. While in the room, Shane returns and stabs him instinctively, thinking he is an intruder. So the body from the start of the season is none other than the lovable, occasionally evil, unhinged resort manager, Armond. 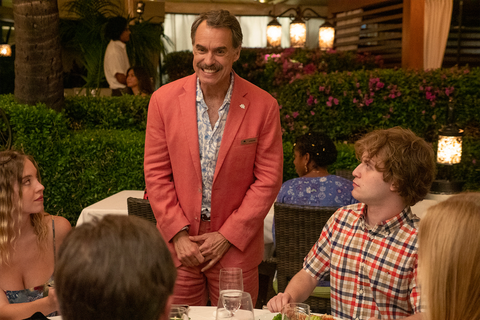 The season ends somewhat beautifully, as the Mossbachers board the plane and their son Quinn flees the airport to join a group of Hawaiian surfers, floating into the sunset sans-iPad.

What Will We See in Season 2?

Season 2 is bringing a new cast of arrivals to The White Lotus, save for one familiar face: Jennifer Coolidge’s Tanya McQuoid, a White Lotus loyalist. The new guests include Aubrey Plaza, Michael Imperioli, Theo James, and Meghann Fahy.

The sophomore season begins in a similar fashion to the pilot, with a new boat full of arriving guests and a flash-forward to a dead body. Critics have already been raving about the new season, specifically Aubrey Plaza’s performance.

Season 2 of The White Lotus premieres on HBO Max on October 30, with new episodes released weekly.