The American actor and comic Kristen Schaal has a theory as to how she ended up being cast in the second season of the ABC’s commuter comedy Squinters. “I assume they asked a lot of people who said no, and then they finally got all the way to me and I said 'yes,” says Schaal with a typically cheerful and mischievous sense of self-deprecation. 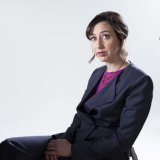 With her now trademark voice as her calling card – you can’t mistake the perpetual sharp high pitch, the gassy hint of helium, and the snappy and unfailingly amusing tone – the 41-year-old Schaal has contributed a long line of television comedies since she added an extra edge of absurdism to Flight of the Conchords in her 2007 breakthrough role as the New Zealand duo’s one and only obsessive fan, Mel.

Since then Schaal has been the voice of Louise Belcher on the animated hit Bob’s Burgers, had a long-standing stint as a comic commentator on The Daily Show, done a season of 30 Rock, guested on The Simpsons and Glee, and been the foil for Will Forte’s doofus on the comedy Last Man on Earth (which has finally reached Australia via SBS on Demand and SBS Viceland). If it’s funny and produced in America, chances are Schaal has been a part of it.

“I always hoped I would make it in television because I really loved acting,” says Schaal, who grew up in Colorado and got her start after university as a stand-up comic in New York. “One of the reasons I did stand-up was because it let me perform, and be the boss of when I get to perform, but I never thought it would turn out like this.”

Created by Trent O’Donnell (The Moodys, No Activity) and Adam Zwar (Wilfred, Mr Black), Squinters was one of the best new comedies of 2018. Infused with equal parts exasperation and escape, it turned the car journeys to and from work for the various staff members – played by the likes of Jacki Weaver, Tim Minchin, and Mindy McElhinney – of a Sydney-based company into a kind of mobile confessional. The close confines and perpetual workplace irritation acts as an often hilarious accelerant.

By virtue of O’Donnell’s work in Los Angeles, where he’s a busy director of sitcoms, Squinters is a trans-Pacific production, allowing the first season finale – the company is bought out by an American firm – to segue into season two’s arrival of Schaal’s Tina, the newly imposed CEO who is getting to grips with Australia’s disgraceful employment laws (she can’t just fire people) and her conscientious new driver, Stephen Peacocke’s Brett.

“I didn’t know who would play the part of Brett because it was a last-minute thing pulling all the schedules together,” Schaal says. “I just remember when [Peacocke] walked into the studio I hadn’t seen him before and I thought, ‘He looks like Hugh Grant with a lot more muscles’.” 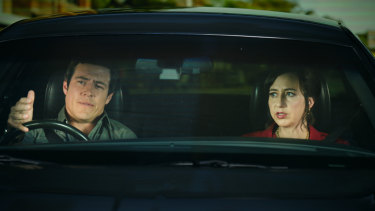 “He looks like Hugh Grant with a lot more muscles,” says Schaal of her Squinters co-star Stephen Peacocke.Credit:ABC

Schaal and Peacocke shot their scenes over a two-day period in Los Angeles at the end of 2018. Because the concept basically requires a modified vehicle for the actors and a green screen behind them, it’s a quick production, although the sequences involving Tina and Brett were delayed while the American car earmarked for their scenes was converted from a left-hand drive to right.

“It’s really fun to plough through, although you have to give breaks to the crew,” says Schaal. “We conquered as much as we could in every session, then we’d go and change into a different outfit or tease the hair a little bit so we could get back into the car to shoot the drive home or another day. In some ways it felt like you were back doing a play.”

Tina introduces herself to Brett with a horrible Strine whine of “g’day cobber!” and while the character makes use of Schaal’s knack for awkward over-enthusiasm, Tina’s authority makes for an intimidating edge that’s rare in Schaal’s work. “She’s hard-nosed,” is how Schaal puts it, and it’s a delight watching her intimidate the physically imposing Peacocke.

“We had the script, but everyone was also trying to find new jokes throughout the process. I like that as it is fun for me when you can try things in a scene and the vibe on set is to improvise,” says Schaal. “You just need to let go of whatever you’re sticking to and just go with the moment. It’s easy with this show because it’s just you and one other person – you don’t even have to walk anywhere to get to a new location. It’s perfectly set up for these playful moments.” 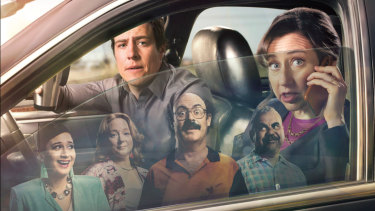 The cast of season 2 of Squinters.Credit:ABC

It turns out that Schaal’s casting might be explained by her cadre of Australian comic friends  whom she sees regularly in Los Angeles, including returning Squinters driver Sam Simmons and Schaal’s fellow season two addition Claudia O’Doherty. Once she watched the first season she was delighted to participate, while thankful that technology meant that she didn’t have to leave Los Angeles to appear in an Australian production.

“If this had happened two years ago I would have hoped I got a trip to Australia out of it, but I have a one-year-old baby so travel is difficult and we’re trying to stay in Los Angeles, even though I miss Australia,” says Schaal. “I’d have to read a lot of parenting books before attempting a flight that long with a baby. Or fly the plane myself.”