Editor’s Note: Spoilers for the series finale are included.

The Annie Murphy-starring AMC series “Kevin Can F**k Himself” hinges on an interesting gimmick: What if a woman was the wife of a sitcom character, but in her moments alone she was just an average woman desperate to leave a dying, toxic marriage? Season 1 focused heavily on this conceit, with Allison McRoberts (Murphy) desperate to kill her bumbling, one-note sitcom stereotype husband Kevin (Eric Petersen) in order to free herself. But with the Season 1 finale, and the reveal that AMC was canceling the show after Season 2, a shift was felt.

Season 2 of “Kevin” understands, like its main character, there needs to be honesty. Where Allison spent last season contemplating killing herself, now she’s actively planning to kill herself (or at least faking it to start somewhere new). Compared to last season, this season’s Allison doesn’t want to make a flamboyant statement with her actions. She wants to find a new identity and get the hell out of Wooster.

As a character, Allison is a mess and it’s through Murphy’s bright smile and affability that the audience still sticks with her. What’s different this season is that gone is Allison’s woe-is-me attitude. It’s not enough to blame her problems on Kevin. Now she’s hoping to “introduce” her problems to Kevin and at least exploit him to make them go away, whether by making Kevin fake a personal injury complaint so her friend/former lover Sam (Raymond Lee) can keep his diner or making Kevin think he’s a prime suspect in an arson case. Kevin may be manipulative in a sitcom sense, but here we see Allison truly use Kevin to fix things in her life as quickly as possible. The only place where Allison can think about something (or someone) other than herself is with her best friend Patti (Mary Hollis Inboden).

The strongest relationship this season is that of Patti and Allison. Inboden and Murphy aren’t your typical mismatched friends. Their chemistry intensifies the script’s awareness of how these two women truly understand each other. Much of this season is about change, including Patti’s growing relationship with Detective Tammy (Candice Coke), who wants Patti to put Allison aside and start a life with her. But Allison’s presence is what chronically drives a wedge between Patti and Tammy. The simple act of cooking breakfast sees them not knowing which way to turn, constantly bumping into each other. With Allison, Patti doesn’t have to be on. She can just sit and smoke a cigarette and know Allison is there for her. 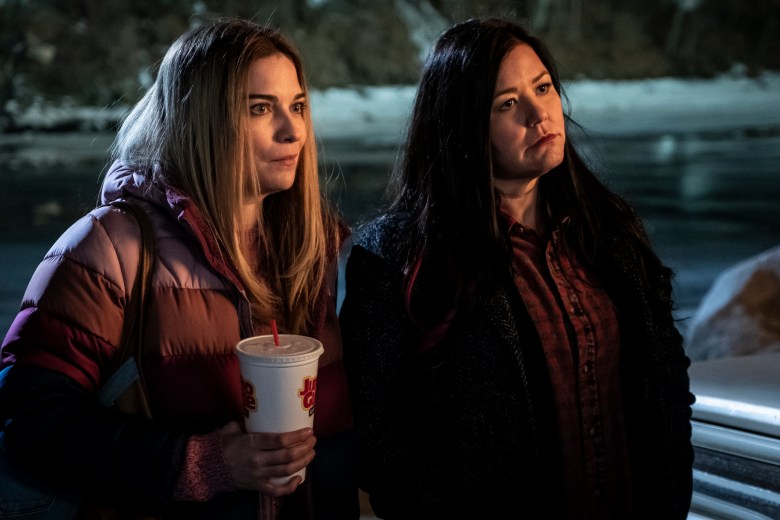 “Kevin Can F**k Himself”

By relying on Patti and Allison for the entirety of the season it takes away Kevin’s power by isolating him. Lose the people he can make fun of and he’s only left to look at himself. It also takes away the people who find Kevin’s life to be special. If there’s no audience for Kevin, then he’s just…a regular guy. It’s hilarious watching Petersen continue to play Kevin, a bumbling oaf whose mean-spirited comments drew applause from the unseen audience in Season 1. In several instances this season, the bright sitcom lighting and editing go away, leaving many of the characters mired in their own personal hells. We see it with Neil, whose actions last season caused him to wonder what his role is outside of being Kevin’s friend. Alexi Bonifer goes from playing Neil as a doddering schlub to a 36-year-old man wondering who he is as a person.

But who is Kevin without the people he hurts? With Allison exploring faking her death, creator Valerie Armstrong and crew go back to the beginning. Episode 2 sees Allison reminisce about the night she met Kevin after her father’s funeral. Murphy shows how Allison was suppressing her feelings even before Kevin arrived. In fact, the scene is filmed like Kevin’s sitcom, with her mother the first example of a Kevin-type Allison encountered: someone who would berate her and make her feel small for their own selfish ego. The show reminds the audience that Kevin isn’t anyone special. We encounter Kevins throughout our lives. Allison, like Dorothy in Oz, has always had the power to leave, just not the strength.

The season brings everything home in the finale, literally, giving Petersen an amazing moment to do some truly great acting. He and Murphy have spent two season playing characters who don’t share intimacy, common interests, or love. But in the series finale, appropriately titled “Allison’s House,” that changes. With the conceit removed, Petersen is left to play Kevin for the mean, manipulative person we’ve always known he is. But without an audience he’s pathetic yet genuinely frightening. If there’s something intimate to be felt between the pair it’s in Petersen’s ability to play Kevin as a man who knows his wife’s weaknesses. He goes out on a high note, even though Allison gets the last laugh.

There’s certainly a tidy ending that plays out on “Kevin Can F**k Himself,” but it does come at the expense of some story resolution. If you thought Nick (Robin Lord Taylor), the drug dealer who tried to kill Kevin last season and was in a coma, would come back to make things difficult, that’s ended with a stray line of dialogue at season’s end. Tammy, our intrepid detective, hits a brick wall that the series leaves up. And Kevin’s ill-fated run for city council vanishes into the ether. It’s clear much had to be condensed to end things appropriately and it ends up working in the series’ favor. The end of the road seems like it was always planned to champion Allison finding her own way in life. Who cares if the creators decided not to gild the lily with last season’s story beats?

“Kevin Can F*** Himself” Season 2 is a fine farewell for a series that didn’t get enough time to develop. Thankfully, its cast, especially Murphy and Inboden, kept things buoyant and truly make the final scene one to remember. “Kevin Can F*** Himself” made fans reevaluate sitcoms while telling a nuanced story about female friendship, misogyny, and toxicity. Allison was never a perfect heroine, but the show says that didn’t matter. Her dreams are as valid as anyone’s, and the fact that she gets to live them on her own terms is the best happy ending around.