Katie Price has shared how hard she finds it being separate from her son Harvey while he’s at a residential college, explaining that she can’t drive to him until her driving ban has ended.

On Monday’s edition of Good Morning Britain, Katie made an appearance on the show to speak to Alastair Campbell and Susanna Reid with her rarely-seen half-sister, Sophie Price.

The siblings are going into business together, expressing their excitement over their joint venture to create a baby clothing company.

Earlier this month, Katie, 43, and Harvey, 19, were seen at the National Television Awards, where their documentary Harvey and Me was nominated in the authored documentary category, losing to Kate Garraway’s film on her husband, Finding Derek.

Speaking on GMB, Katie said that Harvey is now in Cheltenham and he regularly calls her up to ask for ‘kisses and cuddles’.

‘Harvey’s in Cheltenham now. He keeps ringing me saying, “Mummy I miss you, I need kisses and cuddles”,’ she said. 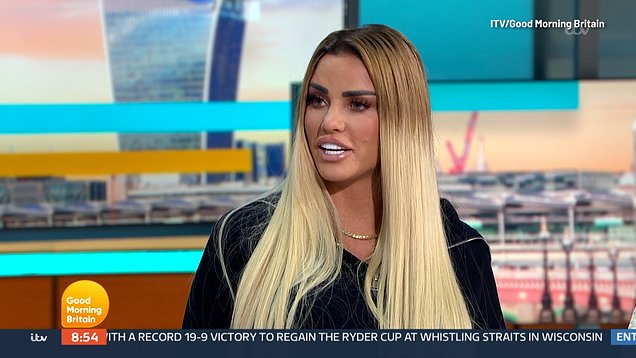 ‘So it is quite hard because obviously I don’t get my licence back till December, so I can’t just whizz in the car there, and it’s not close.’

Katie added that Harvey is taking part in a talent show at the weekend, where he’ll be able to showcase his musical skills.

‘He’s doing Autism’s Got Talent on Sunday where he’s playing the keyboard, so I’ve told him to start learning a tune,’ she said with pride.

In Harvey and Me, Katie spent time looking at schools for Harvey to attend, with the college that he has enrolled in taking around three hours to drive to from the former glamour model’s home.

A source previously told The Sun that she was ‘heartbroken’ by Harvey staying away from home, ‘but knows that Harvey will have a brilliant time at his new college’.

In April, it was announced that Katie had been banned from driving for another six months in what she claimed was an admin error.

The ban came into force in the same week that her previous 18-month ban came to an end, after she withheld the identity of the driver of her pink Range Rover during a crash in November 2018.