Who Wants to be a Millionaire: Jeremy reacts to phone a friend

Jeremy Clarkson, 60, was on hand to help another budding contestant continue their journey on Who Wants To Be A Millionaire after they started their jackpot in a previous episode. With the ITV quiz show in full swing, the player was given a question about sport and in particular, football. Although they had some knowledge, they thought they’d use their Phone A Friend lifeline to be definite of their answer. However, the presenter wasn’t impressed with the caller’s etiquette.

The question the contestant was asked was: “Which of these managed the men’s England Football team for the longest period of time?”

Although there were four options, the player asked the potential answers to be cut down to two and his request was met thanks to his 50/50 lifeline.

This meant he had to choose between Bobby Robson and Fabio Capello but with £32,000 to play for, he was nervous about which one to select.

Riding his friend, the amateur quizzer read the question quickly as the 30-second countdown had begun.

Unfortunately, the person at the other end of the line also wasn’t sure and began dithering. 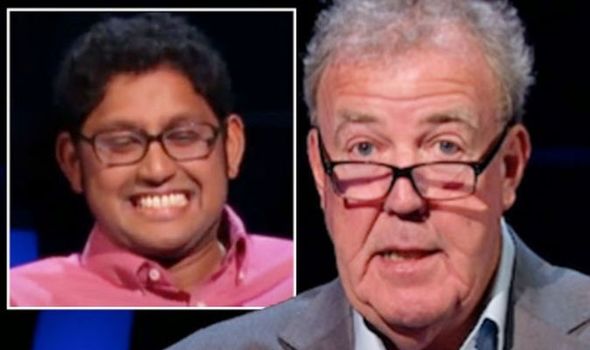 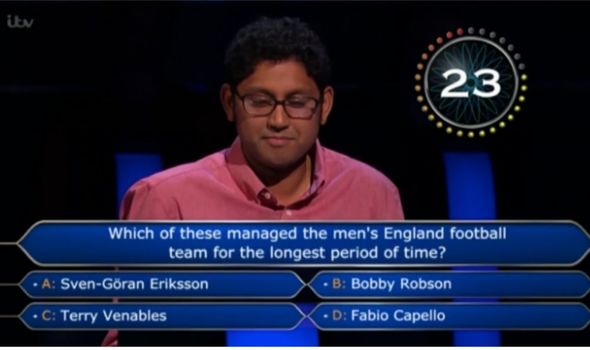 However, just when they were going to say their guess, the line was cut-off and the presenter was baffled by what had happened.

Speaking to the contestant, Jeremy berated their friend as he said: “What was it about 30 seconds he didn’t understand?

“Well, that’s annoying. He knew everything about football but that,” the host continued as he tried to get the player to focus after the call.

With no lifelines left, the contestant opted to select Fabio Capello as his final answer but unfortunately, he was wrong. 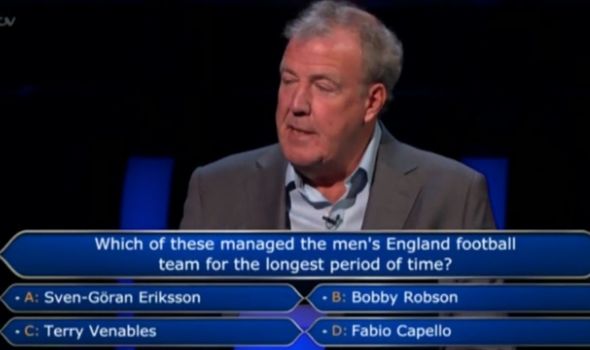 This meant he couldn’t get a higher jackpot and he had run out of lives as the presenter sent him packing.

Jeremy did stipulate he would have also chosen Fabio Capello as his answer in the hope the contestant wouldn’t be too hard on themselves.

Those watching at home seemed a bit distracted by what was happening in the studio as they couldn’t get over ITV was showing an old episode with a packed studio audience.

One viewer wrote on Twitter: “Another bloody repeat of #WhoWantsToBeAMillionaire from a few years ago… ITV really is s**t at times.”

Jeremy Clarkson discusses his decision to move to London

Another posted: “Anyone know if this is a new episode? surely not as the audience are there though? #whowantstobeamillionaire.”

Whilst a third remarked: “#whowantstobeamillionaire this is old [episdoe]… no screens and an audience laugh out loud. Pre-Covid.”

“#whowantstobeamillionaire This is not new because the [audience] are all sitting with each other,” a fourth remarked.

Despite an episode from the archives airing on Tuesday night, some instalments of the show have been filmed in the midst of the pandemic.

It was during these socially distanced scenes the show found its sixth millionaire in contestant Donald Fear.

Speaking of the astonishing victory in the midst of a pandemic, Jeremy said: “Well, I was absolutely thrilled and delighted that we’d found someone who seems to know just about everything.

“I was just in awe of this contestant and think they are probably the best the show has ever had in its 22-year history.

“It was a joy to sit and watch it unfold,” but when the series returns later this year, will another lucky contestant snatch the grand jackpot prize?

Who Wants To Be A Millionaire airs Tuesdays at 8pm on ITV.