James Martin, 48, is known for hosting his Saturday morning cooking show on ITV but he also makes appearances on This Morning as a guest chef. During one of his latest stints on the show, he was giving a demonstration on how to chop onions in the studio kitchen. It was whilst preparing his French Onion Soup did the television personality reveal his advice to those watching at home on how to avoiding shedding tears.

Slicing the root vegetable at ease, the chef said: “When you’re doing this, try not to make the slices too thick because obviously, you don’t want to eat that.”

Watching James at work, presenter Holly Willoughby, 39, asked whether he was going to start crying as he was cutting a selection of red onions.

The restauranteur explained he wasn’t going to be shedding any tears as he talked through how he avoids the waterworks.

“The key to chopping an onion is to stand on a stool because you’re cutting away from it. Mainly, make sure you’ve got a nice, sharp knife.

“It’s the spray from the onion when you’ve got a blunt knife which causes you to cry,” he added as he uncovered a long harboured kitchen secret. 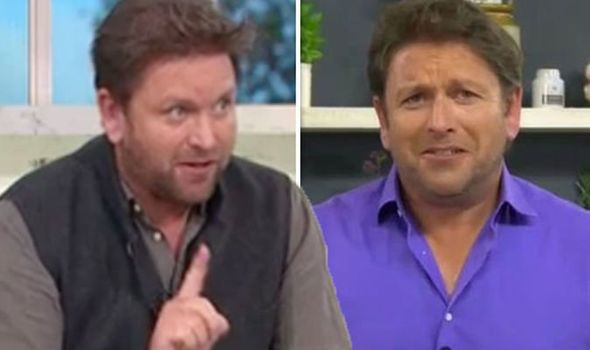 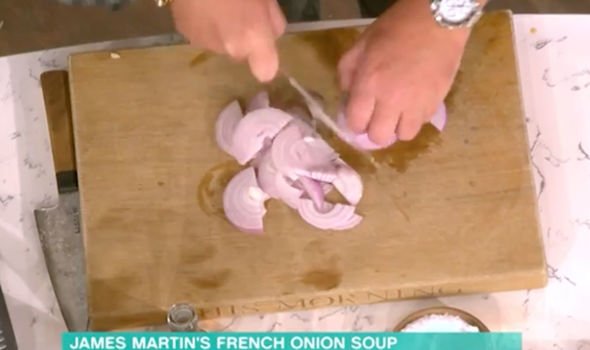 Holly then explained her mother used to put a slice of bread in her mouth to avoid crying, which James said could have been to stop the spray from the onion.

The chef then talked the presenters through the rest of the recipe, which included putting the onions in a saucepan with butter, garlic and thyme.

When the ingredients were coloured, the television personality then added 50ml of sherry, 50ml of white wine, 25ml of brandy and 500ml beef stock.

With a base made, he then proceeded to season the mixture with sugar, salt and pepper, leaving it to simmer for 10-15 minutes. 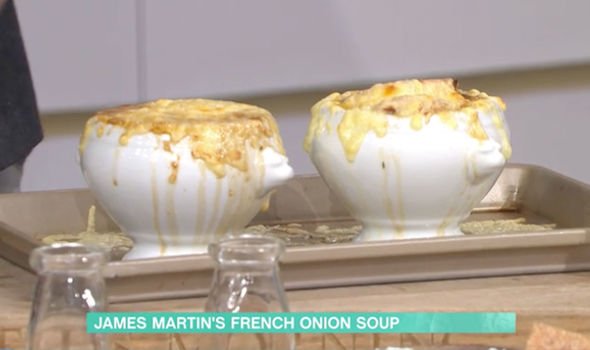 You don’t want to eat that

However, James told the presenters the soup should be served with some cheese croutons which were just as easy to make as the mixture cooking away.

The chef cut up four slices of baguette and covered them with grated Emmental and Gruyere cheese, before placing them under a grill.

For the cheese to melt, he told the presenters to only leave the bread under the heat for about two minutes.

With the soup made, he advised those watching along at home to serve the mixture into bowls and place the croutons on top.

One viewer took to Twitter in response to the chef making a traditional French Onion Soup on the daytime show.

They wrote: “@thismorning just seen James Martin making french onion soup, does he know if due to amount of seasoning added, this is why you cannot buy tins/packets of french onion soup anymore.

“Miss the Heinz one and Knorr packet,” they continued.

The chef is quite well known for not holding back when it comes to adding butter to a variety of his staple dishes.

Asked whether he would ever consider writing a diet cookbook, James remarked: “Not as long as my family were alive.

“They’d probably disown me,” he explained as the son of a pig farmer who was taught to cook by his mother in Yorkshire.

“There are people out there who see food as fuel and don’t enjoy it. I was brought up on a farm. We produce food – that’s what we do.”

James went on to tell iNews he “wouldn’t survive” on a vegan diet, using meat or some sort of animal product in a variety of his best-known dishes.