But the ageing members of Kiss reckon they still love a Crazy Night — and, 45 years after they first got together, the band have announced a year-long farewell tour. 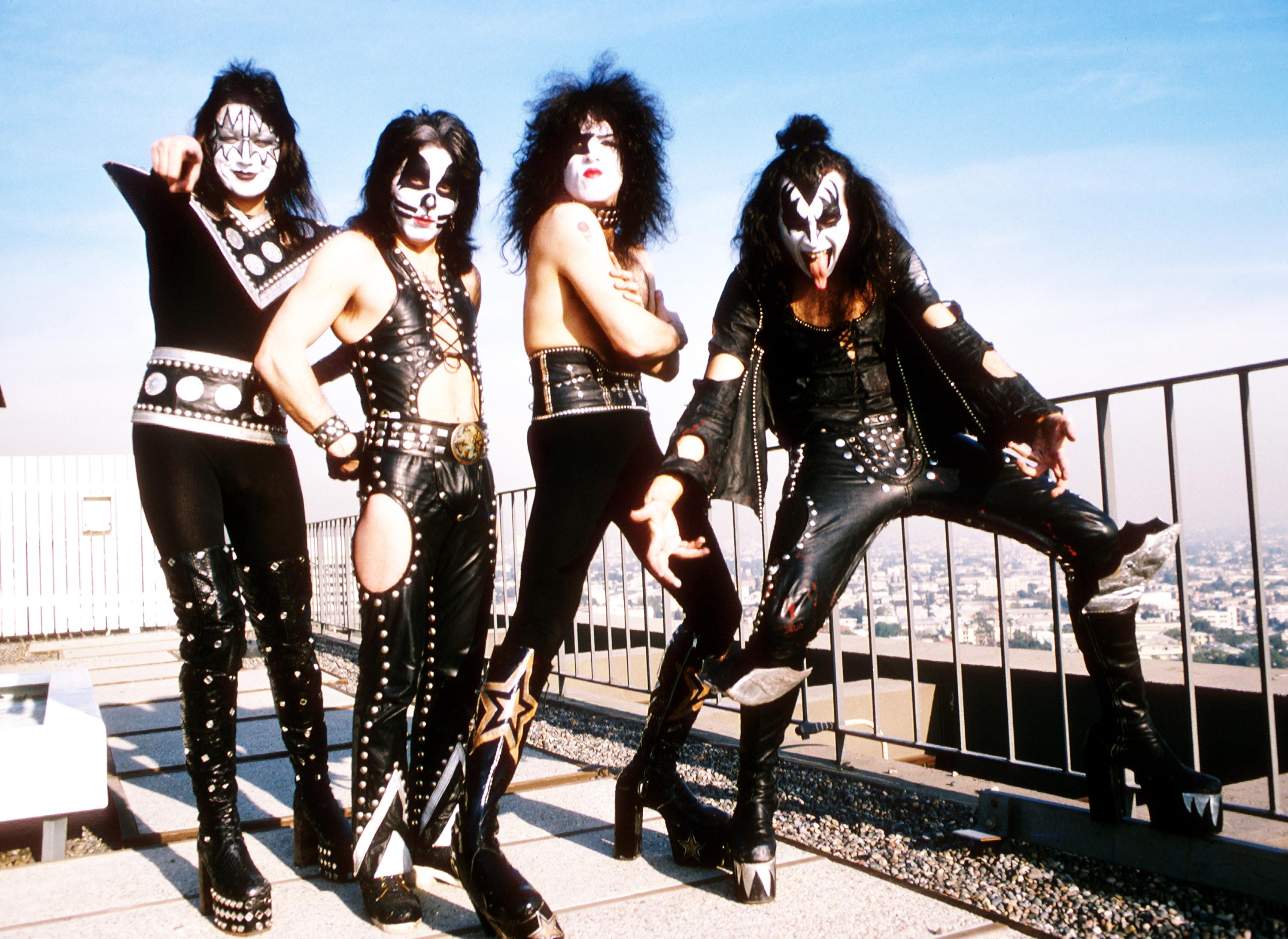 Then there is the problem of one half of the band being barely on speaking terms with the other.

The latter two were kicked out of the band in the early Eighties for unprofessional behaviour — quite a feat for a group infamous for relishing wild rock’n’roll ways. 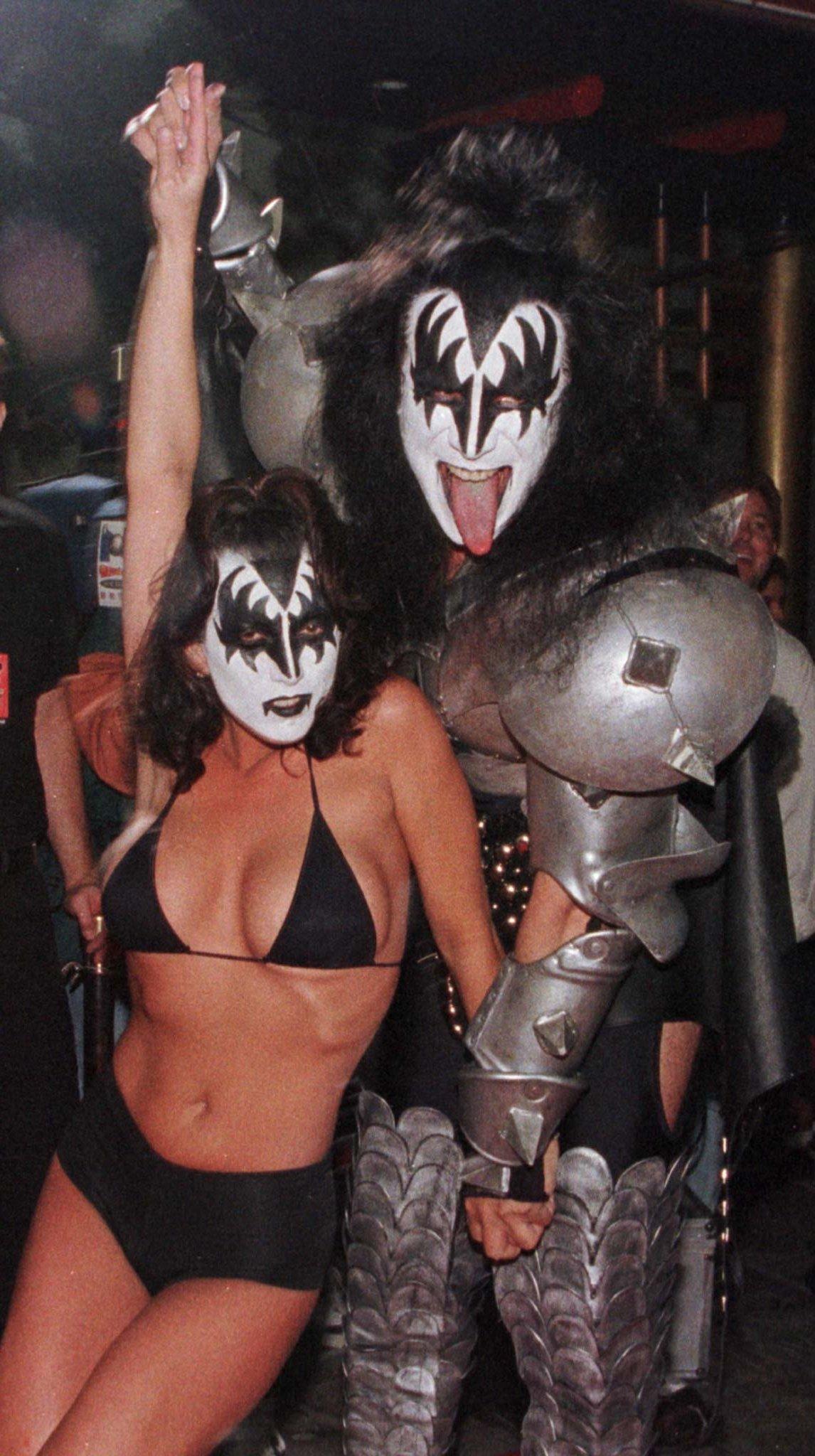 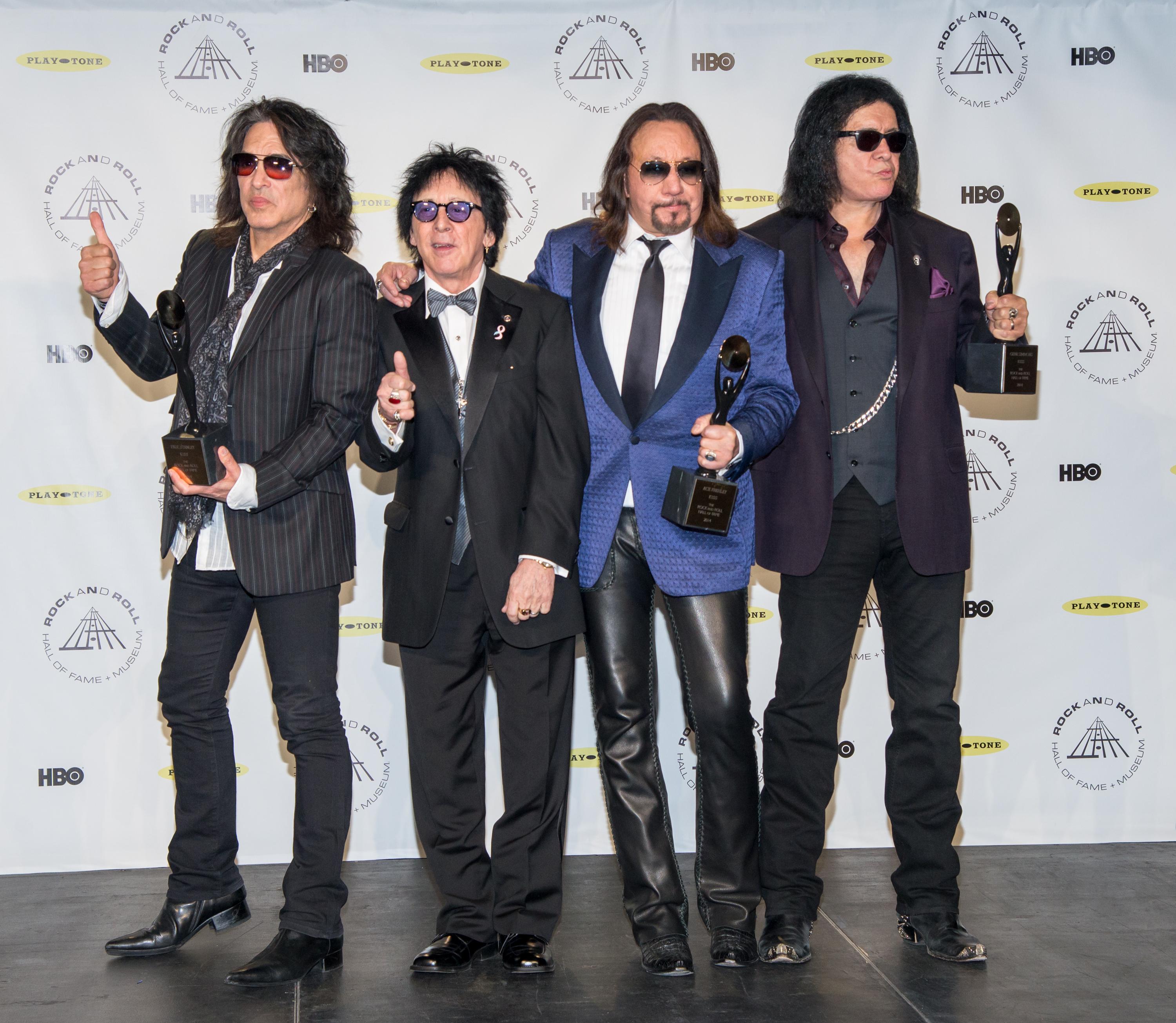 But Paul, now 66, has said of getting the four original bandmembers back for the tour: “I wouldn’t discount any possibilities.”

Reviving the original line-up would be a huge money-spinner for a band long happy to cash in on everything from Kiss toilet paper and condoms to credit cards and even coffins.

And Ace at least has admitted the error of his old ways.

The 67-year-old says: “I can’t deny that my drinking and drug use eventually became highly disruptive and problematic.

“Considering all the crazy things I’ve done in my life, by all rights I shouldn’t even be alive. Car accidents, drug overdoses, you name it, I’ve been there. Thrown in jail.”

Ace, the one with the silver-star eye make-up, and Peter — with the cat whiskers — did rejoin the group for a 1996 reunion tour.

And that has raised hopes that the pair will also take part in the upcoming End Of The Road tour, rather than the less well-known musicians who replaced them when they left.

The official line-up for the tour, which will include dates in the UK next summer, has not been released — despite Paul’s hints. 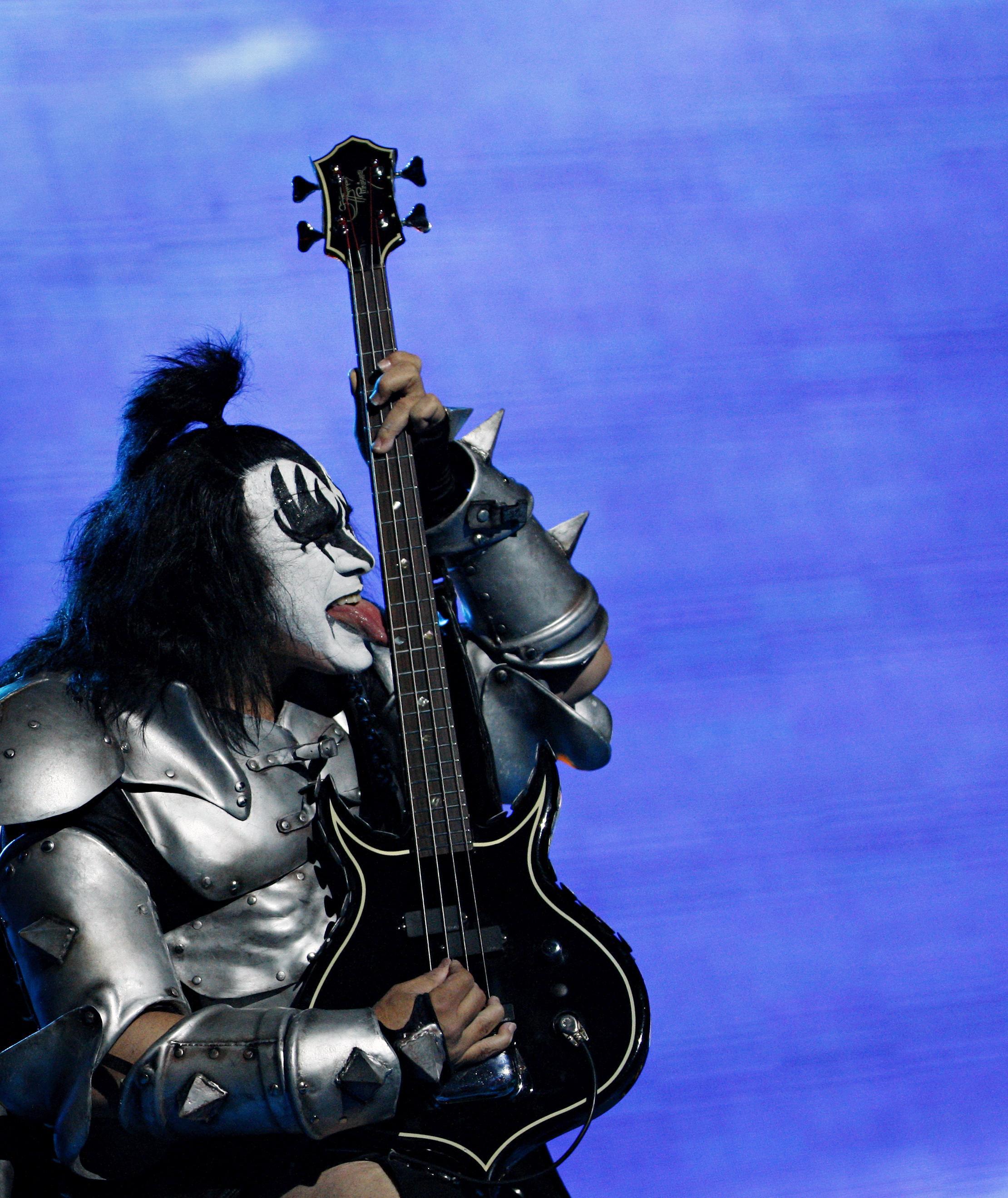 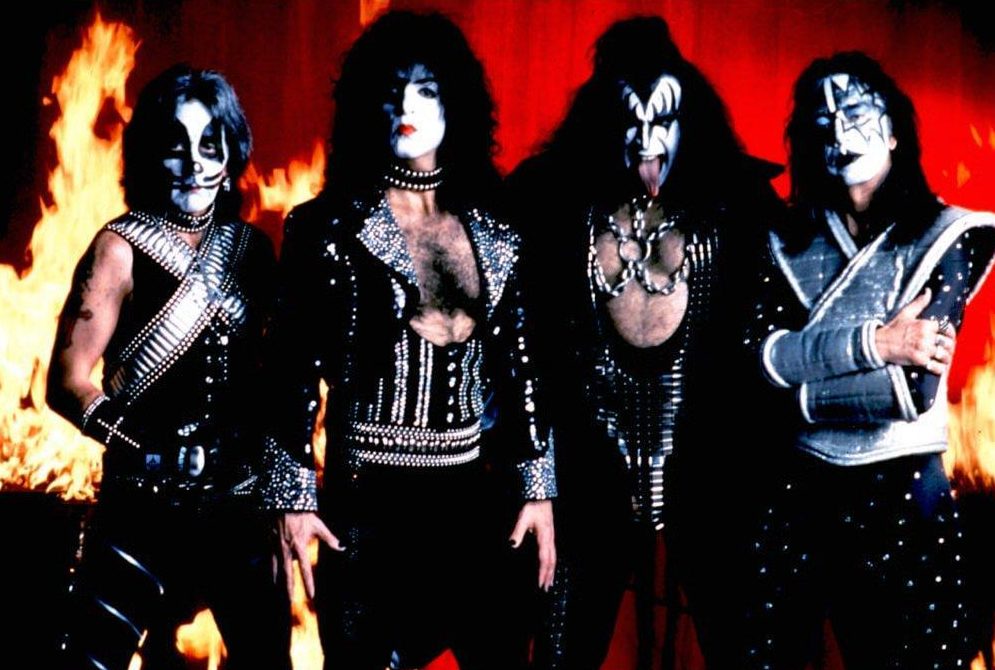 But a love-in could well be on the cards, with Kiss members far more mild than wild these days.

And Paul — the one with a black star painted over one eye — reckons they all want one more shot at a perfect rock show before their bodies give out.

The singer, who blames his two hip ops on stomping around on stage in stacked heels, said: “We want to do it while we feel great as opposed to letting things deteriorate.”

And he is working hard to keep his voice strong, explaining: “I’m doing heat therapies and all kinds of ultrasound and light therapies and stuff, just to keep the cords.”

These days the father of four spends much of his time making art, creating paintings with titles like Infinite Solitude, which he sells for thousands of pounds.

Meanwhile 69-year-old Gene has become a business guru, owning a chain of restaurants.

He is also a keen jogger and — most shocking of all — is quietly and happily married.

This is a huge turnaround for the man who used to boast that he had slept with around 4,800 women. 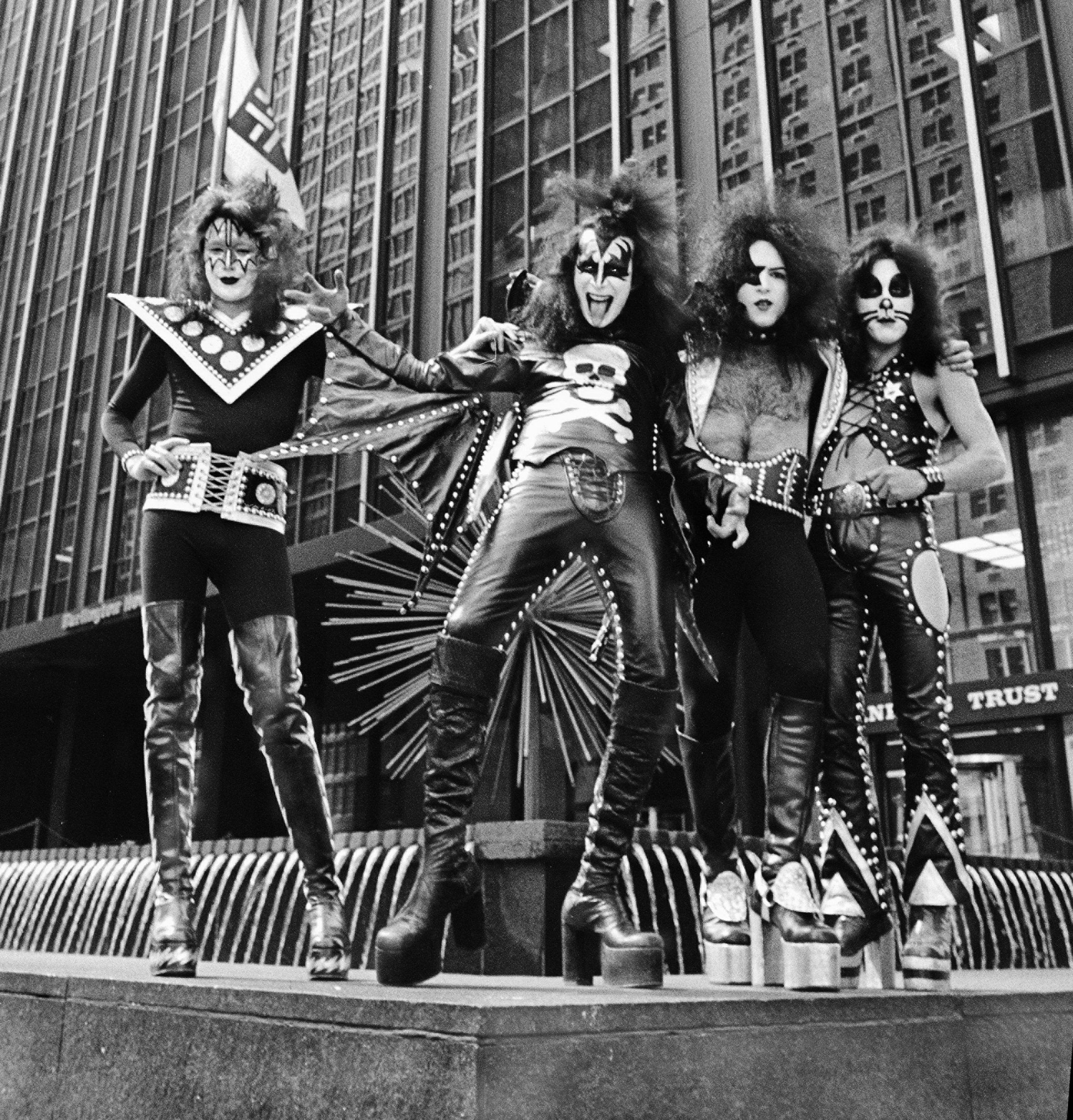 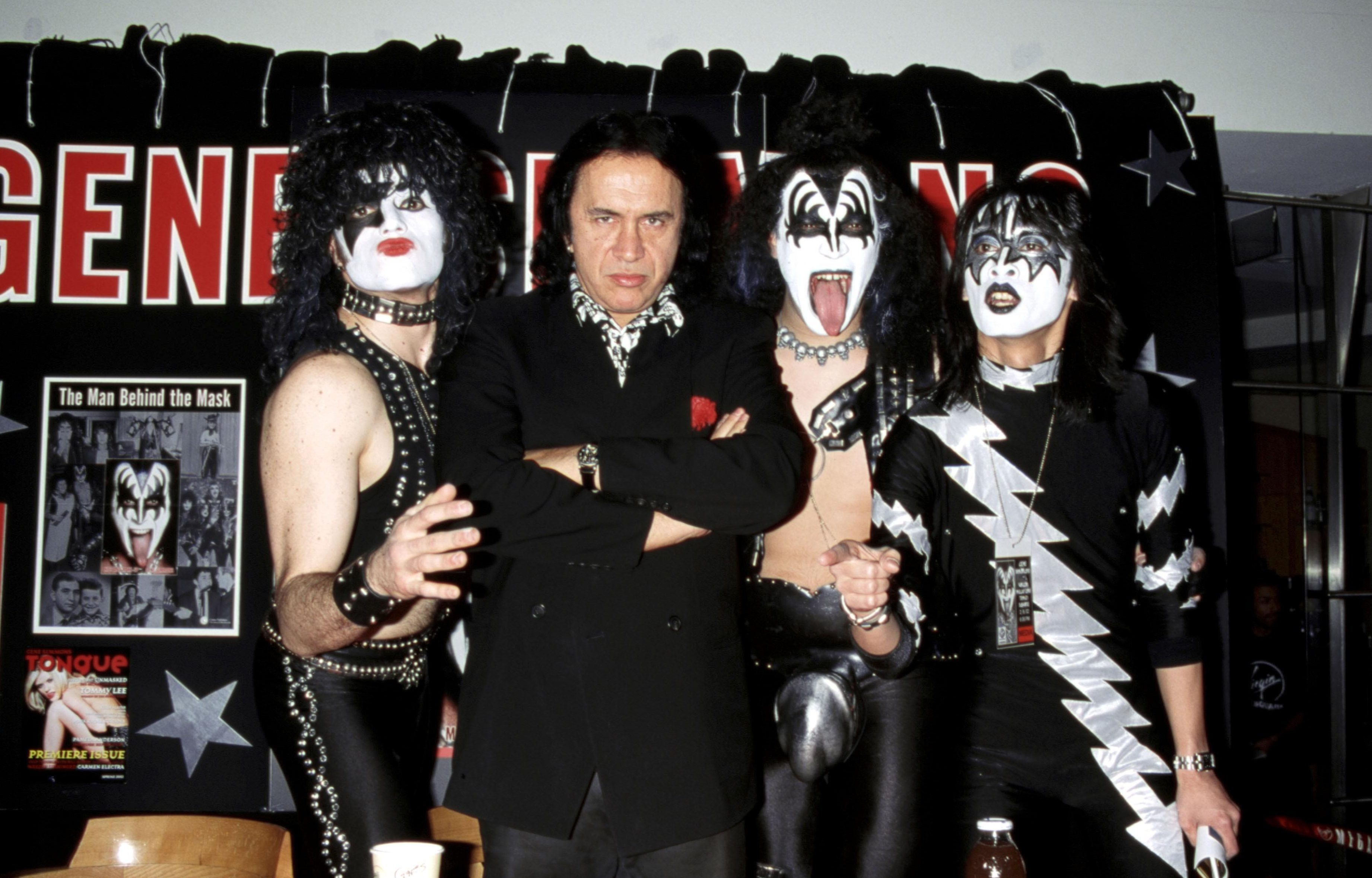 High-profile lovers included fellow superstars Cher and Diana Ross. He has also told how groupies would wear his trademark black and white face paint during sex — and one even had his image inked in a very intimate spot.

Gene explained: “I have painted it on women’s faces who wanted to wear it for the sex. Once I had a girl who had a tattoo of my face between her legs. I just felt sorry for her boyfriends.” The rest of the band also suffered because of his sexual appetite. Once the whole group caught pubic lice after Gene’s infected leather suit was packed in with their own costumes.

These days, Gene’s legendary appetite is all about making money.

The band has 3,000 licensing agreements and, thanks to Gene’s commercial wizardry, is reportedly worth £800million. 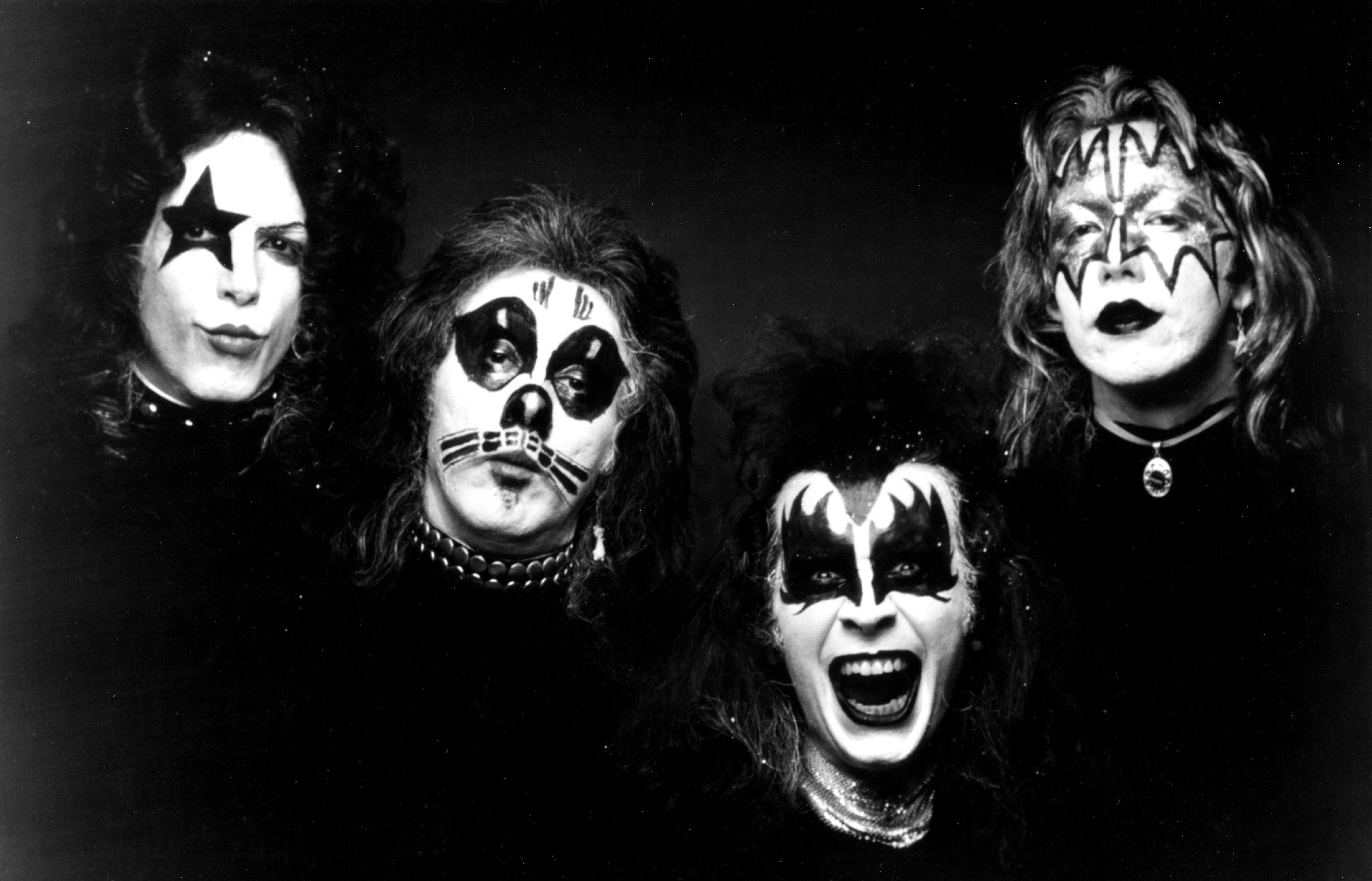 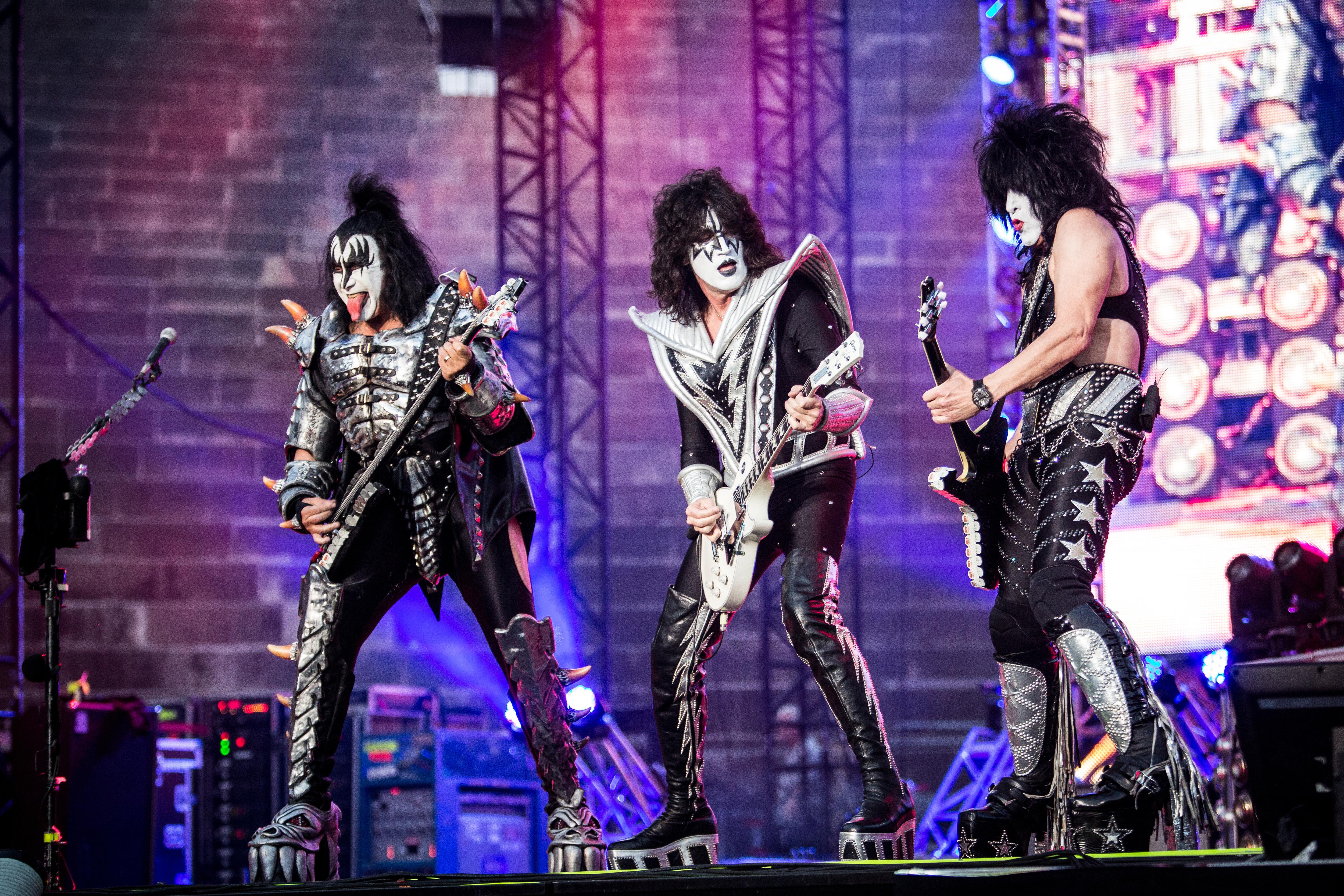 Proud Gene has boasted: “The business model of Kiss was decidedly different than almost any other band before us — underlying rights, ancillaries. I had to find out about trademarks and how to amortise our costs and maximise profits.”

It is all a far cry from the American band’s Seventies heyday, when tour promoters would hire prostitutes to meet the rockers in each town. Drummer Peter once recalled of the hookers: “They’d pick us up, drive us around, and we’d get serviced in any way we wanted.”

Although all four enjoyed the wild life, Peter and Ace were always the biggest party animals in the band.

In Ace’s memoirs No Regrets he recalled how the pair once painted onion dip and salad dressing on to three naked groupies while on tour.

He wrote: “Alcohol, cocaine, and Quaaludes filled the next hour or two as we savoured the fruits of these lovely ladies.”

We’re so much more than a rock band

And Ace admitted he been rescued from drowning by Gene twice when out of it on tour — once when going for a drunken swim and once when he slid into the bath while zonked on tranquillisers.

Ace said: “Turned out Gene was actually a certified lifeguard when he was younger. Who knew?”

During his short-lived return to Kiss, which lasted until 2002, Ace also used to take Viagra before going on stage so fans would see him aroused.

But if he does take part in the final Kiss tour, the OAP will not be going on any more benders.

Ace has been sober for 12 years and says: “Now I pretty much lay in bed all day, order room service and save my energy for the gig.”

Meanwhile, three-times-married Peter Criss, 72 — once described as “impossible and intolerable” by bandmate Paul — has also had his own wake-up call. He had first been fired by the band back in 1980 over his addictions — and got dumped again after joining the 1996 tour.

Peter had lost his fortune by the mid-Nineties, and one dark day decided to end it all, putting a gun in his mouth.

He later wrote: “I was sitting in a Hollywood dump in shambles. Car-jacked, everything gone.” 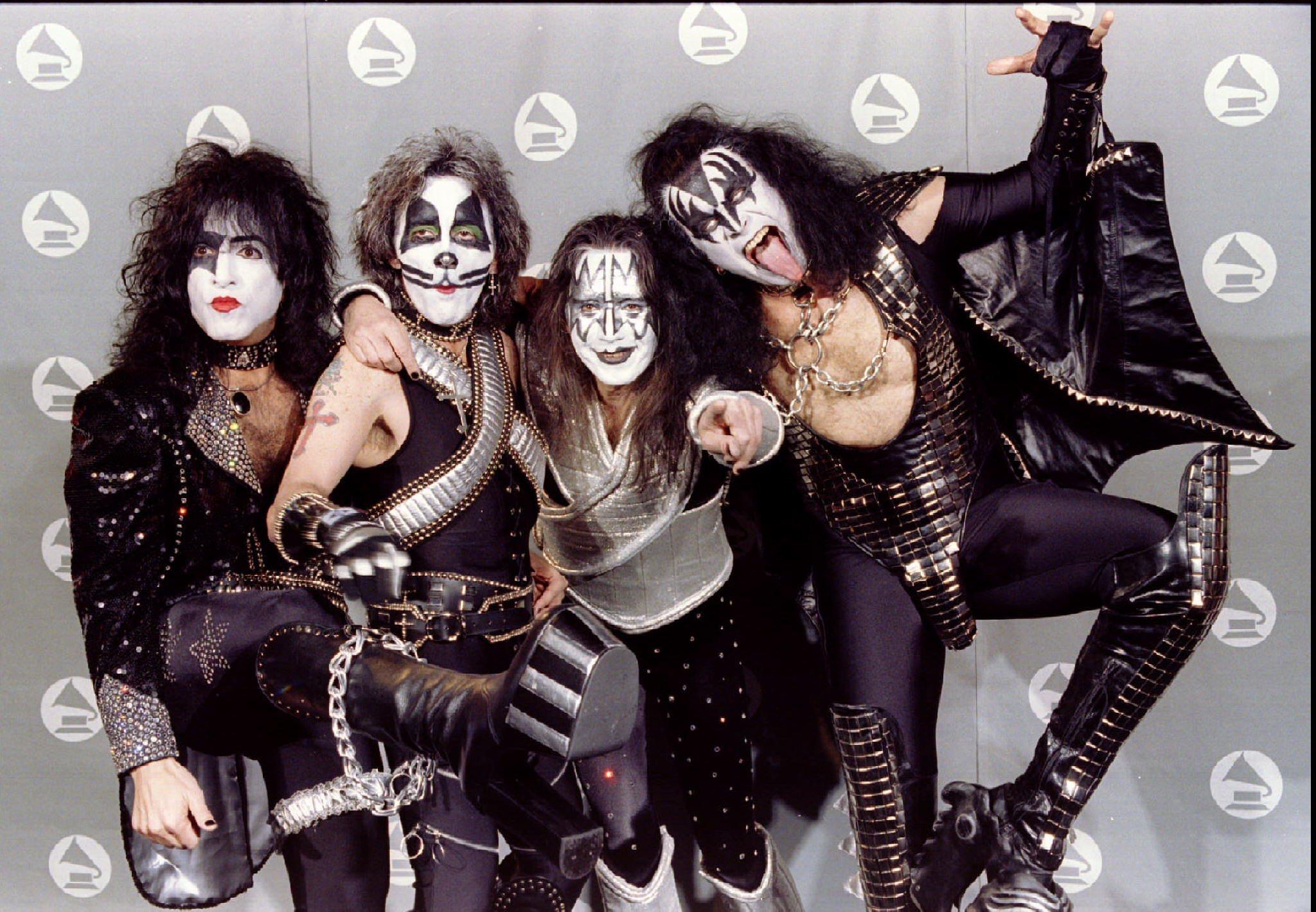 Looking back on his life he thought, “What do you really have to live for? Your two marriages have gone to s**t. You hardly see your daughter. You got a hundred grand, but you were worth 12-some-odd million at one point in your life.”

Only the thought of his young daughter and his ageing parents made him put the weapon away.

But he is still no match in the clean-living stakes for Eric Singer, the drummer who took over his old role in 1991.

Eric, 60, is a regular gym goer and the wildest thing he does is collect watches. 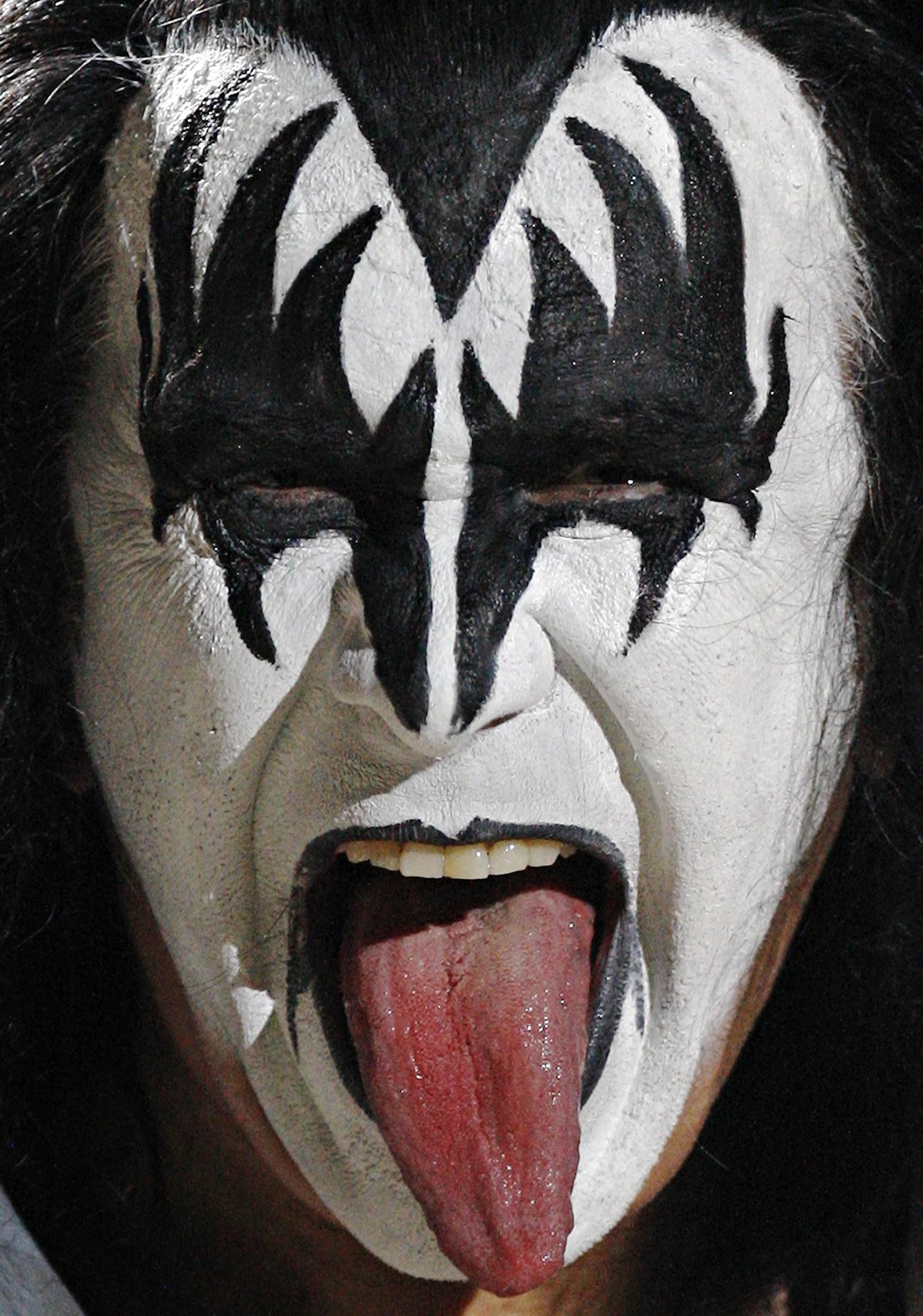 Meanwhile, guitarist Tommy Thayer, 58, who has stepped in for the unreliable Ace since 2002, writes kids’ books in his spare time.

While the tour line-up has not been revealed, Paul does admit the original foursome is still worth celebrating.

He explained: “We’re so much more than a rock band.

“I’d rather take the victory lap. We beat the odds. We kicked everybody’s ass. We outlived the naysayers.

“I want to go around and high five everybody around the world. And that’ll take a while.”