Holly Willoughby stumbled over her words and struggled to say the word ‘balls’ during today’s game of Spin To Win on This Morning.

If you don’t fancy a spin of the wheel, you could spin our balls,’ Phil explained, prompting Holly to run over to the tombola machine.

‘Not our balls, my boils,’ Holly declared, as she came charging back, but quickly noticed her blunder.

‘Boils?’ she repeated, before clarifying: ‘Balls, not boils. That’s grim.’

Holly then proceeded to give her lines another shot, but hilariously slipped up again. 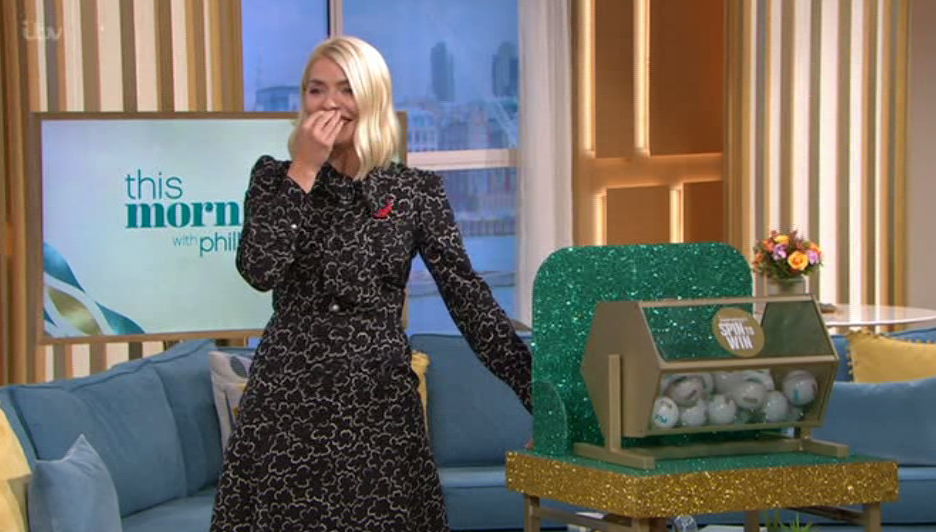 ‘There are 24 boils,’ Holly then said before letting out a screech as she realised her error.

‘What’s happened to you?’ Phil laughed.

‘I can’t say balls!’ Holly replied, with her hand over her mouth. Brilliant.

Luckily, the presenter eventually managed to get her mouth around the word ‘ball’ and went on to welcome contestant Jennifer, who correctly buzzed in with today’s catchphrase and took home a cool £1000.

Elsewhere on today’s programme, Sharon Marshall was praised for candidly speaking about her fertility struggles.

The soap expert shared that she hid her continued attempts to conceive from her friends and co-workers because she was embarrassed, but has implored others to be open.

‘I felt I wasn’t innately woman… which was a ridiculous way to think… because this is something you’re supposed to do naturally,’ she told viewers.

‘I felt almost stupid and I wasn’t telling people at work which was leading to problems, because you’re having to go off to scans and injections and I would suddenly not be available for meetings… That was one of my biggest mistakes.’