He is one of the most successful — and sexiest — actors in Hollywood. Harrison Ford got his start in the business by taking roles as an extra on movie sets, and supplemented his humble income by pursuing carpentry, per Far Out Magazine. But after a “serendipitous” audition with George Lucas thanks to his friend, casting director Fred Roos, Ford was able to play the space cowboy Han Solo in the “Star Wars” franchise. With that starring role, he went from a relatively unknown actor to a superstar on a global scale. He followed up his success in “Star Wars” with a starring turn as the titular Indiana Jones.

Ford’s movies have grossed billions worldwide, per IMDb, but while he has enjoyed some great success with his career, his private life has not always paralleled that. Keep scrolling to learn about Harrison Ford’s dating life and how many times he’s been married.

Harrison Ford has been married a handful of times 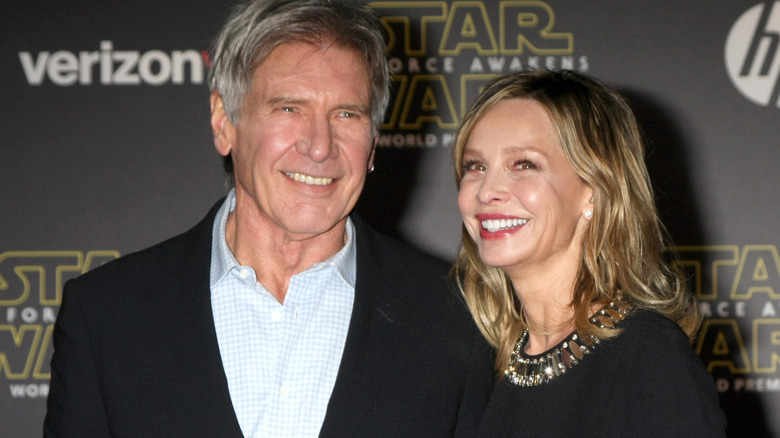 Harrison Ford’s first marriage was to Mary Marquardt, which lasted between 1964 and 1979, per Closer Weekly. They share two sons: Benjamin, who is a restaurateur, and Willard, who owns the Ludwig Clothing Company. Willard previously owned Strong Sports Gym in Los Angeles, but that closed in June 2020 due to the coronavirus pandemic, as noted on Instagram.

While he was still married to Marquardt, Ford had an affair with his “Star Wars” co-star, the legendary Carrie Fisher, according to her book, “The Princess Diarist.” As Fisher explained to The Guardian in 2016, she felt she gained a lifelong friendship with Ford, even with her continued feelings for him. “Yes, I love him. I’ll always feel something for him,” she said. “I love Mark [Hamill], too, but I love Mark more like a sibling. You can’t pretend something for so long without some of it coming true.”

Ford’s second marriage to Melissa Mathison lasted from 1983 until their divorce in 2004, per Closer Weekly. Their union produced two children: son Malcolm and daughter Georgia. They would both follow their father’s footsteps and become actors. Mathison, unfortunately, died in 2015 from cancer. Ford began dating Calista Flockhart (pictured above) in 2002, when he was still legally married to, but separated from, Mathison, per Hello! magazine. They married in 2010. Ford adopted Flockhart’s adopted son, Liam, in the marriage, and the couple has lived happily together ever since.