Kate Garraway, 53, and Ben Shephard, 45, were joined on Good Morning Britain by Priti Patel, 48, to discuss the latest developments arising from the coronavirus pandemic. With two vaccines in circulation in the UK to try and stop the spread of COVID-19 and protect members of the public, there has been some doubt about the speed of the process. Wanting to know how many doses were on hand to administer to people on a daily basis, the journalist consistently questioned the Home Secretary until she admitted she didn’t know how many vaccines were going to be on hand in the foreseeable future.

Asked how many were going to be available on Thursday, Ms Patel remarked: “The understanding is, with the Astrazeneca vaccine, there are over half a million doses of the vaccine that are going out right now.

“That’s to vaccination hubs, that’s both GP surgeries but also hospitals because obviously the vaccine landed in key site hospitals on Monday.”

“So that’s now, that’s absolutely now and will be going up and up because Astrazeneca is obviously accelerating the rate at which they’re producing the vaccine and getting that out,” the politician replied.

The presenter cut in again as she asked: “Okay so it’s still not clear, we’ve got half a million going out today. What’s going out tomorrow?” 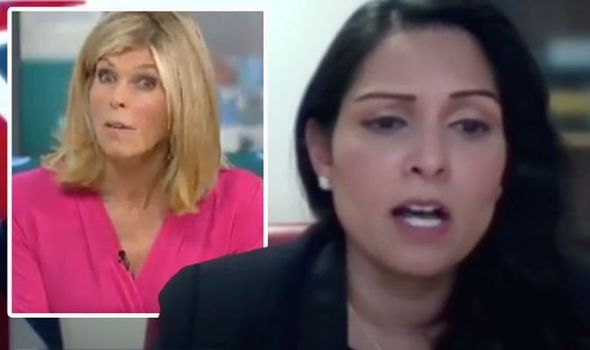 We will use your email address only for sending you newsletters. Please see our Privacy Notice for details of your data protection rights. Piers Morgan erupts at Zahawi on ‘ridiculous’ lack of border checks

“Or, is that half a million all we’ve got now?” she continued, to which the Home Secretary admitted defeat.

“I can’t tell you how many we’ve got going out tomorrow because obviously, we’re getting vaccines that are being certified constantly by the company that does the certification then do the distribution so I can’t tell you what’s coming up tomorrow and the day after,” Ms Patel explained.

“But I can tell you those numbers are going up and up and up because the vaccines are being produced and the fact is we have to 730 vaccination sites, that will be 1000 sites by the end of this week.”

Good Morning Britain viewers rushed to Twitter to comment on the interview with many angry Patel couldn’t give a definite answer.

I can’t tell you

“This refusal to answer questions really has to stop. But how I have no idea. I do not believe that the Home Secretary does not know how many doses of the vaccine we have in the supply chain. The reason why she isn’t saying concerns me,” one viewer commented.

Another added: “Why doesn’t she know the distribution channels given as she keeps saying its the biggest vaccination event in our history and also why doesn’t she know if the checking regime of vaccines has been reduced from 10 to four days given the huge ramifications on the program?”