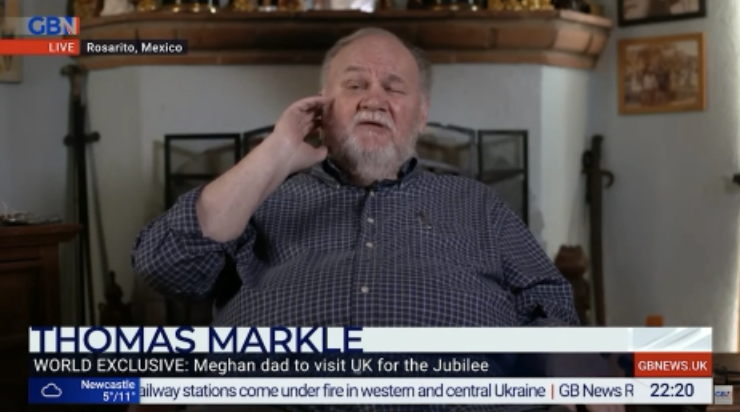 GB News has been slammed for teasing a world exclusive set to ‘rock the royals’ only for it to be Thomas Markle announcing he’s making a trip to the UK.

The Duchess of Sussex’s father joined the programme on Monday night where he revealed he is planning to fly to England in June for the Queen’s Platinum Jubilee and has hopes to meet members of the royal family and his grandchildren – Archie and Lilibet – for the first time.

He also weighed in on Prince Harry’s recent NBC interview, in which he said he wanted to make sure that the Queen is ‘protected and has the right people around her’.

The network had branded Thomas’s interview ‘unmissable’, but critics were a little underwhelmed by the big reveal.

‘That’s it? Hardly earth shaking is it?’ one slammed.

‘Why on earth do the media keep giving this man coverage?’ another person asked.

During his appearance on the programme, Mr Markle said it was ‘very rude’ of Prince Harry and Meghan not to have brought their children to see the Queen.

He also hit out at Prince Harry for awkwardly dodging a question about whether he misses Prince Charles and William.