“If we are lucky enough to get a second season, I think Flora would be brought in,” YA fantasy’s star tells TheWrap 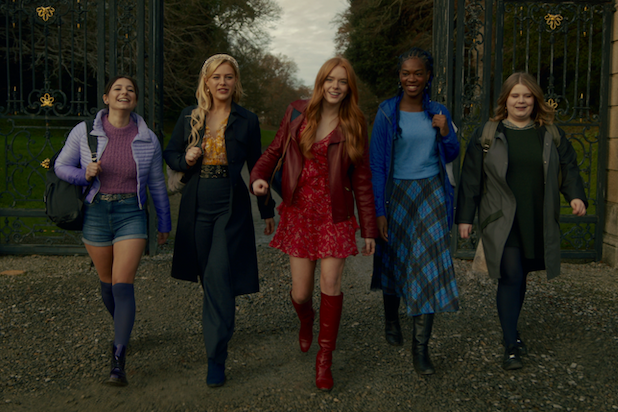 “Fate: The Winx Saga,” Netflix’s live-action adaptation of the Italian cartoon series “Winx Club,” which aired on Nickelodeon in the U.S., launches Friday. But as you may have already guessed from its trailer, this is not the “Winx” from your childhood.

“I always like the saying, ‘The Winx’ audience grew up, and so did we,” Abigail Cowen, who leads the cast of “Fate: The Winx Saga” as fire fairy Bloom, told TheWrap. “So it’s definitely a reimagining of the Italian cartoon. And we want to surprise and delight those who are familiar with the existing show, while also carefully distinguishing ourselves as the live-action ‘Fate.’”

The “Chilling Adventures of Sabrina” alum added, “It is definitely more of a grown-up version.”

Created by Brian Young (“The Vampire Diaries”), “Fate: The Winx Saga” is a six-episode series that follows five fairies attending Alfea, a magical boarding school in the Otherworld where they must learn to master their powers while navigating love, rivalries and the monsters that threaten their very existence.

If that reminds you of a very beloved franchise about a boy who lived — well, yeah, that comparison is not at all lost on Cowen, or the show itself.

“There’s a reference to ‘Harry Potter’ in the first episode and I think that’s funny and ironic,” Cowen said.

The similarities run even deeper for Cowen’s character, Bloom, who spent her entire life up until now believing she was a human, only to find out she’s not just a fairy, but a pretty powerful one. Sound like any teen wizards you know?

“It’s a very hard thing for Bloom when she goes to a place where she is supposed to fit in and even there, she finds out that she doesn’t and that there is something still different,” Cowen said. “And it is traumatic, it is a really hard thing to deal with. Just like in anyone’s life, when you find out something about yourself that you didn’t know, the journey of self-discovery in and of itself is difficult.”

Bloom, Stella, Aisha and Musa are all characters from the “Winx Club” cartoon series, while Terra and Beatrix are newly created for “Fate: The Winx Saga.” When the casting for the Netflix show was first revealed, some fans of the animated series criticized the choices for Terra and Musa on social media, calling the casting “whitewashing” because Terra (who is reminiscent of the “Winx Club’s” Latina earth fairy, Flora) and Musa (who is an Asian fairy in the cartoon) are played by white actresses.

While Cowen said she cannot “speak to the casting process” as the star of the series and was not involved in that aspect of “Fate: The Winx Saga,” she thinks “it’s important that we are having these conversations.” She also told us that, should the show get renewed for Season 2, she believes Flora would be introduced.

“I can say Elisha is brilliant as Musa. I can’t wait for fans to see her performance,” she said. “And Flora is actually not in our series. I know that there is some confusion about that — in the first season, she’s not. Eliot’s character is actually Terra, who was created specifically for the show. I can’t wait for fans to fall in love with her too. She’s so fun, she’s so sweet. I mean, she’s such a lovely character. And I think the misconception is that Eliot’s character is Flora. But Terra is brand new, she’s reimagined.”

Cowen continued: “If we are lucky enough to get a second season, I think Flora would be brought in and I would definitely welcome that. I’m not a part of the casting process, but I do think, if the series does go to a second season, I think hopefully these concerns are something that can be addressed, because I do think diversity both in front of and behind the camera is vital and much-needed throughout the industry and internationally. So I think it’s important that we are having these conversations.”

An individual with knowledge tells TheWrap that should there be a Season 2, the hope is in fact to bring Flora into “Fate: The Winx Saga.”