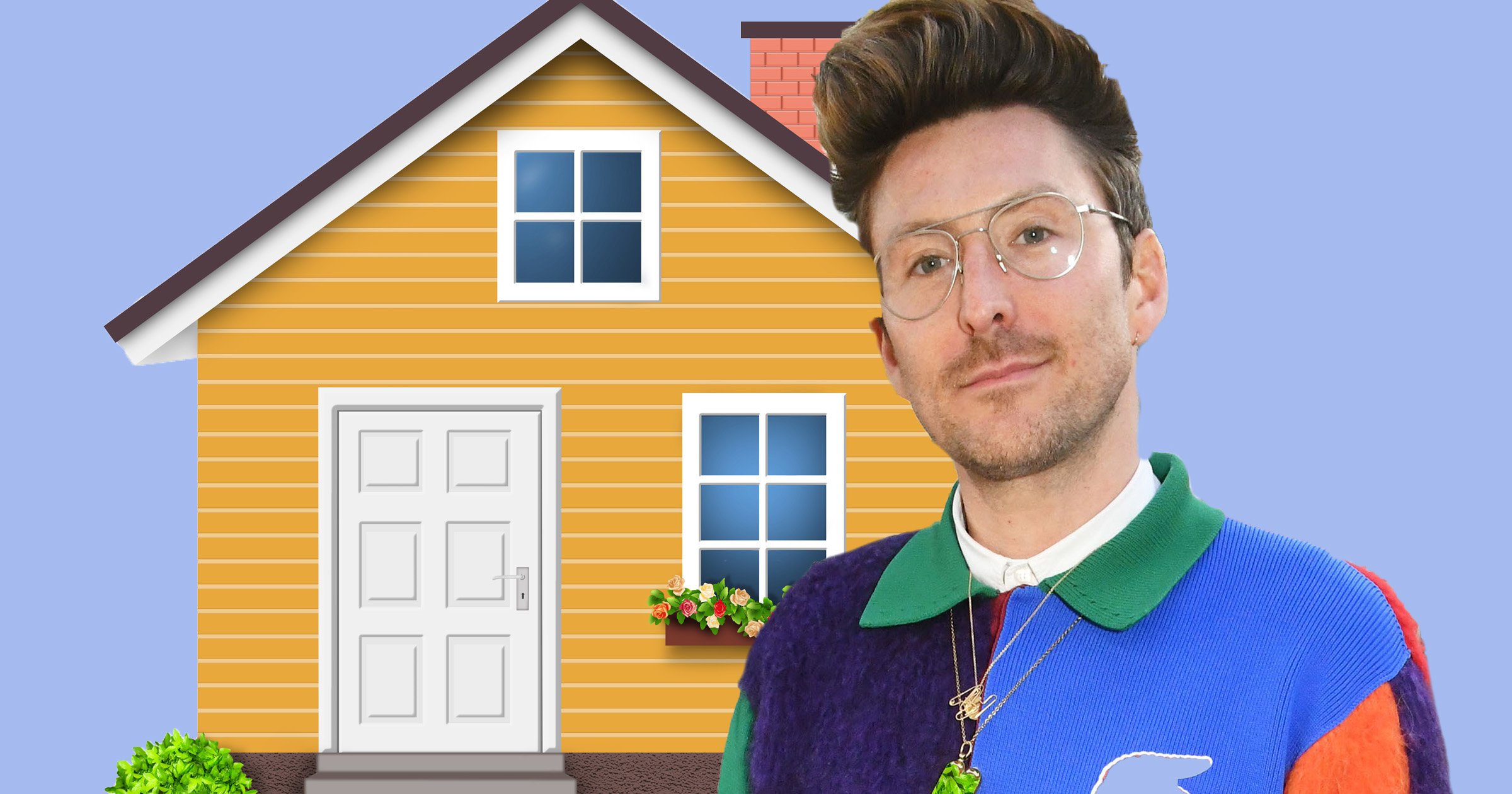 Henry Holland is a fashion and interior designer who worked as a writer for Sneak, Bliss and Smash Hits magazines, after graduating from the London College of Communication with a BA in journalism.

In 2006, he began designing a range of 1980s-inspired T-shirts with catchy phrases such as ‘I’ll tell you who’s boss, Kate Moss’. They were an instant global success, selling in the likes of Dover Street Market in London and Barneys in NYC.

The brand grew to critical acclaim on both sides of the Atlantic with celebrity fans including Alexa Chung, Rita Ora, Rihanna and Kendall Jenner.

Henry, who lives in Hackney, east London, with his husband, David, recently created an exclusive collection of contemporary textiles, soft furnishings, decorative accessories and statement furniture for digital department store Freemans. The collection is about to launch.

Tell us about the first home you purchased…

We knew the home was the one for us when our one-year-old French bulldog, Peggy, walked around the house like she owned the place. So, she chose it – sort of!

It was a small two-bedroom Victorian terraced house, near Victoria Park in Hackney, east London, which we bought in October 2014.

It had a typical front garden and quite a long and narrow back garden, which ran along the side of the kitchen. The garden backed on to a primary school, which was good for security, but when we moved in we realised it was not good for peace and quiet as the primary school kids always seemed to be in the playground!

Why was buying a home important to you?

We’re both designers and design focused, and we wanted to put our handprint and touches to our home and so after a few years of renting different places with white walls and wooden floors we got frustrated with not being able to do much more interior design than hanging a few pictures on the walls and adding soft furnishings.

We got to the stage where we wanted to work on designing a space that works for us.

How did it feel to be a home owner?

It felt very grown up and like I was progressing in life after many years of hard work. It was hard to host get-togethers in the house, though, because it was very small and because of the layout, which wasn’t open-plan.

But we lived right next door to a really great pub and quite near to Victoria Park and so we definitely hosted a lot of people in the area.

What work did you do on the home?

We did quite a lot structurally. The bathroom was on the ground floor behind the kitchen, which we didn’t quite fancy and so we moved it upstairs, which meant we lost our third bedroom.

We also moved a few walls, raised a few ceilings, installed a new kitchen, which we extended to replace the bathroom, plastered and rewired the whole house, and then decorated it.

How long did you live in the home?

We lived there for seven years and sold it rather than rented it out. We decided to move because we wanted a bit more space. But we got attached to the home, and so it was quite sad on our last day in it, to take the last boxes out and see it empty.

Where did you move next?

Just around the corner from our first home. We loved the area, which is why we stayed so long, in the house.

We were looking to move for about two and a half years, but because we wanted to move three streets one way or three streets the other way, there wasn’t a huge amount to choose from and so we had to wait until the right property came along.

Tell us about your new home…

The new house has got five bedrooms, which is exciting, and it’s a double-fronted Victorian red brick property with a really nice south-facing garden. Living here feels like I’ve reached another sort of milestone in terms of feeling more grown up.

This is our ‘until old and ready to downsize’ home. It’s in perfectly good condition to live in and so it will be quite a while before we actually do work on it.

Why are you so attracted to Hackney?

Hackney has a nice vibe, a really nice community village feel to it and feels homely. It has a gorgeous park, which is perfect for our dog, Peggy, who’s now eight, and east London is where most of our friends live.

Plus, there are so many amazing restaurants and a nice selection of independent shops that we don’t really venture much further than east London.

David and I both grew up in very small villages up north, so maybe that has something to do with our attraction to Hackney — we like a community feel to an area.