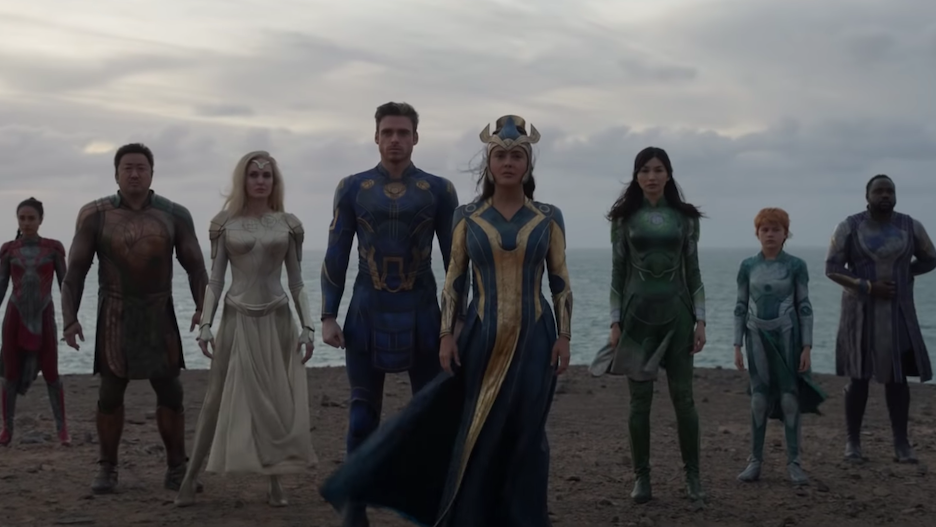 Created by comics legend Jack Kirby in 1976, the Eternals are ancient humans who, a million years ago, were genetically manipulated by cosmic beings known as the Celestials. (A common Marvel Comics theme.) They have fantastic powers and are extremely long-lived, so of course they influenced the course of human history and inspired (or just literally were) characters from myths and legends. Things are slightly different in the film, where we learn they only came to earth around 5,000 B.C.E. But read on and relax as TheWrap clears it all up.

Sersi (Gemma Chan) Able to manipulate matter at the atomic level, in the comics she can also fly, teleport and do other super things. And fun fact: In the Marvel Comics universe, she was known to the ancient Greeks as Circe, the witch who became Odysseus’ lover for a time in Homer’s “The Odyssey.”

Ajak (Salma Hayek) leads the Eternals in the film and has healing powers and can communicate with the Celestials. In the comics Ajak has the usual superpowers and is also a man who was known to the ancient Greeks as the Trojan war hero Ajax the greater. He later appeared in ancient Mesoamerica as the god Quetzalcoatl, something we think will still be the case given that in the movie Ajak is played by one of Mexico’s most famous actresses.

Thena (Angelina Jolie), a fierce warrior, can form weaponry out of thin air (and yes she also has the usual other super powers). But don’t let the name trick you: In the Marvel Comics universe, the Greek gods actually exist, so Thena is NOT the same as Athena. She did however do a lot of the things Athena was credited with.

Ikaris (Richard Madden), considered the tactical leader of the Eternals, possesses enhanced strength, flight, and can project powerful cosmic beams from his eyes. In the comics he also shows up in a ton of myths, including as the dove on Noah’s ark, and the Icarus of Greek myth was actually his son.

Kingo (Kumail Nanjiani) blends in as a Bollywood movie star, and can project and manipulate cosmic energy from his hands. His comics counterpart is Japanese, however.

Sprite (Lia McHugh), perpetually a child, has the power to create illusions that can confuse her opponents. In the comics Sprite is the inspiration for dozens of trickster spirits of folklore and even inspired the creation of “Peter Pan.”

Phastos (Brian Tyree Henry), the first gay superhero of the MCU, Phastos is a skilled inventor who creates weapons and hopes to advance human technology. Similar to Thena, in the comics he is similar to, but expressly not the same, as the Greek god Hephaestus.

Druig (Barry Keoghan), the aloof member of The Eternals, Druig has the power to control other peoples thoughts and manipulate reality. His comics counterpart is somewhat villainous, having worked at one point as a KGB thug.

Gilgamesh (Don Lee), gifted with superhuman strength, can form a cosmic exoskeleton during battle. In the comics he’s more properly known as The Forgotten One, an immortal strongman who has been mistaken for many legendary strongman over the millennia, including, yes, the Sumerian king.

Makkari (Lauren Ridloff), the speedster of the bunch and the fastest Eternal, Makkari is also deaf and the fastest woman in the MCU. A man in the comics, Makkari was previously known as the Egyptian god Thoth, and as Mercury, among many other names.