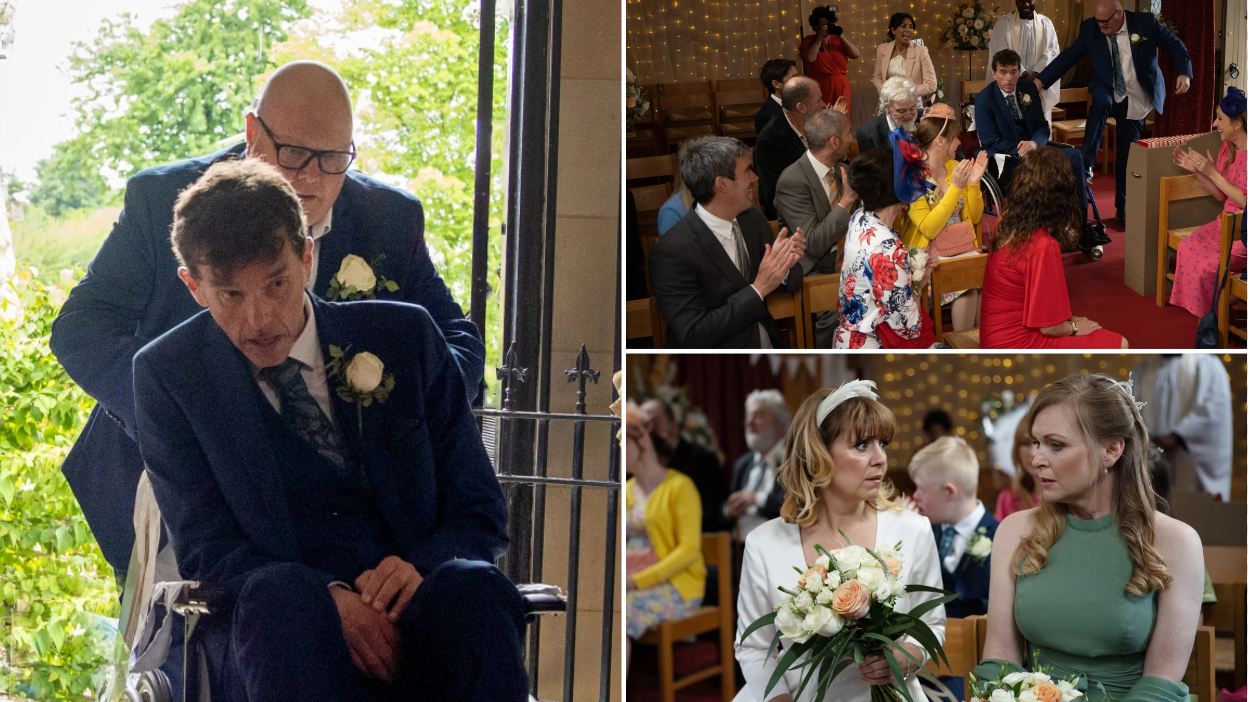 Next week’s special Emmerdale wedding episode, with Rhona Goskirk (Zoe Henry) and Marlon Dingle (Mark Charnock) finally tying the knot, is set to be one of the most emotional that we’ve ever seen on the soap. With the couple already having been through so much together, including Marlon’s massive stroke and slow, difficult recovery, their path to the altar has been more complicated than most.

As well as the wedding itself, the wedding episode brings together a lot of the current storylines, contrasting the happiness of the wedding celebration with the sadness of Faith (Sally Dexter) knowing that she’s dying. There are also further twists in Chas (Lucy Pargeter) and Al (Michael Wildman)’s secret affair and some huge scenes for Priya (Fiona Wade).

Mark Charnock has been telling us that it was important to tell these stories in a way that combined the uplifting, happy moments with some moments of tragedy.

‘That’s what soap ought to be about,’ he says. ‘You’ve got the tragic Faith episode, but Sally Dexter’s so brilliant at bringing lightness to that. The affair with Chas and Al, it’s kind of heartbreaking, and then you come back in and there’s Sam (James Hooton) being funny. It’s a brilliant script and it’s brilliantly directed. It’s got everything that a soap menu requires.

‘It’s romantic, it’s tearful, it’s all the stuff you want in 42 minutes. I’m very proud to be part of that.’

He also revealed that the actors didn’t have to try too hard to find an emotional connection to the scenes. ‘It was quite an intense atmosphere. Caroline [Mitchell] had written this intense script and there were intense stories going on all over, so many stories going on in the second ep. So when I read it I found it relentlessly moving all the way through. The Faith stuff’s incredible, and amongst other things, Priya’s story.’

Marlon and Priya had made a pact that he would walk down the aisle at his wedding and she would take her jacket off and reveal her burn scars – two damaged people being proud of how far they’d come.

‘I think it’s a very smart piece of threading stories together,’ Mark says. ‘I think it’s really clever. She’s been on an awfully long journey with that, so for them to put that into this episode to make the reflection bounce off everything else that’s going on is clever. I had some scenes with Fiona where they first make the pact that he’s going to walk and she’s going to take her jacket off and show her back and scars and it was very moving to film. You could see how much it meant to Fiona when we were doing it and she was pouring with tears in rehearsals as well as the take. So I think that’s a clever piece of storytelling.

‘Again it’s one of the things that this format of drama, soap, it’s one of the only forms of drama that can do stuff like that and refer back so far and tie it into now, because we’ve got room to do it.’