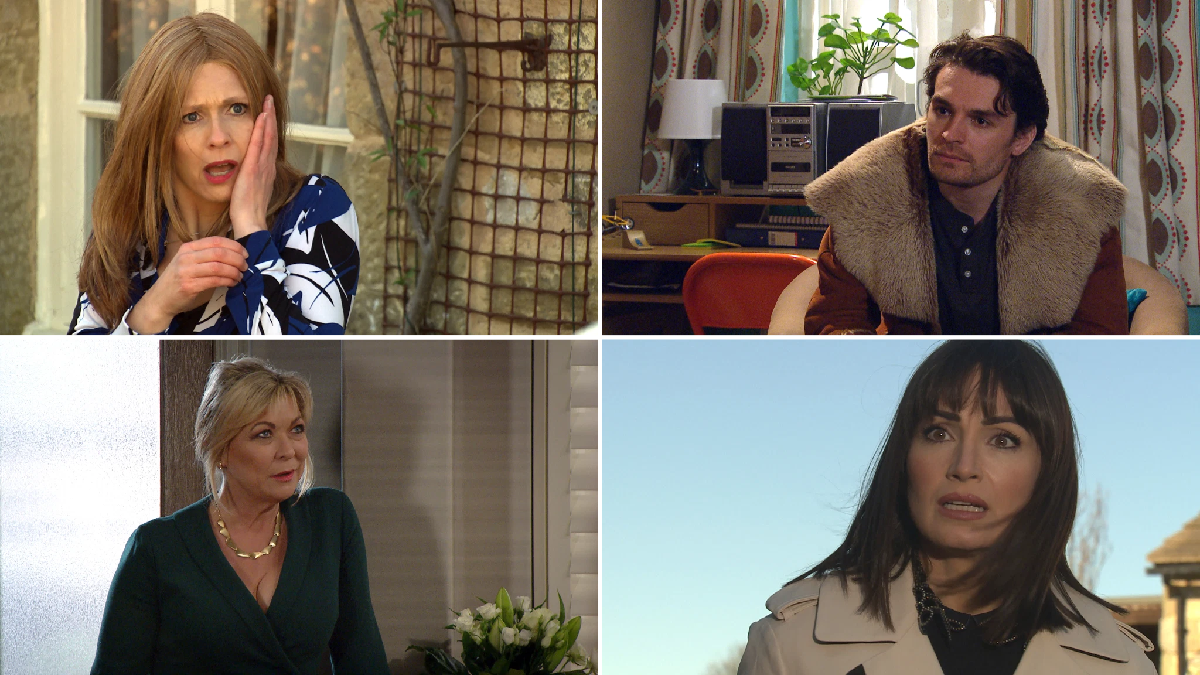 Kim Tate (Claire King) is on a mission in Emmerdale – to unmask the identity of her poisoner and have her revenge – will she discover the truth as she sets up a dinner party with a difference.

Kim hosts a gathering at Home Farm. Once the guests are assembled, Kim declares that she’s stepping back from the business, but first she needs to anoint her successor.

Kim revels in the reaction this creates and soon the bickering among her guests commences. Kim addresses her guests one more time with a speech designed to manipulate her poisoner into taking action.

Leanna drops hints to Billy about the lack of attention she has been receiving from Jacob recently.

Leyla and Liam’s wedding preparations are picking up. At The Woolpack, Bernice catches up with Liam, but Leyla’s arrival interrupts them.

Liam seeks out Bernice to establish some ground rules for co-existing in the village.

Ryan catches Mack red-handed with Val’s coat – a treasured keepsake of Eric’s. He urges Mack to do the right thing and even threatens to tell Cain what Mack has been up to.

Jamie is unnerved by Kim and Will’s closeness.

Cocky Mack turns up at Eric’s Barn and offers Pollard a quid pro quo – the return of Val’s coat in exchange for Aaron’s freedom. Eric is dumbstruck at his audacity.

The stand-off between Eric and Mack escalates until Eric has an angina attack. As he slumps to the ground, Mack has a decision to make: does he help him or not?

Ethan comes to an unsettling realisation regarding what Luke is up to.

Eric is in hospital. Faith dashes to his bedside, but her visit doesn’t quite go as she hopes for.

When Brenda arrives at the hospital, Faith meets her in the corridor and tells her that ‘Brenda’ was the first word Eric spoke when he came round.

Ethan tells a worried Wendy what Luke has been up to.

Jimmy and Nicola are excited to be having Carl back, but it will take a lot more to heal the rift between them.

Wendy pleads with Luke to be honest. Luke finally tells Wendy the truth but how will she react.

Mack soon thinks he has got a way of solving his problem with Eric while Dawn and Jamie are unaware of Kim’s hidden camera.