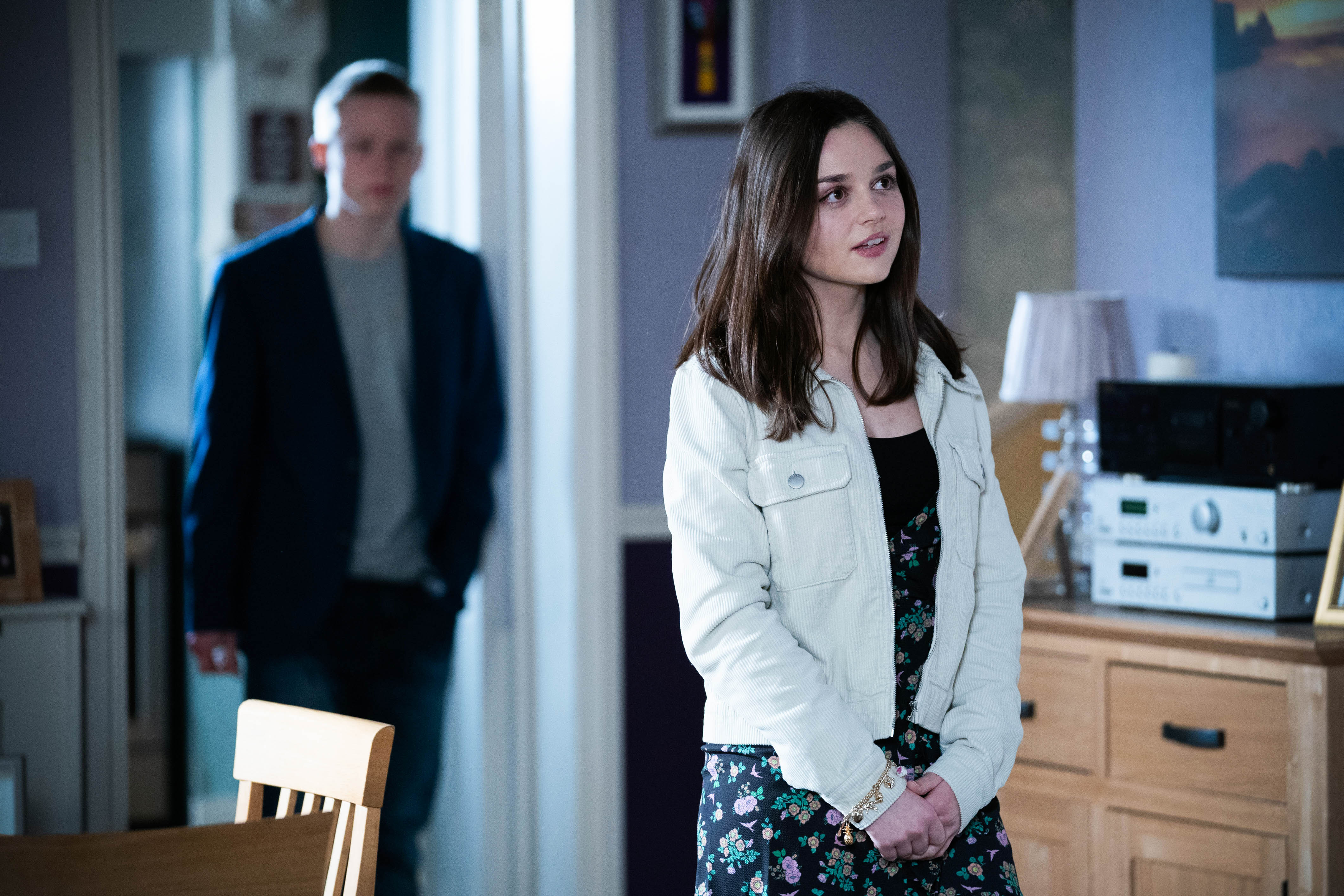 Given that Bobby Beale (Clay Milner Russell) once murdered his sister with a music box and left Jane Beale in a wheelchair in a savage attack with a hockey stick, you can’t really blame his new girlfriend Dana Monroe for being a little bit wary.

But here, actress Barbara Smith reveals that her love for Bobby runs deep and reckons they could have a long lasting relationship.

Well, that’s if dad Harvey (Ross Boatman) will allow it, that is…

How are you finding your time on the show so far?

I’m really enjoying it, it’s flown by! I love Dana, she’s such an interesting character – and it’s nice to play someone so kind. Clay (Bobby Beale) has been so welcoming, and I really love working with him. We’re working with various covid restrictions at the moment, meaning unless we’ve formed a close contact cohort, Clay and I can’t touch or be close to each other so it’s a fun challenge finding ways to express Dana’s infatuation with Bobby, and to tell the story of them falling in love, without physical touch.

What was it like when you got the part?

It was really crazy! I couldn’t believe it at first, I remember my agent asking me how I thought the zoom audition went, I wasn’t sure and wondered what I could have done differently but he said don’t worry – you’ve got the part! I was in shock but it was a moment I’ll remember for a long time!

Were you a fan of the show before?

I absolutely loved it, as a child I was obsessed and would never miss an episode. My favourite storyline was Stacey and Max’s affair and Bradley falling off the roof – I loved the characters so much. Meeting some of them in real life was so surreal for me, it’s a staple in my house, it was weird if EastEnders wasn’t on!

What was your first day on set like – did anything about the Square surprise you?

I was surprised at how big it was! it really helped me feel like I was part of the world, it surprised me how real it all felt when I did my first scenes in the Walford East, I expected it to feel like more of a set than it did.

Tell us a bit about Dana – what do you like about her? Any similarities?

The thing I like most about Dana is that she’s so generous and she will do anything for the people she loves and cares about. I’m a bit more selfish than Dana but I think we’re similar in how much she’s a film geek – we have that in common. Dana and Bobby are really into anime and I’m not so into it, but I’ve discovered it through the characters. We’re similar in the way that Dana geeks out over films and books, we both like to escape into different worlds.

She joined the show with links to Bobby but we’ve since been introduced to her Dad Harvey too – what’s it like working with Ross?

I love it! He’s so experienced so being able to work with someone that’s done as much as Ross is great. I really feel like I’m learning a lot from him. He’s really present and in the moment and always happy to run with my ideas so it’s nice to build that father daughter relationship with him. I feel like we’re building on it in real life at the same time, so it’s really nice.

This week, Harvey and Dana officially move into the Square – what’s it like to have a place to live on Albert Square?

It’s unbelievable! That was the most surreal thing – getting to see our flat in Albert Square was so exciting. Outside, it’s opposite the Beale’s house so to be near such an iconic house is great. When I saw the interior set and there’s pictures of Ross and I all over, it really helps me play the character better as well because you feel immersed in their world.

Dana’s not been honest about Bobby’s past – is she hesitant about her dad finding out the truth?

She is panicking so much, it’s causing her a lot of anxiety. Dana and her dad are very close, I don’t think she’s ever really lied to him before. She’s not a typical teenager that goes out to parties or sneaks out. She’s never had a boyfriend before, it’s all very new to her so she’s worried about Harvey finding out. He can be a strict dad so her fear is that he might forbid the relationship. Dana will do all she can to keep seeing Bobby but she knows her dad has the last word ultimately.

Dana was able to forgive Bobby after all the lies he told her, do you empathise with her decision or would you have reacted the complete opposite?

I’m not sure I’d have forgiven Bobby quite so easily but Dana really really likes him so she’s got her rose tinted glasses on and is giving him some special treatment. My big worry would be that if he’s capable of such violence once, then he’s capable of it again. But Dana doesn’t have that worry – I think that speaks to the huge amount of trust she has in him.

What’s it like working with the Beale family – Clay, Gillian, Dayle etc?

It’s great, Gillian is such a natural and so funny – she really makes me feel at ease on set. It’s a pleasure to watch her work with Clay and Dayle – and to witness their fascinating family dynamic first hand.

Anything you can tease coming up for Dana?

There’s going to be some trouble ahead with Harvey accepting Bobby, he’s understandably going to have an underlying problem with the two of them and wants to protect his daughter so it’s bound to cause issues for Dana and Bobby. I hope they work things out because I love them as a couple together!