Semifinals Night of Dancing With the Stars has come to an end, and sadly, two more couples have gone home.

Monday’s show ended with a brutal double elimination that sent Johnny Weir and Britt Stewart and Skai Jackson and Alan Bersten home packing. Johnny and Britt were eliminated first — for having the lowest scores and lowest fan votes — while Skai and Alan were sent home by the judges over the other bottom couple, Justina Machado and Sasha Farber.

Both Skai and Johnny expressed their gratitude for the show and their pro partners while speaking to ET just moments after learning of their fate.

“The best thing that has come out of Dancing With the Stars is Britt,” Johnny told ET’s Lauren Zima through tears. “We are bound now for life, and I will support her until I can no longer text.”

The professional Olympic skater was visibly emotional following his elimination, admitting, “I feel horrific. I gave everything that I had for this competition and I have no regrets at all about the performances that we gave. At the end of the day, it does come down to your scores from the judges as well as how the public sees you and if they choose to vote for you. Honestly, I would 100 times choose to be myself over being popular, and I think that that is a strong message that we have shown this whole competition.”

Johnny added that he had been “crying for hours” after receiving lower scores during the couple’s salsa as he knew that meant his time on the show was coming to an end.

“I knew I was done as soon as we finished the salsa,” he admitted. “I’m an athlete and very human and when you know you’ve lost, it’s a hard pill to swallow.”

Britt shared with ET just how proud she was to be a part of a team that represented diversity and showcased positive representation.

“I could not have asked for someone better for my first season, but honestly, just in general. Johnny has brought so much amazing light to my life for these last couple months and I’m so proud of our journey,” she shared. “I think we represent a minority that people can see. We represent a representation, and we really broke boundaries in this competition. And sometimes when you break boundaries and you push the limits, sometimes it’s a little bit of a rough change sometimes and not everybody wants to see it. I completely agree that I would much rather be my authentic self with you than be popular.”

Skai and Alan also opened up to ET about not making it to the finals.

“We literally did the best we could. Obviously it’s a really sad thing, but I’m not really sad sad about it,” Skai said. “I’m just happy that I was able to be on this journey with such an amazing person. I feel like we made it so far, we made it to week 10, we got through all the dances except for the finale and it’s just been really awesome. It’s sad, of course, but I’m actually happy at the same time.”

Alan chimed in, telling ET that it’s been “an incredible journey” with Skai and he’s just “so proud of her.” 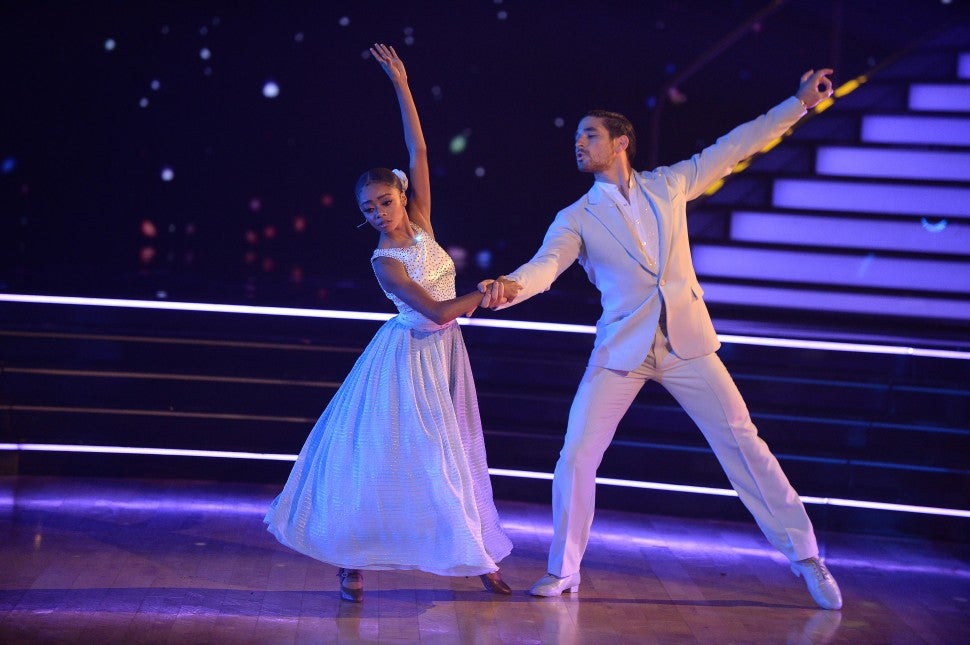 “I feel like when you make it to the semifinals there’s a proud moment, regardless,” he said. “Do I look back and wish we did anything differently? No. Not at all,” he said. “I feel like it was so inspiring to see Skai grow every week. She absolutely killed it tonight and it’s just the way it goes sometimes.”

“Honestly, it was a great season, and it was very much one of the toughest competitions,” he added. “This season was so competitive, and so to make it this far is just such a blessing. I am very, very happy. Rehearsals were fun, dancing was fun. I am very thankful and grateful.”

With two more couples eliminated, only four dance duos remain in the competition. Vying for the season 29 mirrorball trophy are: Nelly and Daniella Karagach, Nev Schulman and Jenna Johnson, Kaitlyn Bristowe and Artem Chigvintsev, and Justina Machado and Sasha Farber.

In addition to all of the dances we’ll see from each celebrity and their pro partner, next week’s Finals — airing Monday at 8 p.m. ET/PT on ABC — will also include another sure-to-be epic performance from judge Derek Hough, along with Nelly taking the stage separately to sing some of his greatest hits.

In the meantime, tune into Entertainment Tonight on Tuesday to hear more from the season 29 contestants. Check your local listings here.