For 50 years, the nonprofit documentary production company DCTV has been at the forefront of producing socially conscious nonfiction cinema on a grassroots scale. That goal extended last week to the realization of a longstanding goal with the opening of the Firehouse Cinema, a single-screen theater exclusively dedicated to showing documentary films located at DCTV’s Lower Manhattan headquarters, in the same old firehouse that co-founders Jon Alpert and Keiko Tsuno have owned and lived in for decades.

Alpert has leaned into the building’s history, outfitting the concession stand with the front of an old fire truck, working with firefighters to make movies for an upcoming firefighter film festival, and even populating descriptions of his goals during an interview with firehouse puns.

“We wanted a place where documentaries weren’t tagging along in the caboose,” he told IndieWire. “They were in the engine car.” Later, he added: “We are six rungs above the ladder of any place that we’ve been before.”

Beyond the kitsch, though, stands an opportunity to facilitate real change. The theater presents a promising new rental space for documentary Oscar contenders in need of qualifying runs and tastemaker events, which the owners hope will supply a sufficient revenue stream to cover operating costs as well as the underlying goal: to inject a range of diverse voices into the documentary field, while cultivating an audience for that work.

“We were trying to figure out how to go direct-to-consumer ever since we started,” Alpert said as he settled into the 68-seat theater and gazed at the empty screen a few days before the opening. “The initial DCTV screening room was an old postal service truck that we got for five bucks.”

Alpert has recited that lore many times over the years, and for good reason: In those early days, Alpert — who was nominated for short film documentary Oscars in 2009 and 2012 — and Tsuno would set up screenings of educational videos around Chinatown and the Lower East Side. By engaging the immigrant community through film, they helped locals recognize the value of documenting their own lives for both archival and representational purposes.

In the process, they anticipated conversations about the need for broader representation and marginalized voices in the film community decades before “diversity” became an industry buzzword. “It was a good, bubbling melting pot in those days,” Alpert said. “I think that it was fairly diverse in the beginning. There was a collective representing any possible grouping of people.” He ticked off some of collectives that emerged out of the DCTV ecosystem during its early chapters. “There was the Black Documentary, Third World Newsreel, Asians and Latinos making documentary films,” Alpert said. “Documentarians need to be more self-reflective about whose stories they’re telling.”

Now that mentality has extended to the new theater’s curatorial agenda as it aims to address a growing concern in the documentary community. “I’ll say it,” Alpert said. “Too many Ken Burns movies. Not enough others.”

Burns’ prolific work for PBS faced a public reckoning last year when an open letter signed by over 130 BIPOC filmmakers took the network to task for commissioning projects from the same figure over the years in lieu of bringing new voices into the fold. “How many other ‘independent’ filmmakers have a decades long exclusive relationship with a publicly funded entity?,” the letter asked. “Public television supporting this level of uninvestigated privilege is troubling not just for us as filmmakers but as tax-paying Americans.”

Alpert wasn’t surprised by the outcry. “Sometimes, the more things change, the more they stay the same,” he said. “There is a very thin top layer of recognized documentarians who get their projects funded, get the resources that they need, and might, if they’re lucky, get into a theater. There is a very, very exciting proliferation of people who make documentaries who want to see documentaries, and there’s been nothing done to service that, especially in a theatrical sense.” 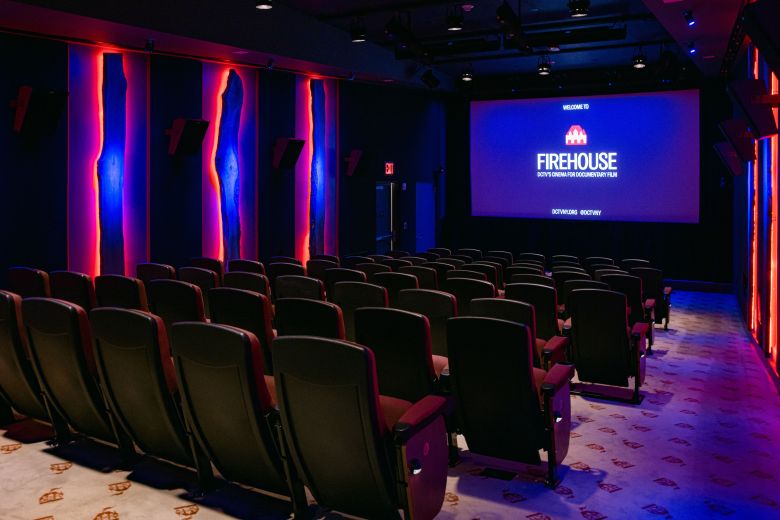 The Firehouse Cinema staff is angling to address that rift, said director of programming and engagement Dara Messinger, who has worked at DCTV for nearly 20 years. “I want fewer white heterosexual directors,” she said. “We want the slate to be way more diverse. I want to empower other people to share their stories and just share perspectives. I think sometimes a documentary community pets themselves in the back that they’re doing everything and they’re so aware and they’re so great. We can be a whole lot better and we need to be accountable to each other.”

The first movie opening at the Firehouse Cinema doesn’t quite underline that goal, as “The American Dream and Other Fairy Tales” was co-directed by a wealthy white woman, Abigail Disney. However, Disney’s first-person essay film takes aim at her own family’s wealth and casts it in a critical light. The next documentary opening at the theater, “I Didn’t See You There,” revolves around filmmaker Reid Davenport’s experiences with cerebral palsy as he looks back on the problematic history of disabled people in popular culture. The movie won the prize for Best Director at Sundance this year but had yet to find a theatrical distributor until the Firehouse programmed it, effectively giving it an awards-qualifying run. “There are so many amazing films out there that don’t have that,” Messinger said. “It’s kind of ridiculous.”

Other programs on the schedule include an evening event with Oscar-nominated filmmaker Stanley Nelson and a special screening of painter Titus Kaphar’s “Shut Up and Paint,” which looks at the way his work confronts the unspoken racial biases of the art world. An upcoming grant will allow documentarians to do finishing work on their films in the theater during off-hours. “We’ve never done anything on this particular scale before,” Alpert said. “But nobody besides us has the 50 years of documentary experience that we have and the commitment to the documentary community.”

As if to illustrate the collaborative aspect of the project, Alpert pointed out the halved tree trunks that line the walls of the theater were donated by cinematographer Hart Perry from his privately-owned forest upstate. At the opening party later in the week, he handed out awards to multiple people who had known him and his wife for at least 50 years, including a retired finance executive from Aetna who sits on the company’s board. “We believe in collaboration, not separation,” Alpert said. “And collaboration can happen physically in a place like this.”

Messinger said that the theater rentals have been dominated by bigger documentary distributors like Netflix and HBO, for better or worse. “This is the fall is award season, so the distributors who are knocking on my door right now are releasing the films that already have the most funding, made by veteran filmmakers that have the backing to make them successful. Those filmmakers predominantly white people.” She added that upcoming programs that included shorts films aimed to rectify the imbalance. “I’m hoping that come the new year, once we’re coming out of award season, we can really dig in,” she said.

As much as the rentals helped keep the lights on, Messinger added, she wasn’t concerned about box office. “Nobody builds a cinema to make money,” she said. “Ticket sales aren’t going to do that.” Instead, other business opportunities come from a burgeoning membership program and an adjoining events space. “The business model has to have a balance,” she said. “That the challenge of a single-screen cinema.

For Alpert and Tsuno, DCTV is a world they inhabit 24/7. After joining Alpert briefly in the theater, Tsuno excused herself to go upstairs and prepare dinner. “We’ve got seven days a week to satiate everybody’s taste,” Alpert said. “Are we going to have something that everybody likes all the time? No. We’re happy to have constructive criticism and we’re going to listen to that criticism. Are we going to get everything perfect? No, but we’ll get it really good.”