The title of Kirsten Johnson’s extraordinary new documentary, Dick Johnson Is Dead, is not a true statement  — yet. Dick Johnson, the filmmaker’s beloved father, is not dead. Still, this oddly poignant and sneakily provocative movie, which is now streaming on Netflix, shows him dying any number of ways, twice, thrice … one starts to lose count after awhile. A trip down the stairs. An air conditioner falling on his head. A construction mishap involving a plank. Another trip, this time on a curb. There’s blood, twisted limbs, the cringing thud of a body hitting concrete. Somehow, there’s also laughter.

In real life, the elderly Johnson is dying of natural causes; he suffers from dementia. And so these fake deaths, staged by father and daughter, are all nightmare visions of what might happen to such a man out in the real world. They’re jokes, sure. But in real life, he has already begun to make dangerous errors — like, for example, driving through a construction site and making his way home on four flat tires. It’s no mistake that the staged deaths here are all freak accidents, like silent-comedy whimsies and gags that tilt away from morbidness and violence toward cartoonish hilarity. Watching them reset and restage these accidents is like watching a supercut of the Road Runner dropping anvils. And in Dick Johnson Is Dead, the anvil drops, and drops, and drops.

It is, forgive me, a killer premise. Frankly, it’s also easy to imagine a version of this that mostly coasts on the cleverness of that premise and is just as poignant, even as funny, and sort of leaves it there. But Johnson’s doc is unusual. It stands out in part because the filmmaker — a non-fiction cinematographer by trade, thus someone used not only to seeing the life and labor that thrive through a camera lens, but also living it — has peeled back the artifice of moviemaking in precisely the way that her project has scraped her father’s imminent death of some of its mystery. In a way, it plays like a behind-the-scenes look at the “movie” she and her father are making, comprised of the stuff a Hollywood movie would save for its DVD extras.

But those extras are of interest to Johnson. Same with the sound and camera people, the stuntmen, the makeup technicians with their bottles of fake blood, and every other worker therein. Because these are her people, as  is her star is (of course). As much as Dick Johnson’s humorous meta-awareness of itself as a movie, the subject himself is something that no other film of this kind might have. Dick — professional psychiatrist, lover of fudge, father, widower, jokester — was plainly one of a kind, and unusual. His gameness for this odd project is evidence enough of that. We get a shard of insight into the personality and humor of the man, as well as a disarming summary of his attitude toward the death that he already knows awaits him. What’s as endearing as it is unsettling, however, is how naturally it all seems to both him and the movie. It isn’t so much that he’s fully reconciled himself to shuffling off this mortal coil and therefore sees no need to be a sourpuss about it. In fact his daughter takes care to confront the insecurities of the man, for example his lifelong embarrassment over his club feet, but also, in the present tense, his sheepish awareness of the fact that his memory is slipping.

The tone of the movie is so contagiously light at first that it takes a pastor at his church — a man who no doubt presides over the deaths of his friends and community members by trade — to point out the obvious: The whole thing is weird! “This is not good for me,” he says, getting emotional at the sight of his buddy asleep in a coffin during a mock funeral. “But this is a movie,” he continues, “and I keep reminding myself that this is a movie. And you see a lot of weird things in movies that never happen.”

Death will happen, however, and his daughter had the foresight to enlist him in the making of this movie, do not mitigate the pure fact of his no longer living. Of the many things that distinguish Dick Johnson Is Dead, one is that the filmmaker’s portrait of her father is by no means so simple, or simply feel-good. The portrait we get of this man is by no means that he is a fully resolved, blemish-free individual completely content with himself — he’s simply a human being. Common is the documentary that falls in love with its subject. Rare is the movie that makes you fall in love, too. 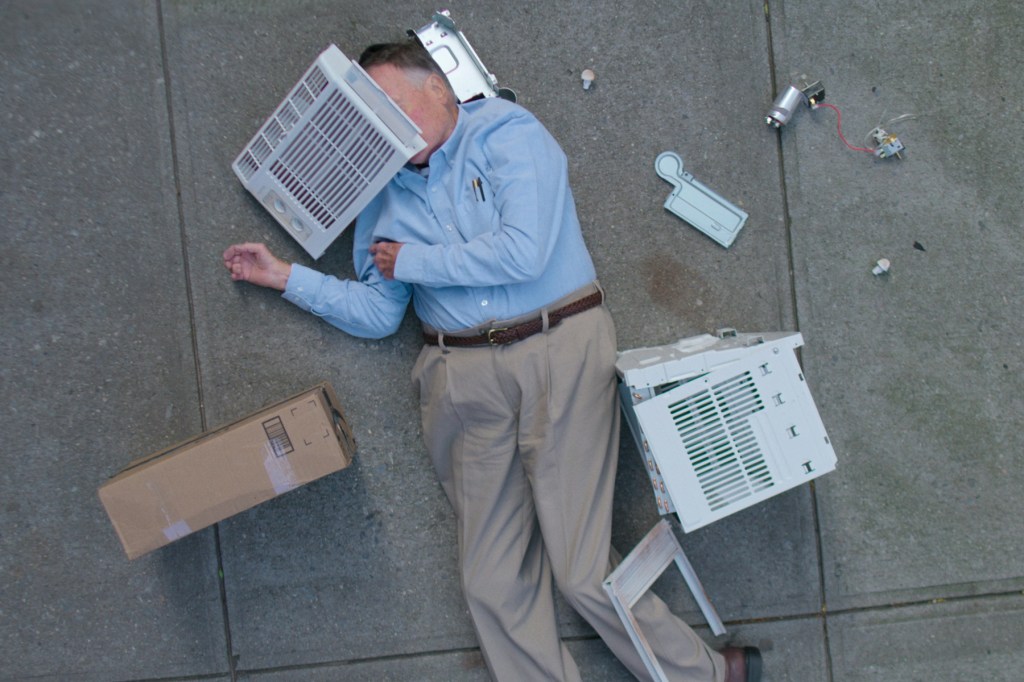 But it can’t all be jokes. The inevitability of Dick’s death persists despite all the constant, playful fiction. In one scene, they clear out Johnson’s office, changing the message on his answering machine to redirect patients to a doctor who isn’t retired. Dick lifts a heavy-looking box of books. Kirsten notes from behind the camera that the situation was a heart attack waiting to happen. This is no idle fear, since her father had had a heart attack in 1987, thanks — the joke goes — to a double fudge cake a friend had made. This being the movie that it is, we visit the woman who made the cake; she proceeds to bake him another one. We  then learn that this woman is by now dead: “In loving memory,” the text onscreen says.

Part of the power of this movie is in the way every other minor accident they film gets magnified and made comically excruciating. Even a simple fall has meaning, here, and painful context. Kirsten’s mother had once fallen down the stairs, breaking a hip. “That was when the brutality started,” Dick says. (His wife passed away from Alzheimer’s in 2007.) Then, in a surprising reenactment, he falls down the stairs and “dies.” Compare this to the reality of a long shot of Dick riding in a car, having now moved in with his daughter and living in Manhattan. The moment begins with him singing a song from Popeye and ends with him drifting, experiencing the same cognitive fade-out that his daughter informs us, via voiceover, has been happening more often.

Even this, the mere documentation of it, is tethered to a worldview, not only concerning images or illness, but to Dick Johnson’s own beliefs and the role these gags might play in the bigger picture. This is a family of Seventh Day Adventists, believers in the promise of Heaven to the righteous. Believers, also, in the fact that Heaven is what will come only with resurrection. Resurrection is what happens every time Dick Johnson dies and gets back up and resets the scene. Which, given a little thought, is a piercing, provocative idea.  Maybe it’s no mistake that Johnson’s idea of Heaven, as it’s playfully staged here, features him sitting alongside the likes of movie stars like Buster Keaton and Bruce Lee. On top of it all, Johnson’s movie plays on (and complicates) the ability of the moving image to resurrect what’s lost — the power of those images to contain and sustain the life of a person. Movie stars never die because we can always saturate ourselves in their images. In truth, they are more alive to the vast majority of us onscreen than they could ever be in the flesh.

Regular people, however, don’t live on through catalogs of Hollywood spectacles. Their genre is much more intimate and ephemeral, far more easily lost, but also far more treasured: the home movie. The impulse that seems to drive this documentary isn’t just the time Kirsten gets to spend designing macabre jokes with her father, though, as the footage we see makes clear, the bonding between them that happens is clearly, and very movingly, inherent to the idea. It is a lovely excuse to rend Johnson’s work as a filmmaker to her work, her life, as the daughter of a man she loves and whose life is too vibrant for any one image or gag to contain. It’s a work that’s equally, though subtly, also about her mother. What little footage she has of her late mom, she tells us/shows us, are images of her in decline. Missing are images of Johnson’s mother comparable to what she has of her father eating chocolate fudge, laughing with strangers, kicking his feet back on a movie set. Those fleeting moments, in other words, that mean the most to the people rewatching them — the people left behind.

And so you may watch Dick Johnson Is Dead with the distinct sense of a filmmaker attempting to correct for that absence — that she wants to preserve the man as he is, before his decline into someone who no longer recognizes her the way her mother no longer recognized her. That, in a way, is what motivates the creation of home movies — and it’s why it’s wonderful that Dick Johnson Is Dead so often feels like one. Home movies are less about the stories we, the people filming them, are trying to tell, and more about the lives and moments we preserve, accidentally and not. They are an archive of the everyday and are intended not for a mass public, but for a private, familial one. Isn’t this what makes them so eerie, so disarming?

Those moments are, as anyone who’s seen Johnson’s Cameraperson (2017) knows, of specific interest to this filmmaker. She was already decades into her career as a cinematographer when she made that movie, entirely comprised of unused footage from many years of work as a nonfiction collaborator, and crafted into an experimental riff on all that images can and can’t contain. Johnson’s specialty, her genius, is for taking these marginal realities and shaping them into art. When her father asks why she makes documentaries rather than fiction films, where the “big bucks” are, she answers, “Real life is much often more fascinating than what you can make up.” For all its playfulness, it’s the real, stinging, joyful, inconvenient reality of life that Dick Johnson Is Dead gives us. It’s a committed act of preservation: a looping, reeling, repeatable act of love. “As much as I may be trying to kill you off,” she says, “I’m not trying to get rid of you.” Dick Johnson Is Dead is the proof.