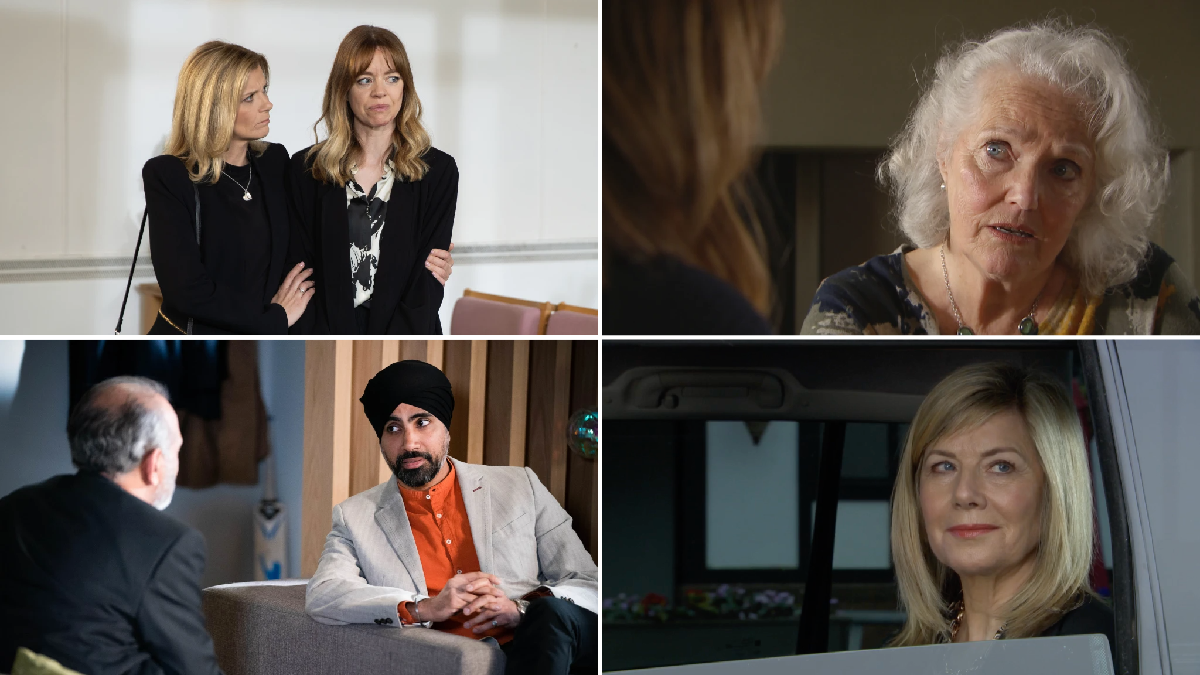 It’s never a quiet week in soapland as this coming week, characters attend a funeral, new friendships are formed, a newcomer bravely comes out to her daughter and someone’s life is put in terrible danger.

Over in Coronation Street, Weatherfield residents gather to say goodbye to Imran following his death. It’s a tense environment, however, as suspicions continue to rise about how truthful Toyah is being over Imran’s final moments.

In EastEnders, Ben begins to have doubts about reporting Lewis to the police, fearful he won’t be believed.

Up in Yorkshire, Emmerdale’s Mary Taylor finds a friend in Kim and later, she bravely comes out to daughter Rhona.

And in Hollyoaks, The UnderTaker continues to cause a nightmare as one character is left with no choice but to leave the village…who will it be?

1. Imran’s funeral takes place, and Toyah delivers heartfelt eulogy, saying that she wishes it was Imran who survived the car crash. Peter, meanwhile, tells Toyah about Adam’s allegation, and that how the police have questioned him about her desperation for a baby. Toyah tells DS Swain there are things they need to discuss.

2. Brian suggests to Cathy that they get married! Evelyn reckons Cathy should come clean about her misgivings, but Cathy accepts Brian’s proposal instead. Brian, meanwhile, puts an offer on a house in Cornwall in the hope that she’ll come with him. Will she do so?

3. Jack overhears Debbie discussing how Kevin had an affair with Molly behind Tyrone’s back, which resulted in his birth, something which he struggles to comprehend.

4. Abi has to reapply for custody of baby Alfie. In the waiting room, she puts her foot in it, as she slags off the judicial system to a woman nearby, unaware that it’s the judge presiding over her case! The local authority solicitor lists her failing as a mum, making Abi certain she’s lost Alfie once more.

5. Phill breaks the news to Fiz that the whole house needs rewiring as it’s a death trap. When Tyrone suggests Fiz and the girls move into No.9 while the work is carried out, Phill reckons it’s for the best.

6. Gail looks at all the empty wine bottles in the recycling bin, and subsequently confides in Shona that she thinks Audrey is drinking too much.

7. Debbie confronts Nick and Leanne and reveals that there’s £4k missing from the business account.

8. Kathy fusses over Ben a bit too much at the start of the week, as he begins to have doubts about reporting Lewis to the police.

9. During a conversation with Jay, Ben decides to tell him about his sexual assault. But when Jay inadvertently puts doubts in Ben’s mind, he concludes he won’t be reporting Lewis to the police as he’s worried the police won’t believe him.

10. Elsewhere, Stuart finds a friend in Chelsea, who offers him some advice when it comes to connecting with a newborn baby.

11. As the week continues, Lewis is fired from his job at The Albert after what he did to Ben. Wanting revenge, Lewis finds Peter and tells him Ben was behind his attack.

12. Meanwhile, in the club, Zack gets chatting to Sam and the two of them begin to drown their sorrows after a difficult week. But where could things lead?

13. As her crush on Peter develops, Dana receives a gift and assumes it’s from him, not Bobby. When Dana finds Peter, she leans in for a kiss – but what will happen next?

14. Towards the end of the week, during a meeting with Ranveer, Kheerat isn’t impressed when he puts forward the idea of finding him a wife. To make matters worse, Suki agrees with Ranveer’s plan, but will Kheerat tell them he’s in a relationship with Stacey?

15. Nicola is accosted by a group of teenage girls on her way to the car. She’s mugged, beaten – and left bloodied and unmoving. She’s taken to hospital, and a worried Jimmy sits by her bedside, desperate to know what happened. Nicola wakes up, but she lies – claiming she cannot remember what happened. The truth comes out, however, when Gabby finds a video of her attack being circulated online.

16. Mary is evasive when a question from Kim evokes some painful memories. Kim offers support, as Mary comes out, relaying her story of her long lost love. Mary is unsure when Kim recommends that she come out to Rhona, but ultimately she does just that. Rhona, however, is shocked, and starts to question if her whole family was based on a lie.

17. Marlon struggles, but he manages to take his first step on a walking frame, much to his delight. Rhona, meanwhile, proposes! How will he react?

18. Cain is tricked into attending Faith’s birthday party, and he wastes little time in scolding his loved ones. Struggling to get past his grievances with his mum, he tells her that he wishes she’d drop dead, prompting Faith to reveal that her cancer is back – and it’s incurable.

19. Cathy is over the moon when Samson suggests going to River’s party together. But her bubble is burst when he says it’s just as friends.

20. Laurel surprises herself as she admits she’s ready for a new relationship.

21. James realises that the only person who can truly help him is The Undertaker! He meets with Norma, but it’s clear that he’s in way over his head. One thing leads to another, and the lawyer ends up in a coffin begging for his life! Norma tasks him with a very dangerous delivery, and soon true intentions for him are revealed. She makes a chilling offer, one which leaves James stunned, and he’s ultimately left with little choice but to leave the village.

22. Sally gives John Paul a chance to prove himself. John Paul takes Matthew-Jesus to a comic event, but things take a turn, as the former deputy head teacher turns to alcohol, before lashing out, with painful consequences. John Paul is rushed to hospital.

24. Eric sets his sights on another Hollyoaks teen. But who?

25. Wendy returns to the village, hoping to use John Paul’s accident to her advantage. Sally, however, overhears a phone call to Silas, which puts the schemer’s plans at risk.