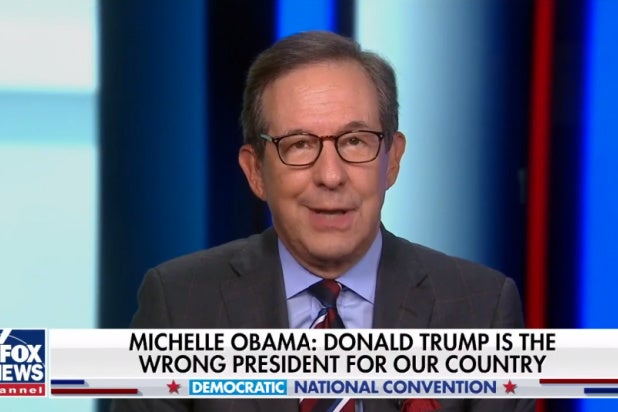 You might not expect anything that happens at the Democratic National Convention to garner much praise from the folks at Fox News, but Michelle Obama’s speech that closed Monday night’s session was so good that multiple Fox personalities were full of compliments about it.

“It’s interesting Michelle Obama, as she said, doesn’t like politics and she said that this speech was her main contribution to the Biden campaign. It was a heck of a contribution. She really flayed, sliced and diced Donald Trump, talking about the chaos and confusion and lack of empathy especially coming from this president and this White House,” Chris Wallace said, a nice endorsement from someone who himself recently flayed, sliced and diced Trump.

“This was a very effective speech.”

A pair of hosts from the Fox News show “The Five,” Dana Perino and Juan Williams, joined in on the Michelle Obama lovefest on Fox News.

“I didn’t know how she could outperform what she did in 2016 — we all remember ‘when they go low, we go high’ — but she really did it,” Williams echoed.

And Perino chimed in with some praise not just for how effective Obama’s speech was, but that she was able to make it feel so impactful without any crowd to back her up with some infectious enthusiasm.

“Very difficult to connect with an audience without an actual audience there with you, but she has the ability to connect with people through the screen. You just got the sense that when you talk about authenticity, she has it in spades,” Perino said.

“She has that voice, she has clarity and she knows what she was out there wanting to do. And she was trying to get everybody to really focus and she had a call to action: ask for your ballot tonight. I think the DNC, if they look over the course of the night, the first virtual convention of our history, I think they would say Michelle Obama stuck the landing.”

You can watch the segment in the video embedded below.