The romantic tension between Call the Midwife‘s Trixie and Matthew has been building ever since the nurse helped the widower find a nanny for Jonty.

By the time last season’s Christmas special aired, the chemistry was undeniable, but neither acted on it until Sunday’s Season 11 installment when Matthew told Trixie he wanted to send her all kinds of flowers to express his growing feelings for her. Trixie had been decorating the outside of Nonnatus House in preparation for the Centenary Celebration, and the midwife was lamenting the fact that the rain was turning their chrysanthemums into soup, and suddenly, Matthew got inspired.

The wealthy businessman rattled off a litany of floral varieties he would and could send her, and by the time he got to red roses, both of them were blushing and giving one another infatuation-filled glances. As Matthew explained, red roses symbolize love, and the smitten pair definitely seemed to be feeling that vibe. That’s why he dropped his umbrella and went in for a kiss.

Of course, there are those who have questioned if Matthew and Trixie rushed things after Fiona died bravely fighting leukemia, but enough time has passed, and Jonty’s dad said he was ready to fall in love again. Who are we to question that? Besides, it’s nice to see Trixie find love at last, and Call the Midwife is all the better for it, too. 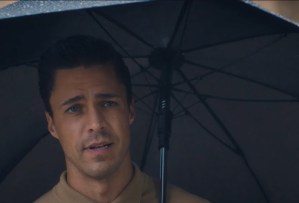 The love connection between the two was a welcome reprieve from the otherwise somber episode, which tackled the teen pregnancy of an aspiring singer named Julie and the growing homeless population in Poplar. Sisters Monica Joan and Frances had to say goodbye to a dying transient named Albert, and Nurse Nancy had to do the same for a long-suffering man named Bernard.

Bernard’s story was especially tragic, and by the time his foot fell off from gangrene, it was abundantly clear the poor soul wasn’t long for that world. Fascinatingly, Nancy had originally and harshly judged Bernard, but Fred pointed out to her and Violet that Bernard was a World War II vet who deserved their respect. Nancy realized the error of her ways and started talking to Bernard and helping him when and where she could.

That’s when Nancy learned Bernard suffered from the trauma of losing his mother at a young age and stumbled through life struggling to find peace and purpose. Joining the military to fight in the war didn’t help, and neither did alcohol, which eventually became his only coping mechanism.

But before he died, Bernard benefitted from Nancy’s kindness, and she wore a pretty yellow dress for him, which was his mother’s favorite color.

What did you think of the latest Call the Midwife, and are you happy Trixie and Matthew locked lips? Drop your thoughts in the comments.