Mr Bower discussed getting factual stories about Meghan Markle for his new book with Good Morning Britain hosts Ben Shephard and Charlotte Hawkins. The royal author explained that 80 people had given him personal stories about time spent with the Duchess. Mr Bower went on to discuss spending two days in Mexico meeting Thomas Markle, the Duchess of Sussex’s father, in order to find out more about her parents’ relationship. The royal author described the Duchess as “intelligent, determined and ruthless.”

Ms Hawkins said: “What were the revelations that for you, sort of stood out the most because obviously, you know you approached this, there are going to be bits you know about bits you want to dig into, was there a particular part of it that you thought actually I wasn’t expecting that?”

Mr Bower added: “Well there was a whole story about her attitude to people she works with, especially in a photoshoot about Marks and Spencer’s chain store in Canada, where the experience of all 80 crew was just horrendous.

“And there was an agent who told… Two agents who told horrible stories about her bullying and her oppression, that was really quite a revelation.

“Her father finally opened up quite a lot about the relationship between him and her mother.” 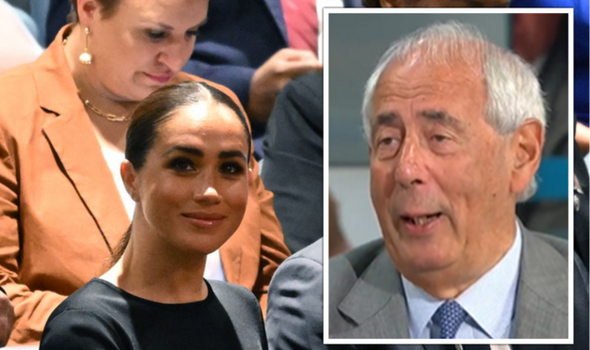 Mr Shephard said: “Did you speak to him directly?”

Mr Bower said: “I went to Mexico for two days, and it was fascinating, I know of people in Hollywood who just speak, and told very interesting stories about suits for example.

“How she became Rachel Zane, and Rachel Zane became her, and in Toronto how she built up her profile, that was pretty impressive.

“But, overall I came across with the impression of a woman who was very intelligent, very determined, very ambitious… But also ruthless. And in the end in her terms successful…”

Mr Bower continued: “Normally from people who don’t like Meghan Markle, because she made it pretty clear to all her friends the people that work for her… Not to talk to me.

“So it was quite an uphill struggle, well I found enough people, more than enough nearly 80 people to talk.”

Mr Shephard added: “But if we know that they don’t like her, why are they going to be offering an unbiased account of their experience?”

Mr Bower said: “I understand because I sifted through, I don’t put in stuff which isn’t true and can’t be checked.

“And also I had some admiration for Meghan, she’s succeeded quite well in her life and ambitions, so I was able to balance it all.”