A Place In The Sun rounded off the week in South Alicante, Spain with Jean Johansson finding a holiday home for Kamlesh and Sukhwinder. Having been married for 42 years, and with all four children having flown the nest, the couple decided it was time to buy a winter home in Alicante. With a budget of £95,000, it was up to Jean to find them a property to buy. But the couple kept changing their mind, and when Jean eventually found them the ideal holiday home, they shut down the idea of registering their interest or putting in an offer.

Property one, valued at £89,196, was a recently refurbished two-bed apartment in Aquas Nuevas, featuring a courtyard garden and a veranda at the front.

But the moment Kamlesh and Sukhwinder stepped through the door, they had seen enough.

The size of the kitchen was unsuitable for the couple and they decided they didn’t need to see anymore of the property.

“Okay, so we haven’t got off to the best of starts,” Jean said. “They have ruled out the two-bed apartment straight away as the kitchen is too compact.” 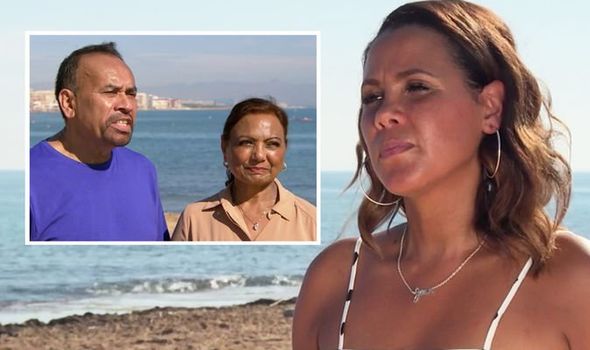 The second property the couple viewed was another two-bed apartment but in Villamartin priced at £102,674.

It was on the first floor, and the balcony looked over the communal gardens.

As for it’s location, it was three miles from the beach, and the local town is where 60 percent of residents are British ex-pats.

The couple liked the layout and the kitchen offered everything they were looking for.

Property number three, was a two-bed townhouse in Cuidad Quesada, priced at £98,170.

While this kitchen was of similar size to that in property number two, Kamlesh and Sukhwinder didn’t like the design.

“I can see the light but I’m not happy with the cupboards – they’re a bit out dated,” Kamlesh remarked.

When Jean asked them whether or not it was a contender, Sukhwinder replied: “No. The kitchen needs redoing, upstairs the bathrooms are nice, but we could do with another bathroom and bedroom.”

All of a sudden, Jean was no longer looking for a two-bed, one – possibly two bathroom apartment.

“You two don’t ask for much!” She joked. “Another bathroom and bedroom? On their budget it isn’t going to be easy.

Jean managed to deliver what the couple were looking for with property number four – a three-bed duplex in La Mata for £92,857.

But, Kamlesh and Sukhwinder didn’t think the layout of the bedrooms fitted their needs.

“You’ve given us what we asked for – but it doesn’t appeal to us, it’s the layout and the kitchen again,” Sukhwinder explained.

Jean “pulled out all the stops” for the final property, which was a three-bed semi-detached villa in Los Balcones.

With a large roof terrace with views towards the sea, it offered an open-plan living and dining room, which led into the kitchen.

Three bedrooms and a ten minute drive from the coast, it was valued at £98,214.

This villa offered the couple everything they were looking for, but when it came to putting in an offer, or even registering their interest, they held back.

“You’ve given us what we’re looking for!” Sukhwinder told Jean.

When the agent pressed for a number to secure the property, they replied: “Not at this present moment – we want to come back to the area.”

“What about registering your interest with the agent?” Jean asked, and Kamlesh said: “Not at this moment. It’s a big commitment.”

“It’s our decision now, and we will take it up when we come back,” Sukhwinder stated.

A Place In The Sun airs weekdays at 4pm on ITV.