On top of the world (well, almost!): You don’t have to be super-fit to trek to Everest Base Camp. Take your time, soak up the scenery and it may be the adventure of your life

Plenty of people trek to Everest Base Camp every year. They are mostly youngsters with their sights set on getting there as quickly as possible. We did it differently, spending three wonderful weeks exploring the region, soaking up the dramatic scenery and taking days out to acclimatise.

Our guides set a moderate pace and we had porters to transport our luggage. There were even moments when it seemed that we were taking a leisurely stroll, like a rhythmic, meditation on the move.

Sitting in a French bakery sipping a hot Americano and eating a cinnamon bun was not what I expected 14,400ft (4,400m) up in a Himalayan mountain village. 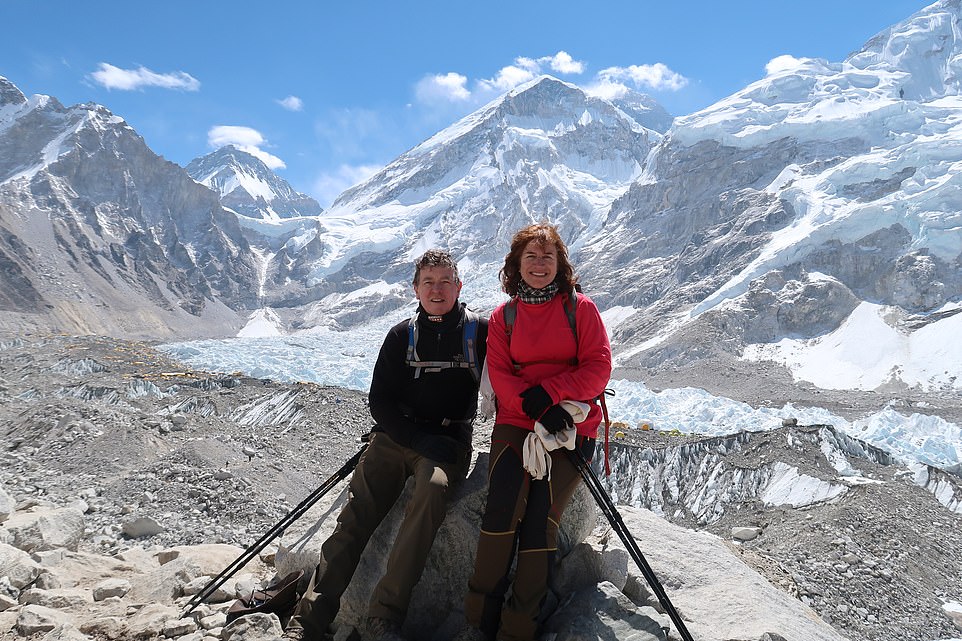 Himalayan highs: Jane Slade and her husband, Neil, at Everest Base Camp 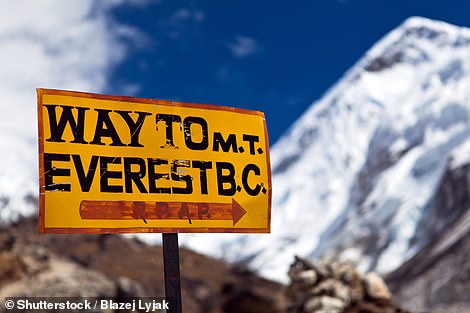 Slow and steady: Jane allowed three weeks to reach Base Camp, which gave her time to explore the region and acclimatise

Deserted but for a few yaks and fluttering prayer flags, Dingboche is like many of the villages we passed on our trek.

It was quiet and cold, with swirling snow sticking to the windows. A few shops were selling woollen hats, loo paper and out-of-date Mars bars.

At this altitude, just 1,300ft lower than Mont Blanc in the Alps, there is no mains electricity.

‘No sun, no light,’ explained the waiter, throwing another log onto the fire.

We had walked for eight days; that is my husband, me, my Australian cousin Jill, her friend Lynne and Jill’s son Ben and his girlfriend Erica. Apart from the latter two, a fit young couple in their 20s, we were all rather older — the whole point of the trek was to arrive in time to celebrate my 60th birthday at Base Camp.

Despite our fitness training, nothing had prepared us for the high altitude. I felt dizzy just looking up at the ice shelves, seracs (columns of glacial ice) and vertical curtains of avalanche trails. Ahead lay vast powder fields and wave upon wave of mountain peaks. I had never seen such untouched beauty. The Himalayas are thrilling yet terrifying. There are more than 50 mountains soaring over 23,000ft.

We caught our first glimpse of Everest, christened Sagarmatha by the locals, as its glistening summit moved in and out of the clouds like a burlesque fan dancer and I wondered what Sir Edmund Hillary and Tenzing Norgay had thought when they first spied Everest at this point in 1953 before they became the first to reach its summit. 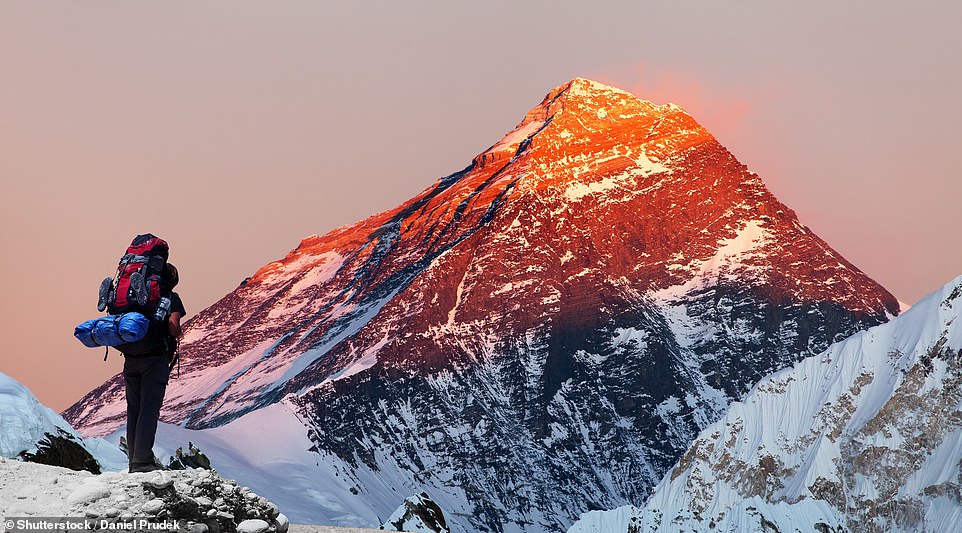 Peaky blinder: ‘I had never seen such untouched beauty,’ says Jane. Pictured is a tourist viewing Everest from Gokyo Valley 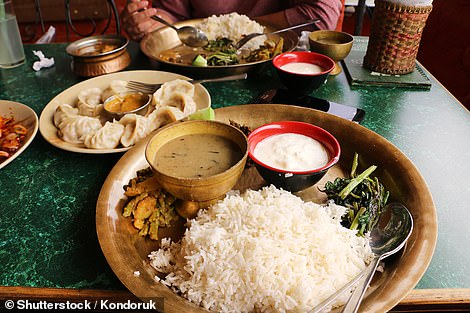 Above is Nepalese dal bhat (a curry of lentils and rice), which became one of Jane’s staple meals

We met Tibetan nuns on a four-hour walk to have their eyes tested, mules laden with gas canisters, locals carrying towering loads in bamboo baskets and Buddhist priests on their way to prayer. We even visited a clifftop monastery at Thamo where shaven-headed boys were being trained as monks.

I loved hanging out with our Sherpas, one of whom, Pertemba, had conquered Everest’s Southwest Face with Doug Scott and Dougal Haston, the first Britons to scale the big mountain in 1975, and Chris Bonington. He had also guided the then Prince Charles on a trek in the Annapurna region in 1980.

Deft and agile at 73, Pertemba is so revered that even the dust stays away from his shoes. His measured pace enabled us to keep going for six hours a day, stopping only for him to greet old chums and pose for selfies with adoring fans.

‘The last time I had a headache was in 1970,’ he stated while we were sitting around a hot stove one evening drinking ginger and honey tea.

Our leader Sherpa Kalsang ensured we climbed just over a quarter of a mile a day and then rested to acclimatise. He had grown up in the biggest village in the region, Namche Bazaar, which has a ski-resort feel with steep streets lined with coffee shops, clothing outlets and small hotels, but no cars.

Kalsang told us how, as a boy, he used to walk for two hours up the steep slopes to school every day and look after his parents’ yaks at weekends.

We stayed at the Hotel Tibet, which had magnificent views across the red, green and blue rooftops to the Kongde peak (20,298ft) which glowed orange at sunset.

That heart-thumping excitement of waking each morning here never dulled. There is nothing quite like dawn breaking in the Himalayas. Sometimes there was a spectacular sunrise and birdsong, or a moody mist and chanting drifting from a local monastery. 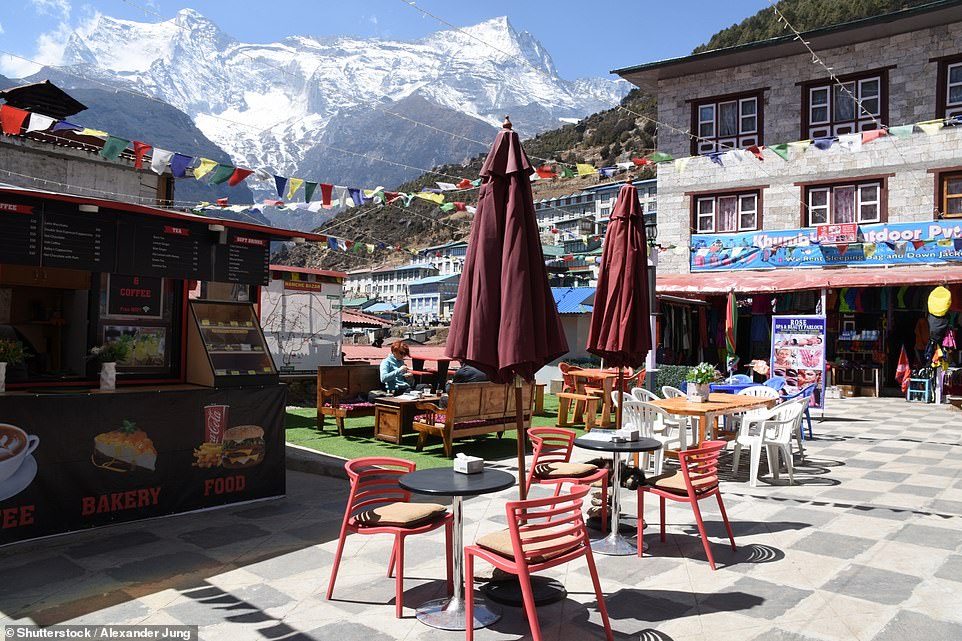 Jane stayed at Hotel Tibet in Namche Bazaar (above), ‘which had magnificent views across the red, green and blue rooftops to the Kongde peak (20,298ft)’ 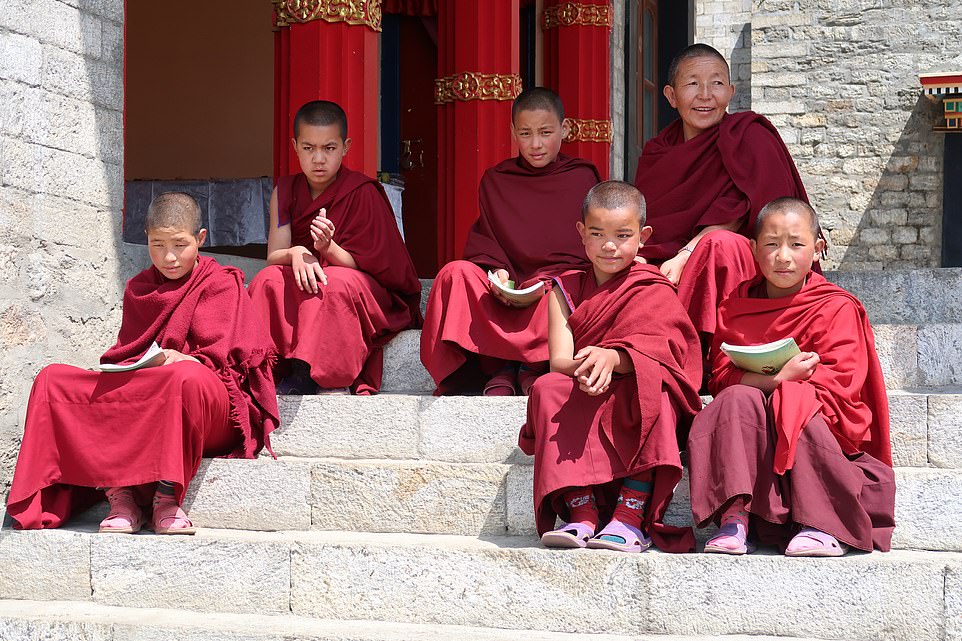 TIPS FOR YOUR TRIP OF A LIFETIME

We usually set off at 9am at a slow pace, taking care to walk anticlockwise round the prayer rocks and painted stupas (dome-like Buddhist monuments). We stopped to look at dry-stone quadrangles filled with crops, watched pheasants dance through juniper trees and saw lichen hang like gossamer cobwebs from branches.

The scenery was overwhelming. We were so high that sometimes we were wading through clouds while helicopters flew below us.

As it became colder, we bathed in the warmth of the sun when we emerged from the shadows. We stayed in basic teahouses. The higher we climbed the more basic they became. And water was so limited that we would fill our drinking bottles with boiling water to warm our sleeping bags at night and then drink from them during the day. Showers always cost extra and were not always available. 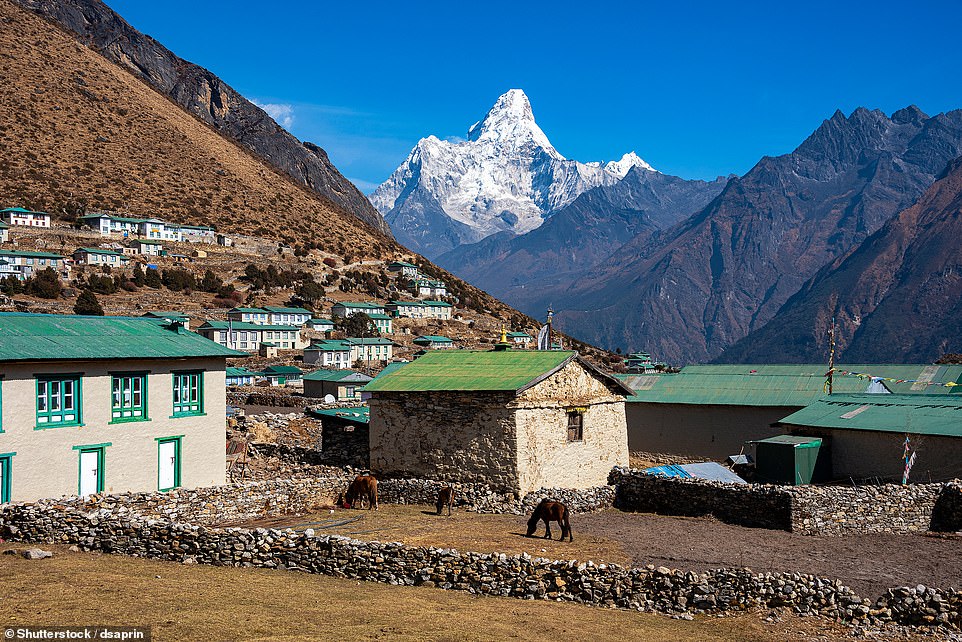 On one of the non-trekking days Jane walked to the village of Khumjung (above), home to the celebrated yeti scalp, housed in a glass dome in the monastery

Jane Slade and her family travelled with the Walking and Climbing Company which organises treks in Nepal, Bhutan and Tibet. Prices for a 20-day Everest Base Camp trek start from £1,950 pp for up to seven people and includes all meals, guides and accommodation, excluding flights (walkingandclimbing.com).

Food was plentiful, though. We lived off fresh vegetable and garlic soup, Nepalese dal bhat (a curry of lentils and rice) and potatoes, pasta and rice. We kept hydrated with varieties of tea: marsala, ginger and lemon, green, honey and lemon.

Non-trekking days were spent exploring monasteries and villages. We walked down the long track of prayer plaques to Pertemba’s village of Khumjung where he is rebuilding his 400-year-old ancestral home which was badly damaged during the 2015 earthquake.

Khumjung is where you will also find the celebrated yeti scalp, housed in a glass dome in the monastery there.

The sky was cobalt blue and the air crisp when we started on the track to base camp. My excitement was palpable when tiny yellow dots suddenly became visible.

‘I can see the tents, we are nearly there,’ I yelled. Surrounded by frozen waves of ice we scrambled along the track as fast as we could.

Base camp was all but empty except for some helicopters and expedition leaders. All the climbers were on the mountain.

The sharp teeth of the infamous Khumbu ice fall, which mountaineers have to navigate to reach Camp One, sprawled before us and seemed even more treacherous than I had imagined.

We had made it. Tears streamed down my face. I was too moved to speak.

That night I had the fluffiest birthday cake I have ever tasted. A delicious Victoria sponge with home-made sea buckthorn jam. I felt on top of the world.