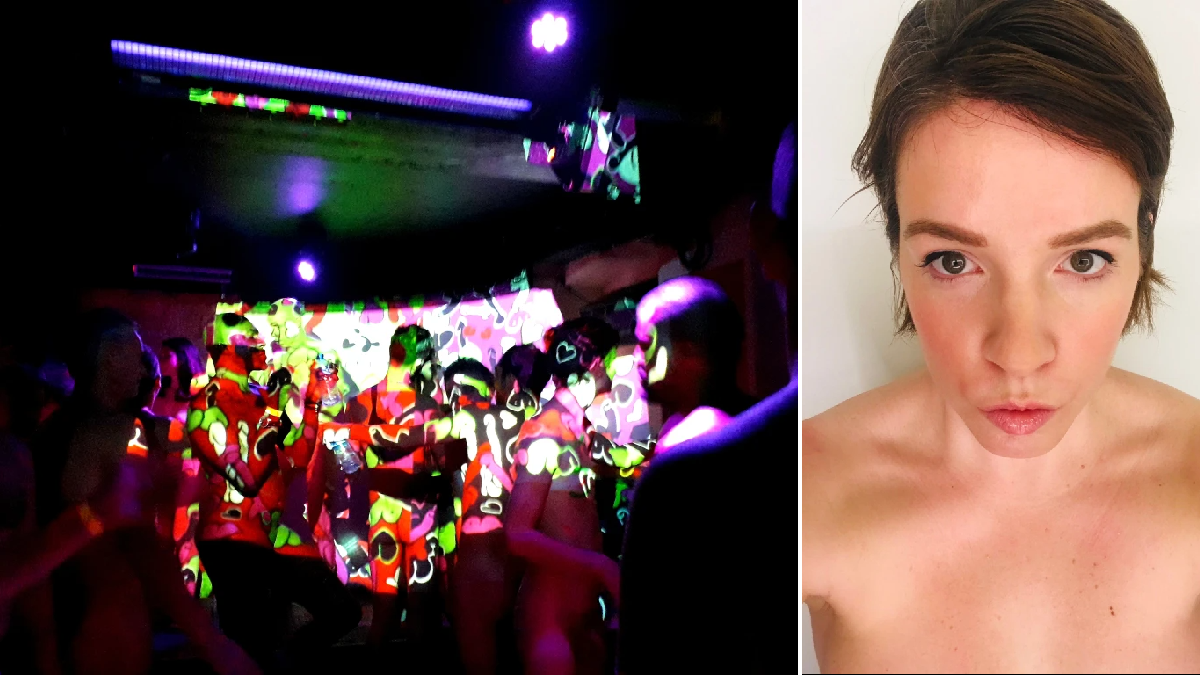 I’m standing in the belly of a small, sticky-floored basement club in central Paris, flushed with nervous energy and wearing nothing but socks, Converse and a rule-bending bumbag.

A small group of butt-naked men awkwardly two-step on the dance floor under the rainbow glow of spinning disco lights.

When Beyoncé’s Run The World blasts, the men start to swing their willies with abandon. It’s dizzying. It’s hilarious. It’s a sight that will be burned on to my brain.

This is my first experience of being naked in a nightclub situation. To be clear, it isn’t some sort of salacious sex party.

The event is called Beautiful Skin and it sets out to de-eroticise the naked body while boosting body confidence.

Co-creators Jérémie Lapeyre and Julien Claudé, who count themselves among the estimated 2.6 million nudists in France, dictate that ‘behaviour of a sexual nature is strictly prohibited’ and pin signs up to remind clubbers to be respectful.

I’d always thought the only way I’d be naked in public would be by accident: sleepwalking out of my flat on a hot summer’s night, for example, or getting my dress caught in a train door and watching helplessly as it was whisked away. I can even change under a towel at the gym with expert precision.

But in honour of National Nude Day, I’m outing myself as a part-time nudist. The day itself originated in New Zealand and since it began at the turn of the 20th century, it’s spread to 30 different countries around the world, including the UK.

The nudist nightclub isn’t actually my first (naked) rodeo. I have taken part in London’s annual naked bike ride (twice) and will never forget cycling over Westminster bridge, boobs jiggling, with Big Ben towering above me, silently judging. And after a recent move to Hastings, a visit to a nearby nudist beach is on my radar this summer.

But what has possessed me to come to a nightclub and strip off? Well, I was curious. It is a fear faced.

And while the public nudity may feel alien, the nightclub setting is familiar. So as I sip my beer, I privately toast myself for having the grit to make it this far.

The vibe is surprisingly sweet. With everyone feeling vulnerable together, I lose count of all the smiles and thumbs-up gestures that come from friendly strangers.

At first I am just so incredibly aware that everyone is naked. But within a few minutes I am holding myself with more poise and confidence.

I feel stronger with every second and sense myself relaxing, dancing next to bodies of all shapes and sizes. When a man with a shock of wild curls leans in and hollers, ‘You can tell your friends you saw 200 penises in one night!’ I burst out laughing – the absurdity of it all feels so freeing.

I leave at 4am (re-clad), feeling like I’ve accomplished something deeply personal. It is totally natural, after all. And now I can see how much of our body hang-ups are just in our own heads. I’m still going to be careful around train doors, though…

The next Beautiful Skin at Le Klub in Paris, St Denis, is on Friday, July 15, tickets £11 via Dice.

Butt out! Three more naked-friendly experiences to try out :

Created in 1998 by a travel agent tasked with organising a new summer event in Seeboden, the World Bodypainting Festival now draws thousands of spectators, bodypaint artists and nude models.

Held for a week, the last three days are open to the public, with concerts, parties and events.

Inspired by the eponymous ancient pagan festival marking the end of winter and the beginning of summer, the modern Beltane Fire lives up to its name with lots of flames.

A daytime procession based on ancient Gaelic ritual gives way to a raucous night-time free-for-all full of flames, body paint and nudity.

The largest culture and music festival in Northern Europe, Roskilde Festival features over 180 bands and more than 100,000 spectators.

Begun in 1971 and originally popular with hippies, it still has a free love vibe, evident in the yearly nude race that takes place around the campsite, with the winners getting a free ticket to next year’s event.