If you’ve had the pleasure of standing in line at airport security recently, you’ve probably noticed the big blue signs warning travelers of new identification requirements coming next year. If you haven’t, you may have no idea that your driver’s license or other state-issued ID could soon become obsolete for air travel.

As of Oct. 1, 2020, every adult needs to show a Real ID-compliant driver’s license (or another acceptable form of identification such as a passport) to fly within the United States. If you don’t have one, you’re not going anywhere ― even if you’re traveling domestically. You’ll also need one to enter a secured federal facility that requires ID.

But what, exactly, is a Real ID? And how do you get one? We have the answers to all your Real ID-related questions below.

What Is A Real ID?

Back in 2005, Congress passed the Real ID Act in response to the 9/11 Commission’s recommendation that identification requirements be tightened. The act establishes minimum security features and bars federal agencies from accepting any ID that doesn’t meet those specifications. However, since most of us carry state-issued IDs, states had to be given time to implement these changes. That’s why we haven’t heard much about the Real ID and its upcoming deadline until fairly recently.

Included among these new security requirements are features that make counterfeiting more difficult. Holograms are often used for this purpose. All Real IDs will also have a barcode that can be easily scanned to pull up information such as the holder’s full name, birth date, license number and more. And according to the act, all the documents presented by Real ID applicants for identity and residency verification must be scanned and stored in a database ― including birth certificates and Social Security cards ― even if those people are denied an ID. 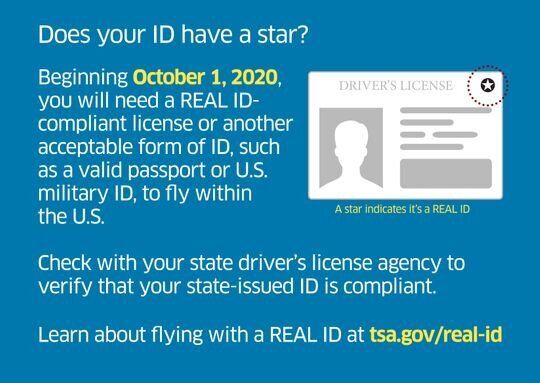 It’s important to note that a Real ID is required only for entering airport security checkpoints and boarding aircraft, as well as entering secured federal facilities and nuclear plants. It’s not required in other instances when you might be asked to show ID, such as voting or registering to vote, applying for or receiving federal benefits, accessing health- or life-preserving services, and more. And if you’re traveling internationally, you’ll still need a valid passport.

“TSA is doing everything we can to prepare our partners and the traveling public for the REAL ID deadline next year,” David Pekoske, administrator of the Transportation Security Administration, stated in an April press release. “The security requirements of the REAL ID Act will dramatically enhance and improve commercial aviation security.”

Despite the TSA’s efforts to educate the public about this new requirement, plenty of people are still unaware or confused about the rules and deadlines. Participation is voluntary on the state level, and earlier pushback by some states over the Big Brother-like nature of the law led to the delayed rollout of some Real IDs. Most states are now in compliance, but a few have needed extensions of their deadlines to various dates throughout 2019. California is currently under review and must reach compliance by May 24, 2019 (you can check your state’s compliance status here).

If you live in a compliant state but still have your “regular” ID, you can keep using it until Sept. 30, 2020. But on Oct. 1 of that year, you’ll need to have one with a star in the top right corner, which signifies you’ve upgraded.

However, if your state received an extension to reach compliance, you can only keep using your old ID until that extension expires. After that, you might need an additional or alternate form of ID between the extension expiration and Sept. 30, 2020. By Oct. 1, 2020, everyone in those states will need to have the Real ID with a star symbol as well.

The bottom line is this: If you don’t have a Real ID, you should probably get one ASAP.

How To Get A Real ID

Everyone age 18 and up will need to meet these new standards for identification. Minors don’t have to show ID to fly, as long as they’re accompanied by an adult who has proper ID.

You won’t be able to get a Real ID online or through the mail ― you’ll have to visit a DMV office in person (sorry). You’ll need to bring the following:

It’s a good idea to contact your local DMV before showing up in order to verify what types of documents are accepted.

Other Acceptable Forms Of ID

If you need to fly and, for some reason, haven’t received your Real ID yet, you’re not completely out of luck. The TSA lists a handful of other approved forms of identification that you can use instead:

The TSA notes that a temporary license or weapons permit will not count as proper identification.

Since the deadline to upgrade to a Real ID is approaching, you might find that DMV offices are busier than usual. In fact, appointments might not be available for several weeks. So make sure you don’t wait until the last minute and get an appointment as soon as you can.