Revealed: Britain’s most popular movie locations, from the Scottish mountains in Braveheart to the estate where Keira Knightley shone as The Duchess

There’s no doubt about it, Britain looks great on the silver screen – something that big shot movie directors have known for a long time.

Lots of UK locations appear in blockbusters, from Bridget Jones to Avengers: Infinity War. But for tourists some, it seems, are more tantalising than others.

A recent poll asked respondents to name the movie locations in Britain they’d most like to visit – and the answers are in. Here we reveal the ranking, in reverse order… 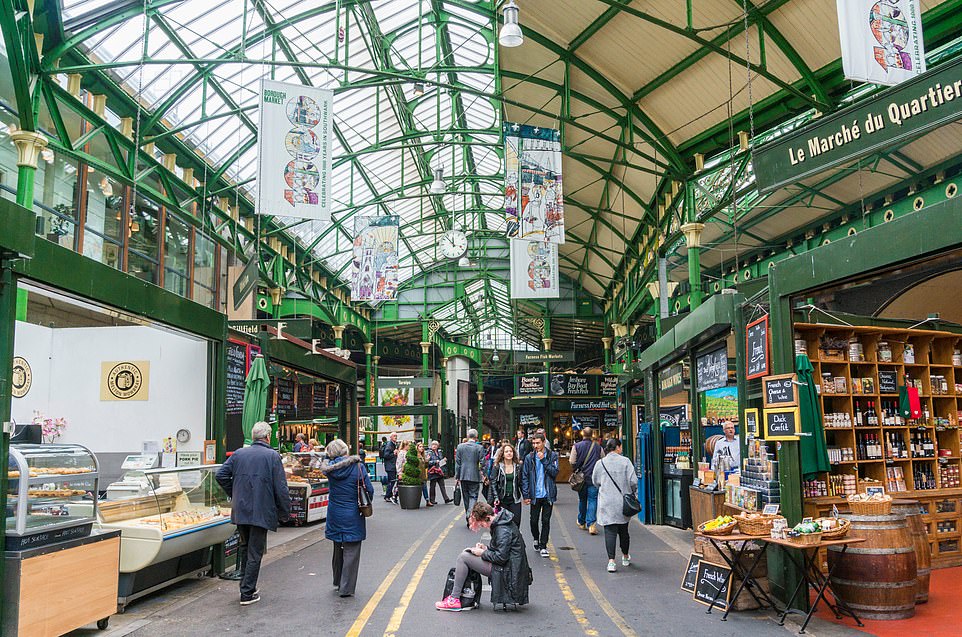 London’s Borough Market, which is a favourite with foodies, appears in all three Bridget Jones movies 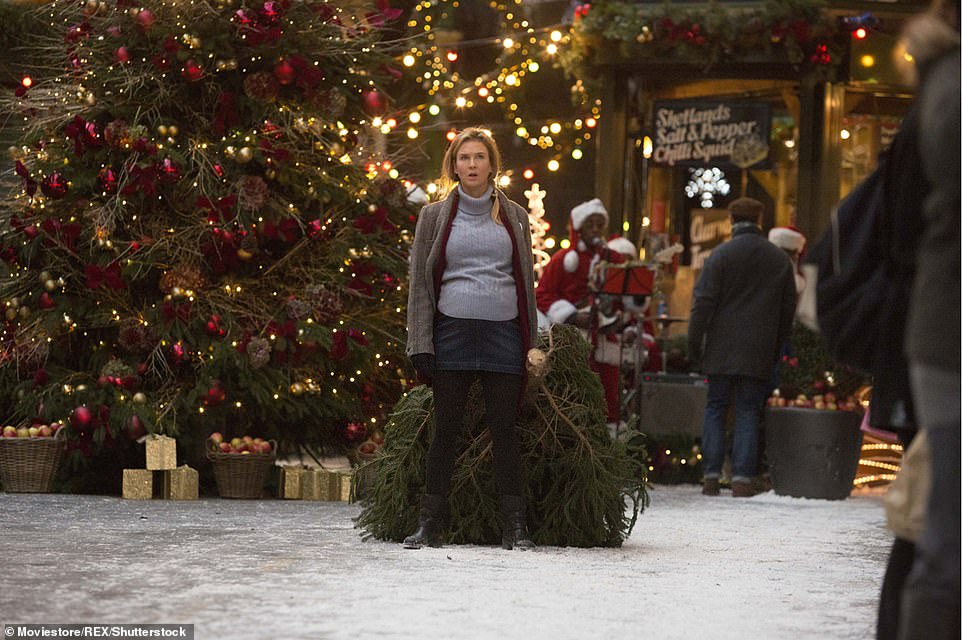 London’s Borough Market has always been popular with foodies, but it has been given a huge tourism boost by the Bridget Jones trilogy.

It appears in all three movies.

For instance, in Bridget Jones’s Baby our heroine is seen dragging a Christmas tree through it. And her house was situated just above The Globe Pub, which is just off the market.

Twelve per cent of respondents in the survey said it’s the movie location spot they’d most like to visit. 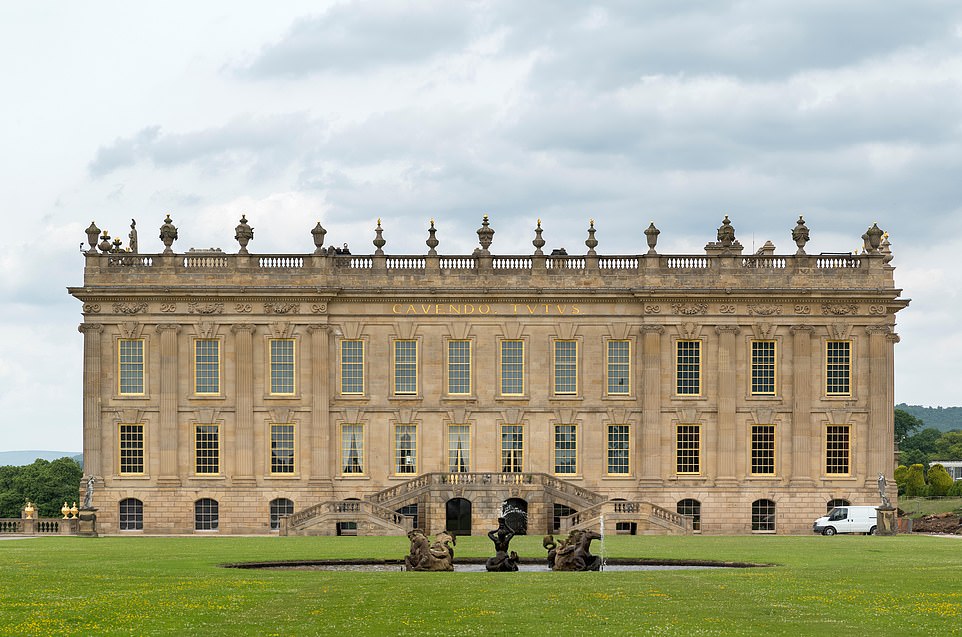 Chatsworth House in Derbyshire is the estate of the Duke and Duchess of Devonshire. It was used to film scenes for the 2008 Keira Knightley movie, The Duchess 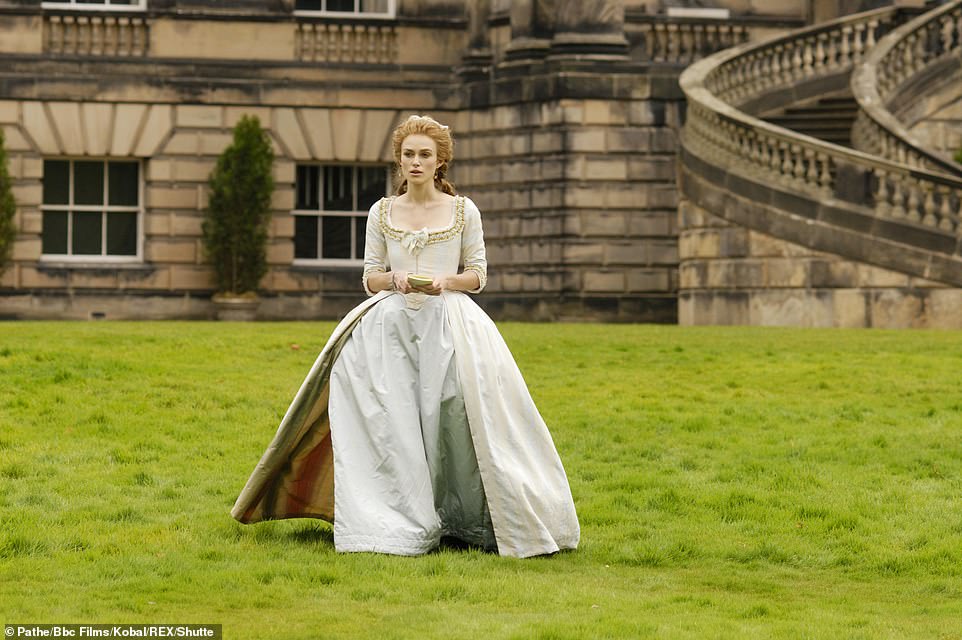 Keira Knightley starred as Georgiana Cavendish in The Duchess. Chatsworth House is open to the public

True-to-life film locations are hard to come by, but one sneaks into the list.

And that’s Chatsworth House, which was, and still is, the estate of the Duke and Duchess of Devonshire. So there couldn’t be any other location when it came to shooting The Duchess, with Keira Knightley playing the late 18th-century English aristocrat Georgiana Cavendish.

While it is still the estate of the Duke and Duchess of Devonshire, it’s also open to the public and therefore extremely popular with tourists.

8. Glencoe, the Scottish Highlands: Featured in Braveheart and Mary, Queen of Scots 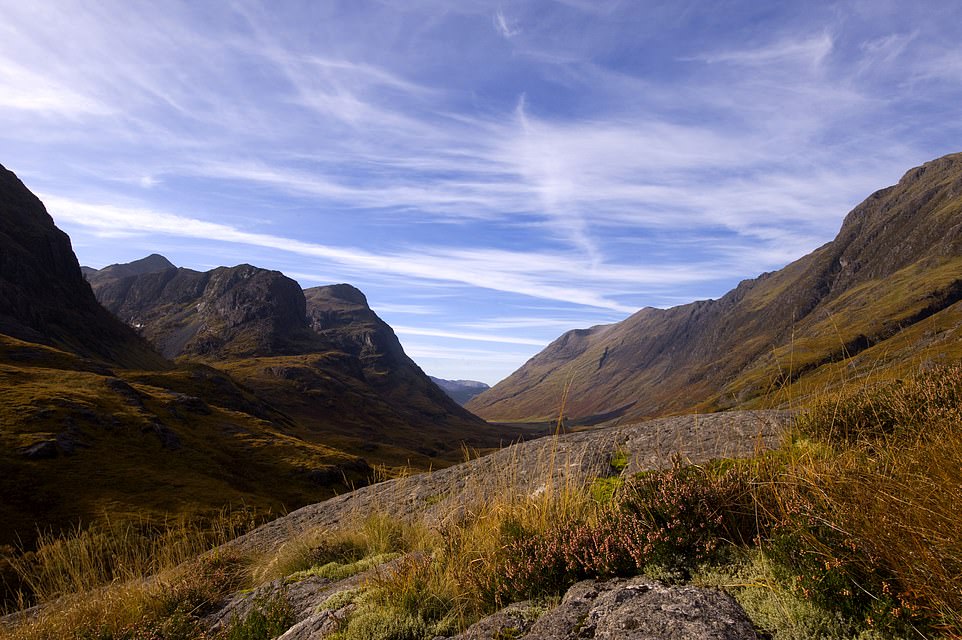 The dramatic hills of Glencoe in the Scottish Highlands have featured in countless movies including Braveheart and Mary, Queen of Scots 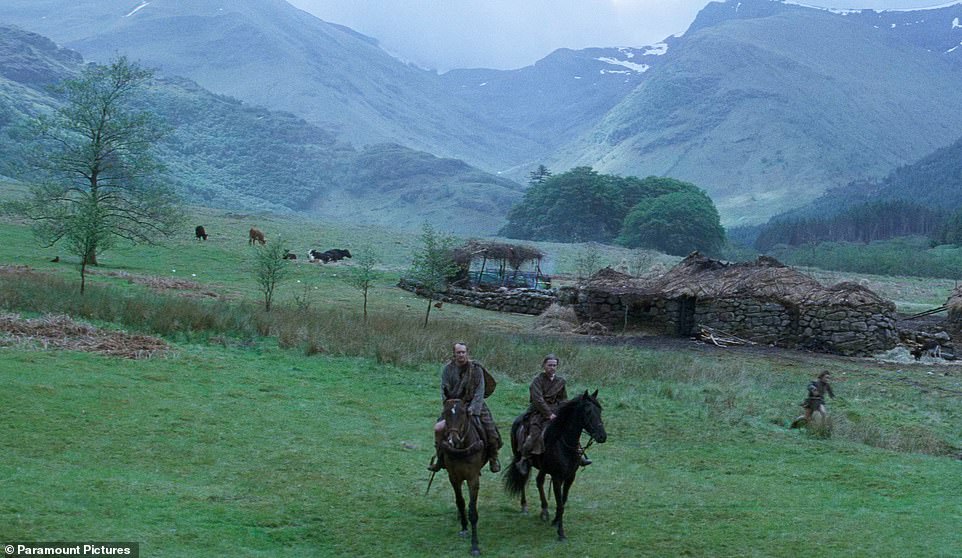 Braveheart was filmed in Glencoe, though this particular scene pictured was shot in Glen Nevis

What do Braveheart and Mary, Queen of Scots have in common?

The answer is Glencoe, the breath-taking area of the Scottish Highlands that is featured in both films.

It’s easy to see why it’s such a popular movie location as it’s a stunning landscape. Fourteen per cent of the respondents voted for it. 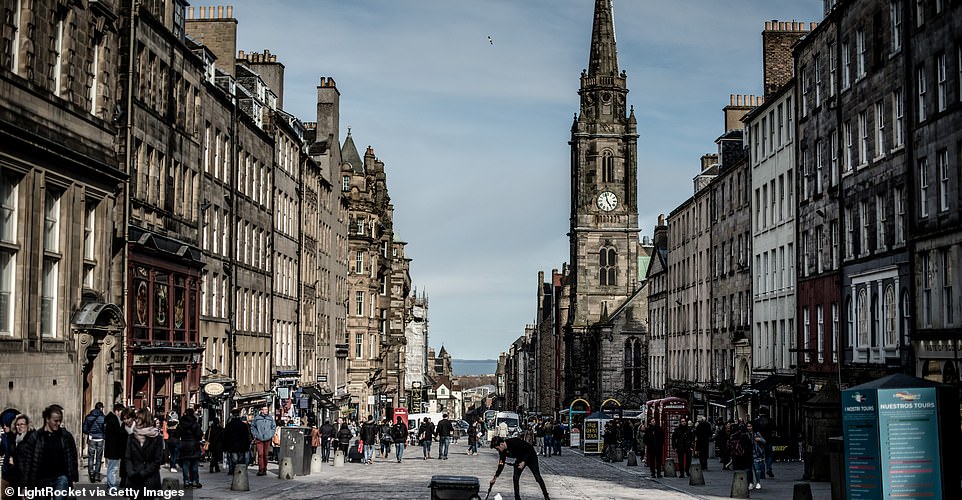 Edinburgh popped up on silver screens around the world recently because it was used as a location for Avengers: Infinity War. Pictured is the Royal Mile, where a fight scene between two of the characters was filmed 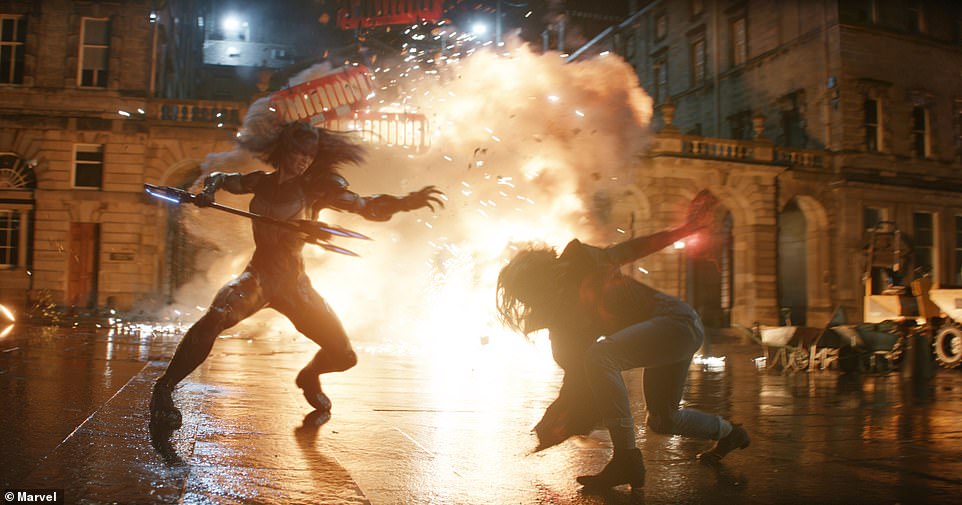 But for box-office hit Avengers: Infinity War, Edinburgh steps into the limelight as the home of characters Wanda Maximoff (Elizabeth Olsen) and Vision (Paul Bettany).

Fifteen per cent of respondents said in the survey that it was top of their movie-location wish list.

Ashdown Forest in Sussex is where author A.A. Milne first got the inspiration for his series of books about Winnie the Pooh 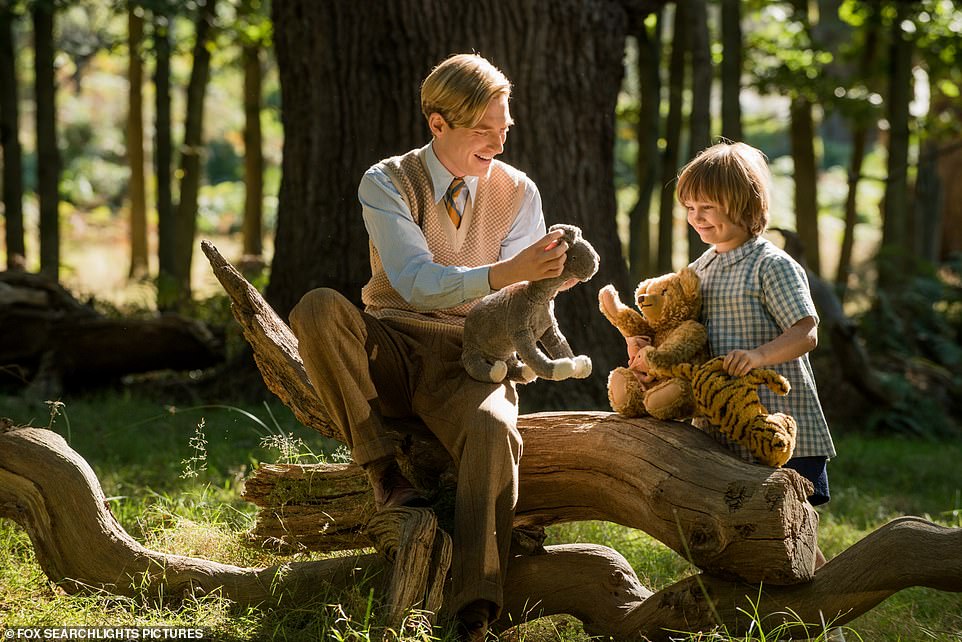 In a film chronicling the lives of Winnie the Pooh creator A.A. Milne and his family, namely his son Christopher Robin, it’s no surprise that Ashdown Forest plays a major role.

The Sussex forest is synonymous with the Winnie the Pooh stories, being the real life ‘Hundred Acre Wood’.

It’s here that A.A. Milne drew inspiration for the books, after observing his son Christopher Robin and the many adventures he would have there with his toys. 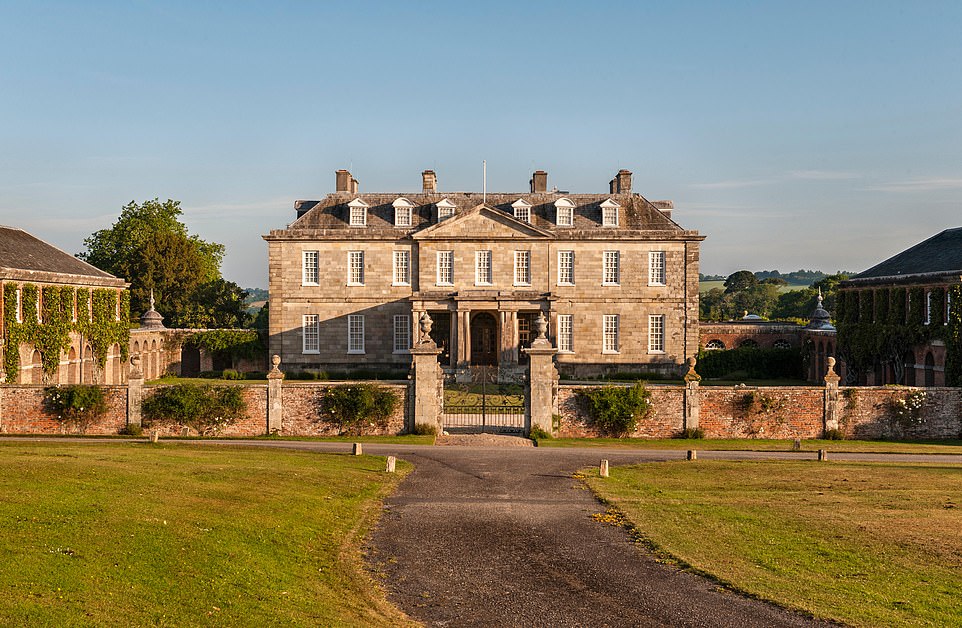 The National Trust property Antony House, in Cornwall, is where the bulk of Tim Burton’s 2010 adaptation of Alice in Wonderland was shot 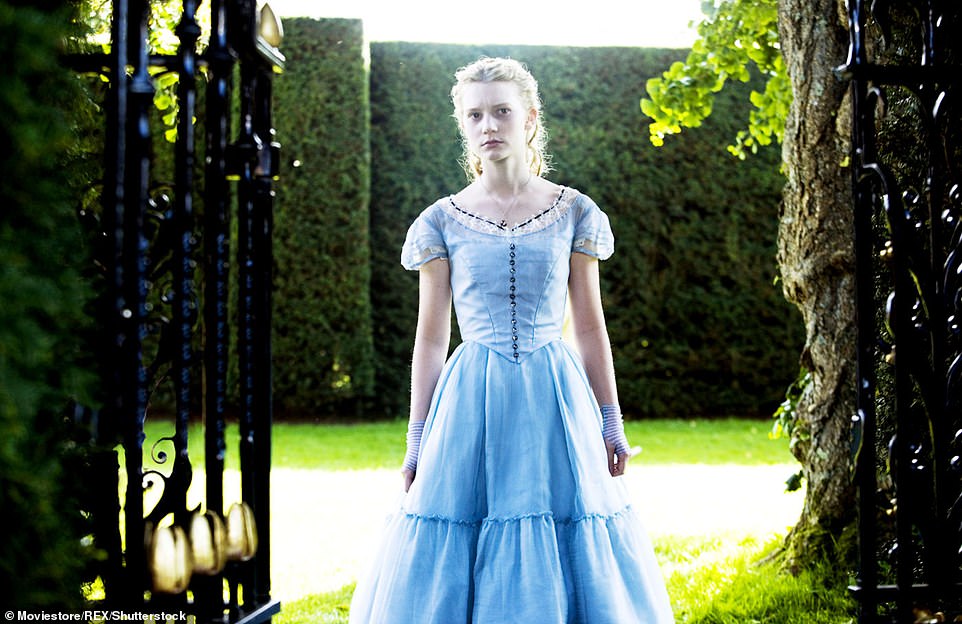 It’s not hard to see why Antony House in Cornwall was chosen by Tim Burton to be the location at the core of his 2010 adaptation of the much-loved Alice in Wonderland.

Nine years on from the release, it’s now the perfect place to visit for any fan of the film or story, as this enchanting National Trust property embraces its recent history in full.

Its grounds feature a ‘larger-than-life caterpillar smoking a hookah pipe’ and a rabbit hole that leads to an oversized garden. 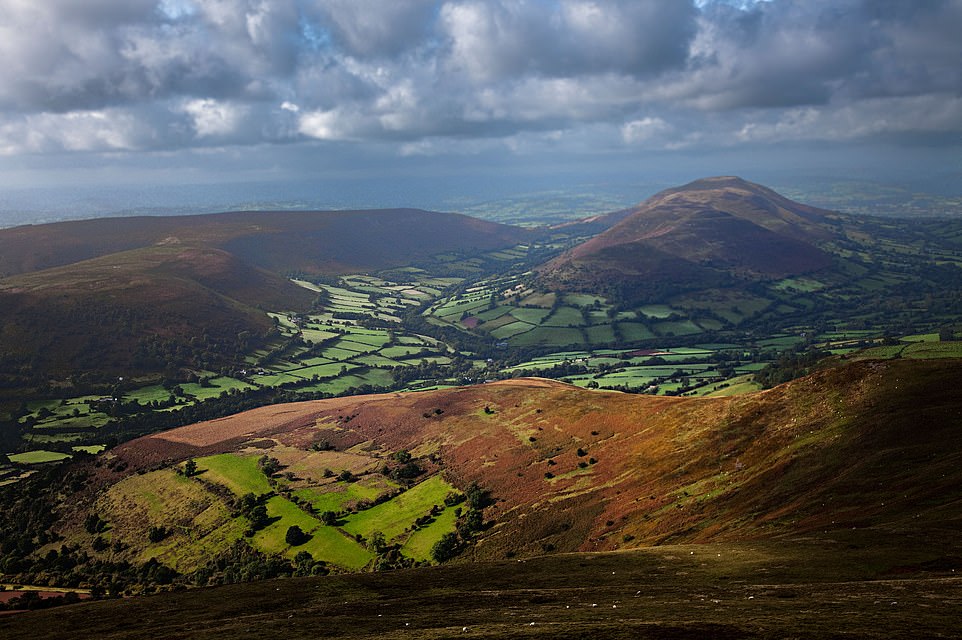 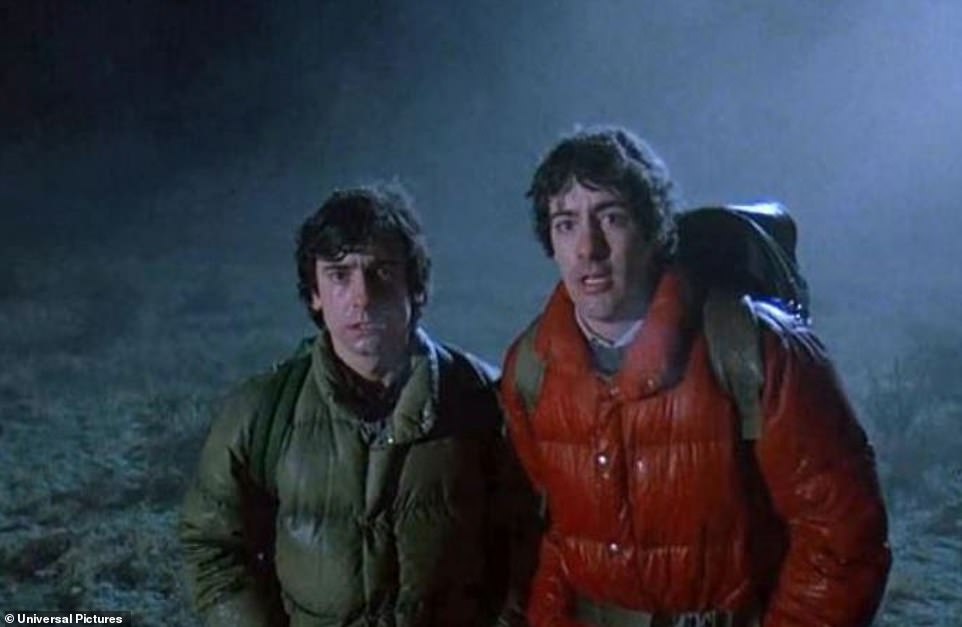 At the start of An American Werewold in Paris, viewers are led to believe the two main characters are hiking on the Yorkshire Moors, but the scenes were actually filmed in Wales

Is it the Black Mountains of the Brecon Beacons or the Yorkshire Moors?

In the cult classic An American Werewolf in London, viewers are led to believe that it’s the Yorkshire Moors that the American hikers are walking around at the start of the film.

But it’s actually the Black Mountains in Wales, which takes fourth place in the top ten. 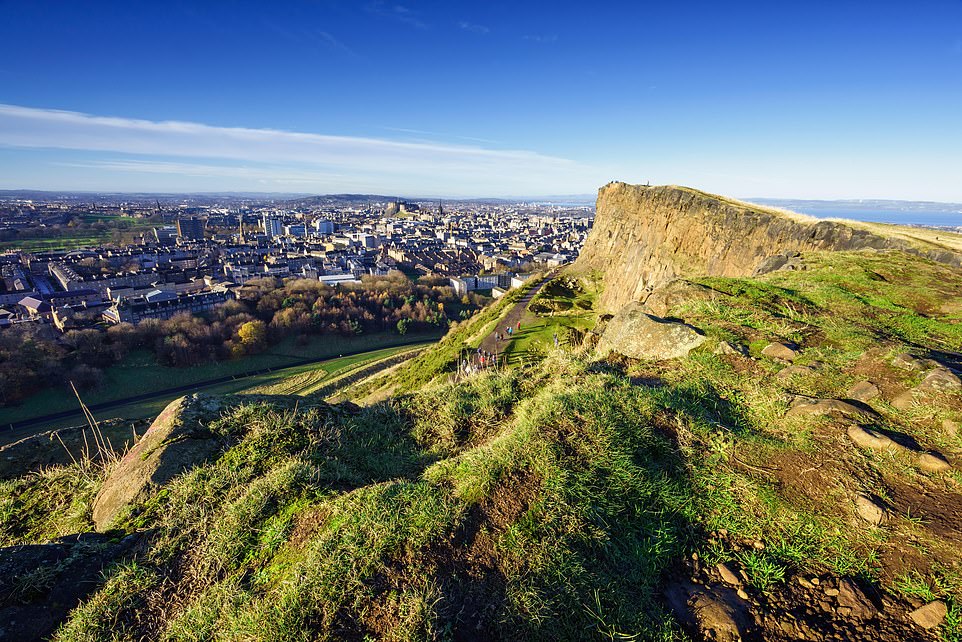 The popular Arthur’s Seat in Edinburgh, which offers stunning views over the city. It plays a central role in the romantic comedy One Day starring Anne Hathaway 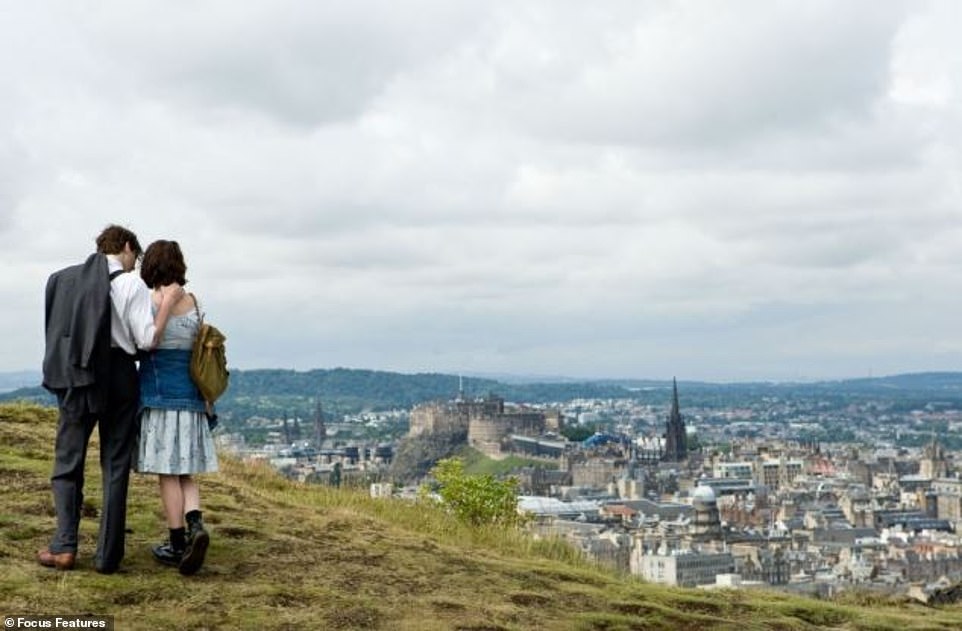 A scene from the film One Day that was shot at the top of Arthur’s Seat in Edinburgh. Pictured are its main stars Anne Hathaway and Jim Sturgess

The city of Edinburgh is back! It plays a central role in the Anne Hathaway fronted romantic comedy One Day, based on the book by David Nicholls.

Arthur’s Seat, just like the landmark in real life, is one of the movie’s most memorable features.

Overlooking the city itself, Arthur’s Seat is one of the most popular attractions in Edinburgh, and allows visitors to retrace the footsteps of the film’s characters, Dexter and Emma. 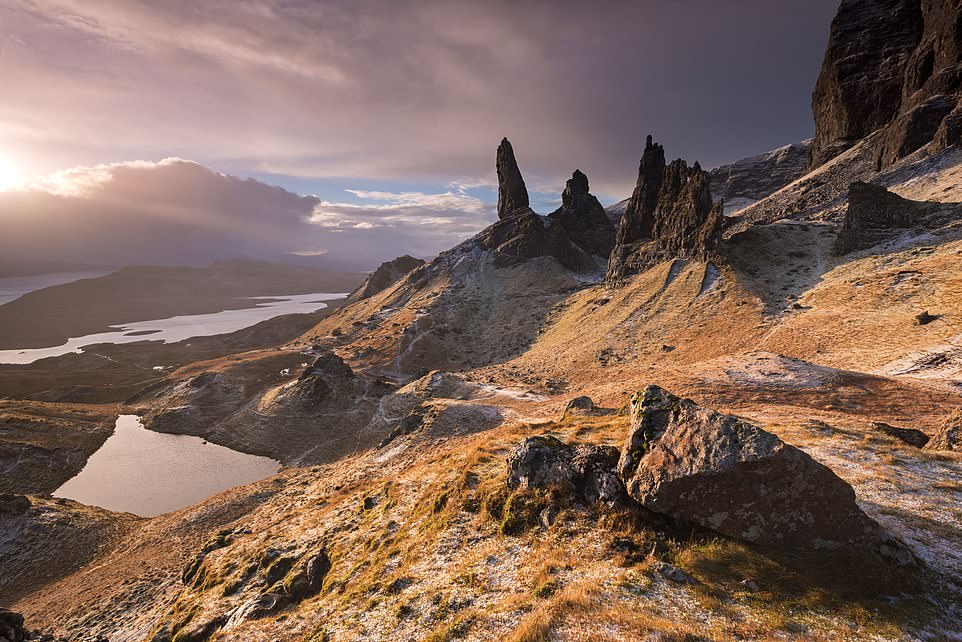 The Isle of Skye plays a starring role in the 1973 cult movie The Wicker Man, starring Edward Woodward 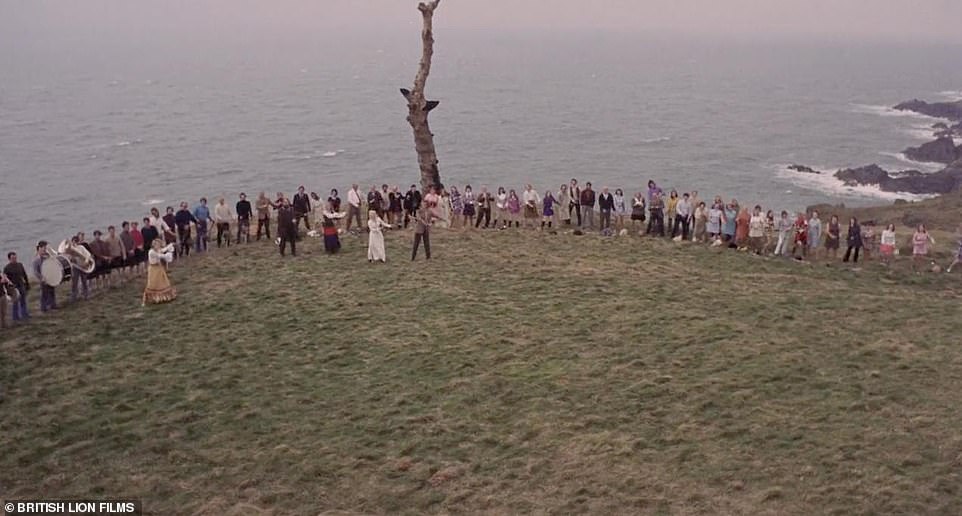 A scene from the 1973 movie The Wicker Man, an unsettling movie shot in a stunning location

The dramatic scenery of the Isle of Skye in Scotland is made for film, with its craggy rocks leading out to a backdrop of rolling green hills and the coastline.

The location scout for 1973’s The Wicker Man certainly thought so, as most of the movie’s opening scenes were filmed there.

And whether it’s a result of the film or word of mouth about the incredible scenery, the Isle of Skye came second in the list. 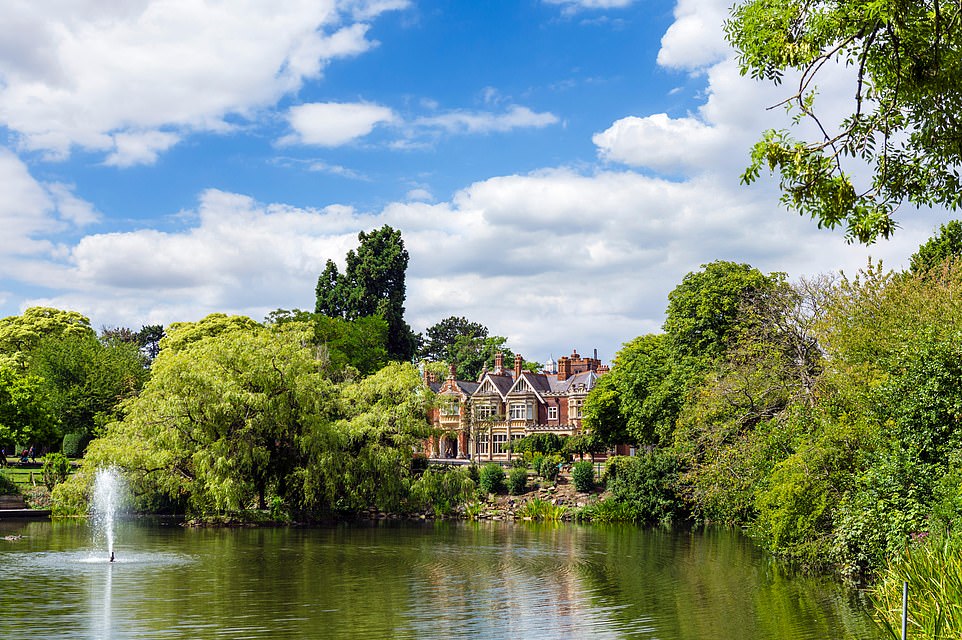 The film location that Brits want to visit the most is Bletchley Park in Buckinghamshire, the former top-secret home of the UK’s World War Two codebreakers 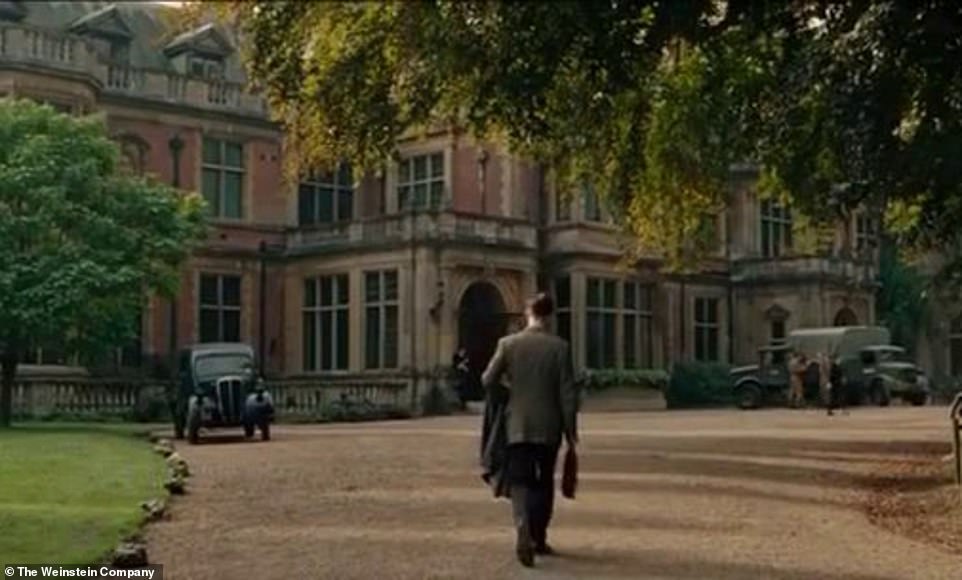 Bletchley Park features in many of the scenes of The Imitation Game, starring Benedict Cumberbatch, pictured, as Alan Turing. It was Turing that led the team that cracked Germany’s Enigma messaging machine

So it seems only right that 2014’s The Imitation Game was filmed there.

It stars Benedict Cumberbatch as one of the most famous code breakers, Alan Turing, who led the team that cracked Germany’s Enigma messaging machine.

The park is now a heritage attraction that is open to the public and takes the No1 spot.