The delights of a Thai family rainforest safari (and discovering that life in the jungle is refreshingly light on boring health and safety!)

‘PUT THAT THING DOWN!’ 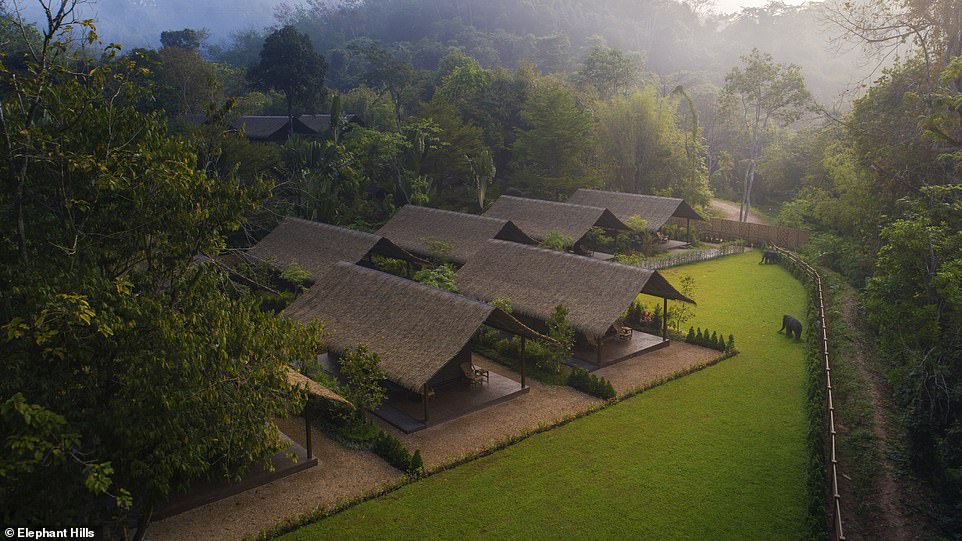 The tented Elephant Camp at Elephant Hills. Fiona says it’s the ideal jungle starter holiday for those who prefer to wake without crippling back pain and like to have somewhere to hang their clothes 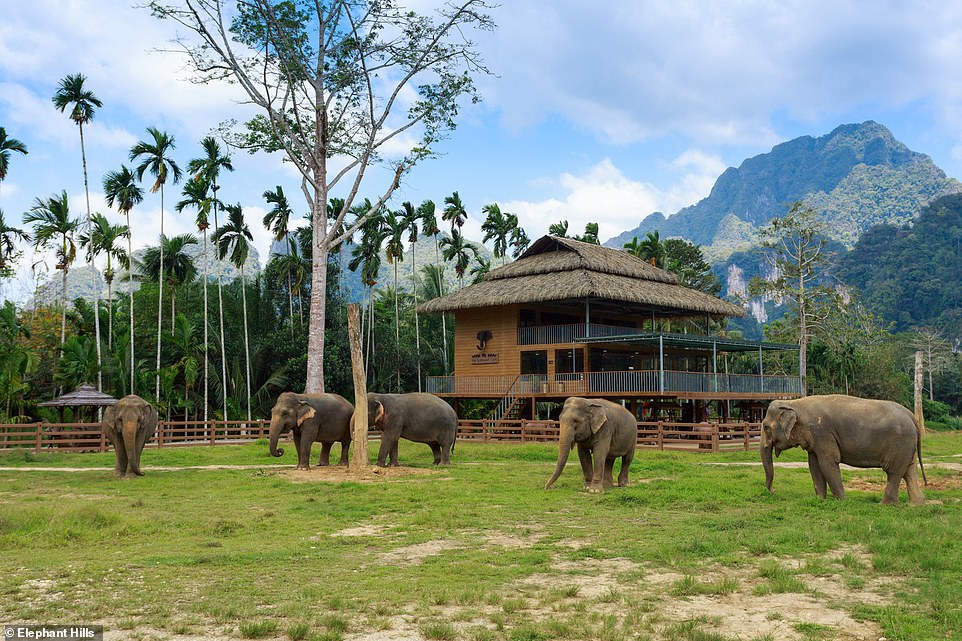 Majestic elephants at the Elephant Hills’ elephant park in southern Thailand, which borders the wilds of Khao Sok National Park

Too late. One clean swipe of the blade and the target was sliced brutally in two. A seasoned executioner would have done no better. I thought I was going to faint.

‘Goodness,’ said Evie, 12, startled by her own force. ‘Who knew I could be so aggressive with a pineapple?’

More to the point, who knew my three children would be wielding machetes on the first day of our family holiday? Parental fail, tick.

For here we were, in the jungle of southern Thailand, vigorously chopping lunch for a herd of elephants who were keenly watching our every move. And jungle life is nothing if not refreshingly light on boring health and safety.

Not that Elephant Hills, a comfortable tented safari camp and elephant park bordering the majestic wilds of Khao Sok National Park, gives any cause for concern. Once you’ve got over the machetes.

For with its excellent facilities and welcome home comforts – proper beds are made up daily, towels replaced, and each tent is not only tastefully furnished with colonial touches but comes with a powerful fan (more than can be said for a French Center Parcs in August).

It’s the ideal jungle starter holiday for those who prefer to wake without crippling back pain and, yes, while we’re at it, like to have somewhere to hang their clothes.

But step outside the camp’s inviting central refectory, complete with gift shop and bar, and enough swamps, snakes and general jungle action awaits to excite any young explorer. 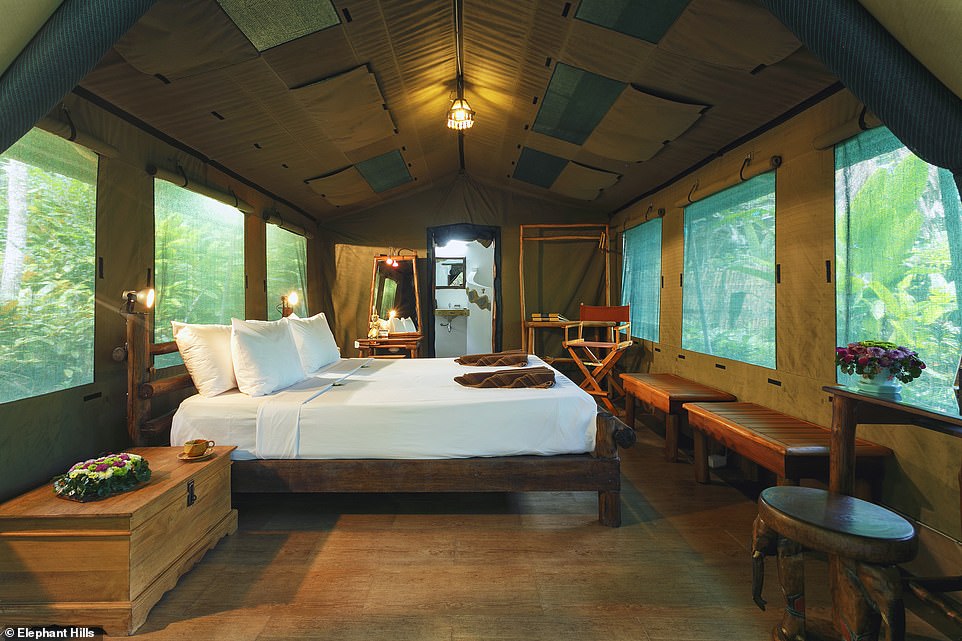 One of the luxury tents at Elephant Hills. The tents are tastefully furnished with colonial touches and have proper beds that are made up daily, says Fiona 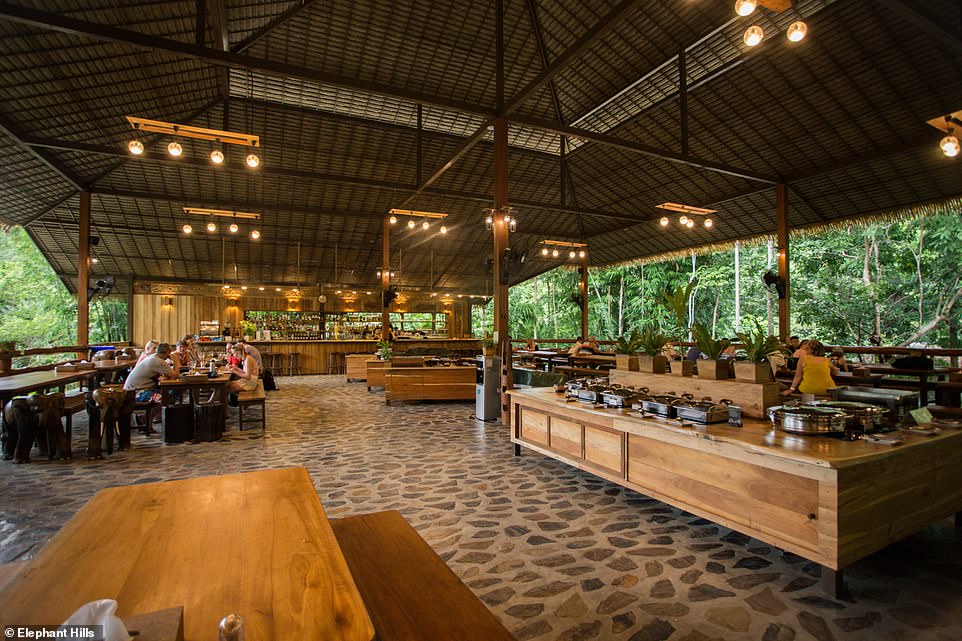 The restaurant at Elephant Hills, where guests can enjoy lashings of Thai curry and children can help themselves to ice cream 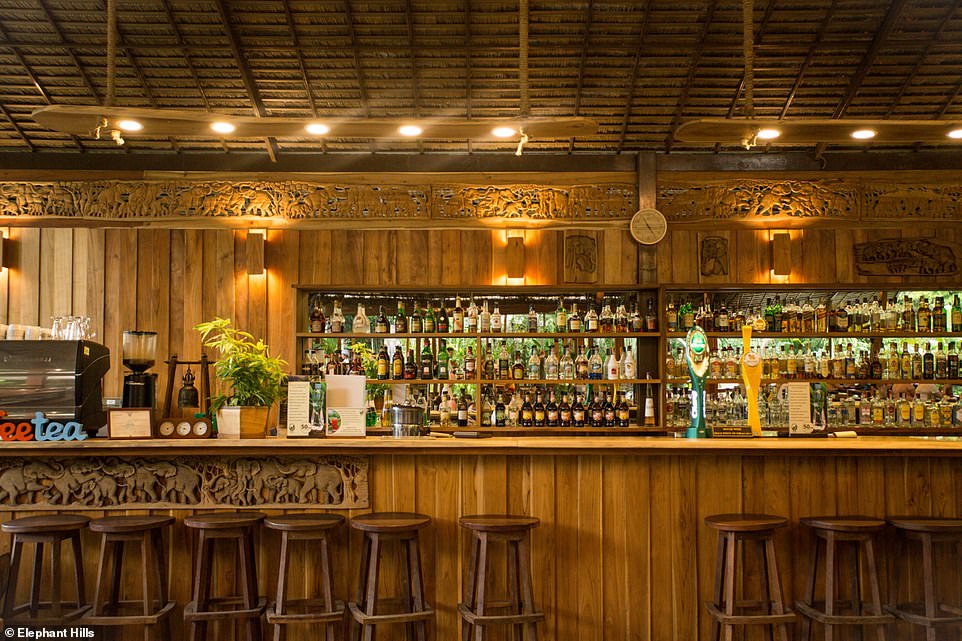 The camp’s central refectory comes complete with a gift shop and bar, pictured. But enough swamps, snakes and general jungle action await outside to excite any young explorer

Think Jumanji, but with charming, endlessly helpful guides instead of man-eating rhinos.

We’d opted for the four-day rainforest nature safari, attracted by an itinerary that couldn’t be further removed from our everyday lives – kayaking through mangrove channels, trekking through the rainforest, swimming in lakes and swinging from lianas (Tarzan’s favourite mode of transport).

But from the moment we arrived and changed into our oddly stylish khaki ranger shirts – Yogi Bear’s nemesis does Autumn/Winter 2019 – there was little doubt as to the main draw. Elephants. Lots of them. All wanting lunch and a bath.

There’s nothing like having the contents of your hand inhaled by the warm suction of a six-foot trunk to make you realise you’re on the other side of the world. 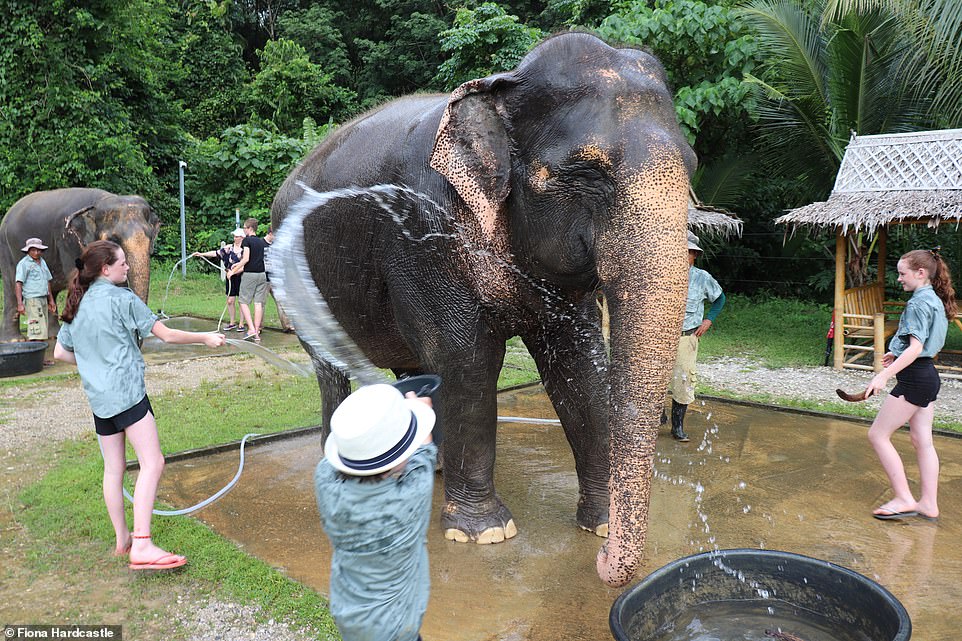 Fiona’s three children Evie, Rose and Felix give a playful elephant a dousing with water during bath time 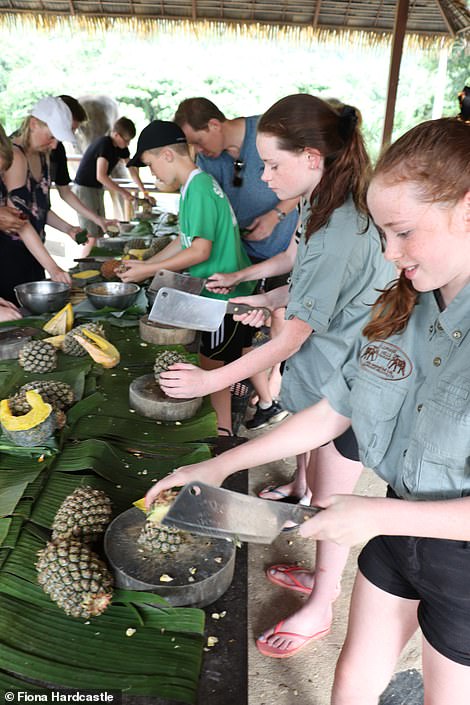 The children get to work with their machetes, chopping pineapple to feed to the elephants

And as we delivered our freshly prepared, seven-course, tasting menus – can I interest madam in a tamarind energy ball wrapped in bamboo leaf? – it was humbling to be part of the care and attention lavished on these noble creatures by their devoted staff.

Humbling and, as bath time would prove, hilarious. For there are few things an elephant likes more than a drenching – or a child enjoys more than soaking their siblings.

No sooner had Rose, 13, grabbed hold of the hose than Felix, seven, armed himself with a bucket. And as the pair positioned themselves for an almighty water fight, Nellie in the middle got a dousing she is unlikely to forget.

Evie, mercifully now in possession of a blunter tool, was happy to take on the role of exfoliator-in-chief, rhythmically rubbing the trunk with the husk of a coconut fibre, as she hummed along to her strokes. Did we imagine it, or was our eight-foot bather swaying in time?

Now completely wet through, what harm could a little monsoon do? At least that’s what we told ourselves as the heavens opened while our beaming guide, Nong, led us to the riverbank for our next adventure – a canoe safari down the Sok.

Our cagoules may have been zipped to the nose, but all eyes lit up as she pointed out the first of many exotic creatures taking refuge in the undergrowth – a yellow mangrove viper, coiled in a tree above our heads.

Was it still raining? I’d like to say we hadn’t noticed, but by now we were soaked to the skin and my husband and I were desperate for a hot shower, stiff drink and the sound of The Gong.

Ah! The Gong! The huge beating bronze heart of the camp, the primordial chimes of which meant only one thing: food’s up – come and get it. 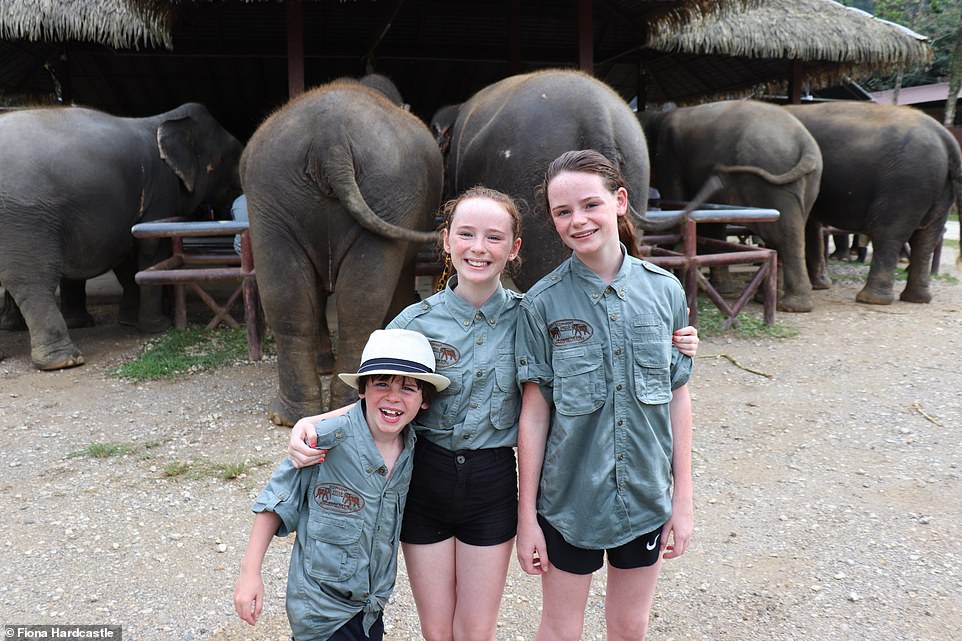 Fiona’s children in their stylish khaki ranger shirts at Elephant Hills. She says that the itineraries there may be packed, but somehow there is still the delicious feeling of being let loose 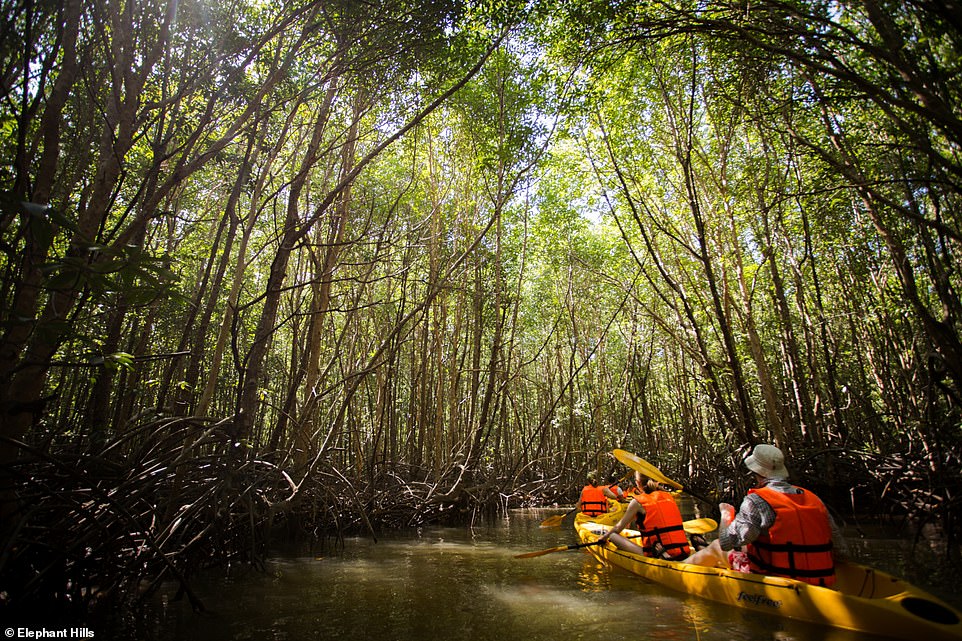 Activities on offer include kayaking through mangrove channels, pictured, trekking through the rainforest, swimming in lakes and swinging from lianas (Tarzan’s favourite mode of transport) 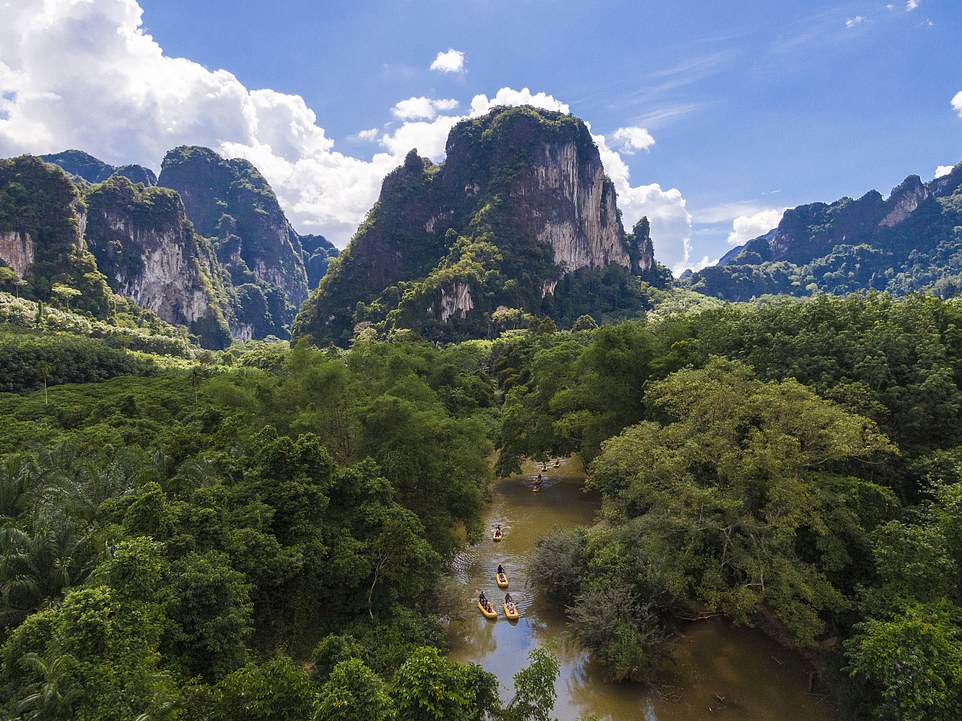 Fiona and her brood went on a canoe safari down the Sok River, amid pristine vegetation (pictured)

Never mind Pavlov’s Dog. There wasn’t a soul above sprinting to the ample buffet the moment the mallet struck.

Lashings of Thai curry and a few ice-cold beers later, and families were soon swapping stories while children darted around helping themselves to ice-cream, exhilarated with freedom.

That’s the beauty of Elephant Hills – the itineraries may be packed and the organisation slick, but somehow there is still the delicious feeling of being let loose. 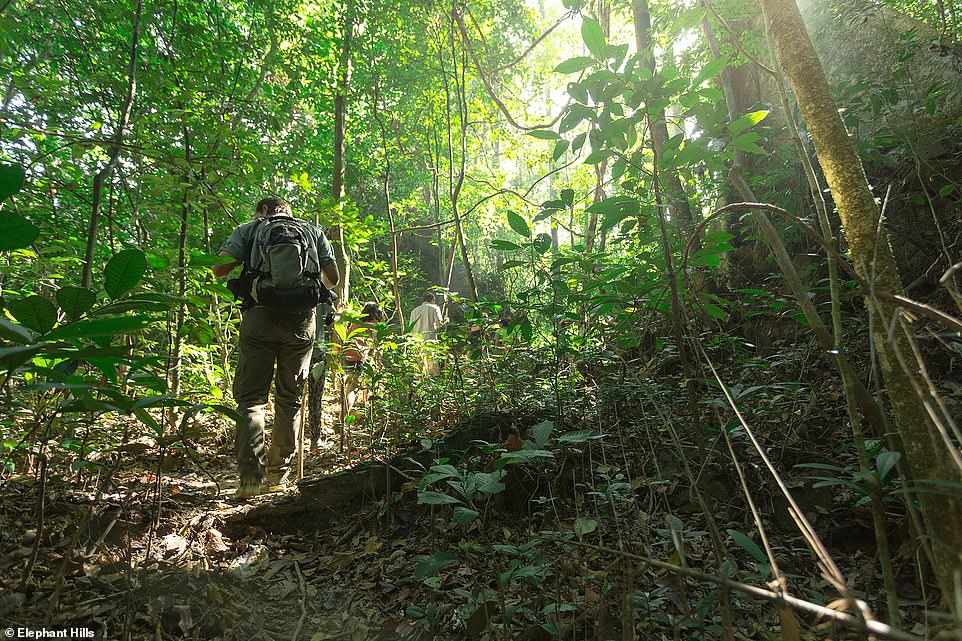 Guests at Elephant Hills can enjoy treks through the rainforest. On their trek, Fiona and her family were led by guide Nong, who was armed with bamboo walking sticks and an encyclopedic knowledge of flora and fauna

Prices for Rainforest Nature Safari (three nights and four days) are from £627 per adult. Children go free during months of May, June and September. For further details, visit elephanthills.com or call 00 66 7638 1703.

Whether it’s attempting to steer a kayak successfully into a Mangrove channel (next time, Evie, you’re in charge), jumping from a pontoon into a shoal of glistening koi carp (there will be no next time), or feasting on prawns the size of your fist on a Classical Burmese Junk (at least I managed that), few family holidays have notched up so many new experiences. Or generated so many tales to tell.

Our last day had come too soon – but what better way to spend it than trekking through the rainforest with Nong, armed with bamboo walking sticks and her encyclopedic knowledge of flora and fauna.

Taking a blade to a rubber tree, she released its milky sap. Who could name any products that come from its bark?

‘Yes!’, she replied, delighted with her eager troupe. ‘And what about something for the gentlemen?’

Cue child confusion and an awkward parental pause. ‘That’s right!’ she continued into the silence. ‘Belts!’

It could have been the jungle mist, but I’m sure there was a twinkle in her eye.

Back to base and onward transfers which, due to the isolation of the camp, are included in the cost of the trip.

Time for a bit of beach was the verdict of most departing guests, ready to swap muddy walking boots and mountain mists for flip flops and white sands.

And while three nights under canvas was definitely a personal best, it was with a heavy heart that I left that gong.