Midnight storms, an angry Etna and Ronaldo the horse frolicking in the snow: Incredible entries in the open competition of the 2022 Sony World Photography Awards

The category winners and shortlisted entries for the open competition of the 2022 Sony World Photography Awards have been revealed – and they are absolutely stunning.

There’s a huge variety of themes and locations in this year’s selection, from the hauntingly beautiful shot of the World War I tracks in the Pasubio Mountains in Italy to a joyful picture of Ronaldo the horse frolicking in the snow in Germany.

Categories include Travel, Motion, Natural World & Wildlife, and Landscape, and they’re all jam-packed with stellar entries.

Out of 170,000 images entered, 100 photographers from around the world were shortlisted in addition to ten category winners.

The overall winner of the open competition will be announced on April 12 and select work by winners and shortlisted entries will be exhibited as part of the Sony World Photography Awards at Somerset House in London from April 13 to May 2. 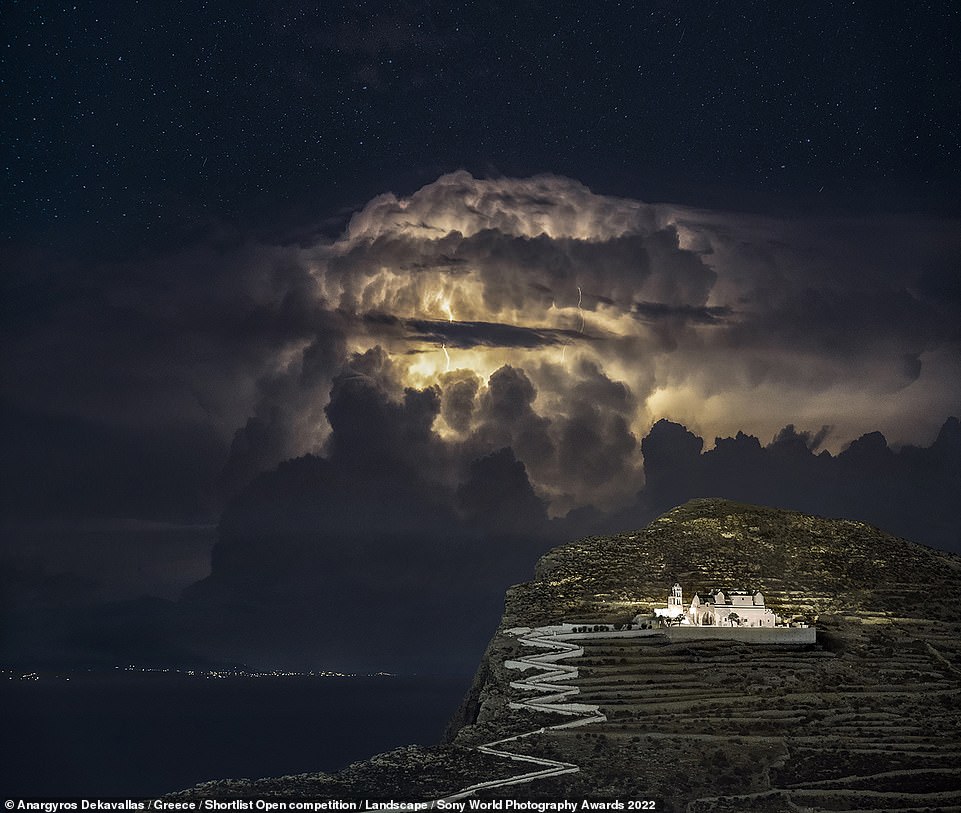 This powerful picture captures brooding midnight storms over the Aegean Sea, taken from a cliff above Chora on Folegandros island. ‘I was admiring the amazing powers of nature,’ says photographer Anargyros Dekavallas from Greece, whose image was shortlisted in the Landscape category 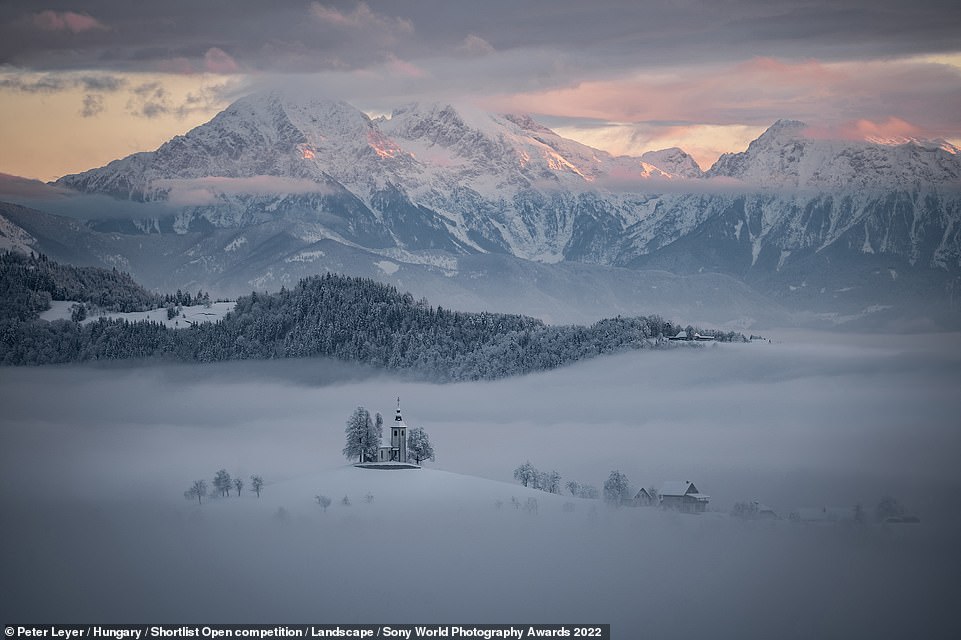 Peter Leyer from Hungary submitted this majestic mountain landscape image, titled ‘Foggy winter sunrise at St. Thomas Church’. ‘I wanted to capture the white-clad landscape with the mountains lit by the first rays of sun in the background,’ Leyer says of the stunning entry, shortlisted in the Landscape category 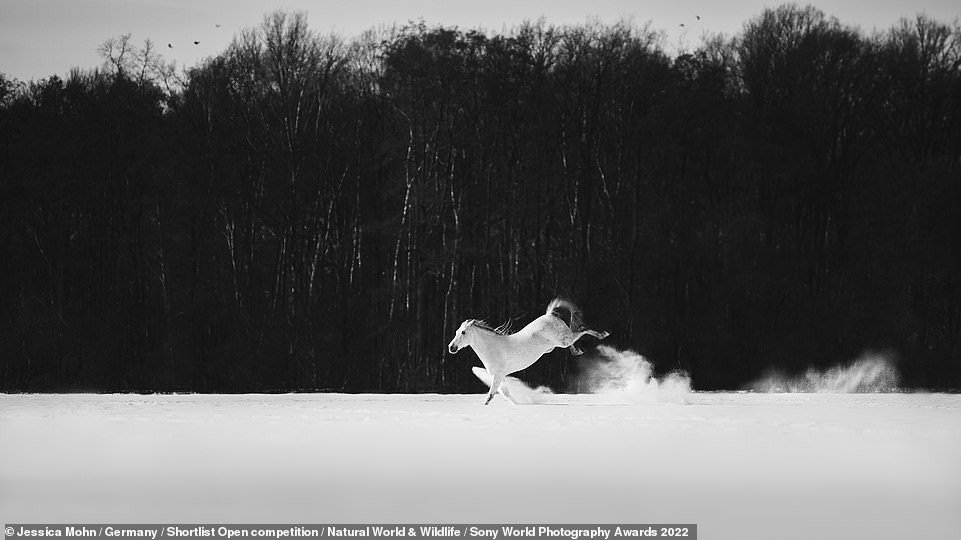 Apparently a big fan of snow days, Ronaldo the horse is captured here galloping through knee-high snow. ‘I want to communicate a feeling of freedom and power,’ photographer Jessica Mohn from Germany says of her snap, shortlisted in the Natural World & Wildlife category and taken in February 2021 in her home country. She adds: ‘We haven’t had so much snow in years, making it quite special to experience his zest for life in this magical season’ 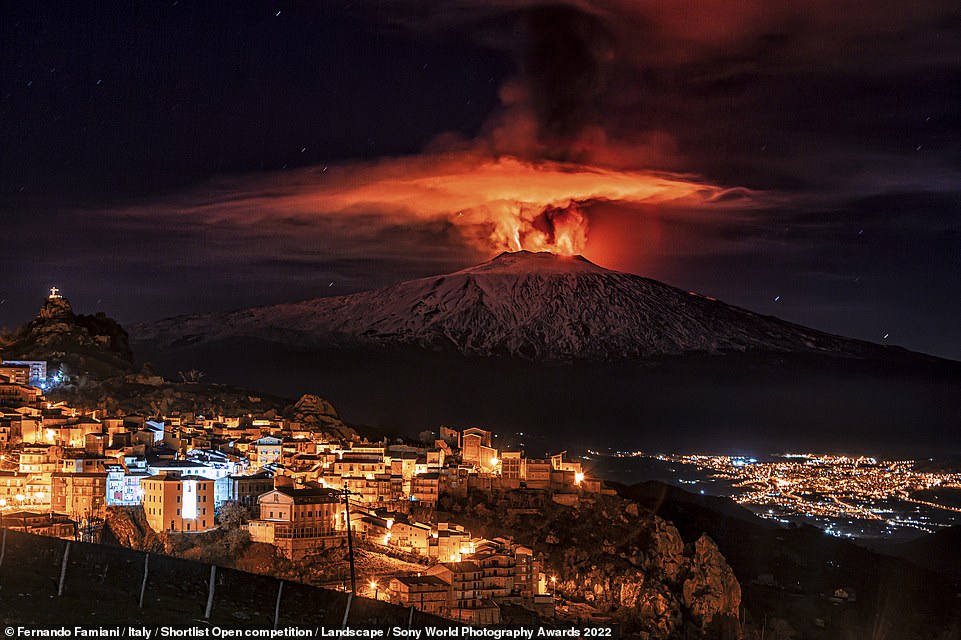 This night eruption of Sicily’s Etna volcano was captured from San Teodoro at 2am, and shows three vents ejecting lava up to 1,000 metres (3,280ft) into the air while the twinkling town of Cesaro watches on. Italian photographer Fernando Famiani was shortlisted in the Landscape category for this perfectly-timed photo 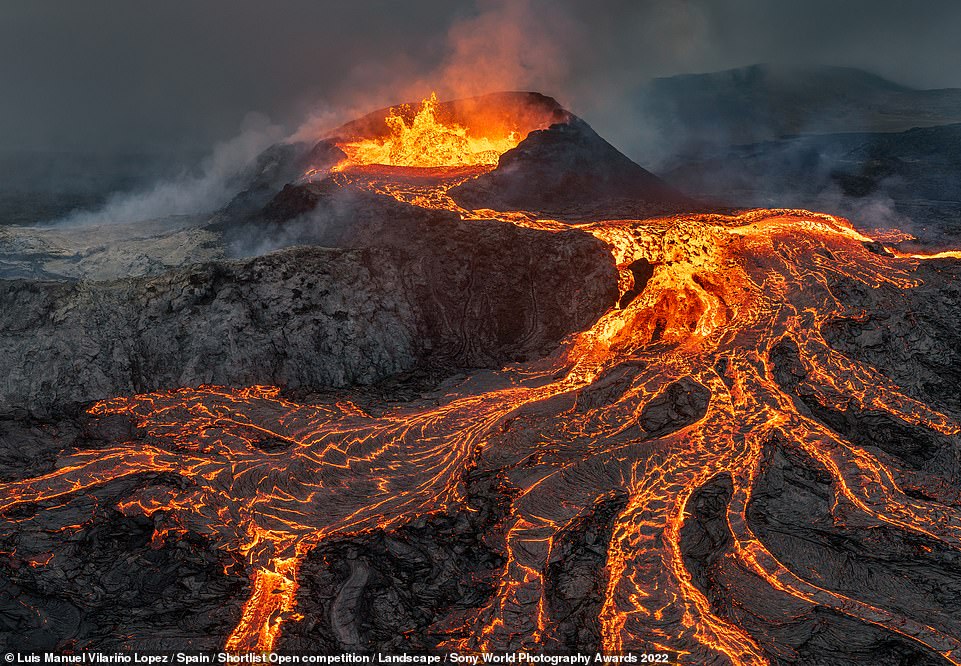 Thankfully, Spanish photographer Luis Manuel Vilarino Lopez did not have to wade through lava for this shot, shortlisted in the Landscape category, in which magma splutters forth from Iceland’s Geldingadalir volcano. Instead, he flew his drone ‘blindly’ through the clouds and heavy rain. ‘When I reached the crater the lava was emerging with unusual force, scattering the incandescent rock like oil on a canvas,’ he reveals 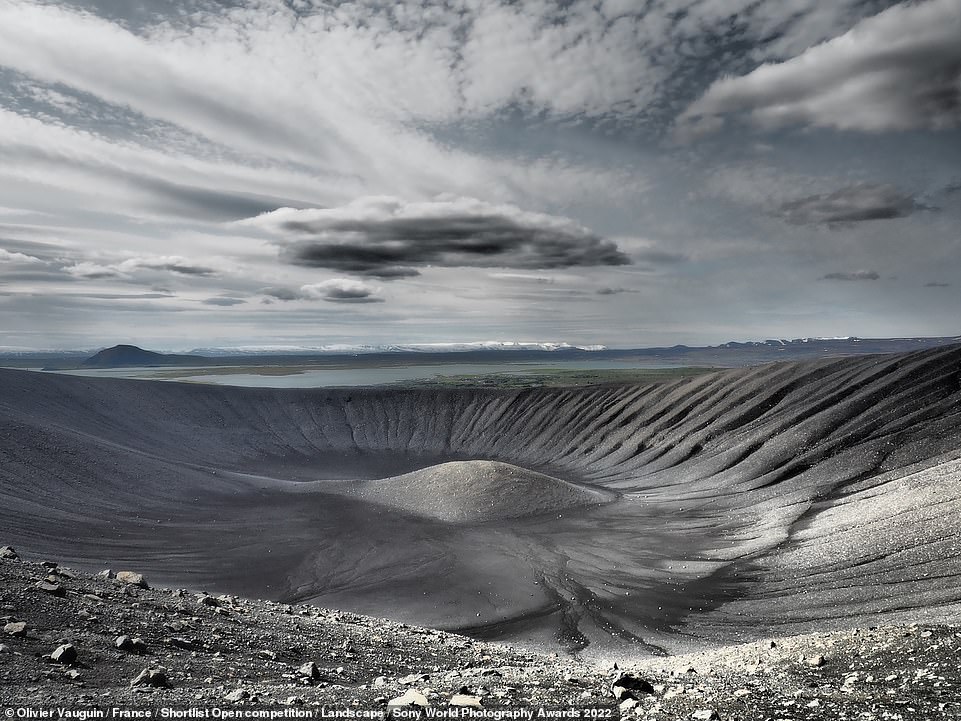 This captivating image, which was shortlisted in the Landscape category, shows the eerie volcanic formations in the north of Iceland. ‘The colour and the light was great, and I just tried to capture the moment with the emotion that I had,’ recalls French photographer Olivier Vauguin 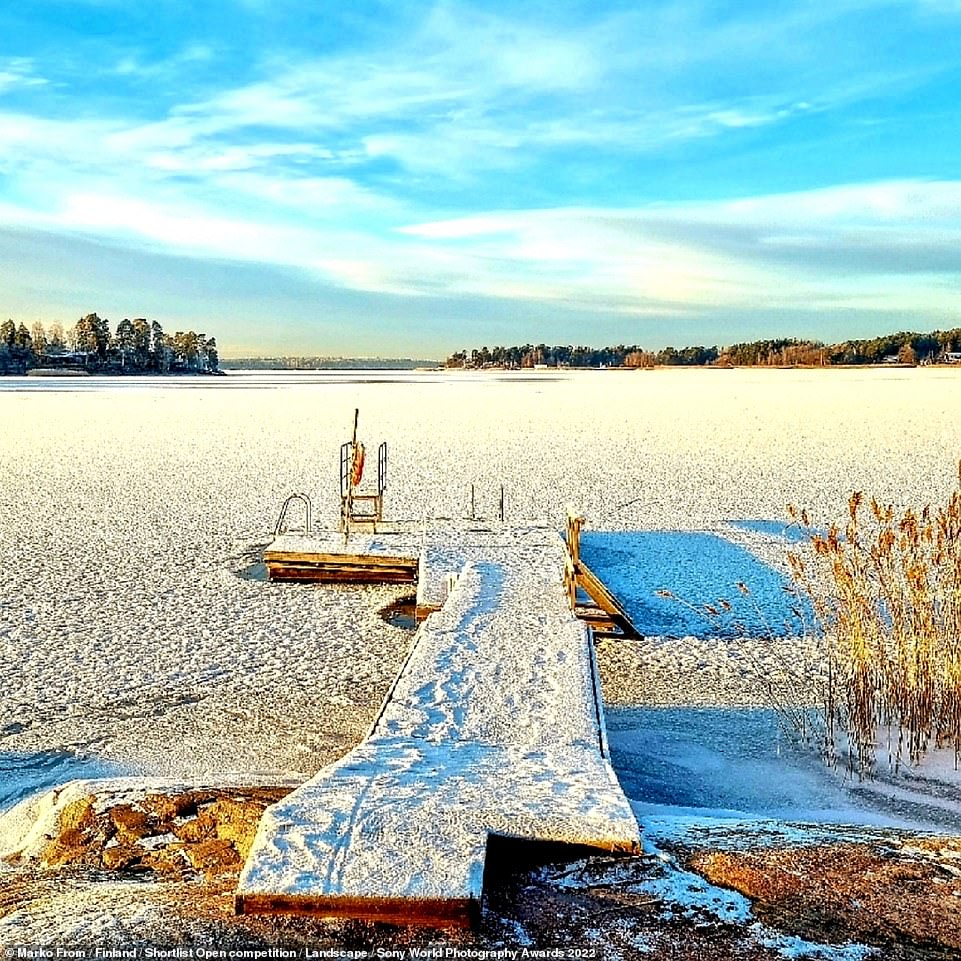 ‘Amazing View’ is a fitting title for this snow-dusted scene, which Finnish photographer Marko From took in Naantali, Finland. A frosty jetty draws the eye out over the frozen lake, a stunning vista that saw the picture shortlisted in the Landscape category 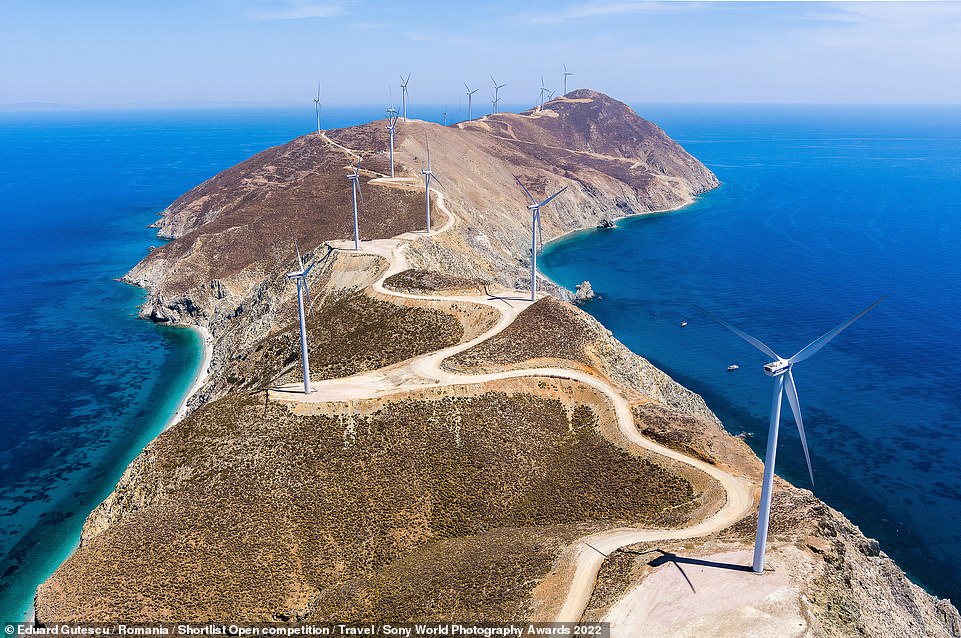 A winding path leads the viewer’s eye along an idyllic-looking cape in Greece, but beyond the picturesque coastline, the stars of the photo for Romanian photographer Eduard Gutescu are the wind turbines that are scattered along it. Entitled ‘Sustainable Energy’, the thought-provoking photograph was shortlisted in the Travel category 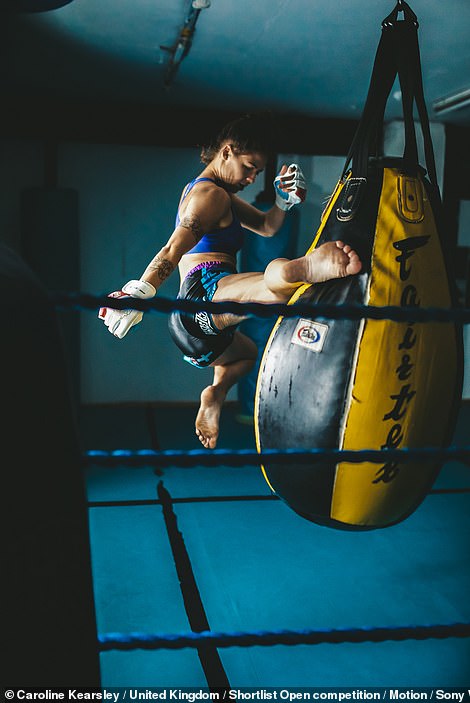 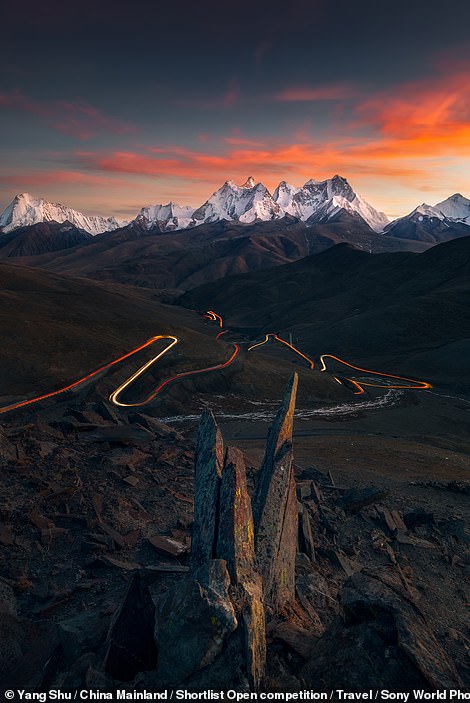 LEFT: You can almost hear the impact of the Muay Thai boxer’s kick in this photo as it strikes the battered punching bag. Caroline Kearsley from the United Kingdom is to thank for this photo of WBC England Muay Thai Champion Amber Kitchen, which was shortlisted in the Motion category. RIGHT: ‘The Mondala Pass is 5,363 metres [17,595ft] above sea level, and is the only way to the Kula Kangri mountain,’ says the Travel-category-shortlisted-photographer Yang Shu from China. ‘In December, the temperature dropped to -20C. I climbed to an altitude of about 5,500 metres to find this angle’ 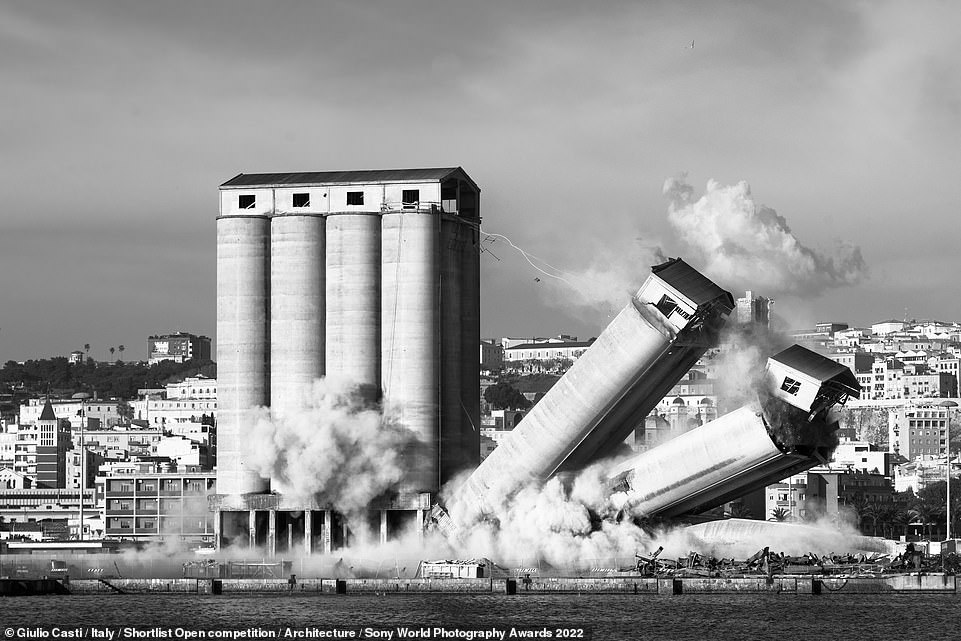 This is one of the Architecture category’s most impactful shortlisted photos. It was taken by Italian photographer Giulio Casti and shows a ‘landmark’ agricultural silo in the harbour of Sardinia’s capital, Cagliari, being demolished 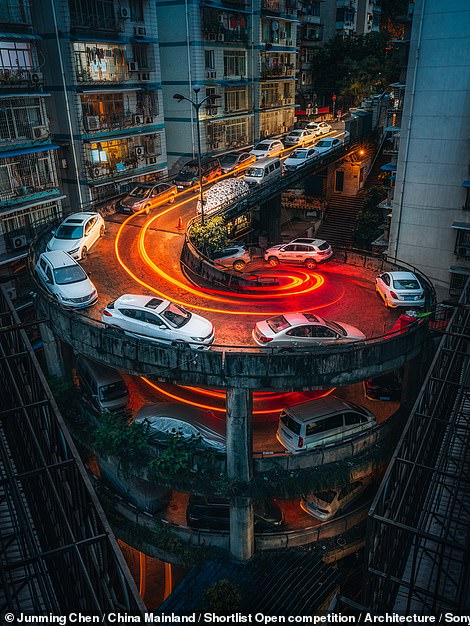 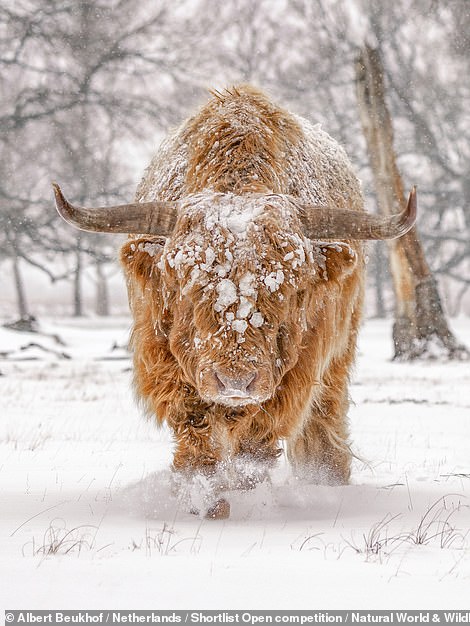 LEFT: Neon flashes and cluttered architecture makes this traffic jam on a tight corkscrew road look like a vision of cities in the future. The Architecture-category-shortlisted photo is in fact an image of Chongqing, by Chinese photographer Junming Chen. RIGHT: The power of this hardy Highland cow, seemingly set to charge right into the lens, was captured by Dutch photographer Albert Beukhof. The daring shot was taken in Deelerwoud in the Netherlands and shortlisted in the Natural World & Wildlife category 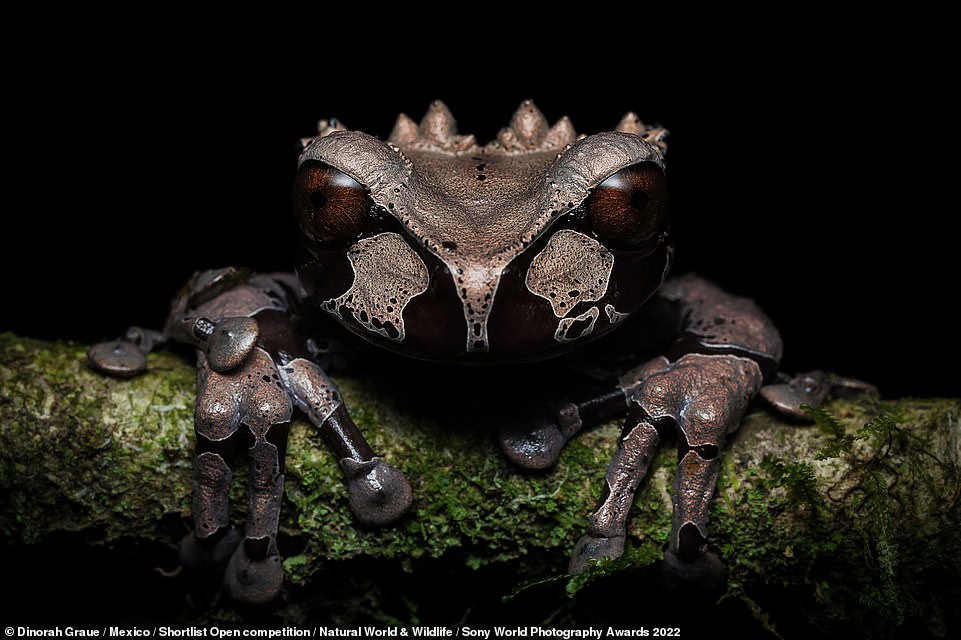 It’s the near-perfect symmetry and breathtaking detail that turns this tree frog into prince charming. ‘If you look closer, it has a beautiful crown,’ notes Mexican photographer Dinorah Graue Obscura, who took this picture, shortlisted in the Natural World & Wildlife category, while on a night walk in Guapiles, Costa Rica 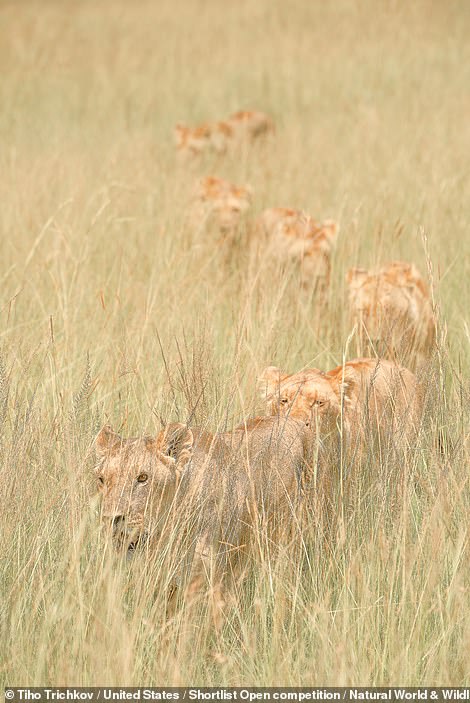 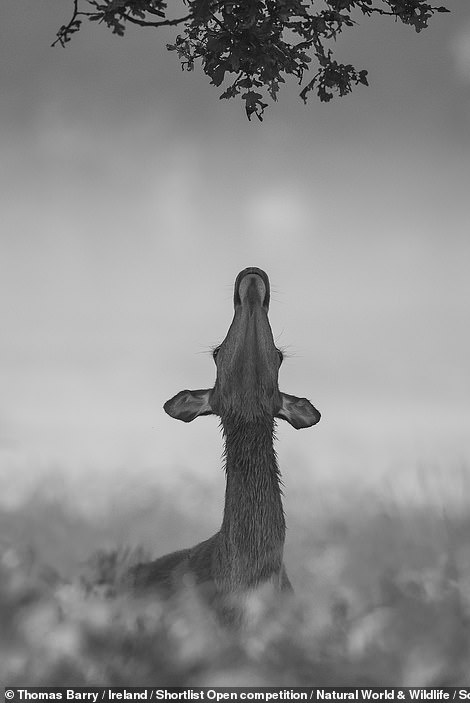 LEFT: This trail of lions, partially hidden by grass as they ventured from their shady hideout, was a ‘magnificent sight to behold’, says American photographer Tiho Trichkov. The picture, shortlisted in the Natural World & Wildlife category, was taken in the Maasai Mara National Reserve in Kenya. RIGHT: This enchanting picture was taken one September morning in Richmond Park in London, where herds of red deer roam freely. It was shortlisted in the Natural World & Wildlife category and taken by Irish photographer Thomas Barry, who admitted that the ambience of the image was helped by the fog 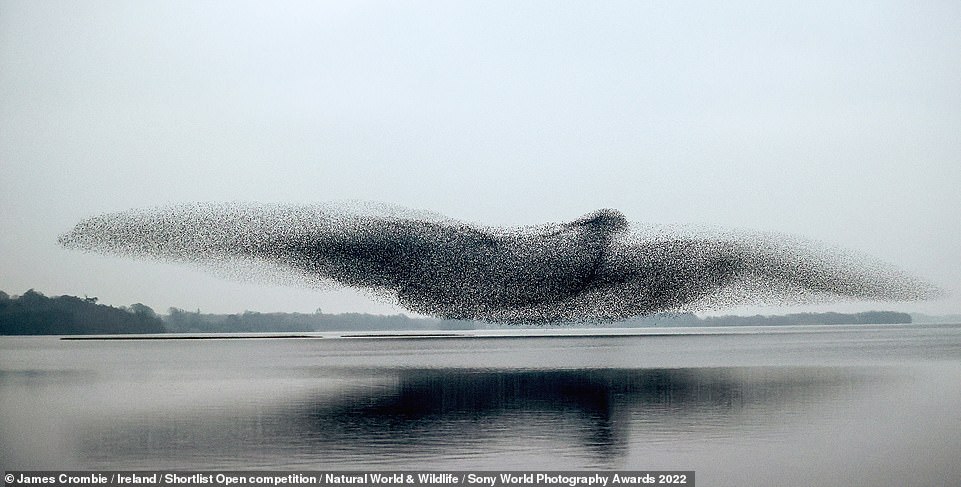 This murmuration – captured at lake Lough Ennell in Country Westmeath, Ireland – looks more like an elegant sculpture of a giant bird than a flock of starlings. It was shortlisted in the Natural World & Wildlife category and taken by Irish photographer James Crombie 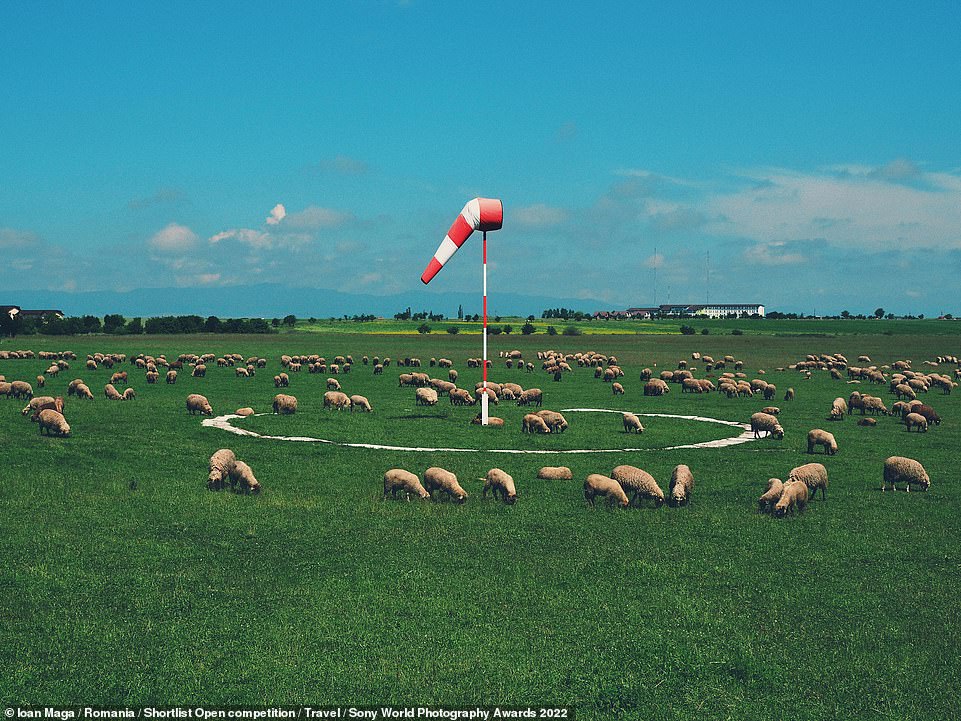 ‘I was wandering near an airfield when I noticed this almost surreal image of sheep pasturing the field,’ says Romanian photographer Ioan Maga of their photo, shortlisted in the Travel category 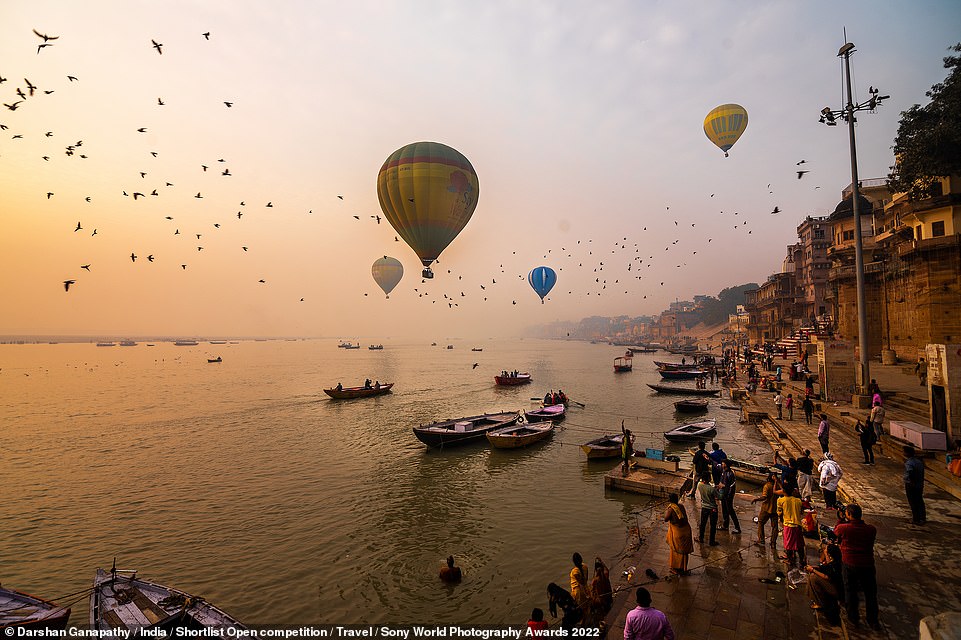 The Varanasi Balloon Festival is a three-day spectacle in Uttar Pradesh, and Indian photographer Darshan Ganapathy has captured the event perfectly. ‘The ghats [steps] of Varanasi and the balloons during the sunrise were mesmerising to watch,’ the photographer says of their picture, shortlisted in the Travel category. ‘The hot air balloons passing through the dim blue sky add vigour to the festival’ 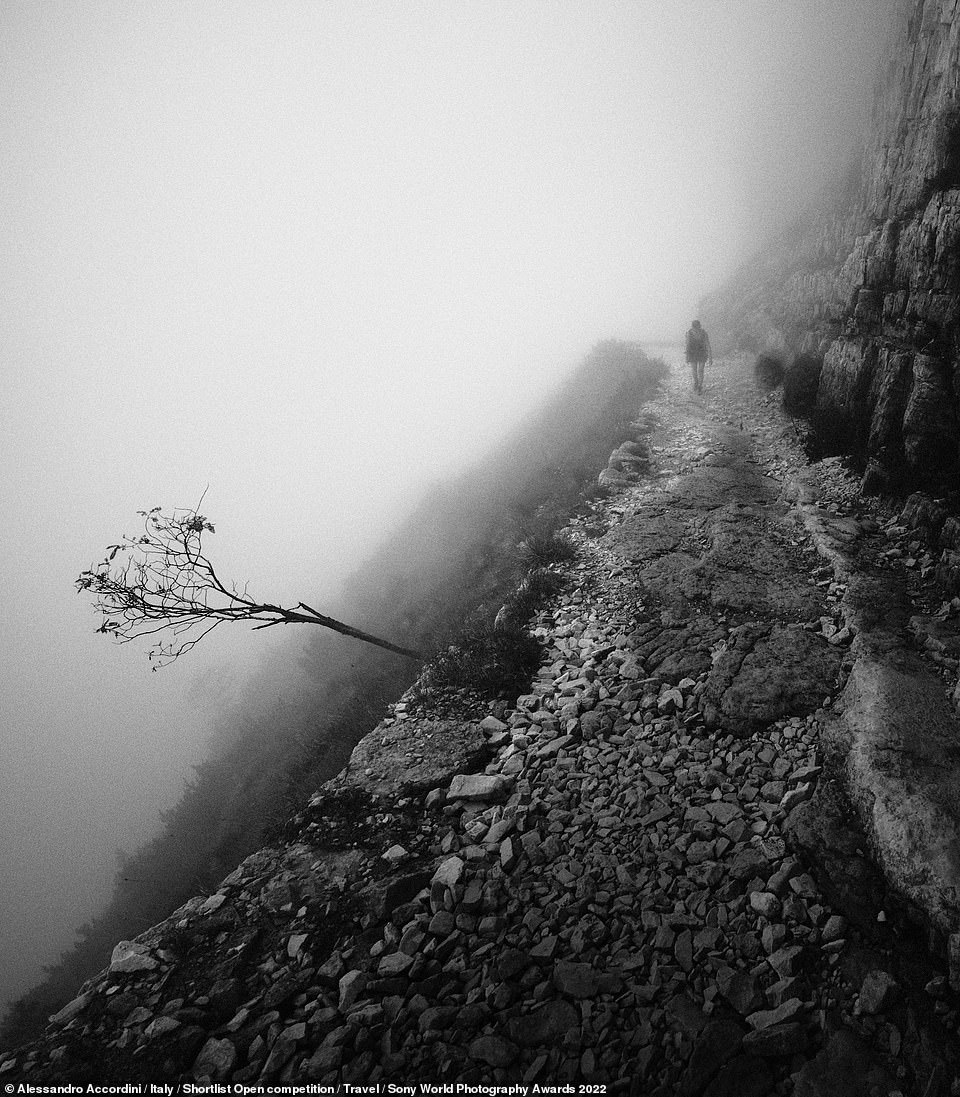 The haunting beauty of this image, with its gnarled tree and figure in the distance disappearing into the fog, echoes the dark past of Pasubio mountains. The group of rugged peaks was the setting for some treacherous World War I battles, and the steep slopes are scarred by trails dating back to that era. Named simply ‘Human Nature’, this picture by Italian photographer Alessandro Accordini was shortlisted for the Travel category 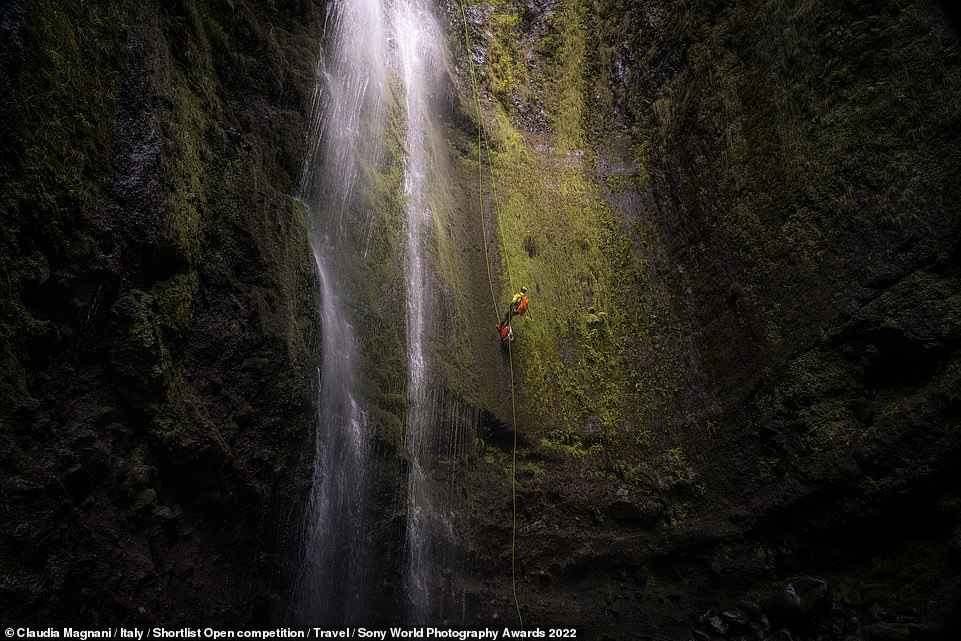 ‘Canyon Views’ is a staggering shortlisted entry in the Travel category, taken by Italian photographer Claudia. It shows ‘one of the most wild canyons on the island of Madeira’, the photographer reveals 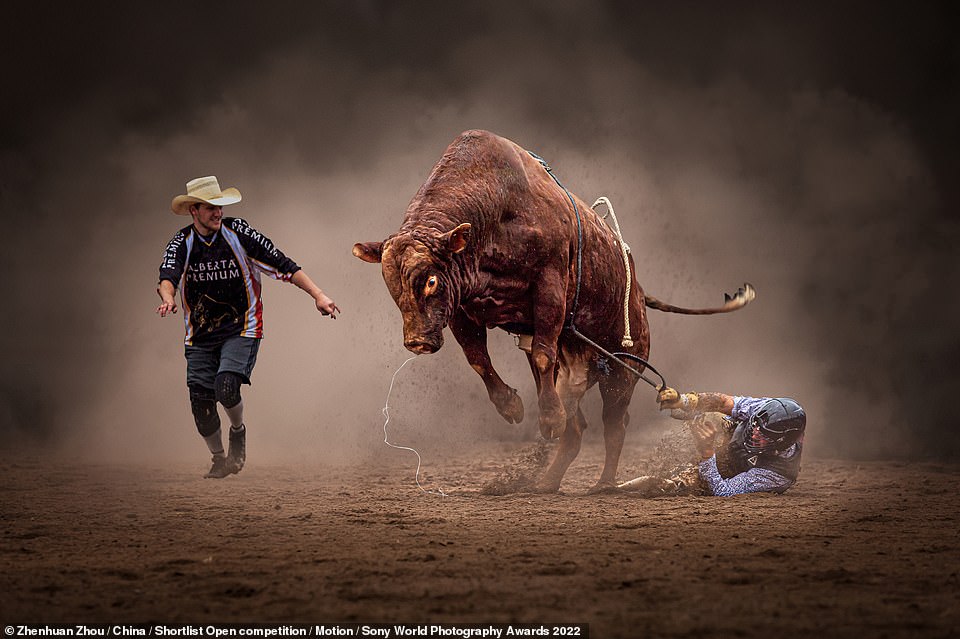 Another incredible shortlisted entry for the Motion category. Here Zhenhuan Zhou from China has captured an intense moment in the rodeo sport of bull riding 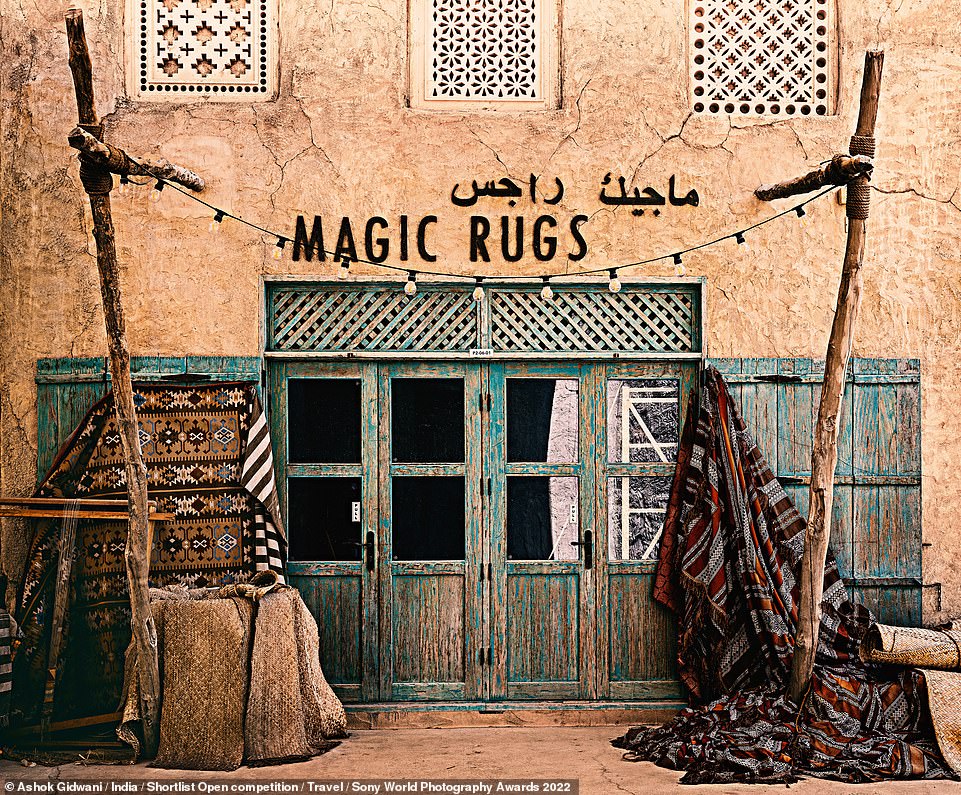 ‘I was always fascinated by rugs: new, old and antique,’ says Indian photographer Ashok Gidwani. It’s no surprise, then, that they were ‘instantly drawn’ to this picture-perfect scene in the Al Seef Souk of Dubai. The picture was shortlisted in the Travel category