Mickey and Minnie were the first to appear, dancing and pumping their fists to music that shook the morning calm in the manicured “town center” of Disneyland Paris. French news crews were assembled, cameras trained on the park’s main gates, waiting to capture the arrival of the first guests. Just after 8:30 a.m., a dozen children associated with a French charity group skipped into the park as a video crew ran alongside them and hundreds of the resort’s “cast members” hooted and sang. Moments later, a full crowd of park-goers streamed through.

“It’s just so nice to be back,” said Tamara Queisser, 24, shouting to be heard over the music and wiping away the tears that were wetting her face mask. She had traveled nearly 400 miles from her home in Germany to attend the reopening of the park, which she said she had visited about 10 ­times before it closed during the pandemic. “It’s unbelievable,” she said, gazing around in her silver-sequined mouse ears. “Disney has been my big love since childhood.”

Disneyland Paris, which has been closed since late October, is once again open for business. The official reopening last week comes as France, the world’s most-visited country before the pandemic, discards many of its remaining Covid-19 restrictions and attempts to revive its tourism sector, which accounted for 7.4 percent of the country’s gross domestic product in 2018. Disneyland Paris — which attracted more than 9.7 million visitors in 2019, more than the Louvre, the Eiffel Tower or the Palace of Versailles — could be a key part of that recovery.

“The park is an economic powerhouse,” the French tourism minister, Jean-Baptiste Lemoyne, said, noting that it has generated 70 billion euros, roughly $83 billion, of added value for the French economy since it opened in 1992. “There is really a whole dynamism in the eastern part of the Paris region that has arrived because of Disney,” he said. “It attracts an enormous number of foreign visitors.” 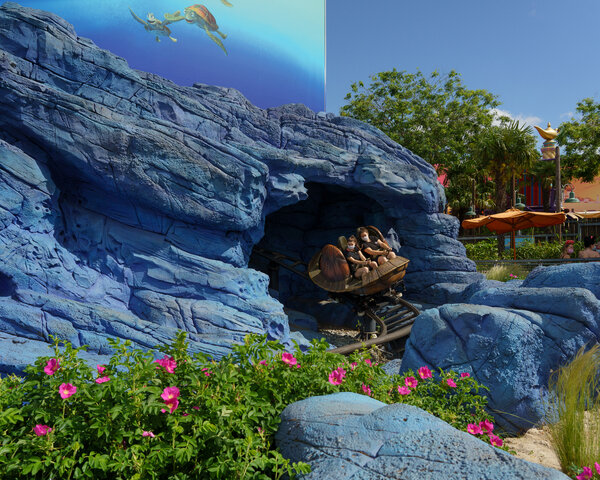 Though smaller than its counterpart in Orlando, Disneyland Paris is a huge resort, comprising two parks — the 124-acre Disneyland Park and the smaller Walt Disney Studios Park — as well as seven hotels, two convention centers, a golf course and a major railway hub. But Disney’s impact extends well beyond the resort’s borders. Since the company arrived in the area, which lies about 20 miles east of central Paris, the region’s beet and potato fields have transformed into the fast-growing region of Val d’Europe, home to a major shopping center, an international business park and a population of more than 35,000.

Many of those residents are Disney employees. Before the pandemic, Disneyland Paris had some 17,000 “cast members,” making it the largest single-site employer in France. And despite the resort’s nearly 12 months of closure since the beginning of the pandemic — it reopened from mid-July through October 2020, when France’s second wave of Covid infections again forced it to close — most of those employees are still in their jobs.

“We negotiated with the company, and we didn’t have any layoffs,” said Djamila Ouaz, the head of CFDT Disney, the largest union of Disneyland Paris workers. She added that about a thousand workers had opted for buyout packages but said that all were taken voluntarily. Many of the remaining employees received unemployment benefits, she said, with their salaries supported by the French government.

Since the pandemic hit, France has spent 30 billion euros propping up its tourism sector, said Mr. Lemoyne, the tourism minister. The country has a vested interest in the success of the Disneyland Paris resort, which indirectly supports tens of thousands of jobs beyond the parks’ borders and generates more than six percent of France’s total income from tourism. When the resort celebrated its 25th anniversary in 2017, François Hollande, the French president at the time, showed up to give the keynote speech.

Such a scenario would have been hard to imagine on the eve of the resort’s opening in April 1992, when the idea of Mickey Mouse coming to the outskirts of Paris inspired sneers from many French elite. The theater director Ariane Mnouchkine famously described the resort as “a cultural Chernobyl,” while the writer Jean Cau, writing in Le Figaro, called it “a cancerous growth” that “will irradiate millions of children (not to mention their parents).”

The company may have been sensitive to such critiques, because Disney borrowed heavily and poured vast amounts of money into the park’s construction.

“They had this notion that the French needed something beyond the fiberglass parks that they had built in America and Japan, so they built a lavish resort that forced them to take on a lot of debt right from the start,” said Mark Havel, the author of “The Story of Disneyland Paris.” “Repaying that debt was always going to be difficult.”

Difficult indeed. The official opening in April 1992 was marred by a rail strike, chilly weather, underwhelming visitor numbers and the bombing of a nearby power pylon that briefly cut power to the resort’s hotels (“an apparent act of sabotage,” according to The Orlando Sentinel). The then-French president, François Mitterrand, skipped the opening and said on French television that the resort was “not exactly [his] cup of tea.” Guests complained about the lack of wine and beer in the restaurants. (The policy was changed the following year.) And two months after the opening, tractor-driving French farmers blockaded the entrance to the resort’s main parking lot to protest American policies on agricultural trade. (Local police did nothing to stop them, The Los Angeles Times reported.)

All the bad press added up, and visitor numbers remained lower than expected. So much so that, less than two years after the opening of the resort — which was then known as Euro Disney — Michael Eisner, then chairman and chief executive of the parent Walt Disney Company, told a French news magazine: “anything is possible today, including closure.”

But the resort hung on. In 1994, the name Euro Disney was scrapped for the more romantic-sounding Disneyland Paris. The resort’s heavily indebted French owner, Euro Disney S.C.A., also restructured its agreement with the parent, Walt Disney Company, allowing the smaller firm to retain more of the resort’s profits. In 1995, Disneyland Paris unveiled its distinctly European version of the Space Mountain attraction, with details inspired by the science fiction novels of the French writer Jules Verne. A few months later, Euro Disney S.C.A. reported its first yearly profit.

But still, visitor numbers failed to grow as quickly as hoped, and the resort’s early debt continued to weigh it down. So much so that, in 2014, the Walt Disney Company announced a one-billion-euro bailout of Disneyland Paris. Three years later, the U.S. parent bought more than 97 percent of the shares of Euro Disney S.C.A., effectively taking over the company.

Meanwhile, Mickey and Minnie continued to entertain — and gain a following in Europe. Before the pandemic, 44 percent of the park’s visitors were French, with most of the rest coming from Britain, Spain, Belgium, the Netherlands and elsewhere on the Continent. In 2019, the main Disneyland Park attracted more than 9.7 million visitors, while the adjacent Walt Disney Studios Park — which opened in 2002 — drew more than 5.2 million. The numbers are much smaller than those for Disney’s resorts in Florida and California, and the 2019 figure for the main Disneyland Paris park was down roughly 13 percent from 2012, when 11.2 million people visited. But the figures are still high enough to make Disneyland Paris by far the most popular theme park in Europe.

With France having eased its restrictions on tourist arrivals from many of the resort’s most important sources of visitors, Disneyland Paris could have a busy summer. But because the resort is restricting attendance to allow for more spacing among guests, it may be a while before it gets back to those prepandemic visitor numbers.

Limited capacity isn’t the only change. Guests must now reserve their tickets in advance online. (As of the reopening date, there was plenty of availability, with a one-day dated ticket in June starting at 45 euros for an adult or child over 3; the same ticket in July or August costs 69 euros. There is no charge for children under 3.) Plexiglass barriers have been installed in waiting areas and on rides. Cast members walk around carrying “one meter” signs to remind people to keep their distance, and some 2,000 hand sanitizing stations have been installed. Socially distanced selfie spots have been set up, allowing guests to take photos with Disney characters without getting too close. And, despite France’s recent lifting of its mask requirement in most outdoor settings, at Disneyland Paris, everyone 6 and over is still obliged to wear a mask. The resort’s health protocols were developed with the government, Disney officials said, and will be adjusted as the public health situation evolves.

With France now open to tourists from the United States, many Americans may be among those who return to the resort this summer. Anyone familiar with the Disney parks in Florida and California can expect to find a lot of the same attractions in Disneyland Paris, but with a European twist, said Kat Mokrynski, an American who had an annual pass to Disneyland Paris while she was studying at the French university Sciences Po.

“Even though it might be smaller than the other parks, its detail is the best by far. It’s just stunning,” she said.

New ‘lands’ and a spruced-up castle

In a few years, there will be even more rides and attractions. The resort is undertaking its first major expansion in nearly two decades, thanks to a two-billion-euro investment from the Walt Disney Company. The expansion is expected to include a new “Avengers Campus” at Walt Disney Studios Park, as well as new “lands” devoted to “Frozen” and “Star Wars.” Meanwhile, the towering pink castle that lies at the heart of the main park is undergoing a renovation; the detailed work is being conducted by Le Bras Frères, the same firm that has been hired to restore the spire of Notre Dame Cathedral.

Those kinds of culturally sensitive decisions have gone a long way to quell any remaining disquiet about the resort among the French, said Ben Rossignol, who manages the Twitter feed of the DLP Report, a fan-run source of photos and updates about Disneyland Paris. But they’ve also just gotten used to it.

“French people have a love-hate relationship with American culture,” said Mr. Rossignol, a Frenchman who lived for several years in the United States and who now works in London. “But I think once people got to know the park, those early outrages died down because people realized that this is fun and this is beautiful and a lot of work is going into it,” he said, adding that the resort’s first generation of fans are now returning with their own children in tow.

Sara Gassen, 36, is one for whom the Disney love has already lasted for decades. Ms. Gassen first visited in 1992, and she has been back “hundreds of times” since. She and her sister, Petra, 48, traveled from their home near Cologne, Germany, for the reopening, which they attended in coordinated Minnie Mouse-inspired outfits.

“The feeling is the same,” Ms. Gassen said the day after the reopening, standing near the faux-Moroccan archway that marks the entrance to Adventureland. “It’s like coming home to family.”