Think a visit to the Maldives would be boring? Think again: From spectacular marine life to an underwater restaurant, inside two luxury resorts in the archipelago guaranteed to thrill

Some people fear a holiday in the Maldives might be boring. They must be blasé — or unaware of what lies beneath that vast turquoise expanse of sea.

Sitting in the overwater spa at Anantara Kihavah, I watch stingrays gliding through the shallows — and a short swim from the shore, the reef teems with healthy corals and kaleidoscopic fish.

At one point, I’m engulfed in a wave of electric blue lunar fusiliers — perhaps fleeing the black-tip sharks that patrol the nether side of the reef. 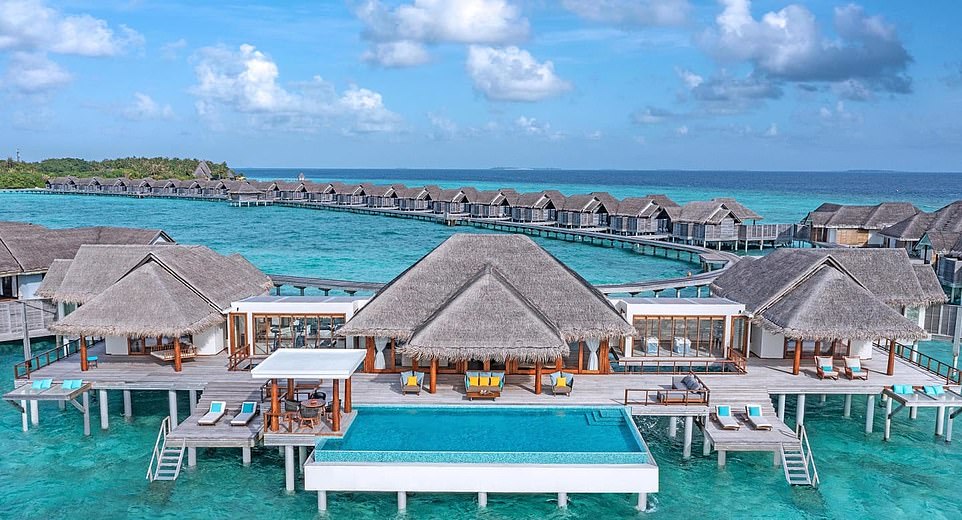 Teresa checked into Anantara Kihavah, where her friends stayed in the largest two-bedroom villa in the Maldives (above) 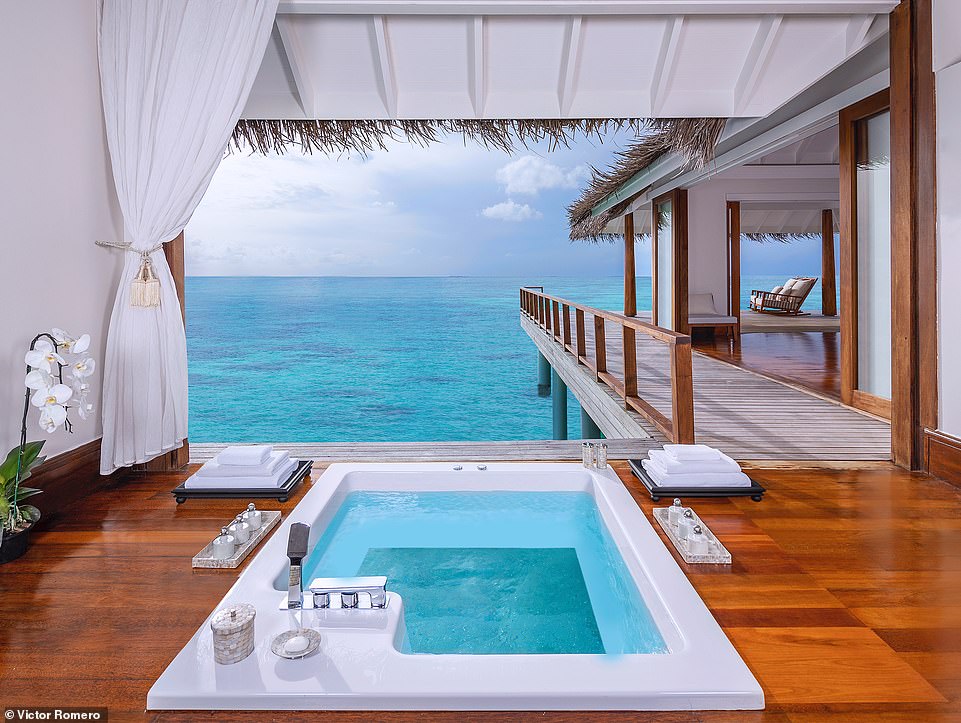 Teresa’s friends invited her over for a sushi lunch at their vast villa (above). They ate while suspended in nets cantilevered above the ocean

Anantara Kihavah is an island resort in the Baa Atoll, some 35 minutes by seaplane from Malé. It has 80 villas spread across the beach and over water, including two-bedroom residences that are ideal for families.

Like many of the now hundreds of pricey resorts in this part of the world, this one claims to have unique offerings — an over-water observatory offering stargazing sessions and the best wine cellar in the Maldives, with 450 labels from 17 countries. And the cellar just happens to be underwater.

I was with a small group of friends, two of whom were sharing the largest two-bedroom villa in the Maldives.

They asked us over for a lunch of sushi, which we ate not in their vast living room, but suspended in nets cantilevered from their deck above the ocean, buffeted by the breeze. We responded with a candle-lit barbecue at our villa — barefoot in the sand and cocooned behind a wall of beach foliage — a short cycle ride away. 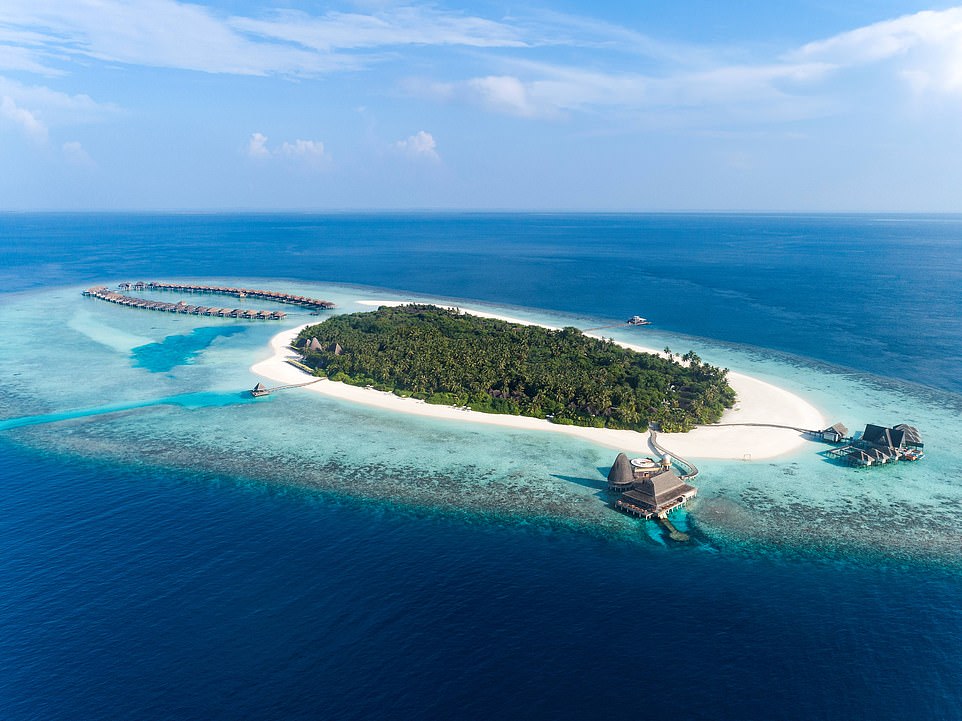 Anantara Kihavah (above) is an island resort in the Baa Atoll, some 35 minutes by seaplane from Male

With such turbo-powered room service, entertaining has never been easier.

One morning, we took a speedboat to Kudarikilu Island in search of hawksbill turtles — and found three, grazing on soft corals. These gentle creatures are so clumsy on land yet so agile in water.

They have a lugubrious expression — small wonder, given their endangered status.

Joyful spinner dolphins were the antithesis of the wary turtles, some 50 of them rocketing out of the surrounding water and performing backflips, to wild applause from our small party on board.

At dusk, while honeymooners were enjoying romantic sundowners, I tried my hand at fishing Maldivian style — out at sea, with a simple hand line, baited with mackerel. The technique is anything but simple. 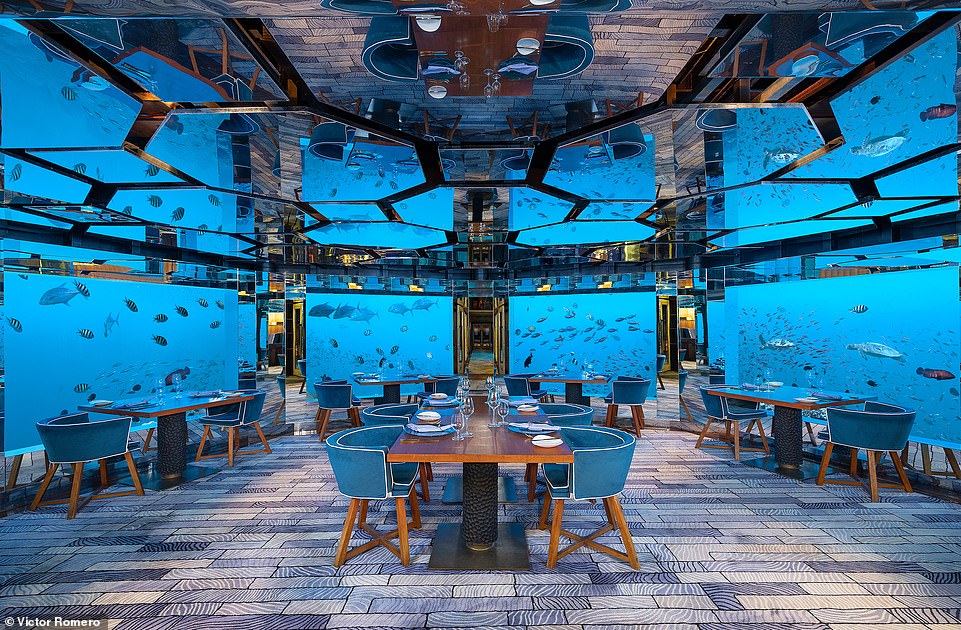 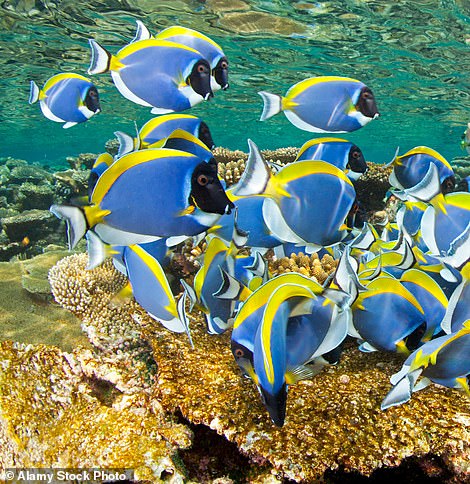 Teresa writes: ‘Some people fear a holiday in the Maldives might be boring. They must be blasé — or unaware of what lies beneath that vast turquoise expanse of sea.’ Above are surgeonfish swimming over a reef in the Maldives

On feeling a pull, you wait a few seconds, then sharply tug the line, and haul 20 metres of line, hand over fist, as fast as you can. It’s all in the timing — too soon, and the fish escapes; too late, and he eats your bait and escapes.

Again and again, I mistook the drag of the current for a nibble (a rookie error) before finally catching something heavy: a humpback snapper, as it turned out, with a shark attached.

The shark, protected creature, was thrown back; the snapper was less fortunate. He became lunch the next day.

Some guests prefer to spend days lazing on the white sands, surveying sea-life from the deck of their overwater villa, from the sky bar with a cherry-smoked negroni in hand, or through the fish-eye lens of the spectacular, underwater fine dining restaurant called Sea.

Encased in octagonal glass walls, dining on fish in the midst of their living relatives is a surreal experience, conversation punctuated by cries of ‘shark!’, ‘barracuda!’ — there one second, gone the next. Stromberg, the villain in The Spy Who Loved Me, would have been in his element.

If this sounds like too much excitement, Naladhu Private Island, just 30 minutes from Malé by speedboat, is a total contrast.

With only 20 elegantly-revamped villas, each with its own pool, beach cabana, and 24-hour bespoke service, this represents discreet fly-and-flop bliss that is not unreasonable in the context of the stratospheric prices of some other Maldivian resorts. 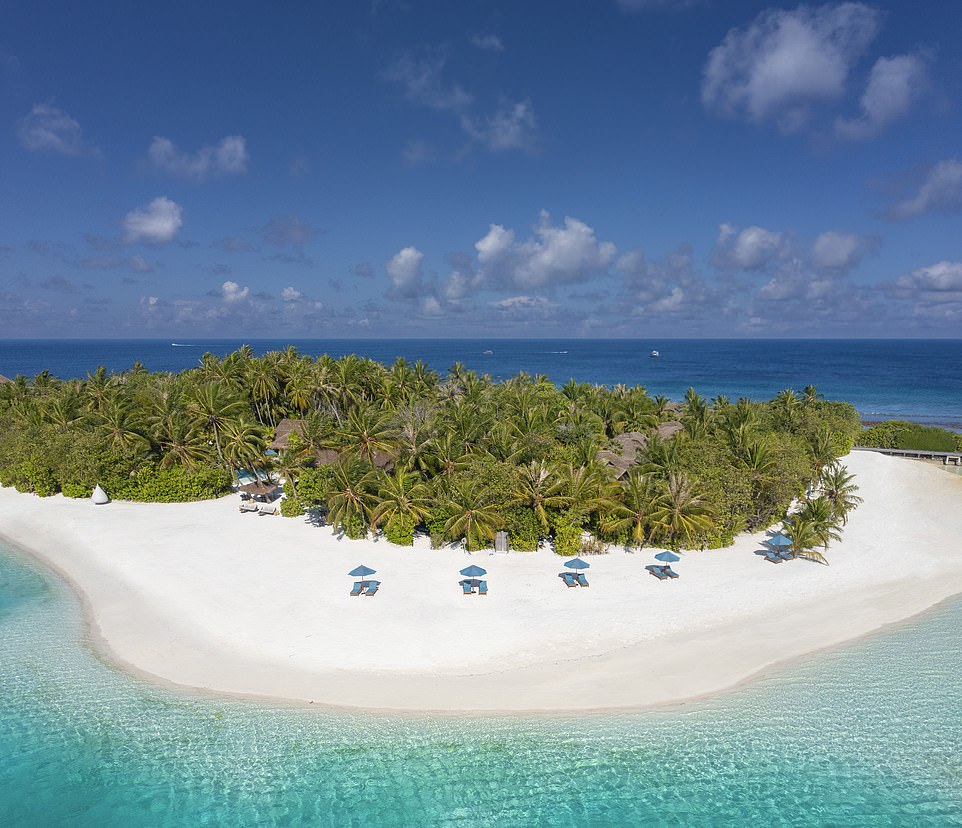 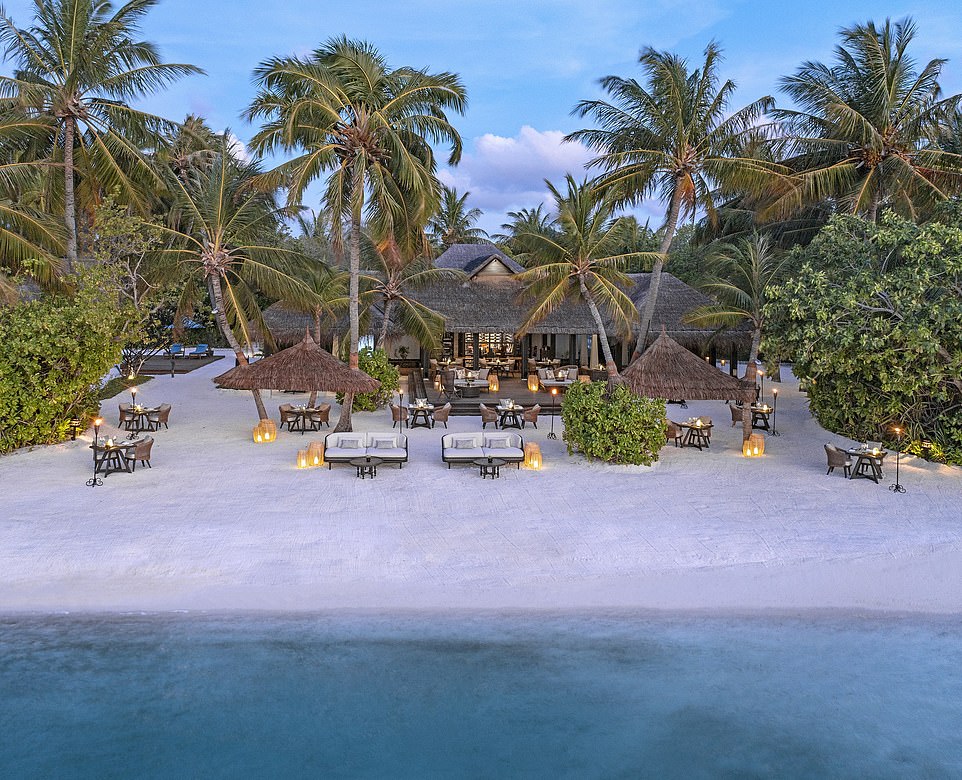 Naladhu Private Island has 20 elegantly-revamped villas, each with its own pool. And it’s just 30 minutes from Male by speedboat

Naladhu has few distractions beyond the sound of lapping waves and the insistent soundtrack of the Asian Koel — members of the cuckoo family.

I learnt of the medicinal uses of the island’s plants — leaves of rose apple for malaria, and of spider lily for insect bites, and trustingly squeezed the juice of refreshing sea plum berries into my eye.

Oh, and I swam with 3m long nurse sharks at a neighbouring atoll, losing my fear of these creatures, in the process.

Scott Dunn offers a six-night Maldives itinerary from £16,799 based on two people sharing on a B&B basis, including three nights at Naladhu Private Island staying in an ocean house with pool and three nights at Anantara Kihavah staying in an over-water pool villa, BA return flights and private transfers. See scottdunn.com or call 020 8682 5080.