The ‘bleeding crater’, peaks that look like jagged teeth and one of Europe’s biggest glaciers: Iceland’s remote and epic landscapes captured in an incredible set of pictures

Photographer Gabor Nagy spends months researching Iceland’s most eye-catching spots on Google Earth and then days driving and hiking its mountain roads to reach them – and snap them.

As his incredible pictures of the country’s epic landscape show – the graft pays off.

He has captured Europe’s second-largest glacier, a breathtaking ‘bleeding’ volcanic crater and a set of enormous rock pinnacles that look like giant teeth. 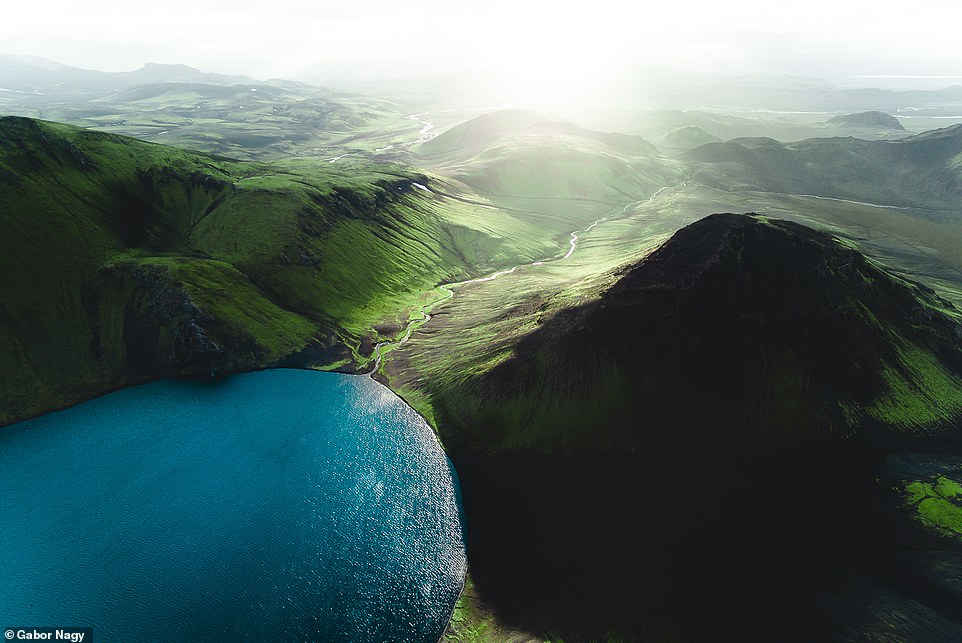 This breathtaking drone shot shows the stunning landscape of Landmannahellir, which is in the Landmannaafrettur area and named after a famous cave there. Landmannahellir is a popular base camp for hikers and horseriders exploring the area’s numerous hiking trails 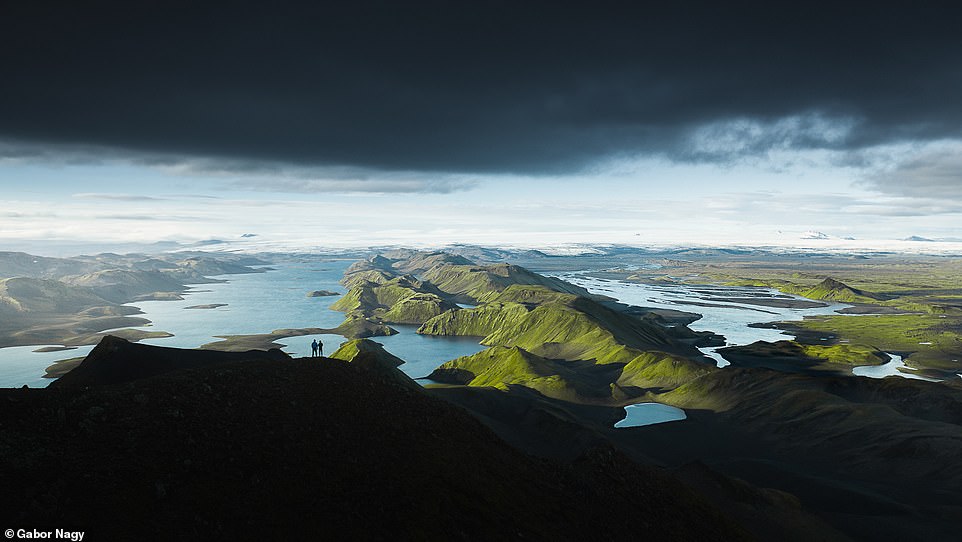 This incredible drone shot shows Langisjor – a lake in the western part of Vatnajokull National Park. It is 12 miles (20km) long and 1.2 miles (two km) wide 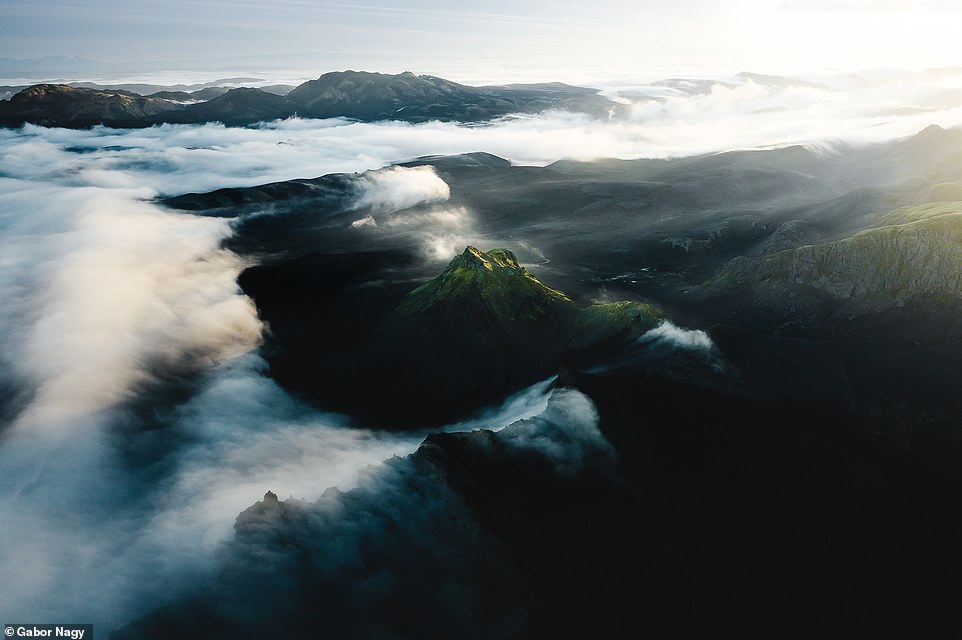 A drone image of a misty Langisjor, which reaches down 246ft (75 metres) at its deepest point. Gabor said: ‘Before my missions to Iceland, I spend months and months on Google Earth looking for new locations’ 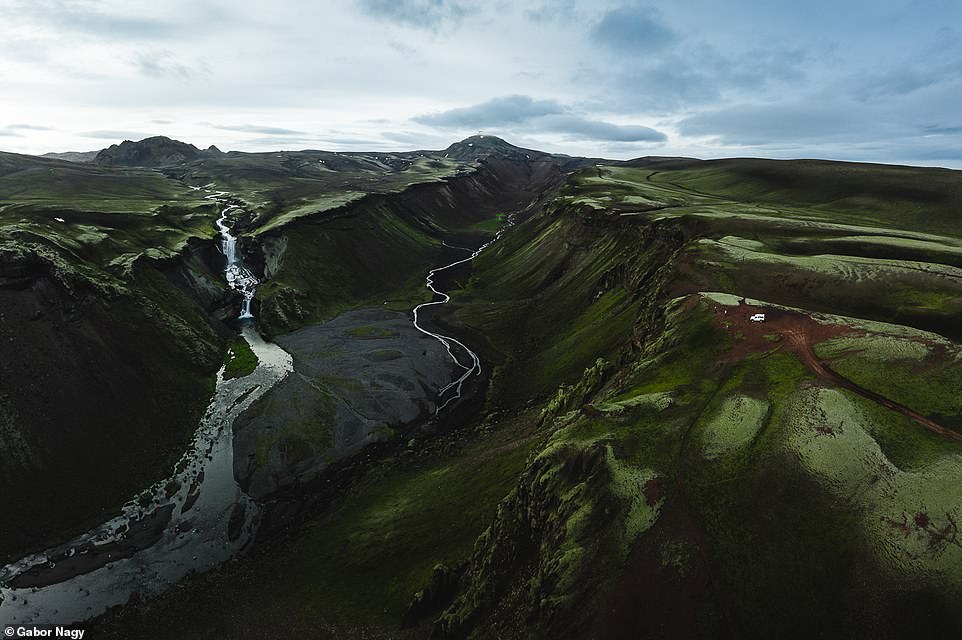 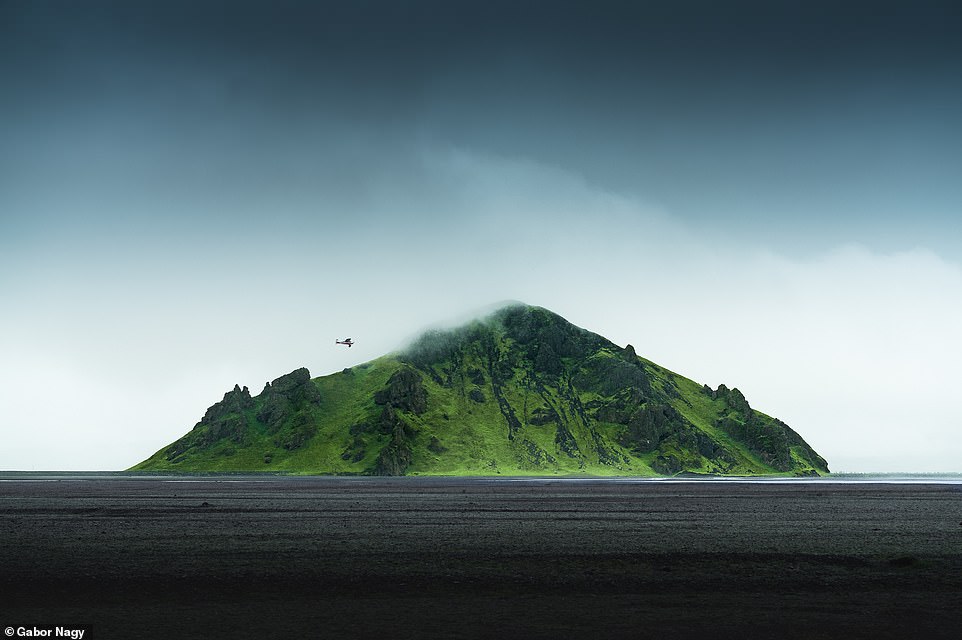 This image was taken by Gabor’s drone off the south coast of Iceland. He said: ‘It’s easy to take the pictures when you are there because you can find beauty all around you’ 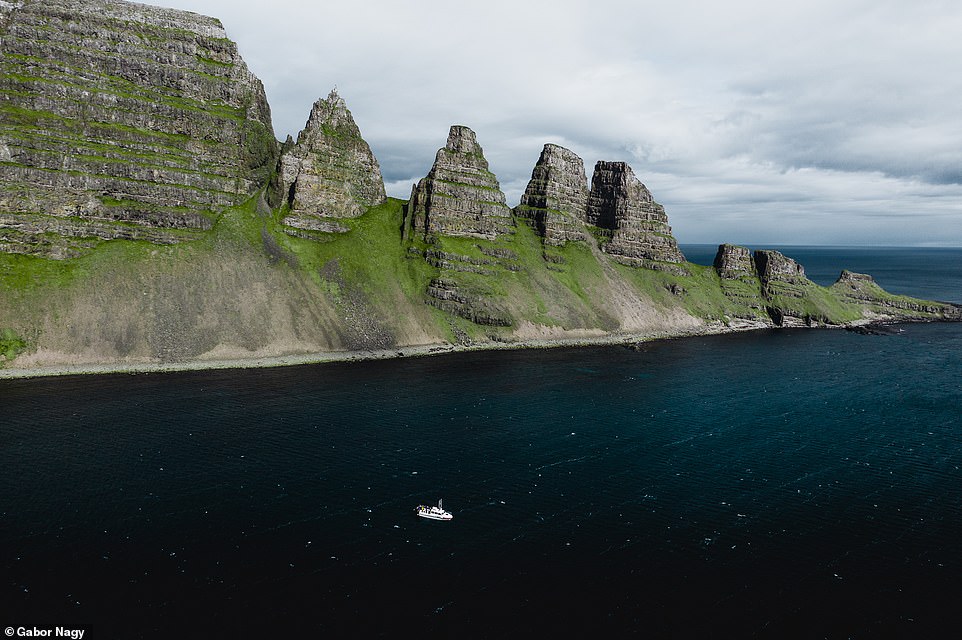 Drangaskord, pictured, is a series of seven rocky peaks that jut out into the sea in the Westfjords area of Iceland. The Westfjords tourist board describes it as ‘one of the most impressive and least-talked-about natural features in all of Iceland’

The 34-year-old, from Budapest, is in love with the country’s natural beauty and has visited Iceland seven times in the past four years, armed with his camera and drone.

Gabor revealed more to MailOnline Travel about the planning and perseverance behind his shots.

He said: ‘It’s easy to take the pictures when you are there because you can find beauty all around you.

‘But to reach those regions sometimes it’s pretty difficult. Before my missions I spend months and months on Google Earth looking for new locations and possible footpaths to reach areas, saving all the interesting patterns and shapes I find on my GPS.

‘These locations are super remote and I usually have to drive, hike and cross several glacier rivers to reach them. 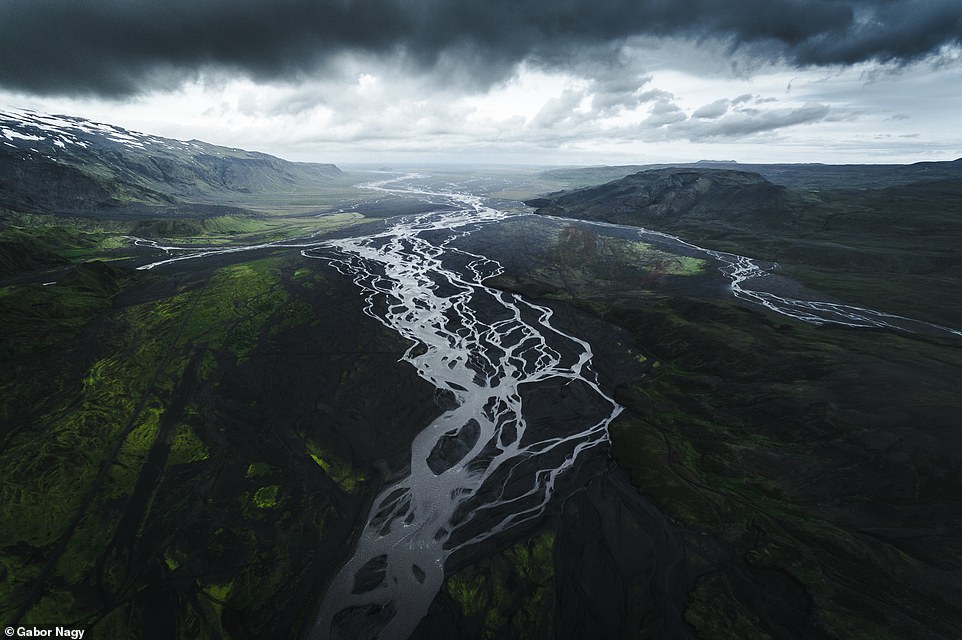 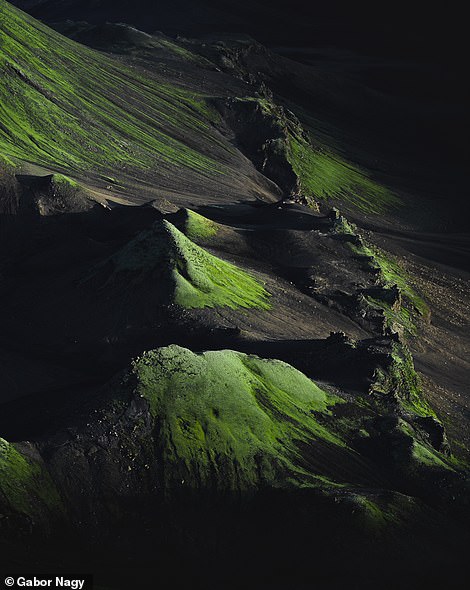 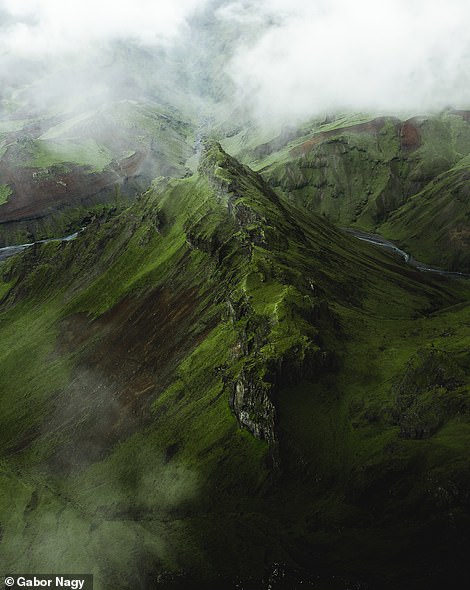 On the left is a spectacular picture of the Sveinstindur mountain, which is 3,408ft (1,093 metres) high. Right is a breathtaking image Gabor took with his drone at the Thakgil campsite, which is located in a beautiful valley surrounded by mountains 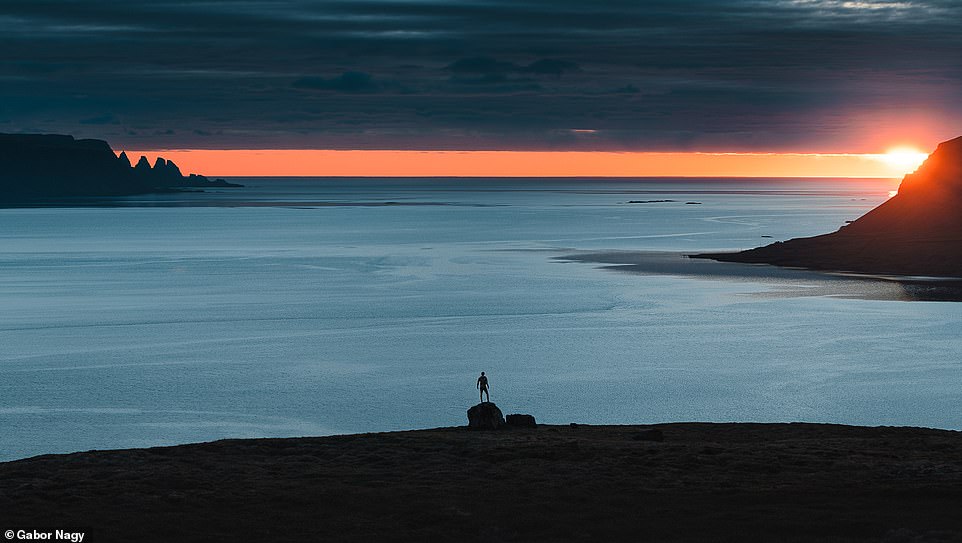 Gabor, who is a full-time photographer and advertising creative, first visited Iceland in 2016 and prefers visiting the country in the summer months. He captured this scene in Westfjord  – a large peninsula that covers an area of 8,599 square miles (22,271 square kilometres) 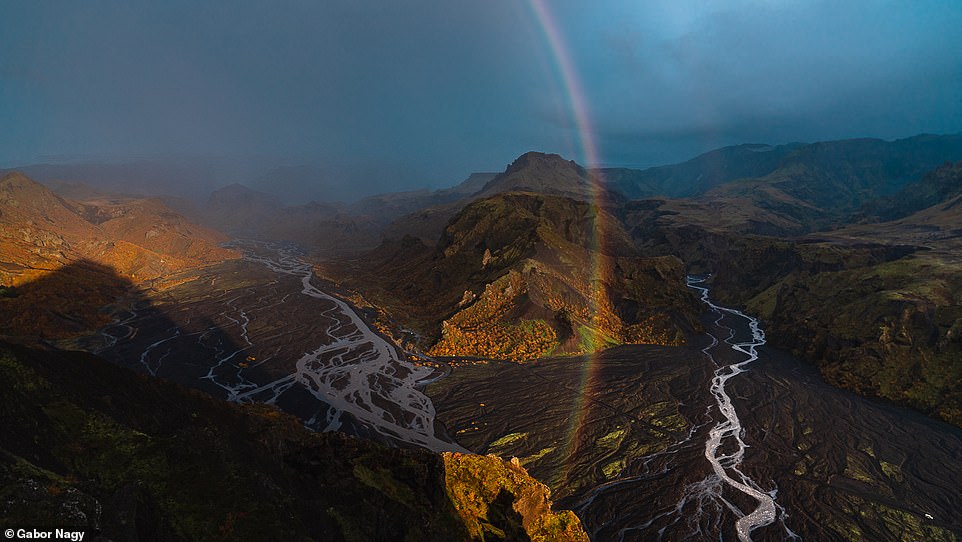 Gabor hiked along the Thorsmork mountain ridge and managed to snap this beautiful image as a rainbow loomed. The ridge is nestled between three glaciers – Eyjafjallajokull, Myrdalsjokull and Tindfjallajokull 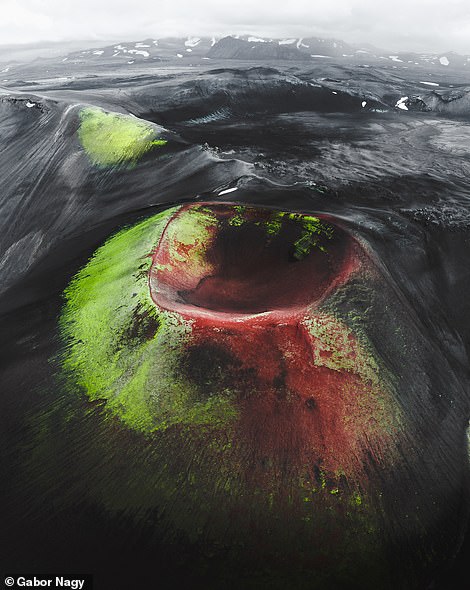 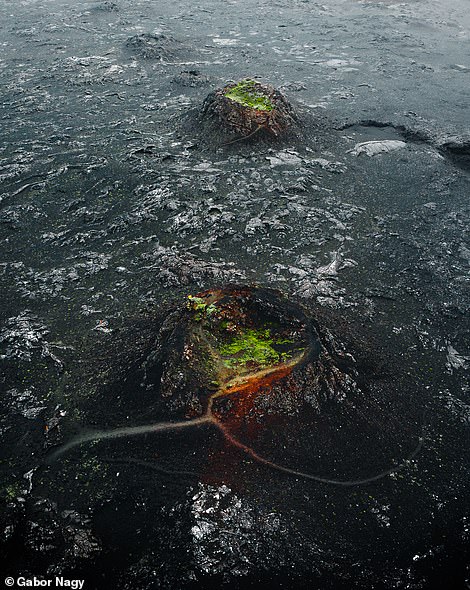 On the left is a drone image Gabor calls ‘the bleeding crater’, which he snapped in the Icelandic Highlands. Right is a spectacular image of the Stampar crater series in the south-west of the country, which stretches for 2.4 miles (four km)

‘I also have to understand the signs of the weather because it can change pretty rapidly out there.

‘But it’s always good to finally see these extraordinary places with my own eyes after all the preparations and travel.’

Gabor, who is a full-time photographer and advertising creative, first visited Iceland in 2016 and prefers travelling to the country in the summer months. 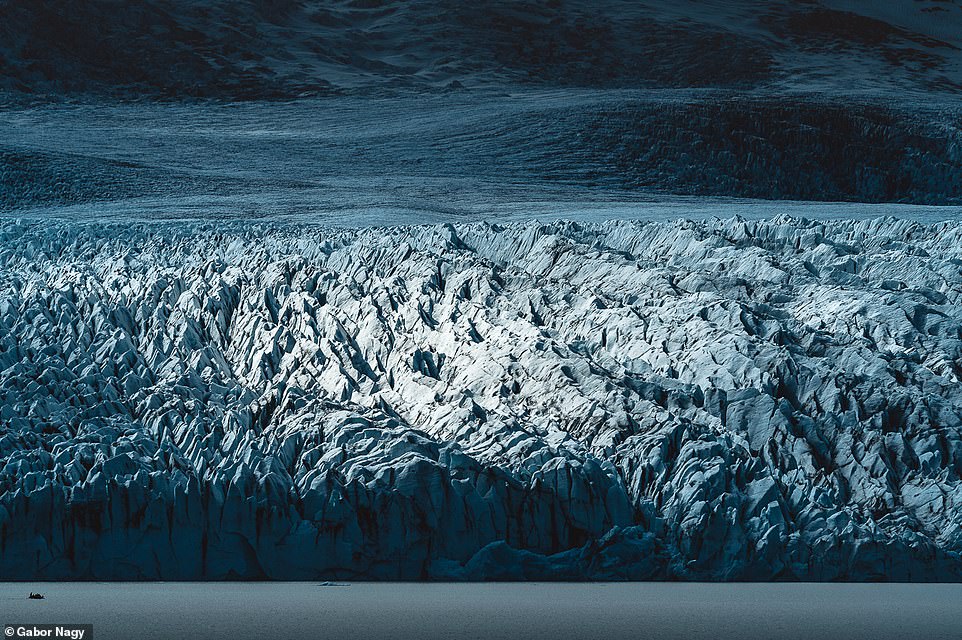 The mighty Vatnajokull glacier – which at 3,127 square miles (8,100 square kilometres) is the second largest in Europe, trumped in size only by the Severny Island ice cap. It covers eight per cent of Iceland’s landmass and conceals the country’s tallest mountain – which is 7,218ft tall – and several volcanoes. In the foreground is the Fjallsarlon iceberg lagoon 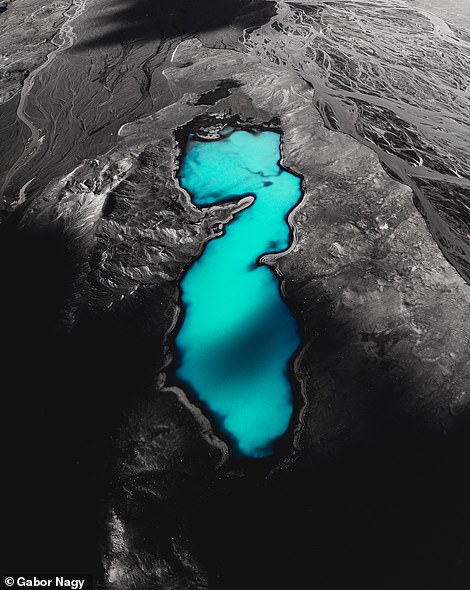 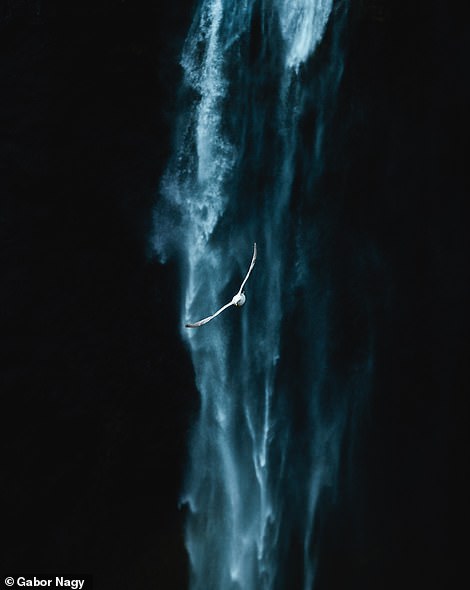 On the left is an incredible drone shot that was snapped in the Highlands of Iceland, which is mostly an uninhabitable volcanic desert. Right is a scene on Iceland’s south coast 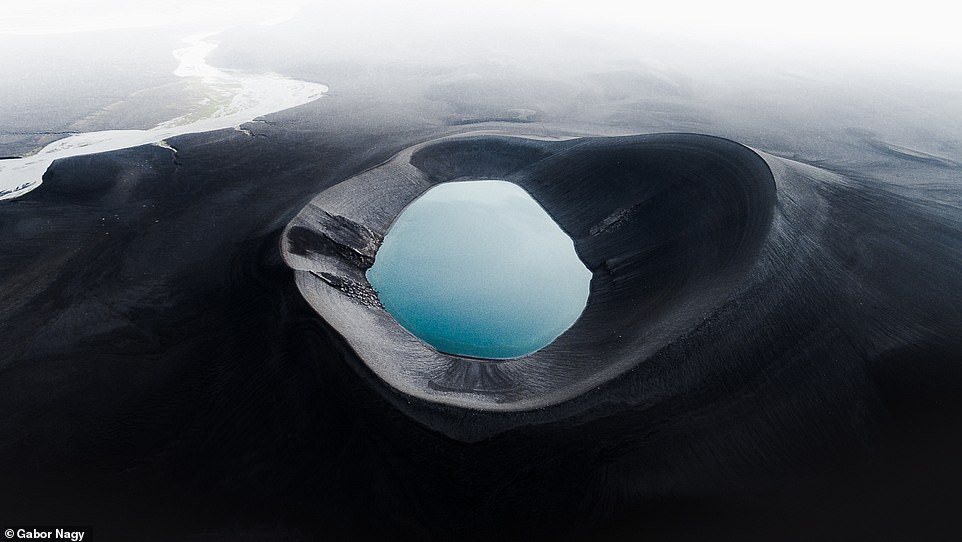 This drone shot was captured in Iceland’s Highlands, which can be crossed only during the Icelandic summer when the roads are open

He explained: ‘I’m always gravitating to the mystical Highlands and the central part of Iceland, which can be visited only in the summer when the mountain roads are open.

‘Another region where I’ve spent a lot of time during the years is the Westfjords.

‘Every summer I just wait to touchdown at Keflavík Airport to finally admire the natural beauty of the country again – and it’s never disappointed me, ever. 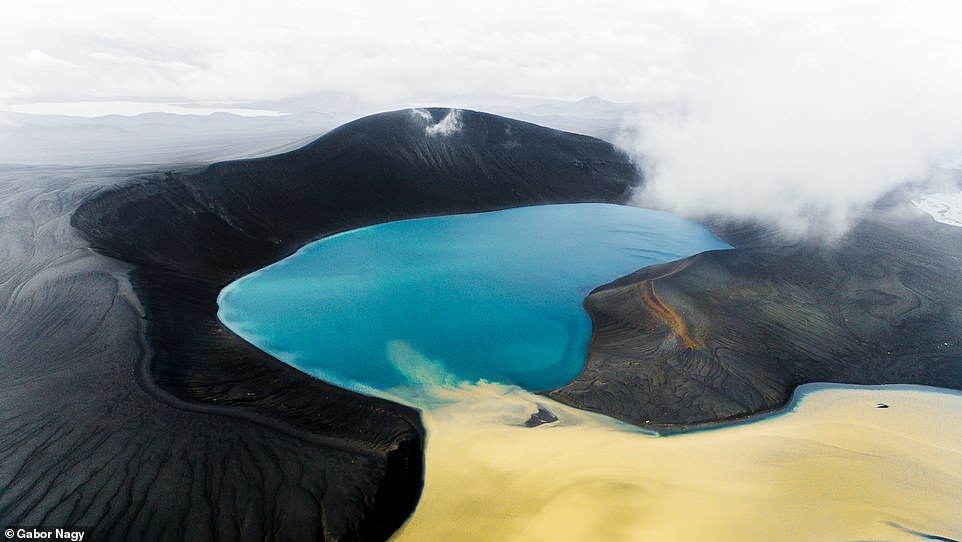 Gabor said: ‘These locations are super remote and I usually have to drive, hike and cross several glacier rivers to reach them.’ Pictured is a natural hot pool in the Highlands of Iceland 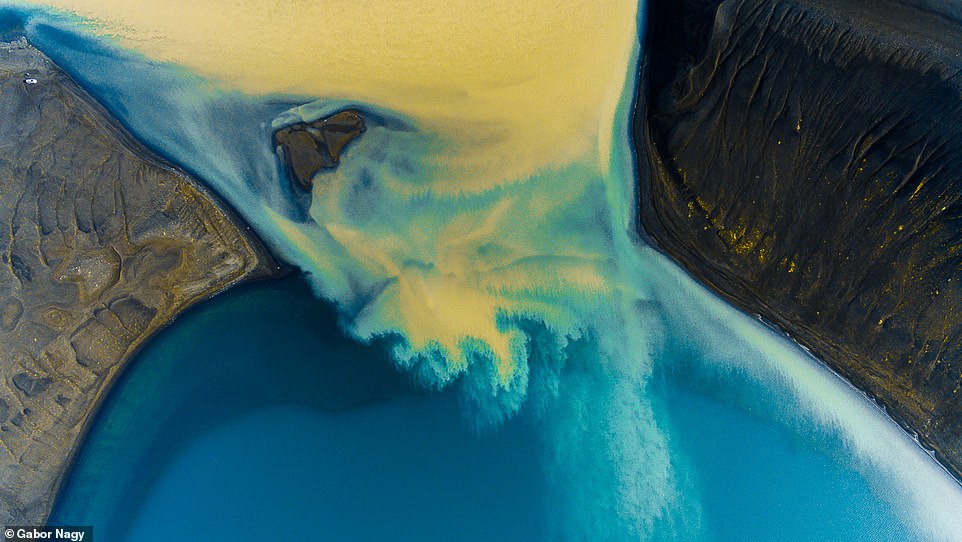 Although Gabor uses a drone, he much prefers to use a camera at ground-level. He explained: ‘I love being in the mountains so I’d rather climb up high peaks and use my cameras from there instead of just sending up a drone from the parking lot and finishing shooting in literally five minutes.’ Pictured is a scene in the Highlands of Iceland 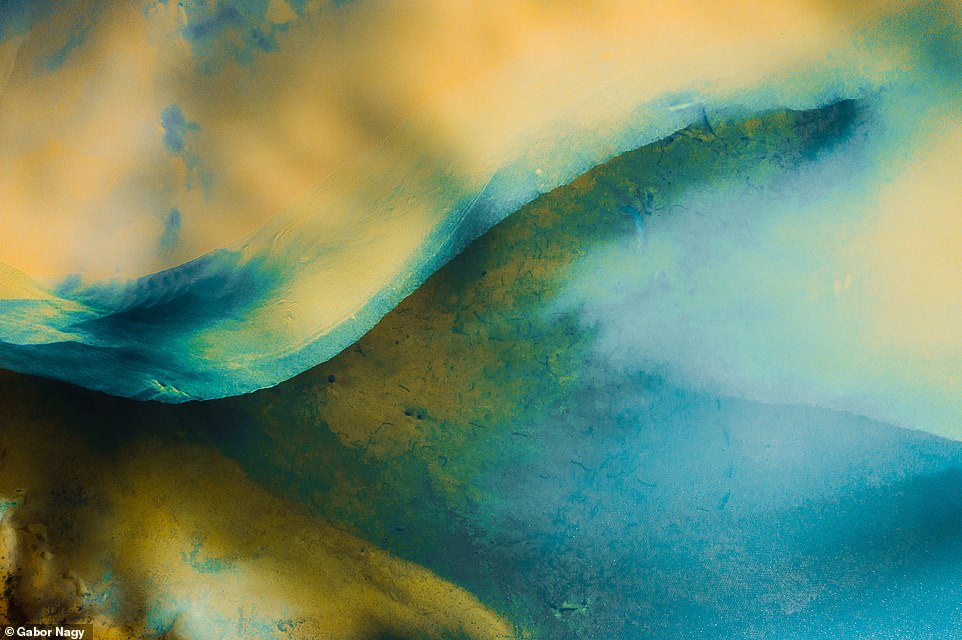 An other-worldly drone image showing Landmannalaugar, which is known for its natural geothermal hot springs 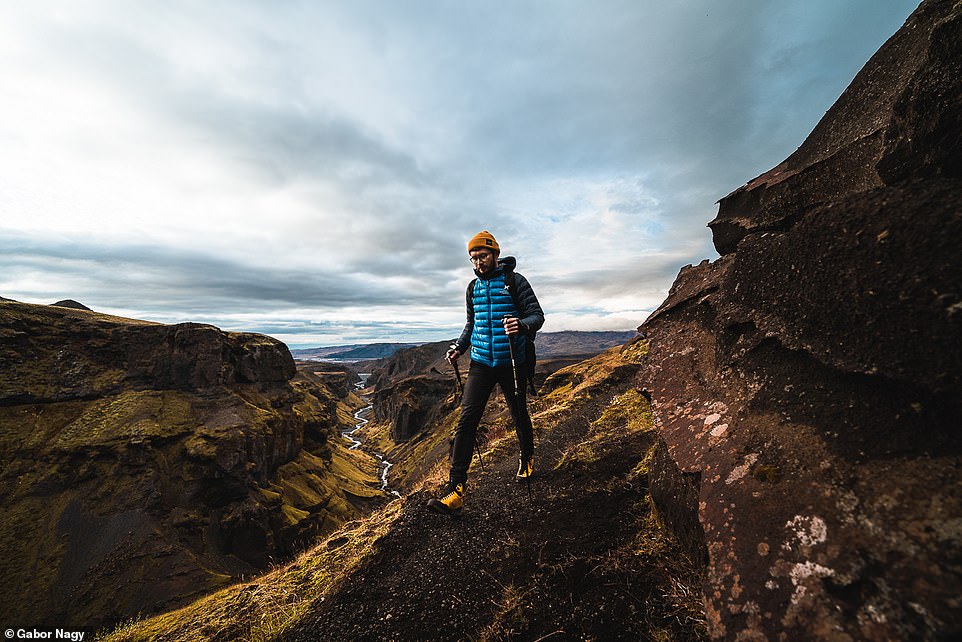 Gabor trekking through the Thorsmork ridge. He explained: ‘The beauty of Thorsmork’s mountains, glaciers, wild glacial rivers and narrow valleys showed me something entirely different than the mountains I’m used to seeing in Europe over the past 20 years’

‘As an Eastern European kid, I was always fascinated by the endless summer nights of the Arctic, when the sunsets are three hours long and the blue hour is just a continuous deep trip of freedom, silence and loneliness.

‘So I tried to spend as much time as I can in Iceland during the summer months to experience these feelings in full.’