If this is camping, count me in! Plush duvets, candle-powered chandeliers – life under canvas on the south Devon coast is as sweet as toasted marshmallows

As the sun sets beneath Start Bay, with a pinkness to match the first glass of rosé — and, yes, marshmallows toasting over an open fire — I finally feel that all is well with the world.

Never has a short break felt sweeter than the few days we have just spent ‘camping’ on the south Devon coast, cocooned in a world where we never gave a moment’s thought to social distancing.

That’s because the next-door tent is scarcely within shouting distance, let alone two metres. Not that this is your average tent. 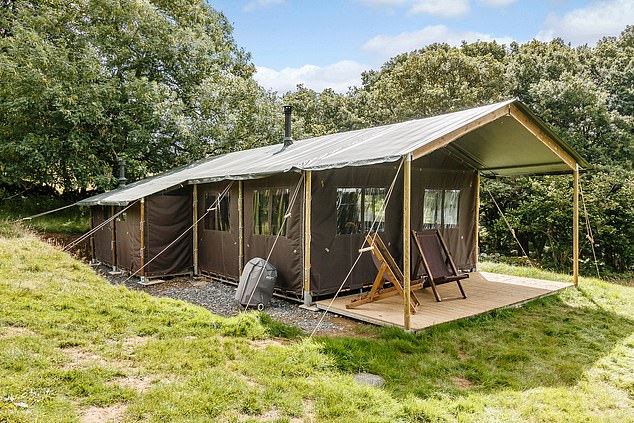 A Feather Down Farms safari-style canvas lodge. They can be found in quiet corners of bona fide working farms

We booked via Feather Down Farms, the ‘glamping’ experts who have made life under canvas about as civilised as possible, without losing the magic of frying your own breakfast in the middle of nowhere.

We had plumped for a setting every bit as delightful as its name suggests: Fountain Violet Farm — which sounds like something out of a Thomas Hardy novel. It is the Jones family’s 110-acre mixed livestock farm, which slopes right down to the sea and is a short walk from the village of Kingswear, at the mouth of the River Dart.

At Fountain Violet, you don’t look out on another soul — except those in passing boats. There are four Canvas Frills Lodges, as Feather Down calls them, spread far apart around a six-acre field.

Built on wooden decks (which keep everything dry in all weathers), these each have a large veranda with a picnic table facing acres of grass and out to sea. 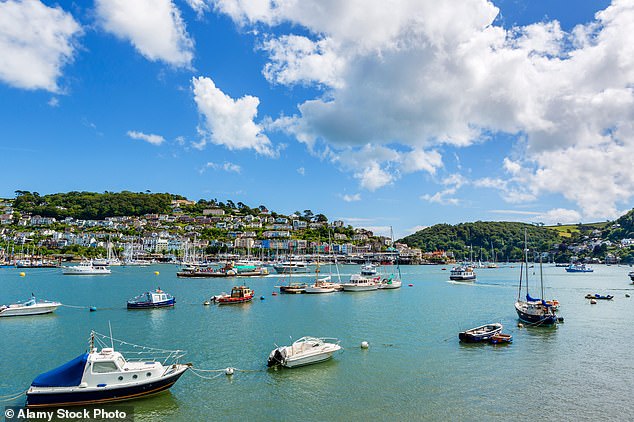 Robert and his family stayed at Fountain Violet Farm, which slopes right down to the sea and is a short walk from the village of Kingswear, at the mouth of the River Dart, pictured

Inside, each tent has a large living area with a dining table, sofa and candle-powered chandelier built around a wood-burning stove, plus kitchen cupboards and a sink.

Behind is a double bedroom, a bunk bedroom and — best of all as far as our children were concerned — a Feather Down ‘cupboard bed’. This is a raised double bed with wood-slat double doors above a huge storage area. With thick duvets and pillows supplied as standard, it’s proper snug-as-a-bug stuff.

Each night, after supper, our three (aged 13, 11 and eight) can’t wait to put on their pyjamas and pile in under the duvet, doors closed, to watch a film on the iPad. ‘It’s our cinema,’ they cry. ‘No adults allowed.’

In my view, the best thing is the ensuite bathroom with flushing loo and a decent shower, providing masses of hot water courtesy of a gas canister hidden around the back of the tent.

There is also a gas-powered camping cooker outside (for those who don’t want to wait for the stove to heat up before breakfast) and a barbecue. 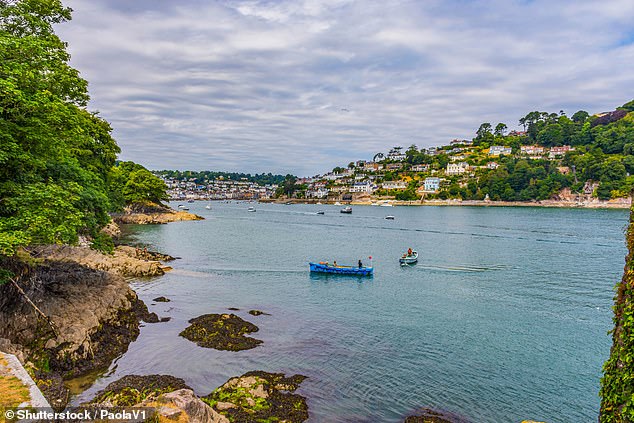 Robert and his family took the ferry to Dartmouth, pictured, where they enjoyed fudge and ice cream

Purists might argue that this is not real camping, but who cares? It’s camping as it should be.

It also means that every lodge is completely self-sufficient; no shared loos, taps or eating areas — handy in the new Covid-19 era.

The only shared facility, tucked away in a fold in the hill, is a hut with an honesty shop for basic supplies, electric charging points and a freezer full of free ice packs for refilling the cold box fridge in the tent.

Every day, the farmer, Edward Jones, and his family drop by with extra wood for the stove and help with any questions. All we need are directions to the best beach.

A 20-minute walk via a couple of fields and a public footpath brings us to near-deserted Mill Bay Cove, an enchanting part-sand, part-shingle beach with luminously blue water.

One day, my lot go in with wetsuits (advisable for longer swims round to a mysterious cave), the next without.

Away from the beach, we walk down to Kingswear and take the ferry over to Dartmouth for fudge and ice creams. 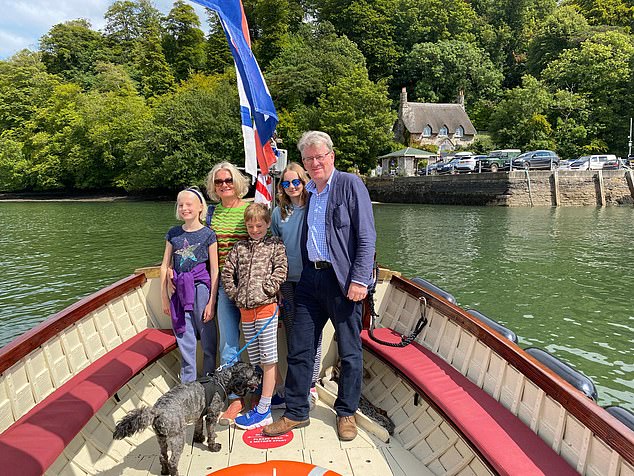 Robert with his family. He says Fountain Violet Farm was every bit as delightful as its name suggests

Feather Down Farms (featherdown.co.uk, 01420 80804) offers family-sized canvas lodges (all have toilets, some have showers) for two nights from £199.

Another day, we drive a few miles to Agatha Christie’s splendid home, Greenway, now run by the National Trust. Though the house itself is still closed, it has fabulously atmospheric grounds, with paths through extensive woods to the walled garden, the tennis court and the riverside boathouse (where the queen of crime set the murder in Dead Man’s Folly).

We walk down to a nearby quayside and ring the bell for the ferry across the Dart to the little village of Dittisham. The popular Anchorstone Cafe is fully booked, so we order takeaway fish and chips (some of the best I can recall) and, naturally, eat them sitting on the sea wall.

So much of our adventure feels like something out of a novel from yesteryear.

Every now and then, we hear the toot of a train on the Dartmouth Steam Railway, chuffing its way up the beautiful Dart valley from Kingswear to Paignton (via Churston, where Dame Agatha bumped off another victim in The ABC Murders).

Had we another day, we would jump aboard for a visit to see the big cats and giant tortoises at Paignton’s famous zoo. Next time, perhaps.

In fact, the children liked nothing more than simply messing around back at Fountain Violet Farm until the last of the marshmallows had melted, and it was time for bed.